When I think back to the games I played as a child, many come to mind. Boggle was a family favorite, as was Yahtzee. We had other classics like Chutes & Ladders, Monopoly and Life. Each one was a different type of game, so we could pull out one that fit the mood we were in. Oddly though, we had two that were quite similar: Clue and 221B Baker Street.

I think everyone in the world has played Clue at some point, but the 221B Baker Street was a little more obscure. The premise was still the same – solve the crime before your opponents did. This one had you assuming the character of Sherlock Holmes (who famously lived at the fictional UK address of 221B Baker Street), searching out clues and eventually deducing the correct solution. When given the choice, we would always choose 221B over the mass-marketed Clue. 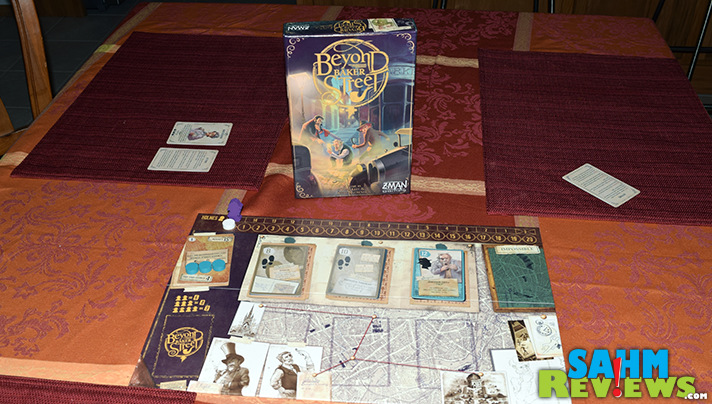 This year Z-Man Games introduced Beyond Baker Street, also set in the imaginary world of Sherlock Holmes. Instead of playing as the great detective yourself, you and your opponents must compete against him to solve the crime quicker than he can! And since we are huge fans of any kind of cooperative game (and considering my fondness for 221B Baker Street) we couldn’t wait to get it to the table. 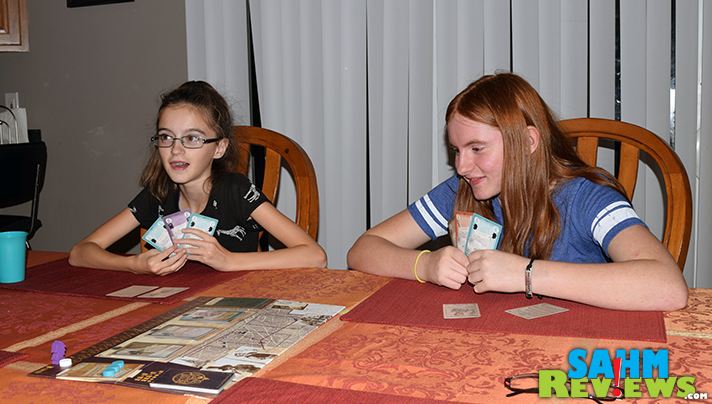 If you’ve ever played the card game, Hanabi, then you already understand how Beyond Baker Street works. Each player is dealt a hand of four cards, but instead of looking at them, they hold them backwards so only their teammates can see what they hold. To win, you must solve the crime under a very particular set of circumstances – the final Lead (clue) is confirmed AND the players’ token on the Investigation track is maxed out on 20. 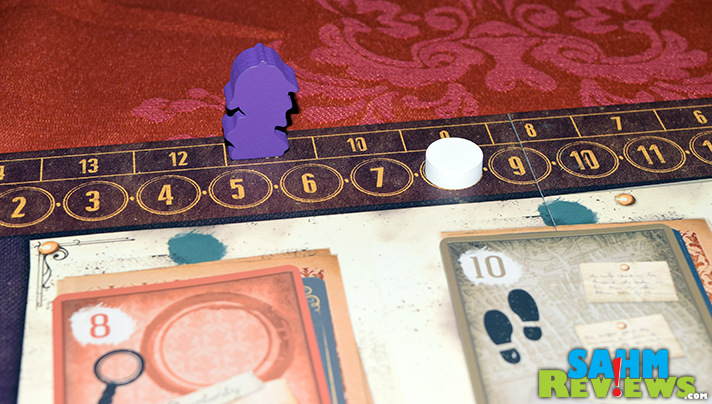 However, there are multiple ways to lose the game! If Sherlock’s marker gets to zero, he solves the crime and wins the game. If your investigation marker exceeds 20, the last Lead card is discarded or the final Lead is confirmed before your track is at 20 are also other likely ways of failing to solve the puzzle as a team. 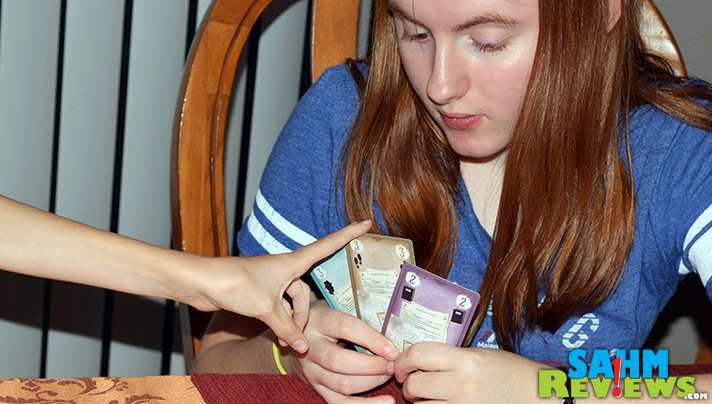 On each players’ turn they have a couple options of actions to choose from. Most commonly you will “Assist”, meaning you give another player one piece of information about what they have in their hand. You might tell them they have X number of a certain type of card (denoted both with color and iconography) or your clue could possibly be about the numbers on the cards. It is up to them to remember and react to this information when their turn comes around. When giving information, Sherlock moves up one space on his track. 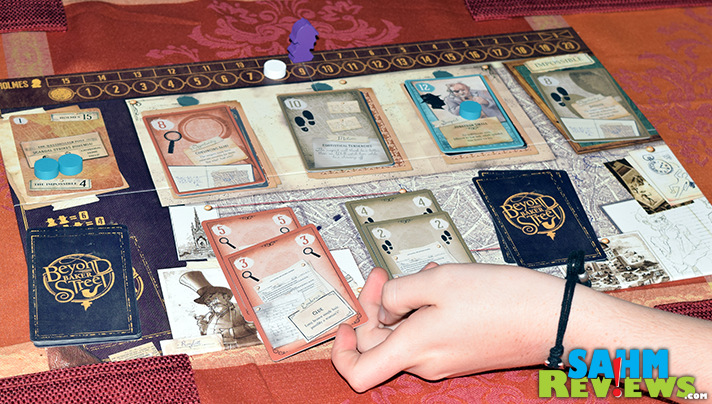 You can “Investigate” by playing one of the cards from your hand to one of the Lead cards and draw a new one. Each Lead card has a value printed on it, and you are trying to match the icon and get the total of all played cards to equal the pre-printed value. Once you reach the exact total, another players’ action would be to “Confirm” the lead by placing a market on the turned-over stack and moving Sherlock Holmes’ marker back one space. 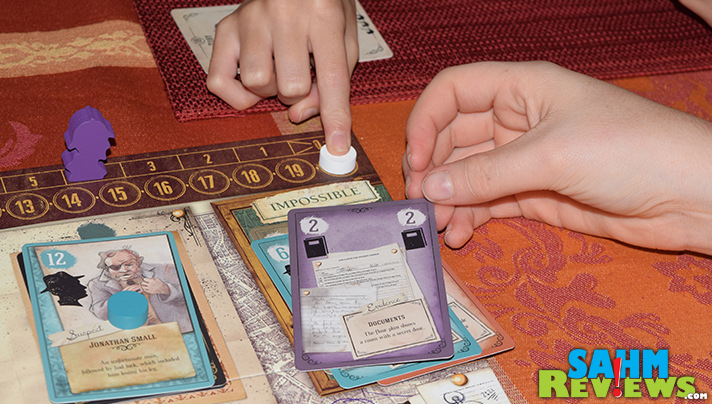 A player may also “Eliminate” by playing one of the Evidence cards in their hand to the “Impossible” pile. This is the discard area where you throw cards that you deem “Impossible” to be part of the solution. However, you are limited in the number of cards that may exist in that pile – any additional each cause Sherlock to move forward one space on his track. If you have gotten to the point that you feel the face-up Lead card is also unattainable, you can “Pursue” by discarding it to the Impossible pile, returning any previously-played evidence cards to the draw pile. 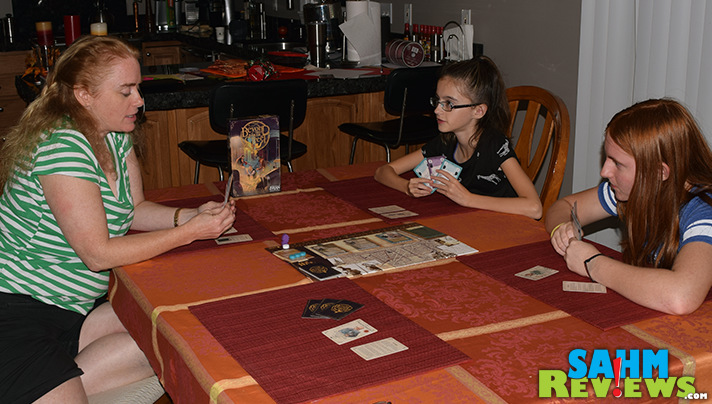 Beyond Baker Street is quite difficult to explain in words exactly how to play. It is one that you must get the feel of by actually playing. Z-Man Games realized this when creating the rulebook and suggest playing without the optional character cards for the first game or two. We agree, but the game really shines when these are added back in. You will quickly pick up on the math needed to be successful, so these character cards can turn up the difficulty quite a bit. 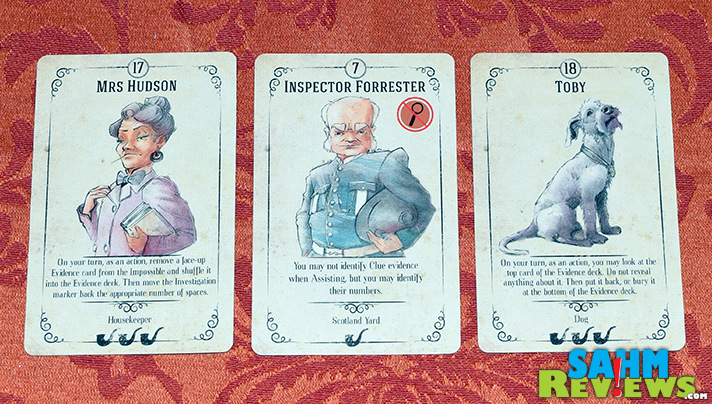 Each character card has a number of pipes printed at the bottom, denoting whether they make the game easier or more difficult, and to what extent. The more pipes on the card, the easier it makes the game. They also serve a couple other purposes – they allow the players an additional level of roleplay within the game and also each have a number printed on them which is used to determine the first player (lowest goes first). Once you have mastered Beyond Baker Street without the characters, add them to limit what types of clues you can give, allowing you to move Sherlock’s marker back two (instead of one) when you confirm evidence or even swap a card with another player. With 18 included characters, and assumingly more in the future, there is a nearly endless number of combinations to create custom games!

Designed for 2-4 players and each round lasting only 30 minutes (or less), Beyond Baker Street has earned a permanent place in our game night bag. You can find copies on Amazon for under the $35 MSRP or direct from Z-Man Games in their online store. Keep an eye on Z-Man’s Facebook and Twitter feeds as they have a number of new titles set to debut before the holidays and let them know you’d like to see more of them on SahmReviews!