Most games we find at thrift are ones we’ve never seen or heard of before. I guess that’s part of the thrill, finding a decades-old game in good condition and getting to learn it as if we had bought it new. Every once in a while we do find recent titles that we’ve enjoyed before (Dominion), but there are a few titles that are well-known, yet we haven’t run across a complete copy yet.

This is the case with Ravensburger’s Labyrinth. By hobby game standards, a mega hit and destined to be considered a modern classic. It’s no stranger at our local Goodwill stores, but every time we find a copy we know we need to open it up and count the number of tiles in the box. Inevitably there are a few missing, which makes the game completely unplayable. I lost track of how many times we had to pass on a copy because it was incomplete. I’m sure if I had ponied up for them I’d have at least four complete copies at this point by combining them together. 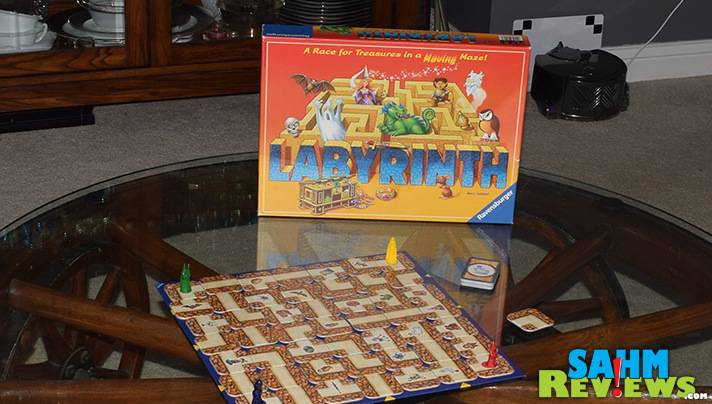 Finally last month we found one copy that showed promise. It was taped shut by the thrift shop employees, so we had to cut it open in the store to inspect the contents. Lo and behold – this copy had never been played! In fact, all of the tiles had never been punched out of their original boards! There was no need to go any further. There was no doubt this was the most complete and probably the best possible condition I could expect short of buying a brand new copy! 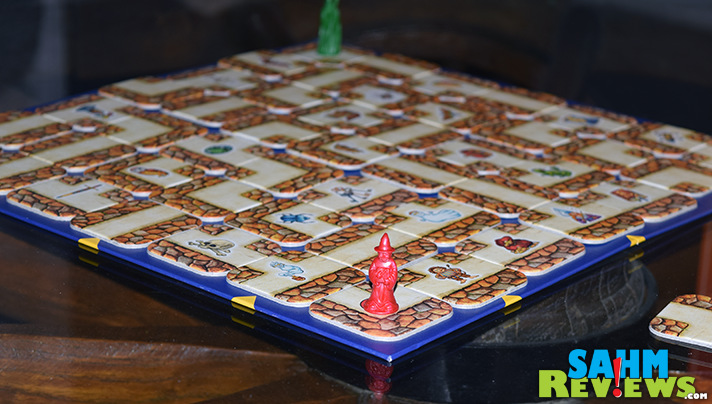 First issued in 1986, Labyrinth was nominated that same year for the coveted Spiel des Jahres Game of the Year award. Since then it has become one of the best-selling hobby games of all time and continues to gather new fans each year.

To win the game, you must search the labyrinth for your magical objects and characters by carefully moving through the constantly changing maze. The first player to do so and return to the starting square is declared the winner.

The included maze cards are shuffled and placed randomly throughout the board, with one being left over and used to move the other tiles. Each player receives a stack of face-down object cards and places their playing piece on the same colored starting square. On your turn you’ll look at the top card in your stack of object cards and try to get to the square showing the same picture as on your card. 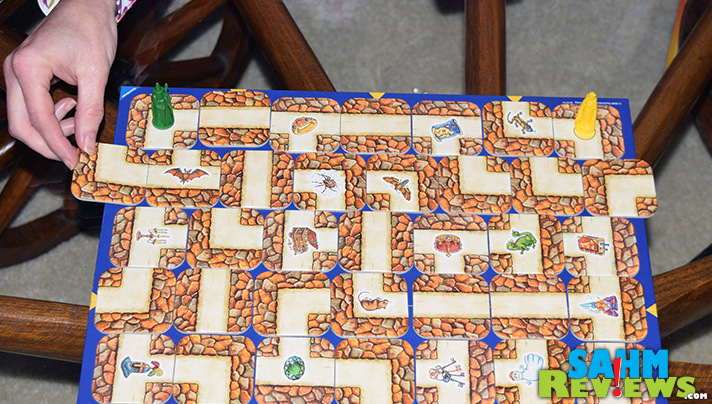 Instead of simply moving your pawn, you must use the extra maze card and insert it into one of the rows or columns and shift that entire group. The piece that leaves the board will be the next players card to push with. After shifting the maze, you may move your playing piece as far as you like along the open pathway. Once you reach your object goal, place that card face up beside your stack and draw a new object card. 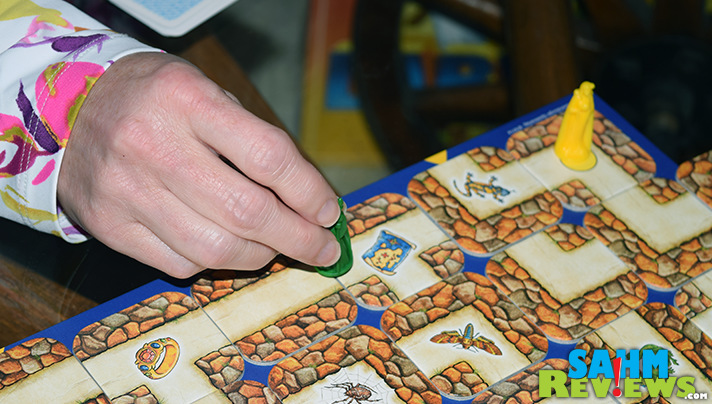 If a player’s pawn exits the board upon shifting, it re-enters on the newly-placed tile. This is a great strategy to either move yourself quickly to the other side of the board (and closer to your goal), or forcing your opponent farther away from their goal. Again, the first player to complete all of their goals and get their character back to their starting position is the winner!

Labyrinth is extremely simple to teach and you can be up and running in a matter of minutes. Perfect for ages as young as six or seven, it will easily entertain all ages and supports up to four players. You can still find brand new copies on Amazon for under $20 shipped, direct from Ravensburger or at your local Barnes & Noble or Target stores.

What game is on your must-have list that you haven’t found yet?