My girls are finally at the age where I don’t (overly) freak out when they head off on their own. Last weekend at Beaches Resorts, I actually told them they could stay at one of the parties while I retreated to my room to try to shake off a headache. We’ve been doing these “they are fine alone” efforts more and more as we acknowledge the girls are at a more self-sufficient age. This past summer during some of the gaming conventions, I was excited to see them want to venture off and try games without us. That felt pretty cool.

During one of the events, they found a booth they couldn’t stop raving about. They loved the games and the guy manning the booth was extremely complimentary about their skills. Any company that finds ways to engage with their younger clientele by treating them with respect is a winner in my book. As I discovered through further conversation with them about their experience, as it turns out, the company they were raving about, Twizmo Games, is one I already had connected with when they weren’t with me. It was kismet that they had such a fascination for the games without my influencing their opinions! Here are some of the games that attracted their interest: 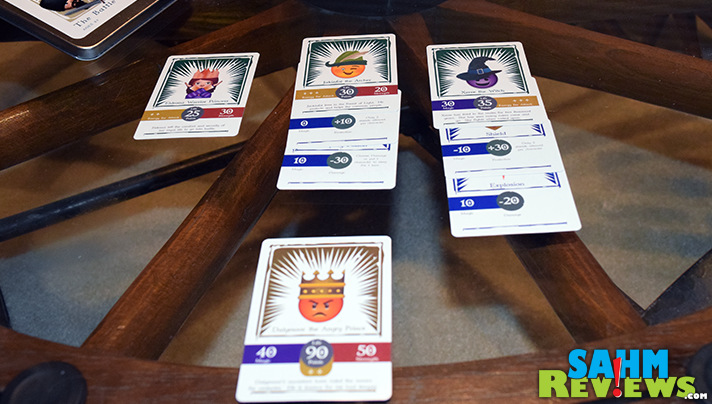 Emoji Wars is a traditional card battle game very similar to games like Pokemon with similar characteristics to Hearthstone, Castle Assault and Mage Wars. One nice feature about Emoji Wars is that it accommodates 2-4 players from the same tin instead of needing to buy additional decks or booster packs as is common with many battle card games. There are 6 different types of cards: Rulers (commanders), Allies (guards), Energy, Weapon, Magic and Shield. A designated dealer provides each player with a selection of cards used to create their leader and army. Once players have made their selections, their commander and ally cards are placed in front of them and unused cards are discarded out of the game. This feature allows each player to create their own strategy and provides diversity in every game.

Players draw up to three cards from their choice of either the magic or strength decks. On each turn, players utilize cards to earn energy that their allies will use to attack other players. Some allies can wield magical weapons while other require strength. Shields are available to help protect the allies until an opponent is able to overtake it.

Allies protect to their death and once all of a player’s allies have been killed, their commander can be attacked and eliminated. The player with the last commander standing is declared the winner. Emoji Wars is available on Amazon for around $18. 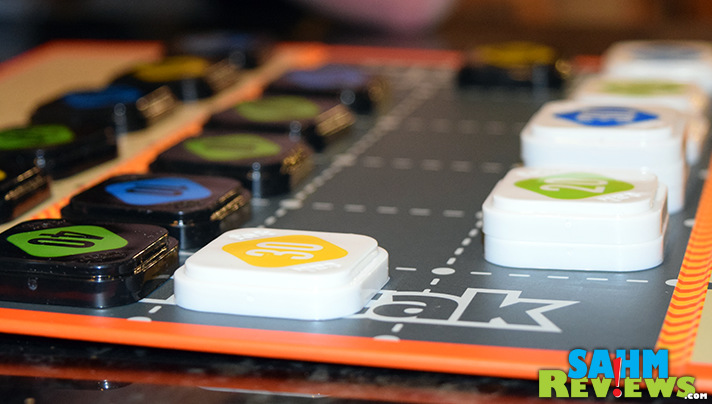 Oh, abstract games. How I love and hate thee at the same time. Scott is particularly fond of abstract games but that’s because he excels at them… as does Kennedy… and Madison. Me? I’m hit and miss. I have to go into it for the fun because I typically walk away the loser. tak·tak (no, that isn’t a typo, it isn’t supposed to be capitalized) is no exception. 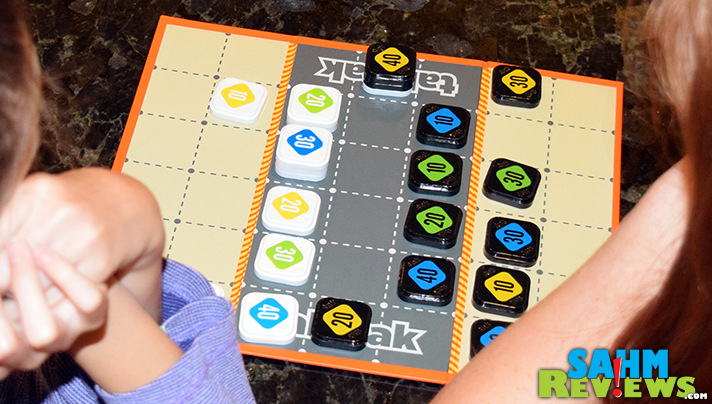 A traditional abstract strategy game with a goal of getting as many of your pieces through the war zone and to the safe zone on the other side, tak·tak is simple in theory but complex in the strategy needed. Young players can easily learn how to play! Each player has 12 pieces with various colors and numbers represented. Opponents take turns moving one tile exactly one space forward either straight or diagonally. Moving sideways or backwards is not allowed. 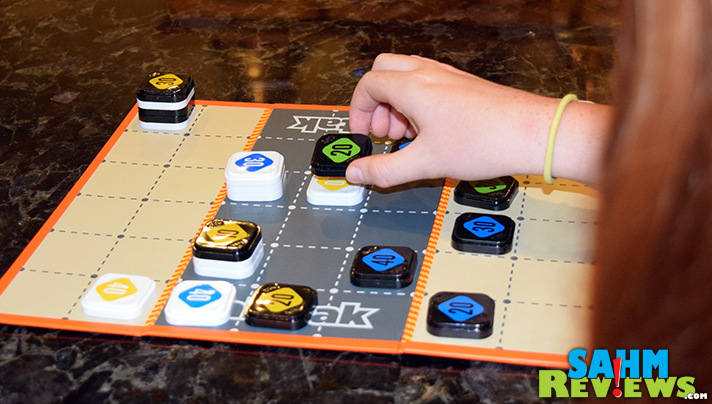 The problem is that instead of having your pieces jumped and removed from the board like you might in something like checkers, in tak·tak, your opponent can stack on top of yours, claiming those points as their own when that tower makes it safely across. Unless, of course, you snatch the stack back! 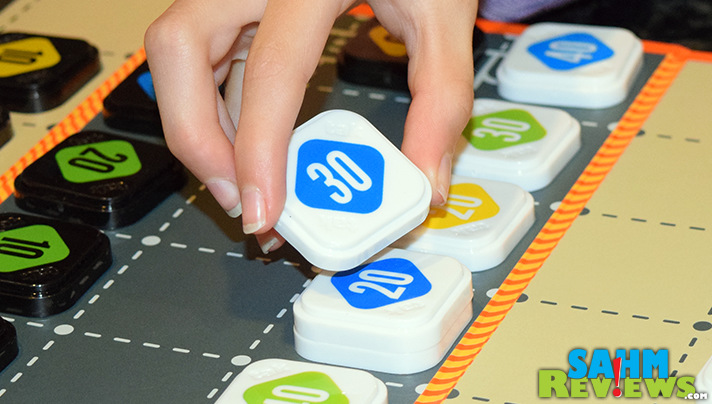 Stacking can be done both offensively and defensively as long as either the number or the color on the top of the stack matches. In other words, a player can stack on their own up to three high or they can stack on an opponent’s pile that is located in the war zone. When one player meets the designated end-game criteria, all chips (including stacked ones) in the opponent’s safe zone are tallied and the player with the highest total wins. tak·tak is for two players and is available on Amazon for a VERY reasonable price around $13! 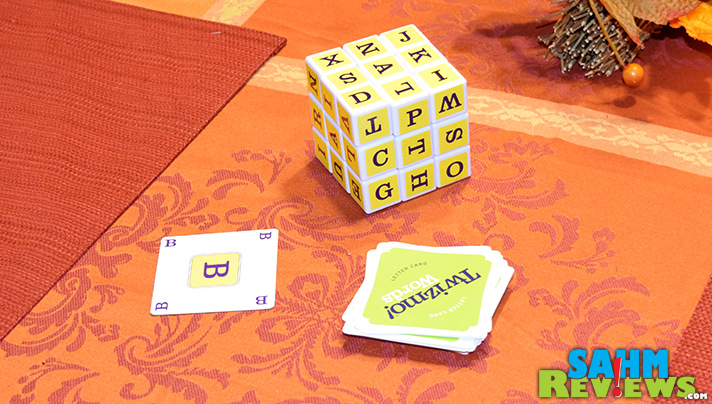 I remember way back when the original Rubik’s Cube released and am still a fan all these years later, welcoming puzzle variations of all kinds. Imagine my surprise when I found Twizmo! Words, a game that uses the cube mechanism and combines it with the concepts of Boggle to create a word puzzle game that is never the same game twice. 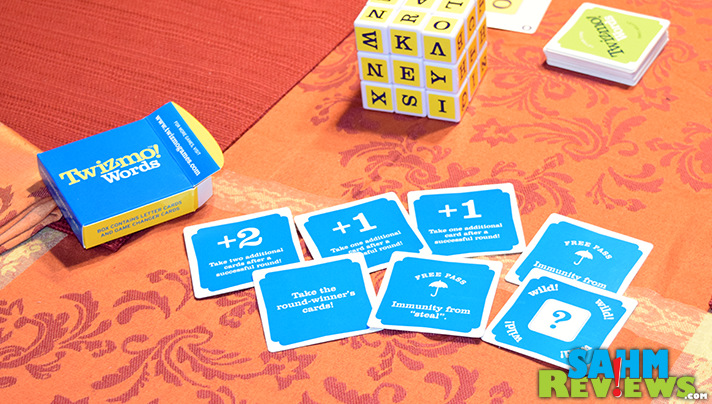 If you can spell, you can play this game and rules can be modified to include younger players. Twizmo Words is for two or more players – up to as many as can see the centrally located cube and card. Game Changer cards (ones that allow players to steal points and other tricks) are divided evenly among all participants. Letter cards are shuffled and placed in a stack in the center.

On a player’s turn, the cube is shuffled and a letter card is flipped. The active player tries to create a word that uses the flipped letter card in addition to any combination of letters on the cube to create a minimum 4-letter word before any opponent can create a minimum 7-letter word. If the active player wins, they take one card for a 4-letter word or an additional card for each letter beyond that. (2 cards for a 5 letter word, 3 cards for a 6 letter word, etc.) Play then shifts to the next person, randomizing the cube and flipping the next card. The game continues in this manner until all the letter cards are distributed. The player with the most cards wins. Twizmo Words is available on Amazon for a VERY reasonable price of under $10!

Sometimes I wonder if the girls tell me they like a game and agree to play it simply because they know it’s one of my favorites. When they express such admiration for a game without my impact then I know they’re genuinely fans. It’s a true testament to the fact that we are succeeding at raising adventurous and intelligent young ladies.

You can learn more about Twizmo Games as well as their other creative titles by checking out their website or following them on Facebook or Twitter.

Which of these games would your kids fall for?

6 thoughts on “Using Games to Win My Kids Over”