It was about 3 years ago when I spent a Saturday morning outside washing the car, mowing the lawn and doing general yard work when I came inside and found my oldest daughter right where I left her – sitting on the couch with her nose buried in her Nintendo 3DS. She had recently spent her birthday money to buy the latest Pokemon game and was determined to unlock certain things before her friend across the street, who had received his on Christmas day. At the same time my other daughter was watching TV; some type of Saturday morning cartoon or something, I honestly don’t recall.

It was then I decided if they were going to spend a nice day inside, they should at least be unplugged and doing something together. It wasn’t like they didn’t already have projects they could work on – they have a wonderful K’Nex selection and a couple American Girl dolls they haven’t outgrown, but no…, they’d rather have their noses glued to a screen. I decided then and there I would do something about it.

Since they were both interested in the Pokemon line of video games, I decided to introduce them to the card version. You’ve probably seen them lining the checkout aisles at your local big-box store. Alongside other names like Magic the Gathering and Yu-gi-oh, Pokemon commanded a good portion of the display. There were many different starter sets, deluxe blisters and individual packs resembling baseball cards where you don’t know what’s inside. This would be my ultimate downfall.

I purchased three starter sets, each including a pre-made deck of cards we could play with. Yes, I bought my own also so I could learn it with them and we could all take turns battling and trading each other. It also helped that a couple of the neighbors had sons who also had cards, so that summer was filled with Pokemon sessions. That is until they got tired of trading the same cards back and forth. Now my wallet was the target, because at $4 per, those mystery packs became a HUGE money sink. Of course I had to buy more than one at a time (with two kids), and of course I couldn’t let them beat me with better cards, so each trip to the store added another $12 plus tax to our total. It didn’t take long for me to start regretting my choices.

Then a new series of starter decks came out two months later with more powerful legendary cards. The circle was about to start again. 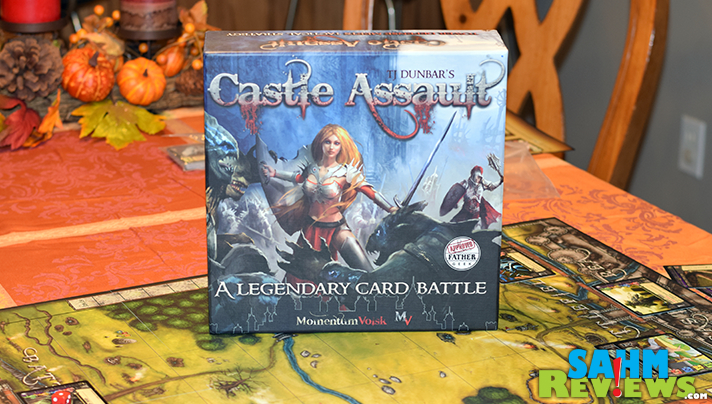 What if I could save just one parent from the expense associated with today’s typical CCG’s (collectible card games)? We found a perfect solution while attending Gen Con over the summer. Tucked in the back of the hall was a small booth owned by Momentum Volsk, showcasing their first game, Castle Assault.

It turns out that Castle Assault is much more than just a card battle game, it includes a playing board that houses each side’s castle and a central battlefield. Instead of just attacking each other (as in Magic or Pokemon), your characters must also transverse the board, fighting along the way until they reach the other castle and can begin tearing it down. 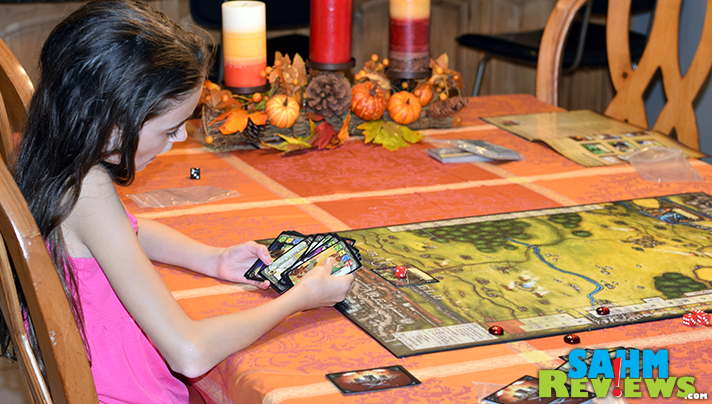 To start, each player chooses one of the faction decks of 34 cards. Vampires, Elves, Humans, Orcs, Werewolves and the Undead are all represented, each with their own abilities and specialties. Before playing, you construct a final deck of between 30 and 40 cards, eliminating ones from the original 34 that you don’t want, and adding in some of the neutral cards to construct what you think will be the most successful combination. 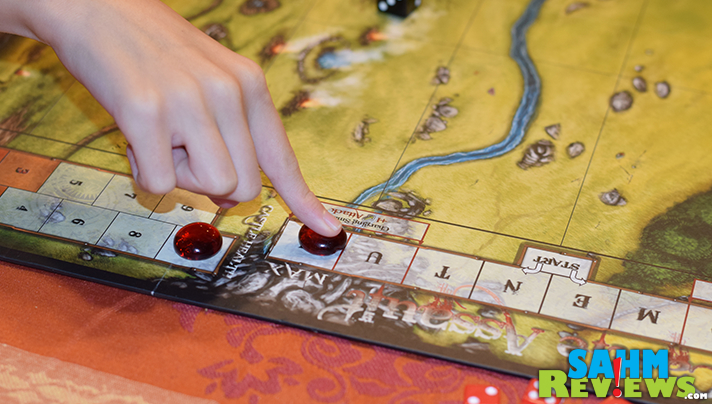 The first thing you do on each turn is to roll a die to determine the momentum swing. There is a track on the board that keeps tally of who has rolled better, and by maxing it out you can gain bonus damage against your opponent. 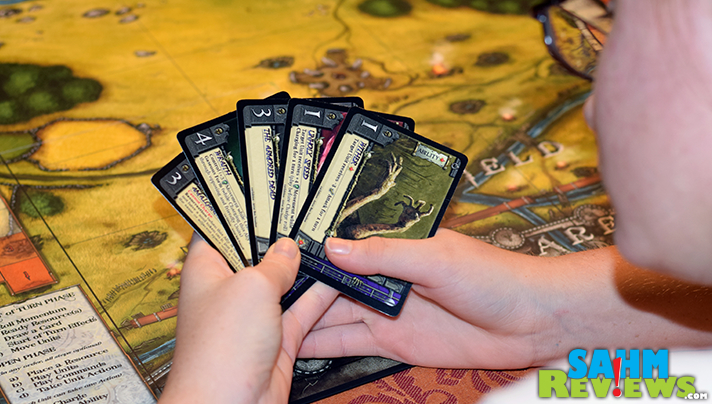 Starting with a hand of five, you draw an additional card each turn. But just because you drew it doesn’t mean you can play it. You must now pay a fee to put the card into play, and that is noted on the corner of the card. But before you can begin deploying your army, you have to figure out a way to pay for them. Once per turn you can discard a card from your hand and lay it face-down – this becomes your ‘bank’.

Each discarded card is valued at 1 point, which is used to pay the price of playing other cards. Once spent in a round, they are turned at an angle to show they’ve been used, but are renewed and are able to be respent on your next turn.

Once you have saved up enough to afford a fighter, you play it on the board inside of your castle in one of the three columns. Each card has values printed on it that represent its movement speed, attack value, defense value and total health. On subsequent turns, you will move the card forward the number of spaces printed until it meets a rival or your opponent’s castle.

On your turn you have a number of choices for each played card. You can attack an opponent (or wall) if you are already engaged (next) to an enemy, you can charge forward (distance determined by the roll of a die), you can perform a special action if that card has one available on it, or choose to do nothing. 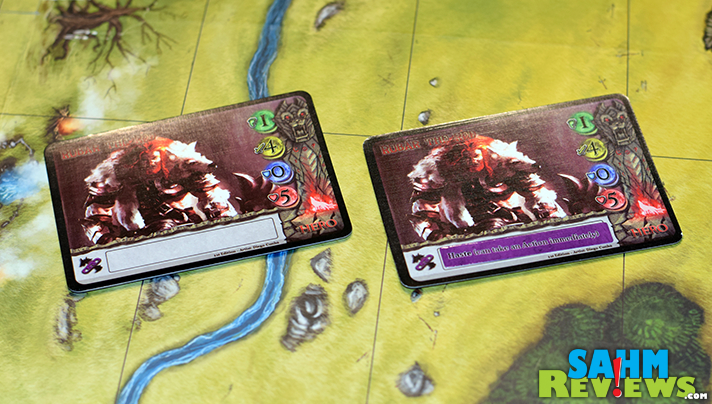 Each faction has an associated “Hero” class. If you play your Hero to the board and your opponent kills it, they win. So why take the risk? Upgrades, that’s why. 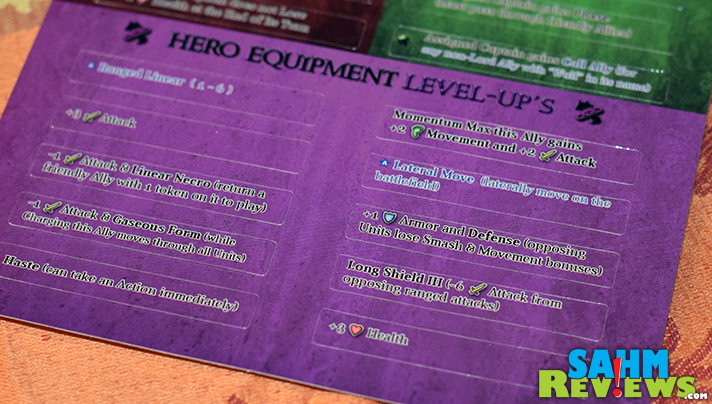 Included with the game are several solo scenarios to play. Complete them successfully and you are awarded upgrades for the heroes. An included sticker sheet allows you to choose exactly what new ability you’d like to use during head-to-head play. You can add to the Hero’s equipment or select one that gives your castle more health, Captains more powerful and versatile, or one which allows you to reuse cards in your discard pile. Each hero has a limited number of upgrade slots, so choose wisely as there are no undo’s!

If your child has shown even the slightest interest in other CCG’s, you’re going to have to take my word that Castle Assault supplies all the game play at a fixed cost. The amount of money (and whining) you’ll save by not having to buy new packs every couple of months is well worth the initial upfront cost of under $60.

You can find copies of Castle Assault on Amazon as well as directly from Momentum Volsk. Keep an eye on their Facebook and Twitter timelines as they travel to conventions demonstrating the game in person! If you run into them, be sure to thank them for saving you all that money!

Does anyone in your family play CCG’s like Magic the Gathering or Pokemon?

It’s been a couple years since we told you about Momentum Volsk’s Castle Assault and things have changed a little bit for 2017. An expansion of sorts has been issued, but it’s not like a normal add-on. Castle Assault: The Fell Fire Forge is also a standalone game at a lower price point than the original base game! 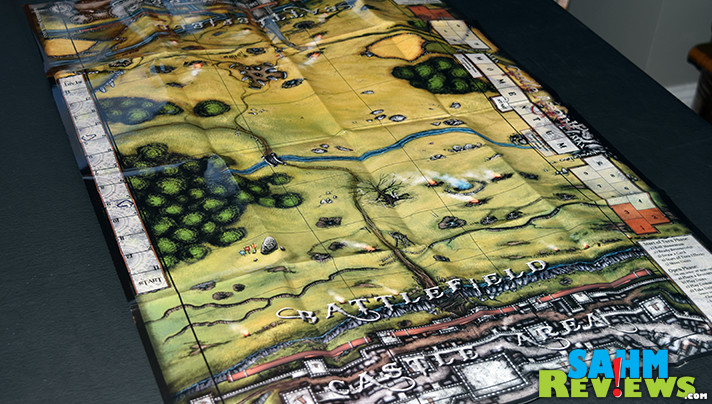 As hinted, Castle Assault: The Fell Fire Forge operates as its own version of Castle Assault with only a few tweaks to the game rules (for instance, battles only last one round – subsequent rounds no longer occur). To keep prices down, the standard game board is replaced by a thinner paper board of the same size, and since they knew it wouldn’t be quite as durable, Momentum Volsk elected to include two copies! And if you own the original version, you can still use the original board!

Castle Assault: The Fell Fire Forge includes four new warbands which can also be combined with the original game or played on their own. And it wouldn’t be Castle Assault without new upgrade stickers and best of all, campaigns! An entire Campaign Guide booklet is included for those that enjoy solo play and features well over a dozen scenarios that lead you from one to another depending upon your performance or in-game choices. 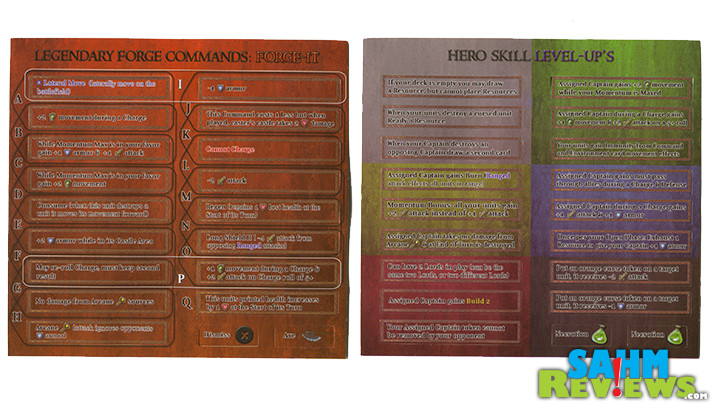 If you’ve been considering jumping into the Castle Assault world, Castle Assault: The Fell Fire Forge will save you a few bucks and let you experience the tighter and refined ruleset without giving up any game play. We still think the original version (now referred to as the Premier Edition) is the best value, especially since it includes a standard game board. Either choice will provide hours of fun without the need to continually purchase new packs of cards!

Find your copy of Castle Assault: The Fell Fire Forge direct from Momentum Volsk on their website!