One question that I often get from people is whether or not a game is appropriate for kids. There’s something I want to explain about game design. The mechanics and game experience often come first then a theme is added later. You’ve no doubt recognized this by the many variations of “opoly” available. It’s not uncommon to find games with violence (blood and gore), off-color themes and language. However, at the root of the game, it’s exactly that… just a game. When White Wizard Games excitedly showed us their new release, Sorcerer, last year at Origins Game Fair, they pointed out the theme might be scary for some. I wasn’t turned off by the cult theme and concepts of demons and necromancers. It is, after all, just a theme added to an otherwise normal game. Whether you enjoy a game or not should really boil down to that very basic concept.

So let’s talk about what type of game Sorcerer is before we move into the setup and overview of how to play. In a nutshell, Sorcerer is a card battle game that mixes together Castle Assault, Pokemon and Hero Realms. You’ll use cards to defend three battlefields along with dice to determine the amount of damage. What makes Sorcerer unique is that you’re working to conquer two of the three battlefields instead of just fighting it out on one.

The main thing to know about setting up the game is that you can customize your team by selecting one of the Character Decks, one of the Lineage Decks and one of the Domain Decks. Each time you play, this can be different which offers a lot of diversity to the game. Place the three battlefields in the center of the table, select an avatar and give each person a player board, cubes, beads and counters as noted in the instructions. 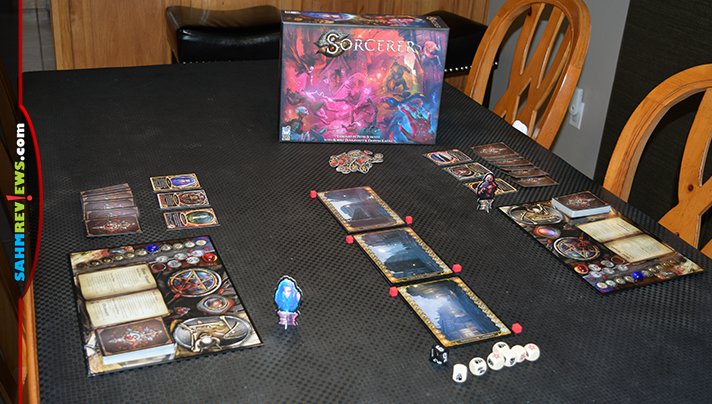 Sorcerer can be played head-to-head or with three to six people. Two-player and multiplayer modes use the same rules, but there are alternate rules for a 3-6 player battle royale and 2v2 or 3v3 team play. For the sake of simplicity and since 2-player games are what so many are seeking while they stay at home, I’ll just offer an overview of the basic game. After each player has created their unique sorcerer by combing the three decks, you’ll place the designated skill card alongside your board to indicate what your avatar’s special powers are. Shuffle the remaining cards to form your grimoire deck. 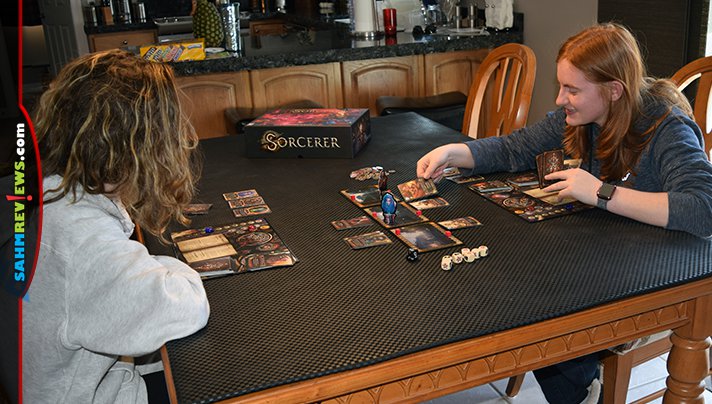 There are three types of cards within the deck. Minions, sorceries and attachments. You will find the energy cost (blue icon) in the upper left of each card. That’s the cost to play the card. In the bottom left is an essence or essence modifier (green icon) which is the amount of damage it takes to destroy that creature. The attack and attack modifiers (red icon) are on the left center of the card. The remainder of the cards are filled with text an icons that offer details on what happens when the card is played. 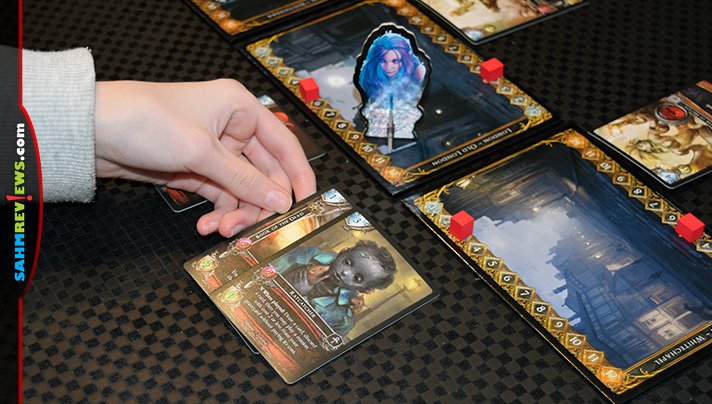 Each round consists of three phases: Ready Phase, Action Phase and Battle Phase. You’ll alternate who begins each round and continue playing Sorcerer until one player has conquered two of the three battlefields. In the Ready Phase, players reset all exhausted cards, counters and trackers to prepare for the new round. Players place their avatars on any battlefield. Your special skills will take effect for actions in this field. Following that comes the action phase. Starting with the first player and moving clockwise, every player takes an action by moving their red gem down one slot on the action tracker and taking an action. You may gain energy, draw cards, play a card, activate a power on a card or move a minion. 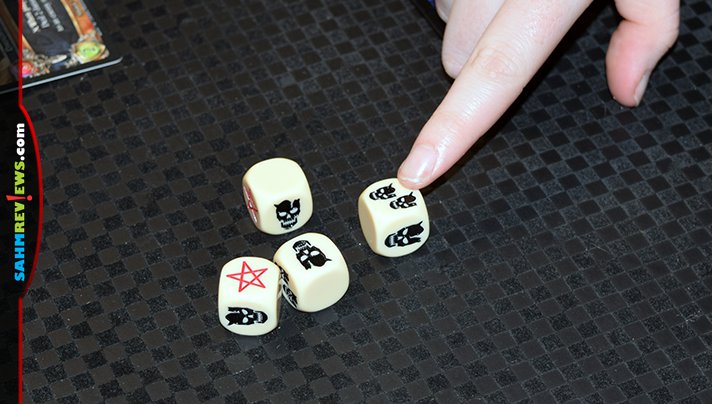 After everyone has expended all their actions, it’s time for the battle to begin and minions attack! When a minion attacks, you’ll rotate the card 90 degrees to indicate it’s been exhausted and you resolve all it’s available tactics. You roll the battle dice based on the minion’s attack abilities then spend omen tokens to re-roll or force another player to re-roll. Once that is done, it’s time to evaluate the damage as shown on the dice and injure or destroy the opponent’s minions. Once all the defenders are dead, damage is done to the battlefield. When the field takes its 12th point of damage, the attacking player conquers it. After all battles are resolved, a new round begins and the process continues someone meets the winning criteria.

If you enjoy battle games, Sorcerer offers a different approach to the genre. Having three playing fields requires more strategic thinking and removes the issue of being at the mercy of the cards you draw. Copies of Sorcerer are available on Amazon or direct from White Wizard Games. We also encourage you to connect with your local game store to see how you can support them while non-essential businesses are closed. White Wizard Games continues to be active on social media to take a few minutes to engage with them on Facebook and Twitter. If you’re looking for an excellent card battle game that is more compact, pick up a copy of Star Realms or download it for your mobile device.

Would you be more likely to play head-to-head, as teams or multiplayer?