To say that things are a bit unusual these days would be an understatement. There is some comfort in knowing that it isn’t just us though. While I’m sad that the kids are missing out on a lot of very amazing opportunities, I recognize that it isn’t just them. Anyone who is a senior right now is questioning whether they’ll be able to attend prom or even walk across the stage to get their diploma. As parents across my Facebook feed share stories and photos brought about by a lot (lot lot lot) more time together with their children, I’ve reflected back on some of the things that disappear as children get older. While playing Decrypto from IELLO, I was reminded of the evolution of communication through the years. When kids are little, you can speak normally and say pretty much anything. When they start to understand, parents turn to s-p-e-l-l-i-n-g things out but somehow kids magically figure out how to spell. At that point, you have to start speaking in code and being cryptic. It’s like being parents is a training ground to learn to play Decrypto. 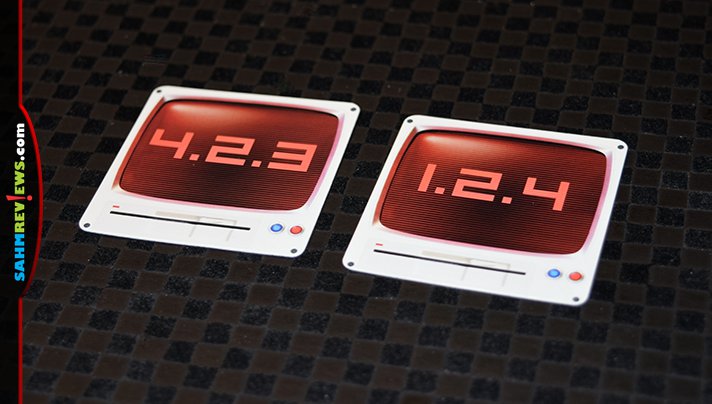 As the name implies, Decrypto is about deciphering a code from your partner while simultaneously trying to interpret the opposing team’s clues and intercept their communications. This deduction game can play three to eight people who are divided into two teams. 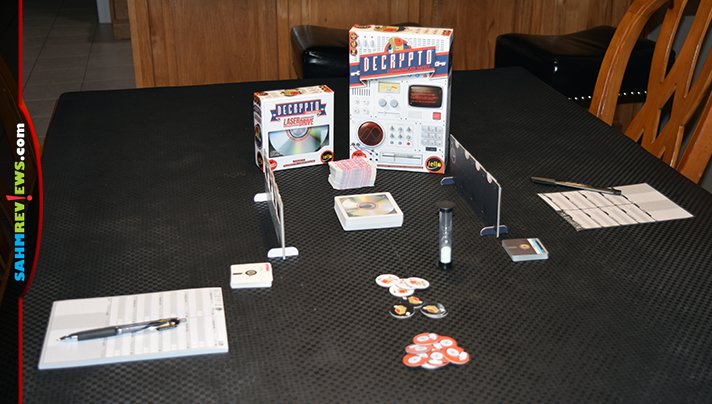 Shuffle the stack of Keyword Cards and place them in the center of the table. Give one team the white screen and the other the black one along with their respective colored Code Cards. Each team takes a single double-sided note sheet. The sand timer and tokens are placed within reach of each team as well. 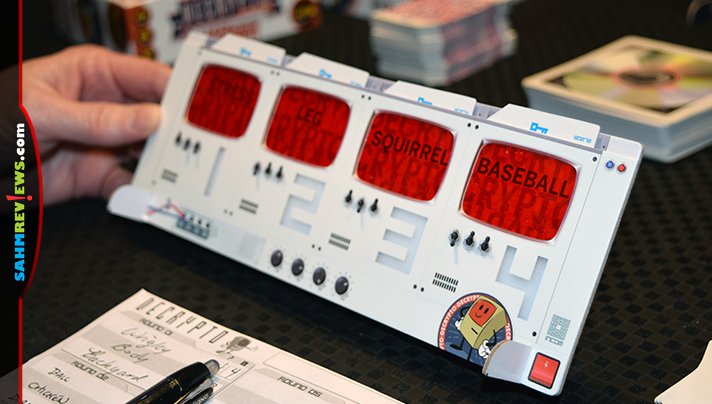 Each team takes four Keyword Cards and inserts them into the screen. One player from each team will begin as their team’s Encryptor and take the top card from their Code Deck, making sure to keep others from seeing it. There are four Keywords on each team’s screen, each with a number underneath it. These will remain secret from the opposing team, but over the course of several rounds the concept behind each will begin to be revealed. 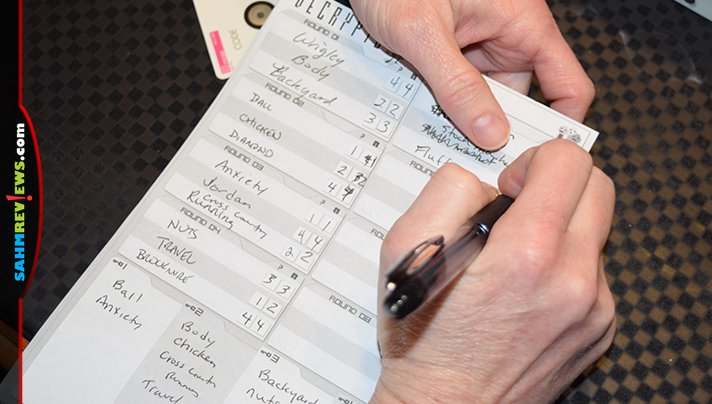 At the beginning of each round, the Encryptor must write three hints that will clue their team into the related numbers that are represented on the secret Code Card. These clues need to be logical and may be single words or complete sentences. However, they cannot include inside jokes, secret languages or visual hints about the word. As an example, the word Wrigley could be a clue for baseball. Initially, the opponents won’t know if it’s referring to the sport or gum. 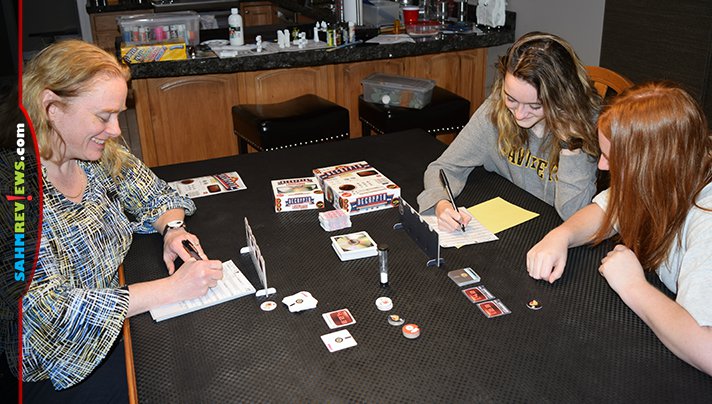 Once a team has written three clues, the timer is flipped and the opposing Encryptor has until the timer runs out to complete their clues. Next, the White team reads their three clues aloud and their teammates must write down the associated numbers. Simultaneously, the Black team records the three clues on the white side of their note sheet and discusses what keyword numbers the White team is referring to. Once both teams have written their numbers, the Black Team attempts to intercept their opponent’s code by reading aloud their guess. If they are correct, they score an Interception Token. If they are incorrect, nothing happens. Next, the White team evaluates their answer and if correct, nothing happens. If incorrect, they take a Miscommunication Token. The process continues with the Black team reading their clues aloud, both teams guessing and so forth.

At the end of the round, the winning condition is checked. The game is over if one team has two Interception tokens (they win) or two Miscommunication tokens (they lose). If there is not a winner, the game continues to another round with a new team member taking on the role of the Encryptor. Since teams write down the opposing team’s clues, they should eventually be able to piece together what a keyword might be. This is how you’re able to interpret and intercept their secret code! Like a game of Mastermind, it takes a few rounds before you can accurately identify it.

The Laser Drive expansion provides additional tokens and a stack of category cards which are placed along with the other community supplies during setup. At the beginning of each round, flip the top Laser Drive category card. At least one of the clues will need to abide by the direction on the category card. A team will earn a Laser token if all three of their clues correspond to the category card. At the end of each turn, teams may turn in two Laser tokens to make a guess at specifically identifying one their opponent’s keywords such as “Word #4 is baseball.” A correct answer earns that team an Interception token.

Because Decrypto is a team game, you can easily involve younger players. Aside from an excellent opportunity for team bonding, it helps teach deductive reasoning. You can order Decrypto direct from IELLO or get it on Amazon along with the expansion. If you’re ready to decipher another way you can intercept this game, look no further than the widget below!