All of our thrift stores are closed due to COVID-19. Fortunately we found a LOT of games and puzzles before the shutdown thanks to people who began their spring cleaning early. Jigsaw puzzles are a hot commodity right now and we’ve lent out dozens to family, neighbors and friends during these uncertain times. We have one table dedicated to putting one together ourselves and another with a game set up so we can play any time we wish. Right now we’re enjoying our latest Thrift Treasure find, Noble Celts. 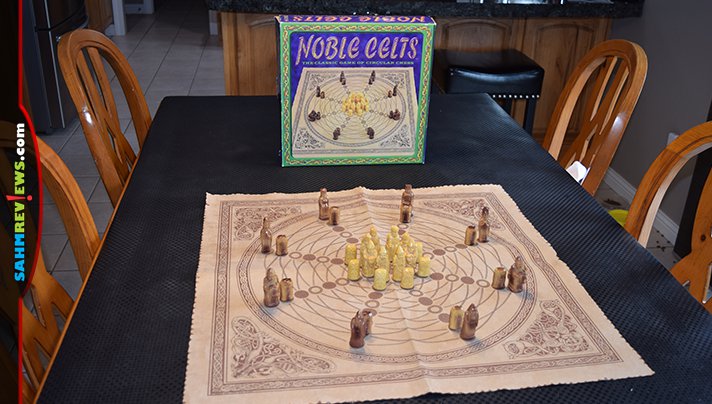 Noble Celts was originally published in the mid 90’s and was an attempt at a tribute to circular chess-type games of the Dark Ages. The original rules have been long lost, probably during one of the many times games like Chess were banned. This version utilizes the standard rules of Chess and adapts them to accommodate a circular board.

Each player begins the game with the standard sixteen Chess pieces. Instead of facing off from opposite ends of the board, one player begins with all of their pieces in the center while the other surrounds them with theirs on the perimeter. It is claimed that neither starting position has an advantage.

Movement of each piece in Noble Celts is very similar to what you’re used to in Chess. Kings move one circle in any direction (follow the connecting lines). Queens move the same as Rooks or Bishops, who move horizontally or vertically (Rook) or diagonally (Bishop) along the ropes. Pawns also move identically to their classic brethren – one or two spaces vertically to start and one space vertically from then on out. That is, unless they’re trying to capture an opponent’s piece – they may then strike diagonally. Pawns may also be promoted to any other piece type once they reach the opposite side of the board from where they began!

Castling works in the same manner as Chess – the King and the Rook swap places if neither have been moved as of yet and there is nothing between them. Calling “Check” when you place an opponent’s King in danger is optional and agreed upon before the start of the game. “Checkmate” is still used when you believe you have trapped their King into a losing position. 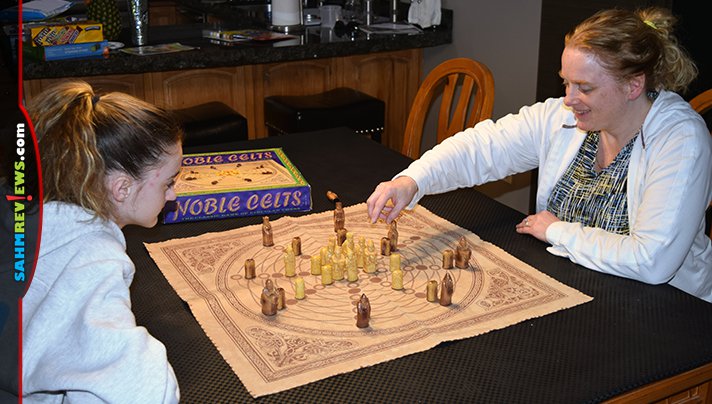 Stalemates are also handled identically. If your only option is to move back and forth on the same spaces, you must resign the game. If you are just running around the board being chased (a Rook running from a Queen), you too must resign. Rules for a quicker game, adapted from the Nine Palaces alternate ruleset of Xianqi (Chinese Chess), force a loss if you are required to move your King outside of your starting sixteen spaces.

While you can find Noble Celts on Amazon, you’ll find much better value picking up a copy from eBay. Noble Celts comes with its board printed on simulated leather material. Be sure to check it for tears, stains or smells before purchasing!

Have you ever seen or played this circular version of Chess?