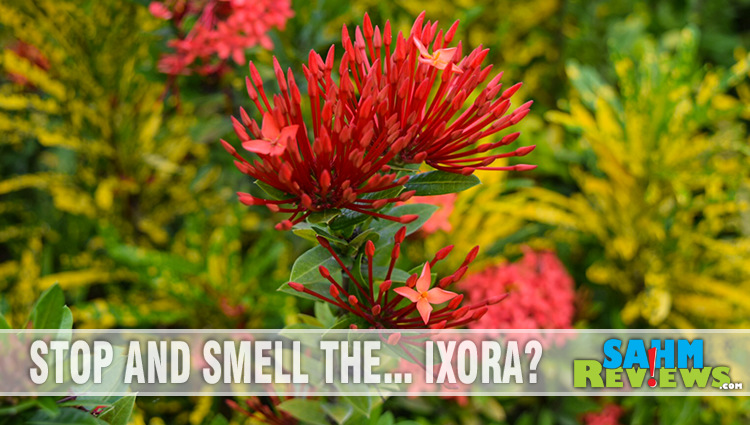 The Flowers of Beaches Negril

Maybe it’s my old age creeping up on me. Or maybe it’s my wife’s insisting that I take time and “stop to smell the roses”. Either way, whenever we travel, or even just go out shopping for the day, I have begun noticing the small details around me. Sometimes it’s the cleanliness of the store, others the decorations at our local McDonald’s. These are things the in-a-hurry customer probably never notices, much less appreciates.

A while back I started an Instagram account for the sole purpose of documenting these tiny parts of everyday life. Hundreds of photos later, it now concentrates on items from nature and the occasional plate of food. What started out as just a few photos of flowers around town has blossomed into dozens upon dozens of different varieties from all over the Western Hemisphere. A typical trip will easily yield ten to twenty shots of varieties I’ve never seen before. It gives me pause to realize how many I’ve completely missed during my business travels because I was too focused on the task at hand.

Case in point – we just returned from four wonderful nights in Negril, Jamaica at the all-inclusive Beaches Resort. As with any top-end vacation spot there is no lack of things and scenes to shoot. Warm beaches, cool pools, inviting drinks and to-die-for meals fill up the Instagram Feeds of most visitors. But I am more focused on the details now and notice things like the freshly cut lawns, sidewalks that are free of dropping leaves and color-coordinated employee uniforms. And then there is the nature surrounding the entire property. Brightly-colored lizards, free-roaming cats and a wide array of bird species can be found making their home in a place most only dream of visiting.

Once again I find myself drawn to the colorful flowers in bloom during our stay. Beaches has done an amazing job of highlighting a wide variety of native trees and plants, many with informational signs smartly placed next to their bases. I don’t profess to be a horticulturist, but was able to find out quite a bit of information online about some of the floral wonders you’ll find at Beaches Negril.

Pachystachys lutea, known by the common names “lollipop plant” and “golden shrimp plant”, is a subtropical, soft-stemmed evergreen shrub between 36 and 48 inches (90 and 120 cm) tall. The zygomorphic, long-throated, short-lived white flowers emerge sequentially from overlapping bright yellow bracts on racemes that are produced throughout the warm months. It is a popular landscape plant in tropical and subtropical areas of the world.

They grow in almost any well-drained soil but, like most ornamentals, prefer a soil with an acid reaction. In this preferred medium they attain their maximum in leaf size and beautiful coloring. The plant is also popular with hummingbirds.

Hibiscus is a diverse genus made up of roughly 220 species of annuals, herbaceous perennials, shrubs, subshrubs, and trees. Hibiscus have been cultivated for centuries. The name ‘Hibiscus’ comes from hibiskos, the old Greek name for the common marsh mallow. The most commonly grown species is Hibiscus rosa-sinensis, which means China Rose.

Plumbago is a genus of 10-20 species of flowering plants in the family Plumbaginaceae, native to warm temperate to tropical regions of the world. Common names include plumbago and leadwort (names which are also shared by the genus Ceratostigma). The generic name, derived from the Latin words plumbum (“lead”) and agere (“to resemble”), was first used for a plant known as μολυβδαινα (molybdaina) to Pedanius Dioscorides. This may have referred to its lead-blue flower color, the ability of the sap to create lead-colored stains on skin or the belief that the plant was a cure for lead poisoning.

The species include herbaceous plants and shrubs growing to 0.5–2 m (1.6–6.6 ft) tall. The leaves are spirally arranged, simple, entire, 0.5–12 cm (0.20–4.72 in) long, with a tapered base and often with a hairy margin. The flowers are white, blue, purple, red, or pink, with a tubular corolla with five petal-like lobes; they are produced in racemes.

The flower calyx has glandular trichomes (hairs), which secrete a sticky mucilage that is capable of trapping and killing insects; it is unclear what the purpose of these trichomes is; protection from pollination by way of “crawlers” (ants and other insects that typically do not transfer pollen between individual plants), or possible protocarnivory.

Mature plumbago leaves often have a whitish residue on their undersides, a feature that can confuse gardeners. While this white material resembles a powdery mildew disease or a chemical spray deposit, it is actually a natural exudate from “chalk” glands that are found on the plumbago species.

Ixora is a genus of flowering plants in the Rubiaceae family. It is the only genus in the tribe Ixoreae. It consists of tropical evergreen trees and shrubs and holds around 545 species. Though native to the tropical and subtropical areas throughout the world, its center of diversity is in Tropical Asia. Ixora also grows commonly in subtropical climates in the United States, such as Florida where it is commonly known as West Indian Jasmine. Other common names include viruchi, rangan, kheme, ponna, chann tanea, techi, pan, siantan, jarum-jarum/jejarum, jungle flame, jungle geranium among others. The plants possess leathery leaves, ranging from 3 to 6 inches in length, and produce large clusters of tiny flowers in the summer. Members of Ixora prefer acidic soil, and are suitable choices for bonsai. It is also a popular choice for hedges in parts of South East Asia. In tropical climates they flower year round and are commonly used in Hindu worship, as well as in ayurveda and Indian folk medicine.

The Orchidaceae are a diverse and widespread family of flowering plants, with blooms that are often colorful and often fragrant, commonly known as the orchid family.

Along with the Asteraceae, they are one of the two largest families of flowering plants. The Orchidaceae have about 28,000 currently accepted species, distributed in about 763 genera. The determination of which family is larger is still under debate, because verified data on the members of such enormous families are continually in flux. Regardless, the number of orchid species nearly equals the number of bony fishes and is more than twice the number of bird species, and about four times the number of mammal species. The family also encompasses about 6–11% of all seed plants. The largest genera are Bulbophyllum (2,000 species), Epidendrum (1,500 species), Dendrobium (1,400 species) and Pleurothallis (1,000 species).

The family also includes Vanilla (the genus of the vanilla plant), Orchis (type genus), and many commonly cultivated plants such as Phalaenopsis and Cattleya. Moreover, since the introduction of tropical species into cultivation in the 19th century, horticulturists have produced more than 100,000 hybrids and cultivars.

Alpinia is a genus of flowering plants in the ginger family, Zingiberaceae. It is named for Prospero Alpini, a 17th-century Italian botanist who specialized in exotic plants. Species are native to Asia, Australia, and the Pacific Islands, where they occur in tropical and subtropical climates. Several species are cultivated as ornamental plants. Species of the genus are known generally as ginger-lilies.

The vine species grow anywhere from 1 to 12 m (3 to 40 ft.) tall, scrambling over other plants with their spiky thorns. The thorns are tipped with a black, waxy substance. They are evergreen where rainfall occurs all year, or deciduous if there is a dry season. The leaves are alternate, simple ovate-acuminate, 4–13 cm long and 2–6 cm broad. The actual flower of the plant is small and generally white, but each cluster of three flowers is surrounded by three or six bracts with the bright colors associated with the plant, including pink, magenta, purple, red, orange, white, or yellow. Bougainvillea glabra is sometimes referred to as “paper flower” because the bracts are thin and papery. The fruit is a narrow five-lobed achene.

Bougainvillea are relatively pest-free plants, but they may suffer from worms, snails and aphids. The larvae of some Lepidoptera species also use them as food plants, for example the giant leopard moth (Hypercompe scribonia).

I wanted to include this because I thought it looked so cool. Was told by an employee that this palm tree only has these once a year and for only a short time. Not sure the type of palm, nor if these are actually a fruit or not, but would look wonderful in an arrangement!

These are but a few of the dozens of species we enjoyed during our visit to Beaches Resort in Negril. If you were there with us, did you notice all of them? If not, next time make sure to take notice of the minor details – you’ll be amazed at what you’re missing!

16 comments on «The Flowers of Beaches Negril»