There was an article in our local newspaper a couple of weeks ago showcasing the Dungeons & Dragons club at our district’s junior high. It didn’t really come as too much of a surprise to me because several of Madison’s friends at the high school also meet up to play. Perhaps this form of offline entertainment has grown legs in recent years thanks to a lot of discussion on shows like Big Bang Theory, Stranger Things and Gravity Falls. Maybe it’s because kids are discovering that it’s a lot of fun to create a character and go on an adventure.

But let’s be honest. Not everyone has the wherewithal to develop the story and run a game for a handful of other players who need to create their own characters. Sometimes all that creativity can be stifling. Sometimes you just don’t have the group of people available to prepare and partake in a traditional D&D experience. Sometimes you hear the words Dungeons & Dragons and you just freak out because it sounds intimidating. In times like this, you can turn to games that abbreviate the process or give you a taste of the game without all the set up and prep. Call to Adventure from Brotherwise Games is like a light version of it. 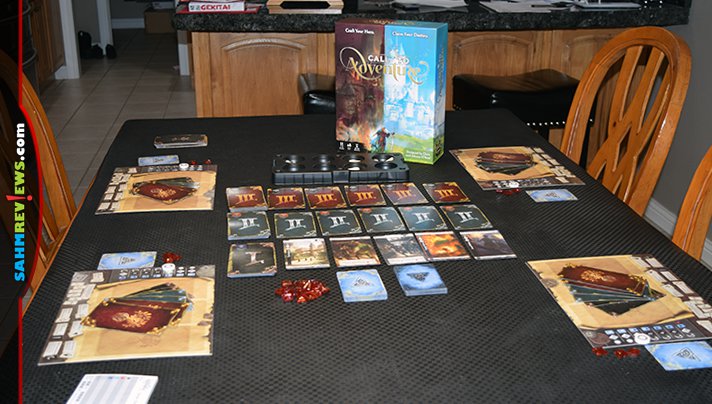 Setup is quite simple. Give each player 3 experience tokens. Shuffle all the different types of card decks independently then deal 7 character cards to each player (1 Hero, 2 Origins, 2 Motivations and 2 Destinies). Players will evaluate the various traits and bonus of these cards then discard one of each of the duplicate to establish their hero’s story, much like creating a D&D character. Everyone reveals their character by placing the Origin card in the first slot of your board followed by the Motivation in the center. Both of these are face up. The Destiny card is placed face down in the rightmost slot. Place your hero marker on the third level of the Corruption track on the left side of the board. Place the three Act decks on the table in a column then (depending on player count) deal out four or five cards face down in a row next to it. Place the tray of run stones within reach of all players. Once everyone is ready to play, reveal the cards in the Act I row. 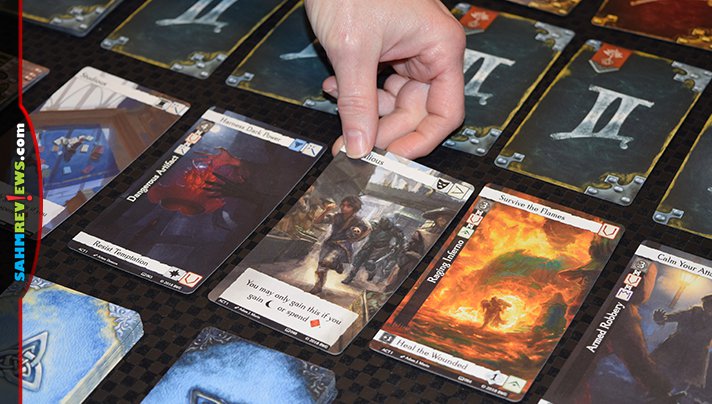 Over the course of three acts, you’ll be creating a character, acquiring traits and facing challenges in Call to Adventure. You’ll accumulate Triumph points, Tragedy points and Experience points which sum to your total Destiny score. The winner will be the player with the highest Destiny at the end of the third act. On your turn, you’ll have one of two main actions. You can either gain a Trait or Attempt a Challenge. In addition to those, you may also use a card effect, play a Hero or Antihero card or spend an Experience token to discard a card from the tableau and replace it with a new one from the top of the corresponding deck. 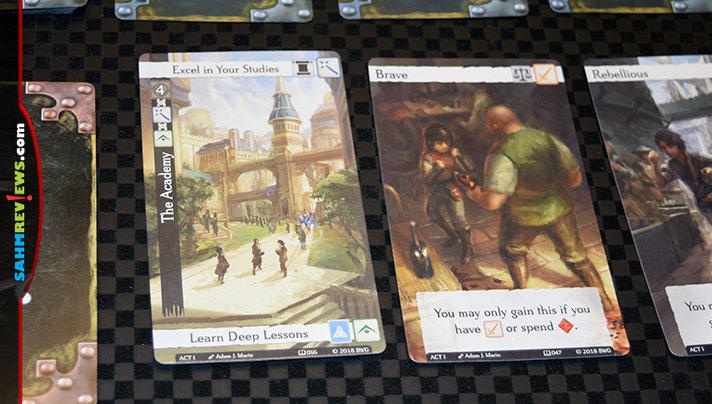 Traits represent the experiences, personality and profession of your character. If you decide to gain a Trait, you’ll add it under one of your existing cards. With a few exceptions as mentioned below, Act I traits will be placed under your Origin card on your player board, Act II under Motivation and  Act III under Destiny. Should you attempt a challenge, you’ll be throwing runes to determine whether you were successful or not. The difficulty is shown on the Challenge card along with two potential paths to take. Declare which you’ll be attempting then gather runes based on your character’s abilities. Decide if you want to spend Experience tokens to add dark runes to your pool. While these offer benefits, they also make you more corrupt which limits your ability to play hero cards. Apply any available card effects and you’re ready to attempt the challenge! 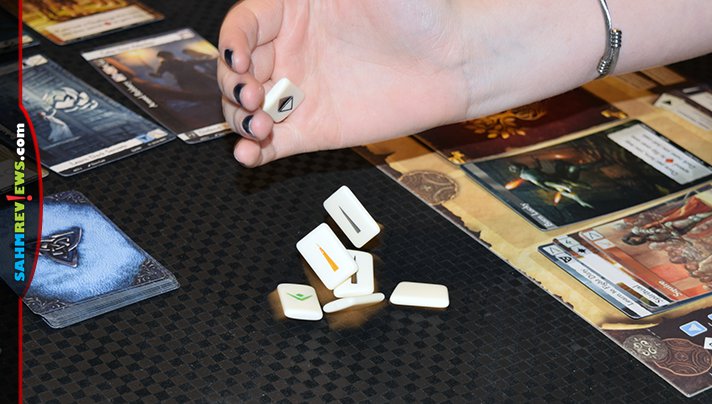 Shake and cast the runes for all players to inspect. Blank results are worth zero, but markings have different values depending on what they are. As an example, on a Core rune, a marking adds one to your result, but on an Ability rune, a marking may add one or two to your strength, dexterity, constitution, intelligence, wisdom or charisma. You’ll overcome the challenge if your rune results greater than or equal to the difficulty level on the card.

While you’re casting runes, there’s more to it than just success and failure. The player board includes a legend that shows what you’ll receive based on the results. You may earn more Experience tokens, hero cards or antihero cards. You can play these cards as an optional action on your turn. 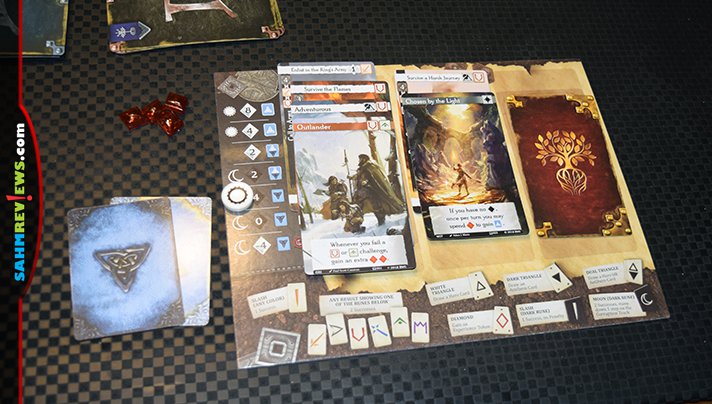 If you are successful, place the card under your current character card with the top or bottom revealed to show the path you took. If the results are less than the difficulty then you’ve failed. The card is removed from the game, but you have learned from your Call to Adventure and therefore gain experience. 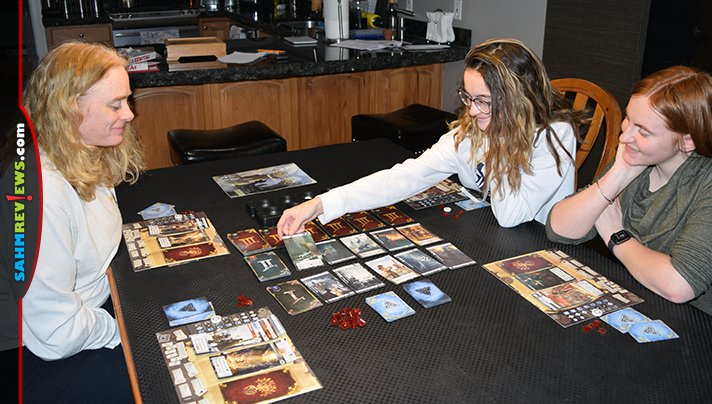 You’ll continue to take turns gaining traits or attempting challenges in Act I until you have earned three. Then you’ll proceed to Act II and reveal the cards in that row. Continue the process on to Act III in the same manner. While Act II and Act III cards may already be revealed to all players for selection, you must tuck cards under the leftmost character card on your board until you’ve added three. Once a player has added three cards under their hidden Destiny card then the final Act is closed and each player will take one final turn.

Call to Adventure has a variety of modifications that add difficulty to the game, including the introduction of Allies and Adversaries cards. You can also play the game solo or set it up as a cooperative adventure. The rule book includes a probability chart for casting runes which makes this a good game for teaching statistics. There are plenty of dungeon-themed and exploration games on the market, but Call to Adventure is a family-friendly version that teaches some of the character-building and exploration concepts. You can pick up a copy on Amazon, direct from Brotherwise Games or you can ask your local game retailer about copies. Visit Brotherwise Games on Facebook and Twitter to learn more about their games such as Unearth dice game, Boss Monster card game and an expansion to Call to Adventure, Name of the Wind.

Do you research games that you hear mentioned on TV shows?