One of the things I enjoy most about modern board games is their artwork. Today’s publishers put almost as much effort into creating an attractive product as they do the game’s mechanics. I guess it is becoming more necessary to do so thanks to so much competition in the marketplace. It is us, the consumer, that ultimately benefits. Games are not stored in the hall closet any longer – “shelfies” showing one’s collection prominently displayed are the new norm! 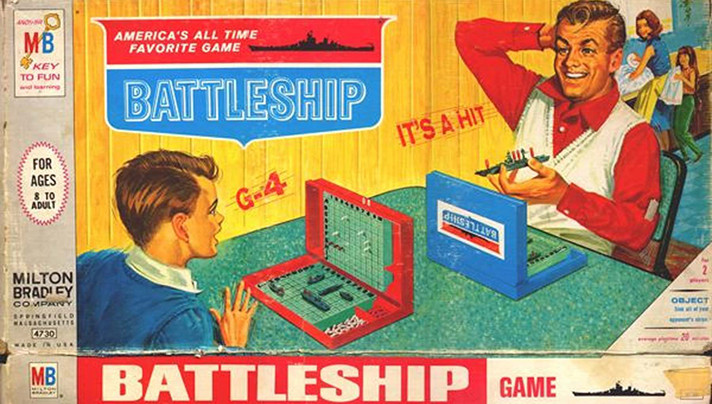 And it is so nice to have game boxes that we’re not ashamed of displaying. Boxes from vintage games are usually pretty bland or just show the game on the cover. Sometimes there are photos or images of people enjoying said game, and many times they aren’t politically correct by today’s standards. Take for example the above box from Battleship issued in the late 1960’s. Father and son are enjoying a rousing round of ship destruction while mom and sister look on approvingly while doing the dishes. That certainly wouldn’t go very far in today’s market.

With modern games having raised the bar for what is expected when it comes to artwork, there are still games that stand out on the shelves. A slew of Japanese-themed titles like Seikatsu and Tokaido have an Asian flair that is also calming to look at. Fantasy games, such as Portal of Heroes and Fantasy Realms spend a good portion of their development budget creating custom artwork for each card. And we can’t overlook authentic licensed games like the Legendary series of card games or a board game based upon Buffy the Vampire Slayer which uses actual footage to immerse the player into the Buffyverse. 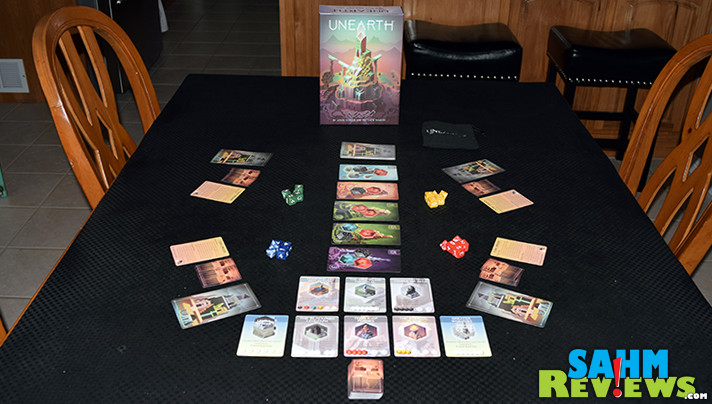 When we spotted Unearth by Brotherwise Games for sale at last year’s GenCon convention, it was their large banner with unique isometric artwork that caught our eye. Sure, there was some buzz around about the game play, but at a convention of that size lots of games get buzz. However not all of them are this attractive. As it turned out, the buzz for Unearth was accurate. I’ve got an undeserved reputation of being bad at rolling dice. If a critical roll during a boss battle is necessary, the dice are not passed my way unless I’m rolling for the boss. As it turns out, Unearth may be the perfect game to rid myself of this rep since it rewards both high and low dice rolls! 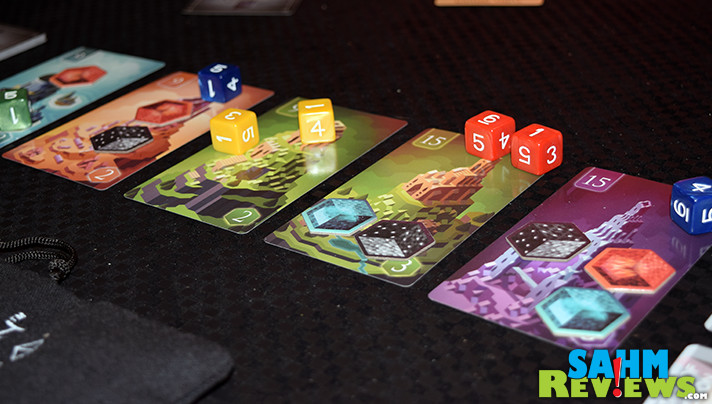 Unearth is a dice-rolling game about mining stone materials and building different Wonders of the World. During the game you’ll be trying to unearth lost ruins while at the same time collecting stones to aid in your construction of Wonders. Each player begins the game with two randomly-dealt Delver cards, one Ruin (face-down) and a Player Aid card. Five ruins are dealt to the center of the table (face-up) with randomly-drawn stone tiles along with six randomly-chosen Wonders and a Lesser and Greater Wonders, each with their matching tokens. Players choose one set of colored dice (Unearth supports up to four players) and a first player is randomly determined. 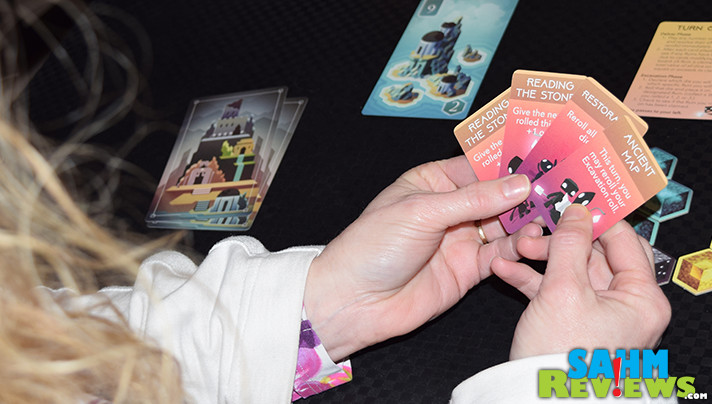 Your turn consists of two phases, the first being optional. Looking at your hand of cards, decide if you wish to play any this turn. This is the only time you may play cards, so this decision must be made before you roll your dice. After playing your card(s), select one of your dice and call out which of the five ruins you are rolling for. Roll the die and place it on that ruin. 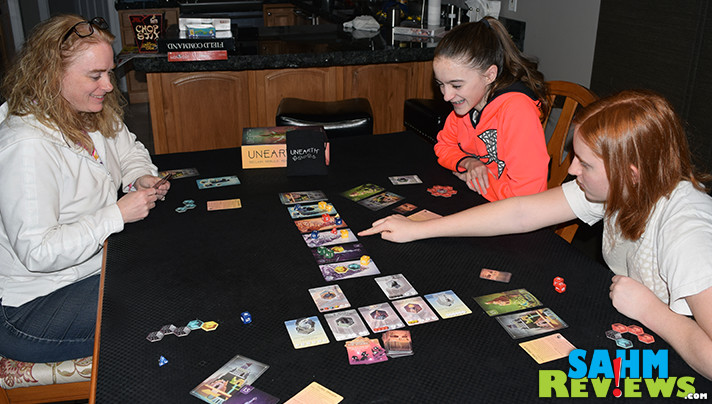 If you rolled a 1, 2 or 3, you will receive one of the stone tiles on the ruin (or draw one from the bag if there are none left). In the upper left of each Ruin card there is a number. If the total of all the dice on the card meets or exceeds that value, the card is completed and awarded to the player with the highest numbered die on the card. Ties are broken by comparing die types (Unearth includes four-sided, six-sided and eight-sided dice). The winning player receives the Ruin card into their personal collection and all other players with a die on the card receive a Delver card for each die. All players receive their dice back into their personal pool and a new Ruin is drawn and populated with stones. 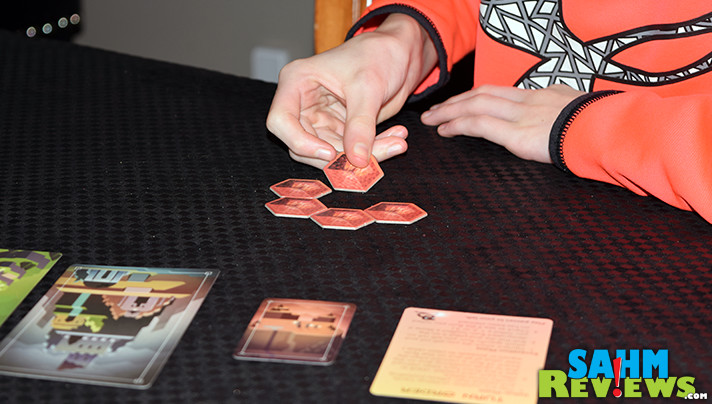 As previously noted, if you roll low results you will receive a Stone tile as a consolation. Immediately upon gathering one you will use it to build your personal tableau, arranging them in a circular fashion. Your goal is to complete a circle, which awards you with a Wonder. Each named Wonder has certain criteria needed in order to construct it. These give you end-game bonus points listed on the card. If you are unable to fulfill the exact stone requirements of any of the names Wonders, you can also choose a Greater Wonder if all of your colors match, or a Lesser Wonder if you have a random assortment of stones. Both of these also offer end-game rewards! 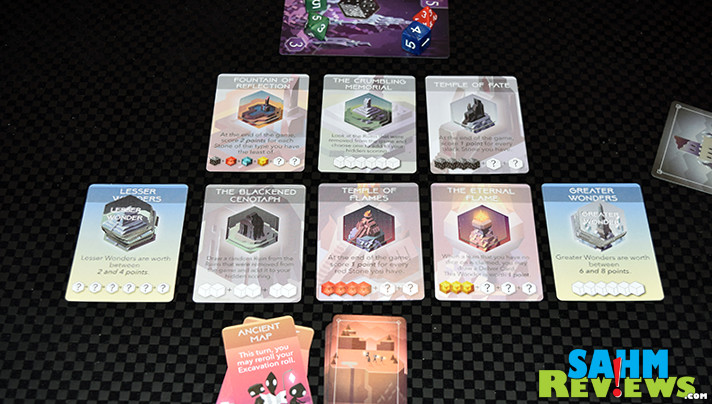 At the bottom of the Ruin deck is a randomly-chosen End-of-Age card which signifies the end of the game. When this card is revealed, either a special event will occur (eg. All future dice rolls receive -1 added to their value) or a special Ruin will be available to roll for. Once all ruins have been awarded to a player, your game of Unearth ends and final scores are tallied. Points are awarded for multiples of the same color of Ruins (1 = 2pts, 2 = 6pts, 3 = 12pts, etc.) and a bonus of five points for complete sets of all five colors of Ruins. Add this total to the points awarded by your Wonders and earn another five points if you managed to complete three or more Wonders! The player with the highest total wins Unearth! 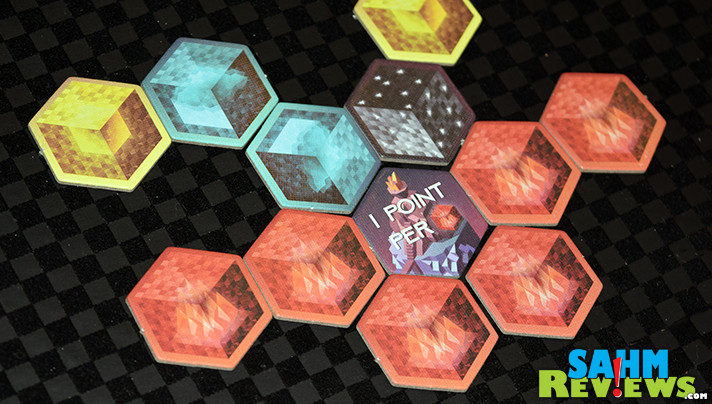 Even without the fantastic artwork by Jesse Riggle, Unearth is a solid set collection game with the unique bonus of rewarding all dice rolls. Consistently roll high and win Ruins. Roll low and work on constructing Wonders. Both paths can bring you success or supplement your other endeavors. This is one game we’re hoping to see an expansion that allows for additional players as we think it would be a lot of fun with 6-8 participants!

Your copy is waiting on Amazon for under $30 or at your local game store. If your retailer isn’t familiar with Unearth, tell them it’s by the same people behind Boss Monster – that should ring a bell. We hear rumor they’re working on something new, so watch for news releases on their website or subscribe to their Facebook and Twitter feeds to be the first to know!

What’s more important to you – how the game looks or how it plays?