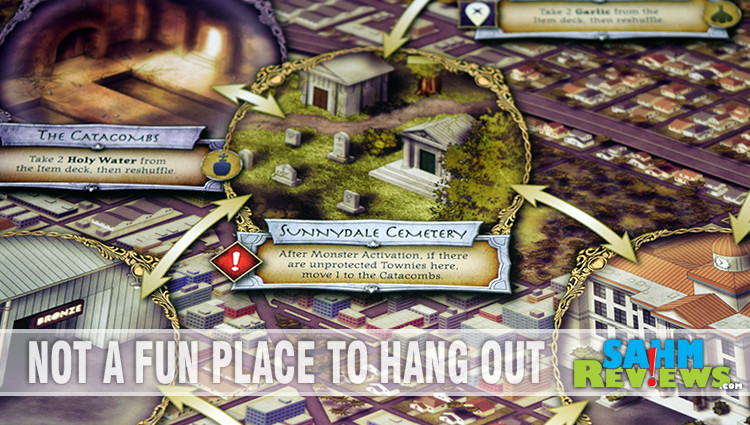 Just last week we told you all about a new cooperative game we picked up at Gen Con that was based in the Buffy the Vampire Slayer universe. Legendary: Buffy the Vampire Slayer is the latest version in a long line of card games set in the Legendary world. And you know how we feel about cooperative games where everyone either wins or loses together – we love them! While the Legendary card game was a no-brainer for us since we were already familiar with the series, it wasn’t the only Buffy-themed game making its debut at the show.

Buffy the Vampire Slayer: The Board Game by Jasco Games was also getting a lot of attention at the prominently-positioned booth in the middle of the exhibition hall. It also didn’t hurt that Jasco was hosting the game’s designer who graciously signed copies of the game that were purchased at the show. We missed out on meeting him, but did decide to bring home a copy since it was another cooperative game, this time a more traditional hobby board game! 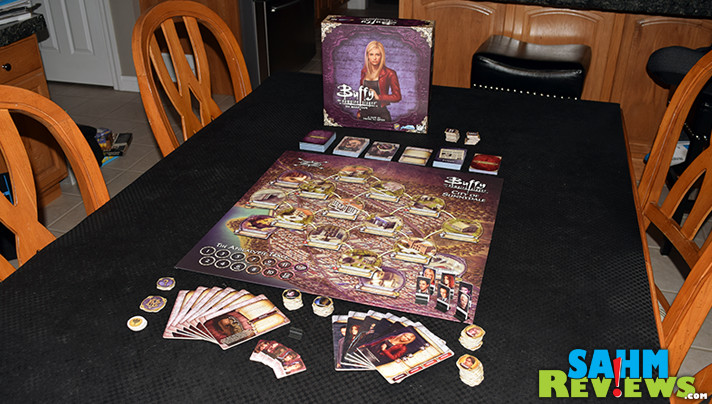 When we first looked at the board, it reminded us a lot of the Arkham Horror / Eldritch Horror series by Fantasy Flight. And while there are some game mechanic similarities, Buffy the Vampire Slayer: The Board Game is its own animal. And it plays in much less time, with an entire game clocking in at just around an hour!

In this Buffy-verse game, each player takes on the role of one of the show’s characters, each with their own special action. You are again fighting against a Big Bad, but instead of just heading straight into a boss battle, you must first fight your way through three “Monsters of the Week” in order to discover the Big Bad’s plot. Only then can you take him on. 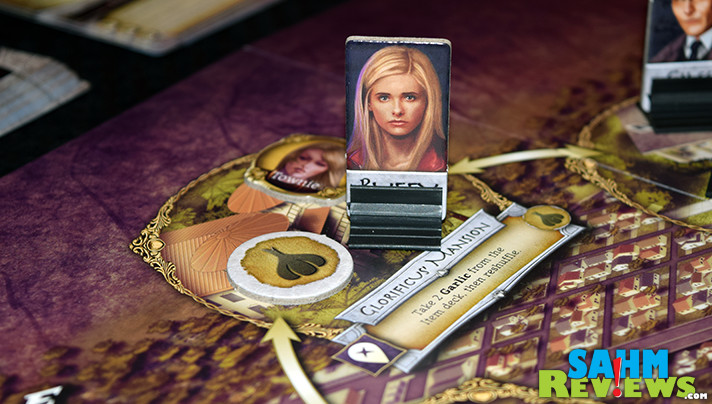 After every player has chosen which Buffy the Vampire Slayer character they wish to control, they receive their matching player board, cardboard standee and four action tokens. Three decks of cards are shuffled (Monster of the Week, Artifact and Item) and placed beside the board. Everyone agrees on a Big Bad as the game’s final boss (or select randomly) and their board and matching Plot cards are also put into the play area.

The first Monster of the Week is drawn and their token is placed on the board in the location indicated on the card. One event card per player is drawn, with the noted Baddies and Townies placed in their designated locations. That’s all there is to setup – now the show begins!

Your team’s goal is two-fold. As previously mentioned, you must kill the Monster of the Week and discover a clue to the Big Bad’s plot. But at the same time you must prevent the Baddies (Demons and Vampires) from killing an unprotected Townie. To add to the danger, Event cards will be drawn quite often, bringing more Baddies into the world or causing other (usually bad) things to happen. 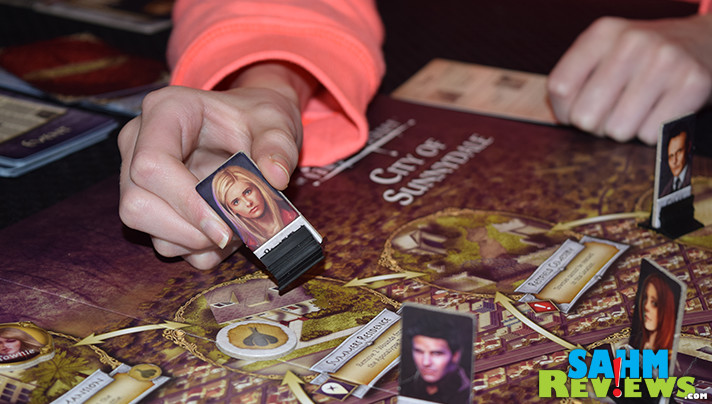 When the game begins, each player has four actions at their disposal – three regular ones and a fourth “special action” that differs from character to character. In order, players perform one of their actions and flip over the corresponding token to help track what actions they have already performed. As an action you may search and draw two Item cards, move your character to any location on the board, use the location you are standing on by following the instructions on the board (if there are no enemies in your location) or fight a Baddie, Monster of the Week or even the Big Bad!

The fourth action token in your possession allows you to activate your special ability or resolve a powerful Artifact card. They could also be used to perform one of the previously-mentioned basic actions, but each time a player uses their special action token, an Event card is drawn and resolved. This means more baddies added to the board. 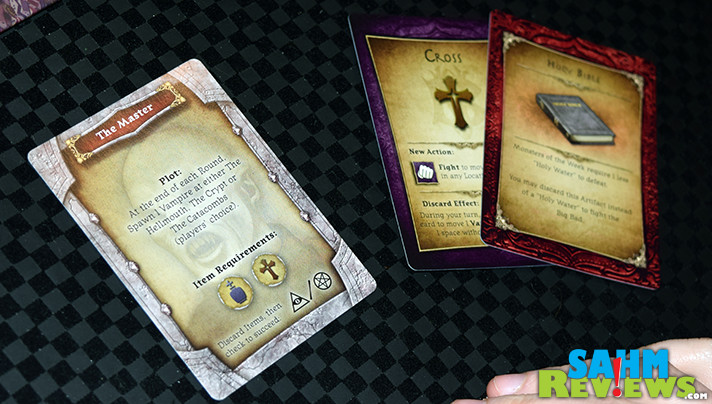 To kill a Monster of the Week, you must make your way to the space they occupy and possess the correct items in order to fight it. BUT…you only have a 2/3 chance of successfully defeating him. Draw an Event card and look at the bottom of the card for a unique icon. If it matches one of the two on the Monster’s card, then you are successful and place a Clue token in the Monster’s starting location. If you drew the one symbol not shown, then you do not defeat him and still lose those two items. 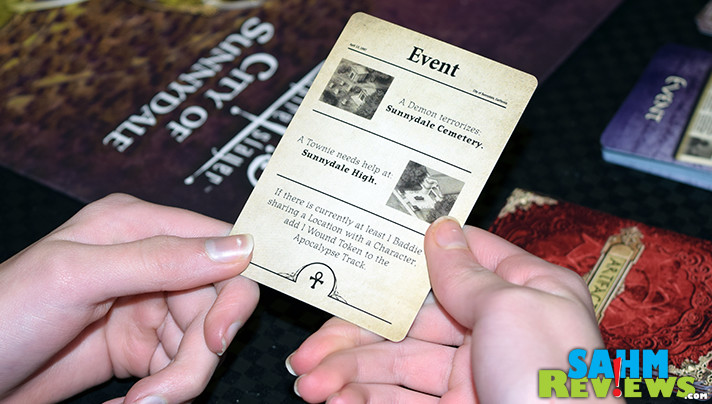 This method of checking for success is used in a number of ways in Buffy the Vampire Slayer: The Board Game. Sometimes you’ll need to check when using a powerful Artifact, other times you’ll need to do the same to overcome one of the Big Bad’s Plots. A bad streak of drawing the wrong cards can turn the tide of the game rather quickly, as we have found out on more than one occasion.

Moving to a space with a Clue location allows you to Search and discover one part of the Big Bad’s plot. This Plot card will make the game temporarily more difficult and remains in effect until all Clues are discovered by killing three Monsters of the Week and Searching their Clues and then overcome by collecting the required items and passing the Event check (whew). 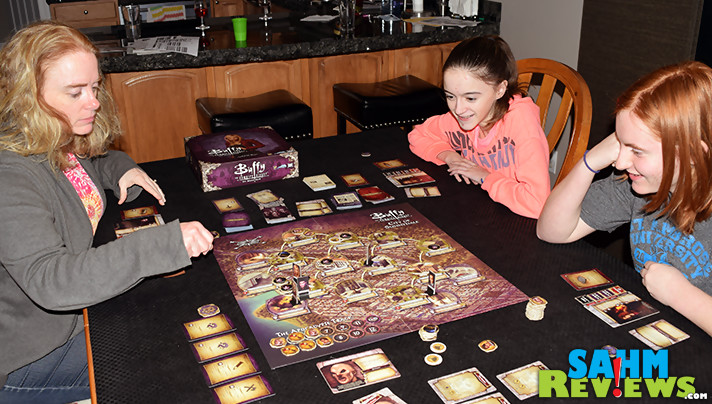 After all players have taken their four actions, the Big Bad, Monster of the Week and baddies get to take their turn. Additional baddies will be added to the board, unprotected Townies (the people you’re supposed to save) will be slain, characters will take wounds and baddies will move towards their next target, following a specific priority list. 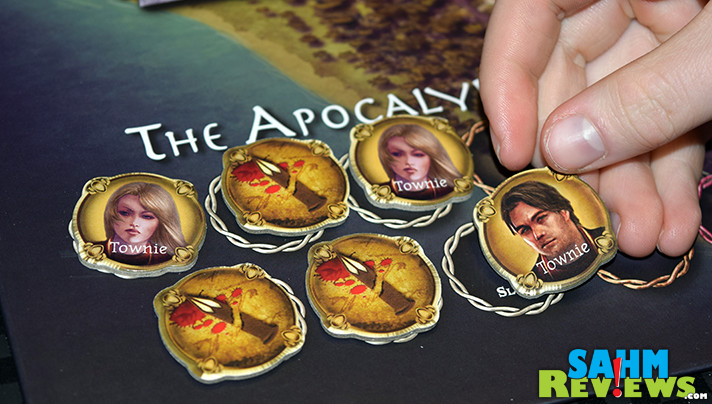 If at any time you fill the last spot on the Apocalypse Track with a Townie or wound, then the entire team loses. A loss also occurs if you need to add a wound to the track and there are no wound tokens available to place. If you are able to overcome all three Plots of your Big Bad, then your team wins Buffy the Vampire Slayer: The Board Game! 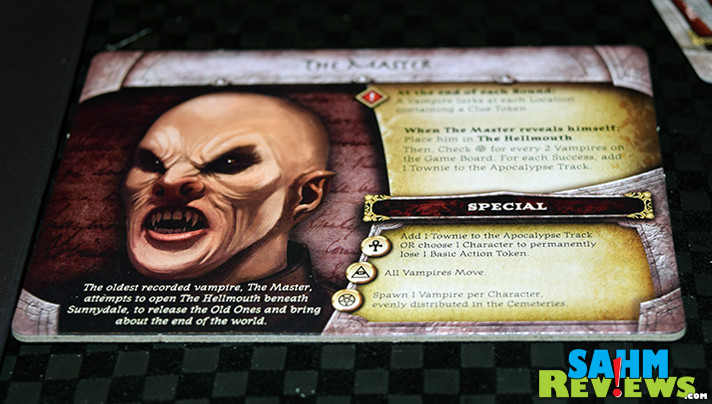 At the time of this writing, we’ve only played using the recommended starting Big Bad since he is the easiest to defeat. Judging from the difficulty, we’re looking forward to taking on future Big Bads as this one was no cake walk. It is still similar to the previously-mentioned titles, but much more approachable and probably appeals to a wider fan base. Either Buffy game we’ve highlighted would be a good choice for the fan in your family (why not both!).

Currently on Amazon for under $30, Buffy the Vampire Slayer: The Board Game is a very good value for a cooperative game that plays up to six. It’s easy enough to learn that you can begin playing and explain the various rules as they come up. Being able to play as one of the actual show’s characters probably gives it a slight edge over the Legendary version for us.

Never heard of Jasco Games? Check out their website to see what other licensed game titles they offer. And as always, make sure you’re following them on Facebook and Twitter to learn more about their new collectible card game due out this year – Cowboy Bebop!

Which Buffy character would you grab first?

8 comments on «Buffy the Vampire Slayer Board Game Overview»