Back in 1999 I caught wind of a new product being shown at the annual CES convention. There were a couple variations of what is now commonly known as a “DVR”, and when DirecTV began offering their TIVO-branded version shortly thereafter, we were one of the first to sign up. The promise of being able to easily record and playback television shows without setting a timer (like with a VCR) and having the option of skipping commercials was worth the risk of being an early adopter. Now nearly every household has had one at some point, but that technology is quickly being replaced with streaming.

But at that time we couldn’t fill up the hard drive fast enough. That’s when our binge-watching started. Firefly, The Simpsons, Futurama, Lost, South Park, The Shield, Making the Band – they all were on our must-watch list. We would record anything that was new in a season and made a decision later on whether or not to continue watching. But this also meant that anything that was already on air before we started recording never made it onto our list.

Also at that time vampires were all the rage thanks to the success of Buffy the Vampire Slayer. But because it had begun in 1997, it was one of those shows we didn’t consider because we felt we were too far behind. As it turns out, today some consider it one of the best shows ever made! And we still haven’t watched it…

But our good friend Doug had, and was a HUGE fan. This was something we weren’t aware of even though we had known him for years. We were at the 2017 Gen Con convention in Indianapolis and texting him pictures of all the new games coming out when he excited replied to one photo, “Is that Buffy Legendary?!” 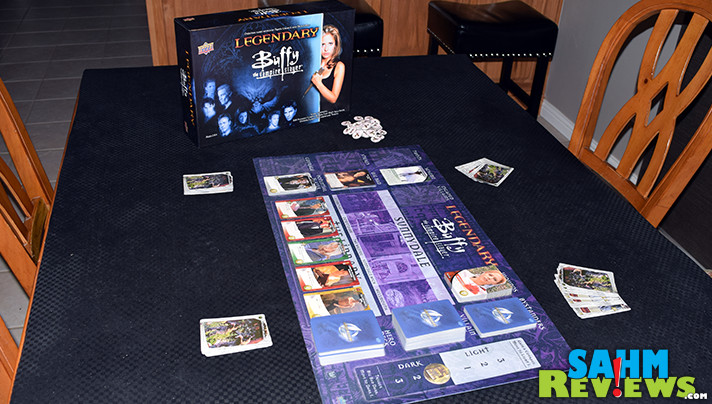 Now we’re familiar with Legendary: A Marvel Deck Building Game by Upper Deck, having featured it last spring. And we knew there have been a lot of different versions and expansions since we have another friend who has purchased them all. What we didn’t realize is that now Upper Deck was expanding the game into other licensed worlds. Of course this meant we needed to bring back a copy! 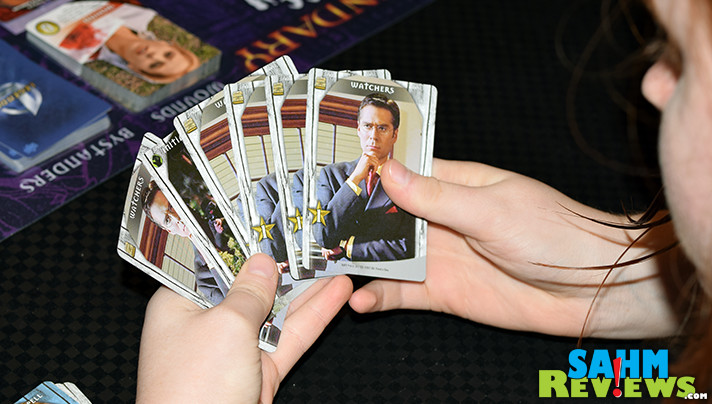 If you’re already familiar with the Legendary line of games, then you have a good idea of how to play Legendary: Buffy the Vampire Slayer. The underlying mechanics are basically the same – there are still heroes & villains, schemes & twists and wounds & bystanders. You’re still trying to defeat the Mastermind (referred to as the “Big Bad” in this version) four times, but with the introduction of two new elements to the Legendary system, doing so became just a little more difficult. 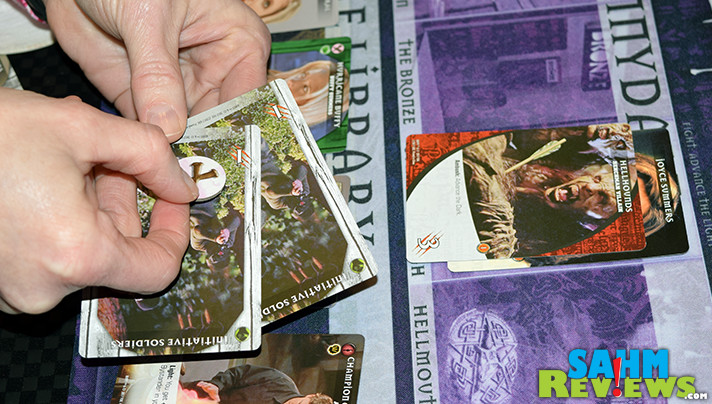 The first mechanic added are called Courage tokens. These are a new type of currency that are awarded by playing certain types of Hero cards or defeating certain Villains. Each player begins the game with one token and they may be spent at any time to add one Recruit point or one Attack point to your total when spending cards from your hand. They can be saved until any time in the game, so you may wish to amass them to be able to take on a Big Bad or purchase a very expensive Hero. 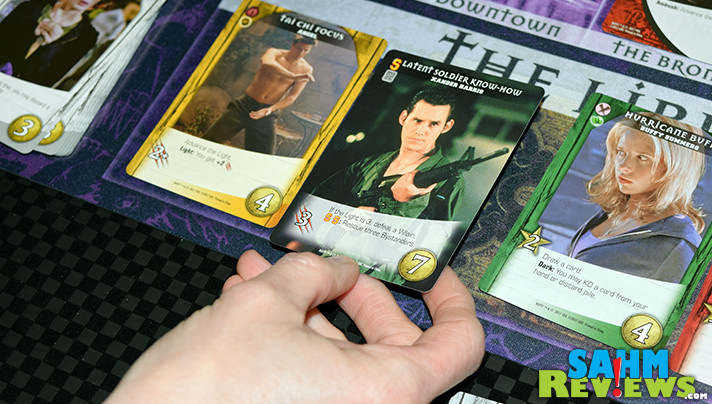 On the right-hand side of the board is a Light/Dark track. Certain cards will have abilities that will cause the marker to move up or down towards the Light or Dark. Big Bads have a Dark ability that is triggered if the marker needs to move towards the Dark and is already at the maximum of three. An escaping Villain advances the counter towards Dark, while defeating one in Sunnydale High or any of the Downtown spaces in Sunnydale moves it towards the Light. If the counter is at the maximum Light total of three and needs to move forward again, that active player receives a courage token and resets the track to one Light. 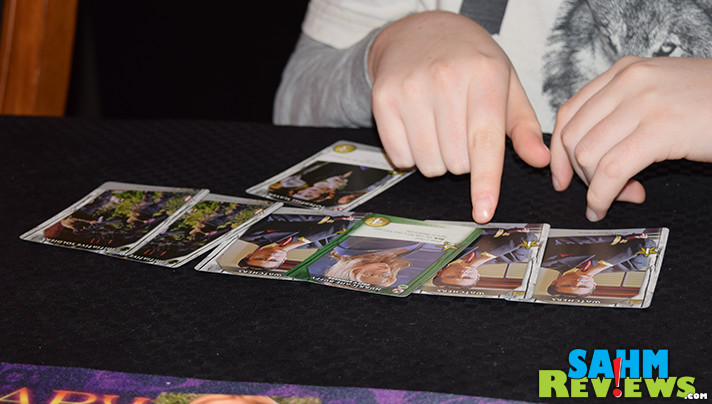 The Light & Dark track also triggers (or prevents from triggering) certain abilities on the hero cards and might make the Big Bad or Villains more powerful, depending upon the marker’s position. Careful management of this track is definitely necessary to be able to last long enough to build up a powerful enough team to take on the Big Bad. We consistently find ourselves with three Scheme Twist cards set next to the track, which in our scenario (scheme) means getting a fourth is an instant-loss. 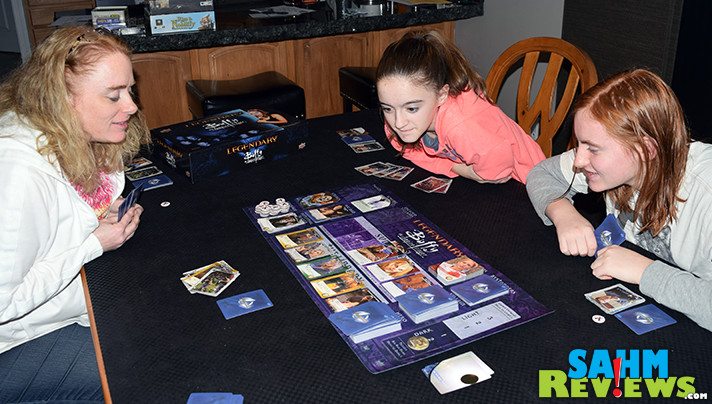 The rest of Legendary: Buffy the Vampire Slayer plays in pretty much the same manner as Upper Deck’s previous iterations of the Legendary series. This Buffy version is nicely relabeled with names, characters and artwork fitting the theme. Heroic teams are Slayers, Watchers, Scoobies and more. Hero classes include Magic, Knowledge, Covert and three others. Villains range from the standard Hellhounds and Vampire Initiates to members of the Order of Aurelius and the Scourge of Europe. And we can’t forget to mention the huge variety of television screenshots used in place of drawn artwork on the cards!

If you’ve been interested in trying out the Legendary series but weren’t a Marvel fan (blasphemy!), Legendary: Buffy the Vampire Slayer is the one you should try, especially if you were a fan of the series! In fact, after taking down a few Big Bads I found myself looking online to find out where we could binge watch the entire series.

Your copy is on Amazon for under the MSRP of $60, direct from Upper Deck or on the shelf of your local game store. This isn’t the last title you’ll see in the Legendary series, so make sure you’re following Upper Deck on Facebook and Twitter to find out what’s next!

What television series or movie theme would you like to see in the Legendary world?