Home / Giveaway / Current Giveaways / The Search is ON for the Legendary Gamer! 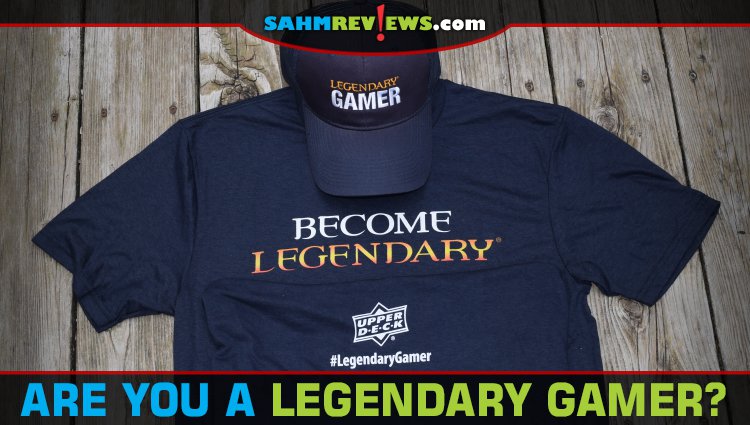 The Search is ON for the Legendary Gamer!

When Scott and I first met, he earned spending money by selling baseball cards and sports memorabilia. Always the entrepreneurial type, he took a different approach to marketing his collection than what most of the vendors at the card shows did. I learned a lot about sports cards and memorabilia and even did a presentation for my college speech class on how card condition impacts the value. Scott and I created exhibits for each student that included nine cards in different states of damage. Every card was the same White Sox team card from Upper Deck that we had distressed by tearing, bending and scuffing the edges to adjust the quality from poor to mint. My professor was so impressed with the presentation that she asked if she could record it as an example for future students. Our familiarity with Upper Deck had always revolved around their sports line until we learned they also offered board games. Upper Deck has a pretty strong community, but most of their promotions have revolved around their memorabilia and trading cards.

And they know it!

Well, they aren’t oblivious to this and to show their tabletop community some love, they came up with the Legendary Gamer promotion. We’ve featured overviews of their licensed Legendary titles including Legendary: Marvel deck-building game and Buffy the Vampire Slayer Legendary card game while also including others such as the X-Files version in our holiday gift guides. So when we received a shipment to promote the Legendary Gamer, that’s what initially came to mind. Check out the unboxing video to find out what we learned:

If you watched the unboxing video then you already know the big news: Upper Deck will be sending someone (and a guest) to Gen Con 2022! There will be three prizes with the grand prize including the trip, games and merchandise (prize value $2,325) and second and third prizes each consisting of an assortment of games and merchandise (valued at $900 and $600, respectively).

During an interview with Upper Deck, I inquired about the entry process and was given some insight that was very helpful. While video is a natural medium for this type of promotion, they recognize that not everyone is comfortable with being on camera. Either a video or written entry will be accepted and each entry will be judged based on criteria listed in the official rules: “Sponsor will create an internal panel to review all Entries that comply with these Rules. Such panel will review the Entries and select the winners based on the following criteria, in Sponsor’s sole discretion and as demonstrated in the Entry: (a) qualifications as the “Legendary Gamer,” (b) explanation as to what a Legendary Gamer means to Entrant and why Entrant believes he/she is the ultimate gamer, (c) demonstration of Entrant’s positivity in the gaming community, and (d) originality and uniqueness of the Entry.” When I asked if professionally submitted videos filled with glitz, glamour and effects would be necessary, they assured me that the judging will be on what is written or said. So, sure, a video can have bells and whistles to make it stand out, but it still boils down to the gamer and whether they are truly legendary.

At this point, you are probably itching to find out how you can enter. The official details are available on Upper Deck’s website, but here’s the general rundown.

Tell Upper Deck why you are the ultimate Legendary Gamer!

While I don’t have anything to do with the judging, I encourage you to create something that is meaningful that focuses on the details outlined above. Be boastful without bragging. Recognize your importance. This is no time to be humble! As much as I would like to be able to nominate people that I know don’t like to brag about the great things they do, that’s not an option. These entries have to come from the gamer themselves. So don’t be shy… you have until mid December to get your entry in. That’s plenty of time to put some thought into what you want to submit.

If you need some inspiration, swing by their social channels (Facebook, Twitter, Instagram) and check out Upper Deck games on Amazon then get your entry in! As a bonus, we are super excited to confirm that Upper Deck Entertainment is providing some exclusive merchandise for us to give away right here to one of our readers! The package includes some of the swag featured in the box we opened for the video. To be eligible to win the prize we’re giving away here, all you need to do is enter using the form below! We have some pretty legendary gamers here on the site. Good luck to any of our readers who enter either promotion!

3 comments on «The Search is ON for the Legendary Gamer!»