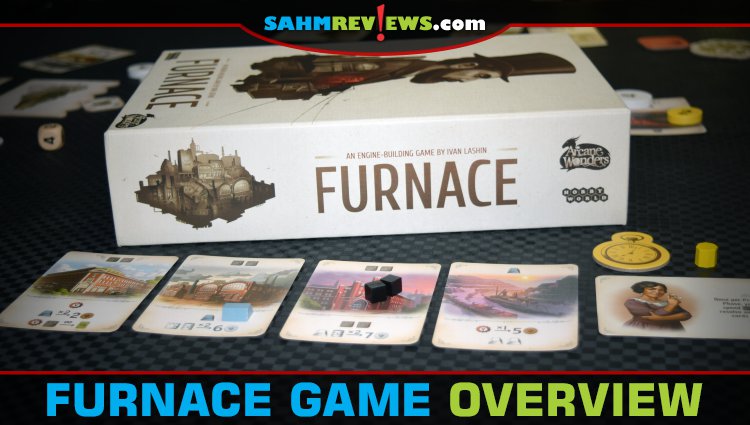 Labor Day weekend was nice since we had both the girls under the same roof for the first time in a couple weeks. Unfortunately, it was also the last time until who knows when. While Kennedy still lives here, we feel like empty nesters since she’s too busy with school, extra-curricular activities, sports and work to ever be home. Scott and I miss the days of being able to sit down for a family dinner then clear the table to play games. We continue to invite friends over to play games on the weekends, but seldom are we able to get anyone to commit to a weekday evening, let alone a weekday! Looking for games for two players seems to be something we need to be more open to. When I first read about Furnace from Arcane Wonders, I thought it would be the typical “best with 4-players” type of game. When I started reading more, I discovered it’s actually quite elegant with only two.

Many hobby games such as Red Rising offer a solo mode so players can enjoy it even when they cannot get a group together. Many multi-player games can be played by two, but often don’t offer the same experience as with a higher player count. Furnace utilizes an AI player that throws some uncertainty into the equation, making it a nice step-up from simply playing head-to-head. Set up the game by independently shuffling the decks company cards, start-up cards and Capitalist cards. Each player takes random start-up and Capitalist cards and the “worker” tokens of their chosen color. If only playing two people, assign the die and a color to the AI. All players collect the starting resources indicated on their start-up card. Set the round counter alongside the company deck then selet a player to begin.

Each player has a unique ability as noted on their Capitalist card. There are only five different so for the most part, you’ll see the same ones show up quite frequently. These bonuses ranging from providing you an extra worker, earning extra resources and utilizing resources instead of upgrade tokens to improve your company. Furnace is an engine-builder and the company cards are the meat of that. Each two-sided card (basic and upgraded sides) includes a compensation (across the top), a basic effect (first line item) and an upgraded effect. We’ve featured several engine-building games such as Ecos, Wingspan and Colony, but Gizmos is one of my favorites. Sans the fun marbles, Furnace reminds me a lot of that. Taking place over only four rounds that consist of auction and production phases, you have to be mindful from the very beginning exactly what you want to do.

Each round begins with an auction. Shuffle and deal a row of company cards (based on the player count) to the center of the table. Players will utilize their numbered “worker” tokens to bid on the various company cards. Starting with the first player and moving clockwise, players select a card and place one token of a unique value on any card where they don’t already have one.

If there are only two players, the AI rolls the die on their turn then places their lowest value token on the card based on that number (left to right). After all have been placed, the cards are resolved from left to right. The player with the highest number will be awarded the card, but first all the other players are compensated for their efforts.

That’s right. One of the unique features of Furnace is that even if you don’t win a card, you’ll still potentially earn something. The compensation non-winning bids receive is their token value (1-4) times the value listed at the top of the card. So in addition to creating an engine from the cards you own, you’ll also be able to earn supplies, upgrades and points for those you don’t. Once all players have earned their respective compensation, the cards are given to the winning players.

The second part of each round includes production. Depending on whether you’re playing at a basic or advanced level of gameplay, you’ll either resolve cards one at a time in any order (basic) or resolve from left to right like a program (advanced). Production may include earning supplies or money/victory points, upgrade tokens or even upgrading your company. If you’ve managed to upgrade your cards, you’ll flip them over and the upgraded effect is no longer greyed out and can be used for the remainder of the game. After all players have completed their production, the first player token passes and a new round begins. At the completion of the fourth round, the wealthiest player (most victory points) is the winner.

The concept of Furnace is easy to understand and the gameplay equally as simple. It doesn’t take a long time to learn, and can be played fairly quickly if everyone is paying attention. Copies of Furnace are currently available on Amazon as well as direct from Arcane Wonders. You can check with your local game store for availability, too. I expect Arcane Wonders will be turning up the heat on their Facebook and Twitter channels as we hit the postponed dates of “summer” conventions including Gen Con and Origins. If you enjoy engine-building games that don’t have too much fuss about them, check out Furnace.

What is your favorite engine-building game?