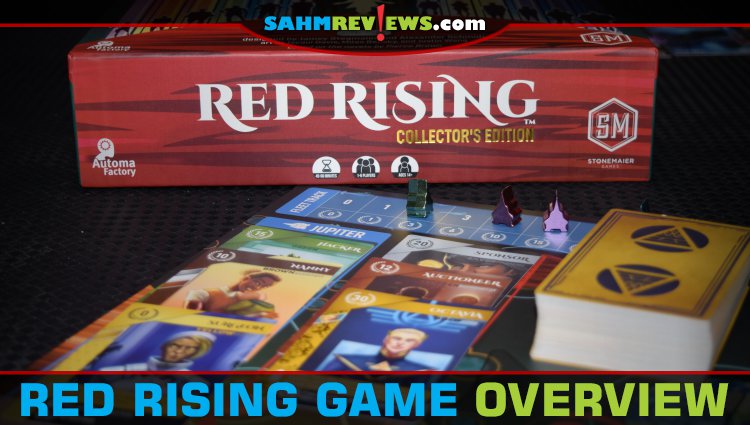 Have I mentioned a few times lately that the girls have been ridiculously busy. Between Kennedy’s new job at Starbucks and planning a graduation party with Madison, we really haven’t had a lot of time to sit down and play games. We’ve been able to sneak in a few quick thrift store games, but not much else with the kids. The Quad Cities has a robust gamers base who used to regularly get together. It’s been a while since we’ve been able to do that and we really miss those weekly gaming meetups. For the past couple of years, some friends have coordinated a gaming retreat weekend and this past weekend was the latest. About 30 of us got together to do nothing but play games, relax, eat and enjoy the company of like-minded friends. I would like to say that I played hundreds of games during the time away, but in reality I was able to play multiple sessions of Gloomhaven and a handful of others including Red Rising from Stonemaier Games. 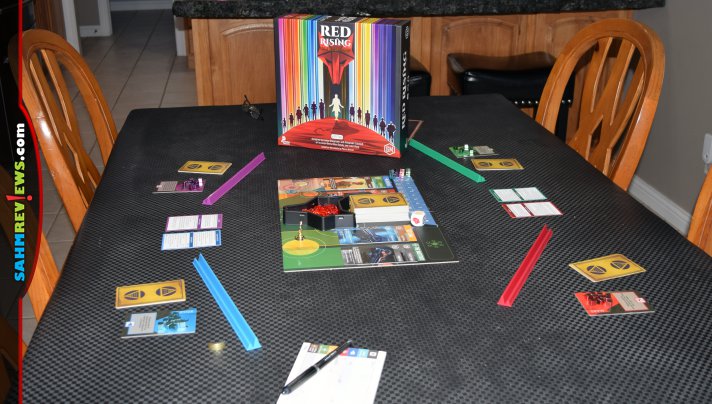 As I was playing, I had this overwhelming sense of familiarity but couldn’t exactly place why. It’s a hand-management card game, where you’re collecting and discarding cards to earn gems, influence and sovereignty. The game of Red Rising is based on the novels by Pierce Brown and highlights the dystopian society of 14 castes who are attempting to rise to power. Duhr: The Lesser Houses utilizes this same theme, but it’s a social deduction game. Tudor is a strategy game about rising to power, but that’s a worker-placement game. I’ve been struggling to figure out what it reminds me of. Then it finally dawned on me. At it’s heart, if you understand how to play gin, you’ll easily pick up on how to play Red Rising. Keep that in mind as you read the rest of this overview. To set up, each player selects a color and takes the associated influence and fleet tokens, reference card and house tile describing their unique ability. Place the board in the center of the table with the die, sovereign token and helium gems. Shuffle the deck of character cards and deal five to each player to form their starting hands. Reveal two cards onto each location on the board then place the remainder in the center of the board to use as a draw deck. 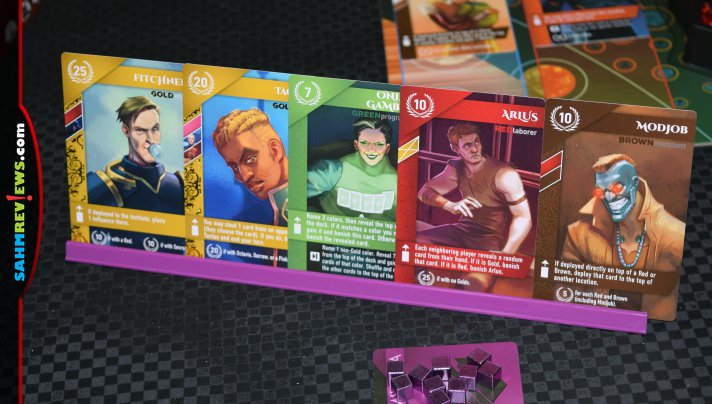 Each card is color-coded, indicating its associated caste group. In addition, the top of each card shows its end-game value, name and color. The left bar displays stripes if that card works in conjunction with others in the deck. The bottom of the card is what you’ll utilize and reference most throughout the game. Each card has an in-game “deploy” or “block” ability written immediately under the character’s image. On the very bottom of the card you can find any end-game bonuses or abilities that character has. 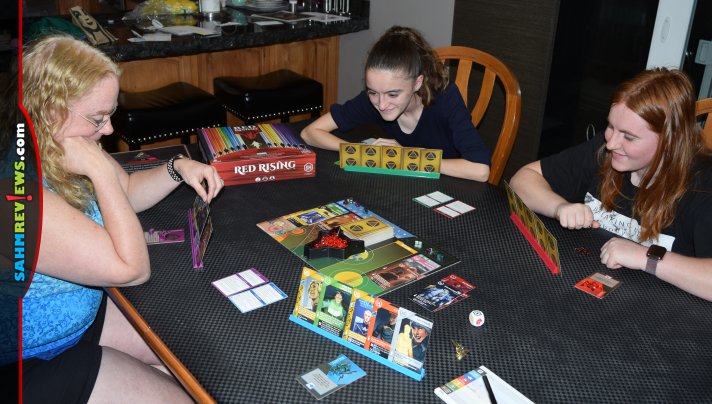 On your turn, you’ll either Lead or Scout. If you opt to lead, then you’ll place a card face-up to the board and take the deploy action listed. There are a variety of deploy actions that vary from raising your influence to taking rearranging cards on the grid. After completing that action, either take the first card from any other column and earn that column’s bonus or take the top card from the draw deck and roll the die for a random bonus. Scouting, on the other hand, allows you to keep your hand in tact. Draw a card from the top of the deck and place it in any location. You won’t earn the deploy action, but you will gain the bonus from the location where you place the card. 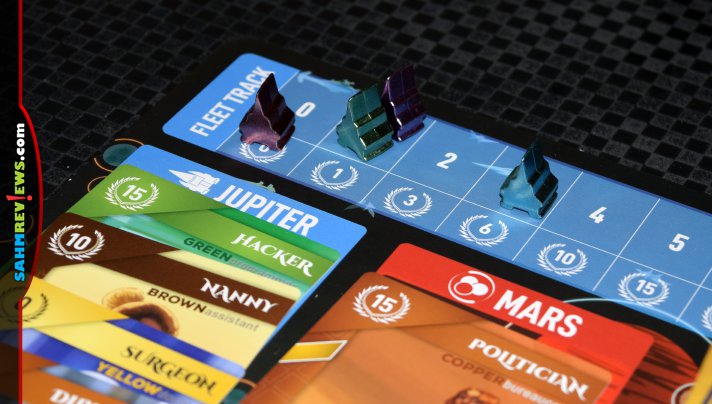 Each location has a unique purpose. If you take a card from the Jupiter column, you advance your token on the Fleet Track as you work to earn the noted values during end-game scoring. When you select from Mars, you gain one helium gem. Selecting from Luna allows you to take the Sovereign token which triggers the bonus on your house tile. The Institute allows you to place an influence token on that field when you select a card from this column.

Much like gin, you’ll continually rotate the cards in your hand in an effort to compile the best combinations of cards. You can earn end-game points by pairing cards together. The tough part is actually getting your hands on cards since your opponents may be working on the same ones. You may have a plan to work on a specific card bonus but if the cards aren’t available then you need to change your plans and go a different route.

The game continues until either one player has met two of the end-game conditions or all three have been met by a combination of players. The triggers are 1) seven or more helium gems, 2) seven or more influence tokens on the Institute space and 3) reaching or surpassing seven on the Fleet track. After all players have taken an equal number of turns, players calculate their points. You’ll earn points for the value on individual cards, the combinations noted on the bottom of cards, holding the sovereign token and variable amounts for the Fleet Track, Institute and helium. While there’s a little more to it than a game of gin, the idea of drawing and discarding is a simplified explanation of the mechanic that drives this game. It’s another example of how games are approachable by players of different levels as long as you understand the basics behind the game.

If you’re a fan of the novels, be sure to pick up a copy of this game sooner than later. It’s not uncommon for licensed products to no longer be available once the original contract has expired. You can find copies of Red Rising on Stonemaier Games’ website or on Amazon. Be sure to check with your local game store for availability as well. Of course, if you thoroughly enjoy the game, you may want to grab the Red Rising books to learn more about the story that drives it. As always, we encourage you to follow Stonemaier Games on social media (Facebook, Twitter) to hear about promotions and new releases along with random gaming conversation!

Have you read this series of novels?