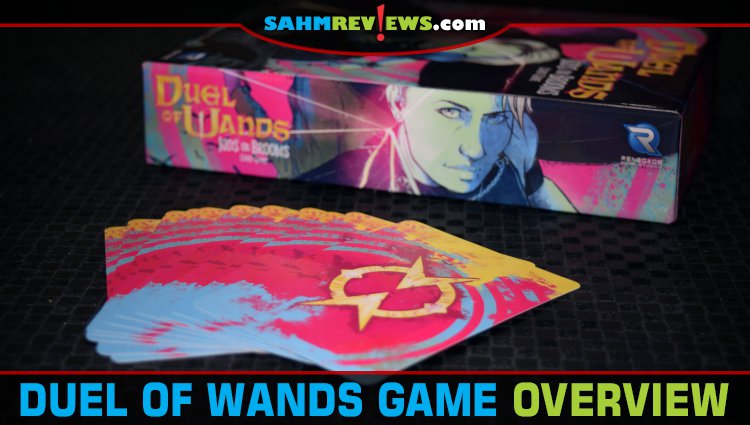 Quite often we learn about licensed IPs by playing games. If it weren’t for board and card games like Red Rising or SuperHot, we would have never known about the book or video game, respectively. Loyal fans of those properties will instantly recognize their favorite characters, landmarks or actions when they play. For those of us who are new to the worlds, it pushes us to discover what we’ve been missing all along.

Another example is the recent issue of a card game by Renegade Game Studios, Duel of Wands. We have a couple avid RPG players in the household yet weren’t familiar with the Kids on Bikes series of adventures. Originally published in 2018, it has spawned several campaigns and even a secondary RPG, Kids on Brooms. This latter example is the basis for the Duel of Wands card game.

In Duel of Wands, two players are battling head-to-head to try to prove themselves a better spell caster. Inside the box are two starting decks, one for each person. These contain standard spell cards, and the decks are identical to each other in terms of abilities.

Seven unique spell cards are mixed and two are randomly given to each spellcaster. These are shuffled into the original eleven standard spell cards. Once players have become comfortable with how the game is played, upgraded spell cards may be swapped into the deck to add variation to each one. Both players draw a hand of four cards from their shuffled deck to begin the game.

The goal in Duel of Wands is to either force your opponent to run out of cards or to banish their Psyche card (one of the original eleven cards). Players take turns performing one action from two possible. First, you can cast a spell by playing a card from your hand of four. Follow the instructions on the spell card and discard it to one of two piles, depending on what the card dictates. Most are simply placed in the Cast Spells pile, while stronger spells are meant to be used once and are immediately sent to the Banished Spells stack.

Your other action option is to not cast any spells and simply discard one to the Cast Spells pile. Timing is everything in Duel of Wands. The current spells available to you in your hand may be ones you’d prefer to use later. Discarding is a way to save them for later in the game. Either option requires you to play one card and you will draw back up to four at the end of your turn.

Refreshing is the method in which you will get your discarded cards back into your deck. If you banish a spell with effects that trigger a refresh, you must refresh your deck. You will take all cards in your hand, in your Cast Spells pile and any leftover in your deck and shuffle them together, drawing back up to four. If you attempt to banish your opponent’s Psyche card and it fails for any reason, your opponent has the option of immediately refreshing their deck.

A round of Duel of Wands ends immediately when either a player’s Psyche card is placed in their Cast Spells or Banished Spells pile or if someone cannot draw back up to four cards in their hand. In both cases, their opponent wins that round. It is possible that both players will trigger the end of a round at the same time. In that case, the person who is currently the active player wins the round.

If players are experienced and have upgraded cards at the start of the game, the loser of the current round is allowed to upgrade two more spell cards and gets to choose who goes first for the next round. A game of Duel of Wands is played best two out of three!

Duel of Wands is available at your favorite local game store, direct from the publisher on their website or via Amazon with Prime shipping. If you’d like to learn more about the Kids on Bikes/Brooms RPG, be sure to follow Renegade Game Studios on social media (Facebook, Twitter)! And if you’re feeling like a lucky wizard, enter to win your own copy below!