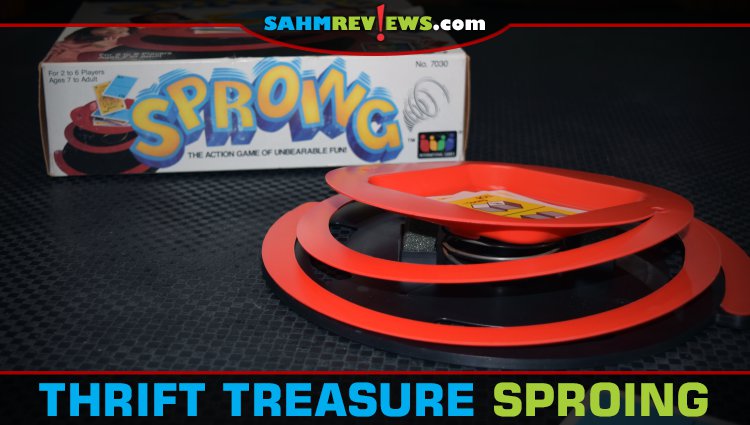 After purchasing hundreds of board games at thrift, it is easy to notice trends that occurred in the industry. The most influential invention was plastic. Once this versatile material became affordable, game makers rushed to find diverse ways to use them in their creations.

Whether taking the games vertical like in Hurry Up or Hoopla, or adding spinning pieces as seen in Battling Tops, there was no lack of imagination in games of the 70’s and 80’s. This week at our Goodwill we came across another example of plastic-gone-wild in the 1988 game of Sproing by International Games, Inc.

I would compare Sproing to a game of UNO with a timer. Only the timer isn’t fixed. The timer IS the board and is comprised of a solid piece of plastic cut in a spiral with a metal spring underneath. Also in the box are fifty-four numbered cards, a black plastic bag, six colored plastic chips and two custom dice. Set up for a game of Sproing by placing the pop-up tray in the center of the play area, putting the six chips into the plastic bag, and setting the dice near the tray. Once a dealer is chosen, they will shuffle the cards and deal out seven to each player (Sproing supports up to six participants).

The game begins with the dealer pressing down on the Sproing card tray so that it engages with the rubber suction cup underneath. This is the timer! When the cup releases the tray, it will pop upwards, signaling the end of the round. The dealer also plays a “1” card from their hand onto the tray. If they don’t have a one, they must draw until they have a card they can play.

Turns pass to the left with each player either playing another “1” card or a card one unit higher than the most recent number played. There are also yellow action cards with numbers which, once legally played, force the next player to take an action. They must follow the instructions on the card before playing one from their hand!

“Roll the Dice” challenges you to roll the two custom dice until you roll what is required by the card. For example, if the card played says “Roll No Sproings”, then you must continually roll the dice until they both come up blank. “Find a Colored Chip” makes you draw one chip from the bag until you get the color indicated on the card.

“Count” or “Count Backwards” is a verbal challenge. You must count aloud from one to ten (or ten to one), saying “Sproing” or “Sproing Sproing” before or after each number (the card will dictate the exact requirement). Lastly, a “Reverse” card reverses the order of play and requires one of the above three actions of the previous player instead of the next. Turns will continue in the opposite direction until another “Reverse” card is played.

If the tray pops up during your turn, you’ve been Sproinged. You take all the cards in the tray and place them face-up in front of you. The tray is reset, and another round is started with the person who got Sproinged playing a “1” card or drawing until they do.

A hand of Sproing ends when either one player plays their last card from their hand, or all the draw cards are used up. Players receive one point for each blue card and two for each yellow either left in their hand or in the face-up piles in front of them. However, if you were able to go out by playing your last card, you receive zero points, even if you had cards in front of you. A new hand is started in the exact same manner and continues until someone scores fifty or more points. The person with the lowest score at the time is the winner of Sproing!

In case you’re wondering, the average time before the suction cup releases should be around ninety seconds. As the game gathers dust, the timer will get shorter. A quick cleaning with soap and water will bring it back to new. You can also leave the cup a little wet to get it to grip longer or wipe it dry for a shorter round! Used copies are available on eBay for a wide range of prices. If you can find it at thrift for a dollar or two, it’s worth it for an evening of entertainment!

Do you have a favorite vintage plastic board game?