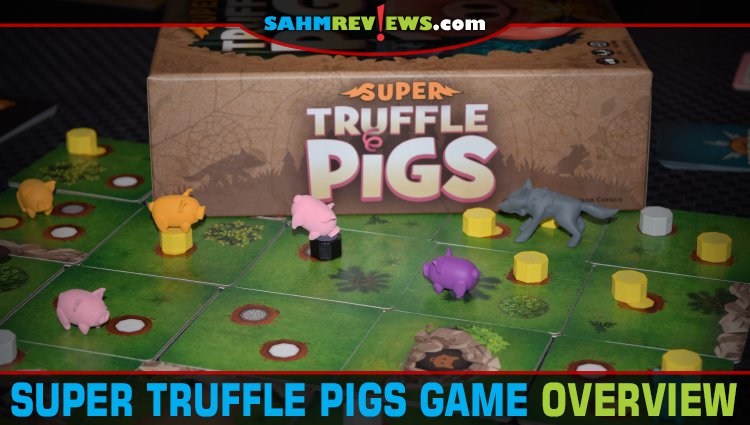 I remember entering a coloring contest when I was in elementary school; second grade if memory serves me correctly. My school was in a rural area where a good portion of the kids, including my best friend, Liz, were from farm families. As I proudly colored the pig in an adorable shade of pink, Liz provided her honest feedback, “Pigs aren’t really that color.” I had been to her home many times and knew she was right. It was such a memorable incident for me that I still recall which classroom I was sitting in and even the placement of my desk. Ever since that time, I’ve always made a mental note of any depiction of a pig that wasn’t a photograph. Here I am, decades later, playing a board game and smiling as I think of my best childhood friend.

The game that spurred this recent brain-poke is Super Truffle Pigs from Bicycle Games . As the name suggests, these pigs aren’t about the precursor to bacon, but rather the treasure-hunting variety. The goal of the game is to be in charge of the pigs that dig up the most value of truffles. To begin, each player selects a color then collects the associated pig meeples, player board, directional cards and level marker. Shuffle the forest tiles and crate a field then randomly populate it with the appropriate colored truffles. Place one brown wolf on the brown den and set the other wolves to the side of the board. Each player starts with one pig in each of the two secret path tiles. The Super Power Cards and Wolf Board are set on one side of the forest, indicating which direction will be considered north. Finally, all players draft mission cards and get ready to hit the fields.

A round consists of one starting player rolling the wolf die followed by each player taking a turn, the wolves moving, replenishing Super Power Cards then passing the wolf die to the next player to start the next round. It would be a very different game if it was just a bunch of pigs running around sniffing out truffles buried in the ground. But it’s not. There are wolves who have an interest in pork. Thankfully, there isn’t anything gory about the game, pigs are simply removed from the board when they cross paths with one of these unfriendly beasts. So let’s start by talking about the wolf die because it’s what indicates how much movement they’ll get on their turn. The faces include (two) one direction cards and one of each of the following: two direction cards, new wolf with two direction cards, new wolf with two direction cards and a sleeping moon.

After the round’s starting player rolls the die, they take actions as noted on their player board. Each player starts with three actions, but it can be upgraded during the game to a maximum of five. As part of your turn, you can spend actions to move, dig for truffles or use super powers. Movement costs one action per tile you’re moving across so you can’t move a lot. Makes sense because the only time I’ve seen pigs run fast is as the county fair.

There are three colors of truffles, indicating their quality level and they aren’t all worth the same, even within their type. The values on the bottom vary and you won’t know if it was a success until your pig finds it and gets it out of the ground. White are the lowest quality and only cost one dig action. Their values are either 0 or 1 with a 50% chance each. Yellow are the midgrade truffles with values ranging from 0-2. Getting one of these out of the ground will cost you two dig actions and your chances of getting a 1 or 2 are 70%. The highest quality truffles are black with values always ranging from 2-3 points. Unfortunately, it will take three actions to dig these treasures up. One thing that makes Super Truffle Pigs very family-friendly is that players cannot steal from each other. Once you’ve started to dig, you’re ensured you’ll get to finish on your following turn as long as you don’t quit or run from a wolf. Any truffles that have been successfully acquired are added to your player board.

As an alternative to moving or digging, you can spend actions on Super Powers. These powers range dramatically from sneaking a peek at the value of a buried truffle to knocking out wolves or allowing your pig to fly. The cost of each is displayed on the top of each card. It’s worth noting that some white and yellow truffles don’t have victory points, but do offer free use of super powers.

In addition to the value of acquired truffles, you can also earn victory points by completing missions. Pretend Gordon Ramsey is sending you out to find a specific assortment of truffles. Reveal your mission card. At the end of the game, you’ll earn those points in addition to the values on the bottom of the truffles. You can use truffles from completed missions to upgrade your level. At any point during your turn, you can opt to trade in two truffles to upgrade to the next level. Any truffles used for upgrades are returned to the box.

The final thing you’ll do on your turn is play direction cards face-down to the wolf board. The number of cards you played is determined by the result of the roll for that round. During the wolves’ turn, these cards are revealed and all associated with that color move the designated spaces, wrapping around to the other side of the board if they go too far in one direction. If they pass through a space with a pig, that pig is scared and runs from the wolf (pig is removed from the board). If you’ve lost both pigs from the board, you may opt to pay two truffles to the player of your choice in order to return one of your pigs to a designated starting point in the forest. Despite the inclusion of wolves, the pigs simply flee, keeping this kid-friendly.

A games of Super Truffle Pigs continues until a round ends with three or less truffles or only one player remaining in the forest. Calculate points from missions and truffles and the player with the most wins. If you’re ready to add this family-friendly treasure hunt to your game shelf, you can back Super Truffle Pigs on Kickstarter. We don’t have confirmation about where it will be available after that, but it will most likely be for sale on the Bicycle Games’ website or on Amazon. Dig up more details on Bicycle Games’ social channels: Instagram and Facebook. Oh, and if you’re wondering whether I think Liz will approve of the colorful pigs in the game, I’m sure she would because they’re pretty cute. I’ll have to ask about that. As for the coloring contest… I doubt she even remembers that at all!

Have you ever wanted to hunt for truffles?