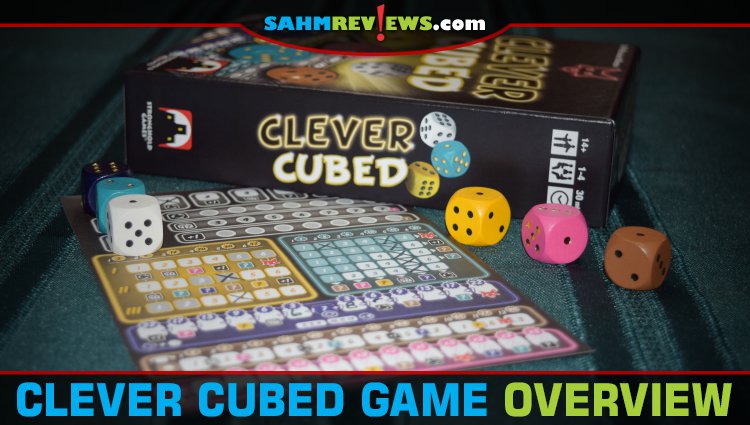 Getting old can be so frustrating. Half of the time I can’t remember the reason for walking into a specific room and the other half I experience feelings of déjà vu. Until recently (when we stopped regularly seeing people in person), I was awesome at remembering names and tidbits about people’s lives. But when you go for a year and a half or so without constantly seeing the same people, it’s a struggle to even place a name with a face. Facts and details have become a whisper because I haven’t needed to work that portion of my brain. While I may be getting old and my memory is going for some things, I’m confident that I’m not totally losing my mind. (No comments from the peanut gallery, Scott.) When we received a copy of Clever Cubed from Stronghold Games, I knew it was familiar. We have That’s Pretty Clever and Twice As Clever on our game shelf already!

You may be asking how we feel about adding another similar game to our collection. First, you can’t have too many games so there’s that. Second, I grew up with a relatively small collection of games and two of those were versions of Yahtzee. Both fit a niche and that’s the same situation here. While Clever Cubed is an iteration of That’s Pretty Clever, it’s a different game with many different rules. So hand everyone a score sheet, give the dice to whomever is going to be the starting player then place the tray (AKA the box with the tray image) in the center of the table and let’s get started!

As I mentioned, this game is similar to its predecessors, but does have several different rules. The rulebook clearly notes these changes. I’m not referring to a few gameplay corrections, but in-depth revisions that give Clever Cubed its own identity.

As with the prior versions, Clever Cubed works with the idea of active and passive players. Dice rotate around the board, but even when it isn’t your turn to roll, you still get to be involved. The active player will take three rolls and on each one will select a die, filling in the appropriate space on their scoresheet after each roll.

But it isn’t as simple as selecting a die and moving on. The active player surrenders dice with values lower than the one selected and those are placed on the tray. These dice create the pool that the passive players will utilize at the end of the active player’s turn. This process holds true for each of the rolls so if you select a six on your first roll then you won’t have many dice left for your second and third rolls. After the third roll, the passive players select one die from the tray and follow the rules based on that color.

There are five different sections of the scorecard that correspond to five of the six colors of dice. The sixth die is a wild. If the active player selects the yellow die, they mark off the associated number based on which roll it aligns with. Passive players mark the grey boxes if they select this color. The turquoise area allows players (both active and passive) to mark extra items for each additional die that matches the pip count of the turquoise die. The blue, brown and pink areas are linear and all involve making choices regarding the next available space.

Each of the different sections provide opportunities for bonuses as well. Some are earned when you complete a section or two adjoining spaces. Others trigger when you reach that particular space. Bonus types include selecting the value of a particular color, taking additional actions or earning bonus points at the end of the game. Value bonuses must be taken immediately when they are earned (regardless of whether you’re the active or passive player) while action bonuses may be reserved and used when strategically more appropriate.

Clever Cubed can be played solo or with up to four people. The number of rounds involved varies based on the number of players. After the designated number of rounds, total the points earned in each section to determine the winner. Clever Cubed is affordably priced on Amazon, making it a good gift option for your own family or someone else. Roll over to the Stronghold Games website, Facebook or Twitter to see what other games are releasing in coming months.

Does your collection includes games that are similar?