When it comes to raising our kids, we try to find ways to open doors to conversations. Board games continue to be a good avenue for that. While a game may be dungeon-themed or we are playing games about trees, we talk about the real world similarities or impacts that are evident in them, the game mechanism or whatever. We recently played Duhr: The Lesser Houses by Devious Weasel Games and the first thing I recognized about it was the similarity to current the current political scene. And when I say political, I don’t necessarily mean politics. I’m referring to the lobbying that happens beginning in our childhood. Let me explain a little more so you understand where I’m going with this…

The backstory of in Duhr: The Lesser Houses is that the Royal Family was going to elevate one of the Lesser Houses to Greater House status. Players act as one of the Lesser Houses and will work to be the one to earn that special right. It takes place over the course of several rounds of play but it isn’t about showing all the good you’ve done to earn the promotion – it’s about throwing suspicion onto your opponents and divulging their real (or perceived) scandals. Sounds like sibling rivalries, adolescent gossip or politics, doesn’t it? Nobody comes out ahead when you throw so much negativity into the world. So why do I think it’s okay to play Duhr: The Lesser Houses? Aside from engaging in the conversations about it, it allows you to get it out of your system. That’s win/win in my eyes. 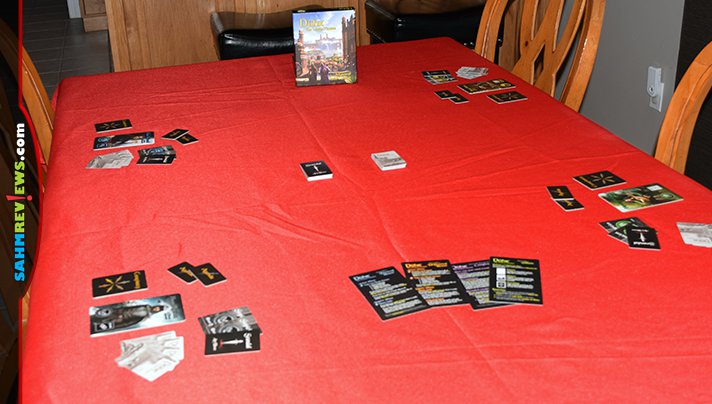 To get an idea how to play Duhr: The Lesser Houses, I encourage you to start by reading our Bemused game overview as the two share a lot of characteristics in game play. Both are social card games where you’re taking actions on other players in order to achieve your objectives. In Bemused, the game revolves around muses trying to elevate their protégé whereas in Duhr: The Lesser Houses you’re fighting to elevate your house. To set up the game, give each player 1 House card at random along with one Scandal card. Take the ten suspicion cards that match the player Houses. Each player receives two that match their house then the rest are shuffled together to form a general supply stack referred to as the Webs of Suspicion. Everyone receives four cards from the Web of Suspicion along with one black and one white Agenda card. 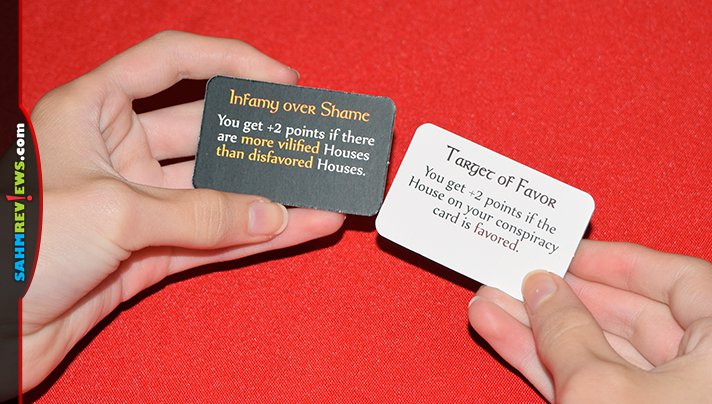 You will select one of the two agenda cards to determine your secret goal for the game. The white agenda cards focus on the individual Houses and are easier to achieve. The black agenda cars are more difficult as they involve multiple Houses. Achieving your agenda card goal will award you bonus points and since the person with the most points wins, bonus points can be pretty important. 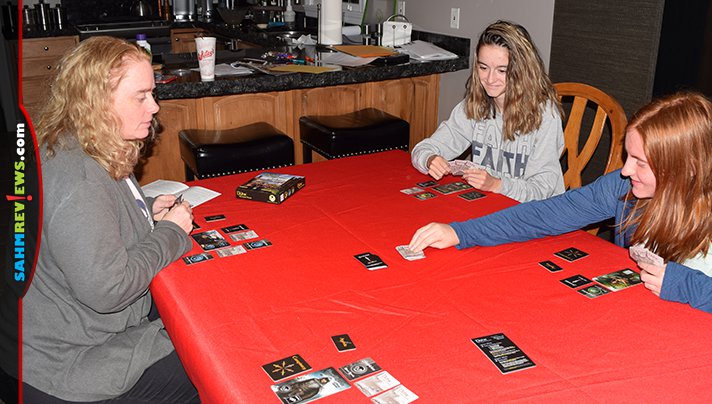 The game focuses around whether houses are in favor or disfavor and the options available depend on your standing. Favored Houses receive the support and backing of the people while Disfavored Houses are distrusted. Each round consists of an Action Phase and an Acquire Phase. 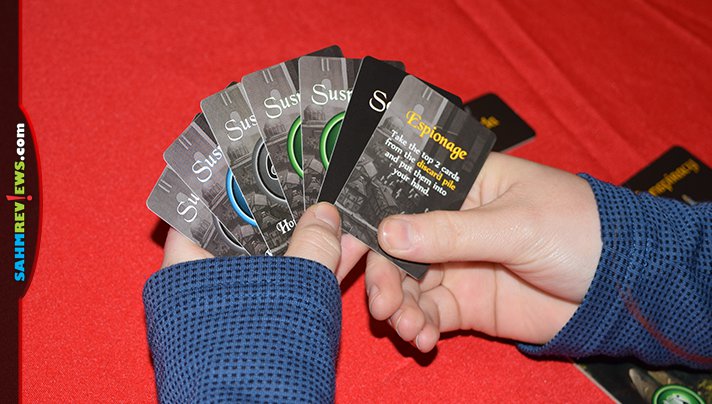 During the Action Phase, you perform one of the five possible House actions including 1) raise a suspicion, 2) create a scandal, 3) trigger an event, 4) use an ability or 5) make a masterstroke. The Acquire Phase represents your efforts to dig up dirt on your opponents and you do this by adding cards to your hand. You’ll draw one or two cards depending on how many cards you already have in your hand. 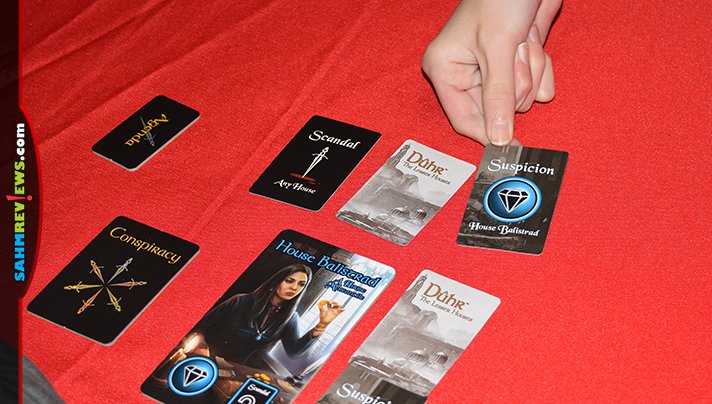 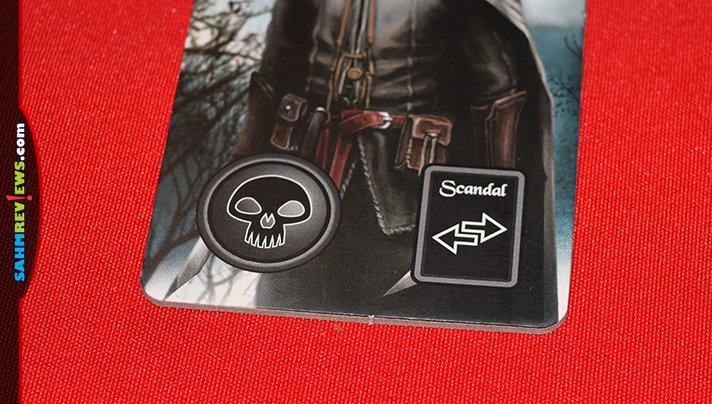 You can activate the ability of your House by discarding a suspicion card that matches your own House. Each House has a different ability so this adds some diversity to each time you play the game. The final action you can take is to make a masterstroke. To do this, you discard a pair of matching suspicion cards to reveal a concealed card, remove or discard revealed scandal cards, move a scandal card from the Web of Scandal onto any favored house or negate events, abilities or other masterstrokes.

If your House is favored then you have two additional actions available and you’ll remain favored until there are five cards played on your House. In other words, your opponents are raising suspicions and gossip about your House that are causing the powers that be to frown upon you. Once there are three scandals revealed then you become Vilified which offers a completely different set of rules! Throughout the entire game, you can speak openly, make deals, lie, swindle and break previously made deals. While it’s not good practice in real life, all is fair in the quest to earn the title of Great House!

A game of Duhr: The Lesser Houses is over when the number of favored Houses is one or none. Players then earn points based on their standing (Favored, Disfavored, Vilified) and the number of suspicions and scandals they’re involved in. Players then reveal their agendas and add those bonus points to the final score. The player with the most points earns the right to become elevated to Great House status.

Duhr: The Lesser Houses can feel a bit confusing at first, but the overall game play is fairly simple since you’re only able to take one action per turn and your options are pretty limited by the cards in your hand. While the rules indicate that 4-6 people can play it, I’m going to admit that playing with 6 is a better option than 4. If you enjoy social games where there’s a lot of “take that” then this game is perfect for your game night adventures. Swing by your local game store and ask about copies or order direct from Devious Weasel Games or Amazon. Of course, you can always play it with teens just to teach them lessons on what NOT to do in real life!

How do you feel about people creating turmoil using scandal and suspicion as their weapon of choice?