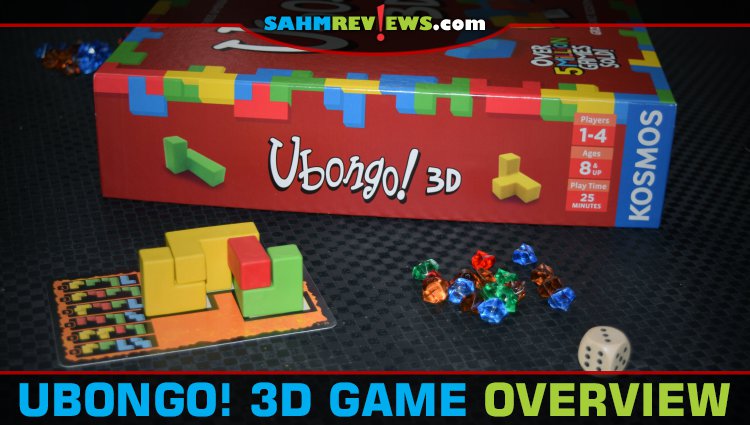 In my Red Rising game overview, I confessed that we don’t get to play games as often as I would like. During our gaming retreat, there was an an assortment of genres being played including some games that took hours and others measured in minutes. While Scott typically would be perfectly happy playing one Stefan Feld game after another, he decided to keep more shorter games in the mix this time around. One such example was Ubongo 3D from Kosmos, a 3-dimensional follow-up to the Ubongo puzzle game we told you about a couple years ago. Unlike Mental Blocks, Tuki and Team 3 where you can see the profile of the project, this polyomino game only lets you see the outline of the base. The rest is up to you to figure out. 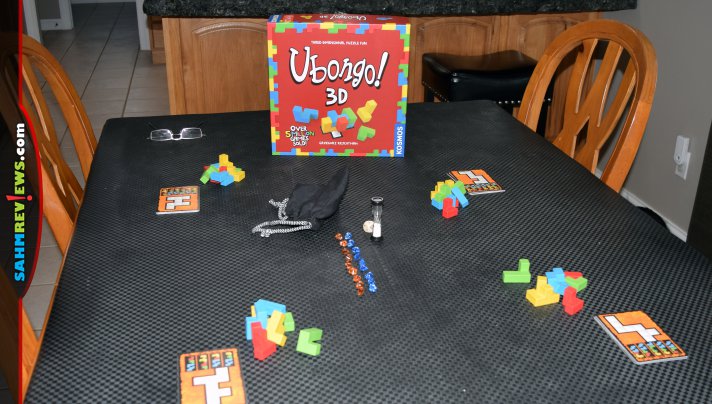 There isn’t much to the setup of Ubongo 3D. You have to decide on the difficulty level first. Green is the easiest followed by yellow, orange and the highest difficult being red. Give everyone a set of polyomino pieces and nine puzzle boards of their chosen difficulty level. Create two lines of nine gems each, one row of sapphire and the second of amber. Set the hourglass and bag of additional gems within reach of all players and give the die to the first player. 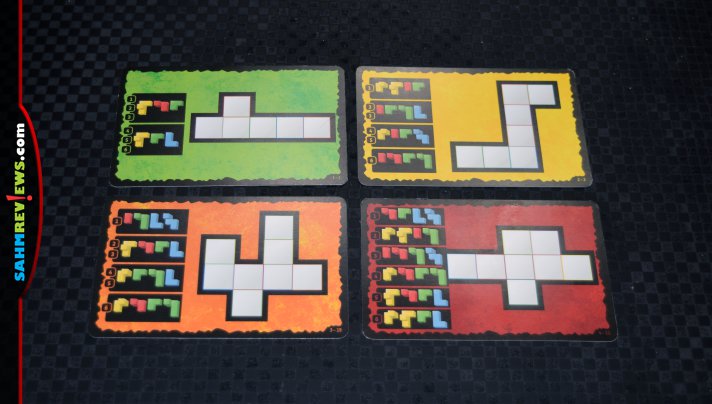 Each card is double-sided and reflects multiple combinations of pieces that could be used to fill the outline on that particular card. Each card is different so you won’t be doing the same configuration as the person next to you. Ubongo 3D takes place over nine rounds. At the beginning of each round, players turn over the board for their chosen difficulty level. The player with the die rolls it to determine which set of the puzzle combinations will be used for the round. 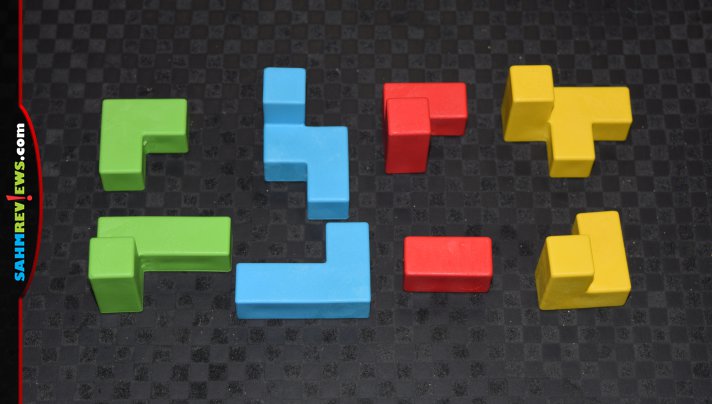 Each player has the same set of polyomino pieces, but they aren’t all used for every round. When the die is rolled, you’ll reference the side of the card to determine which ones fit into your specific puzzle. 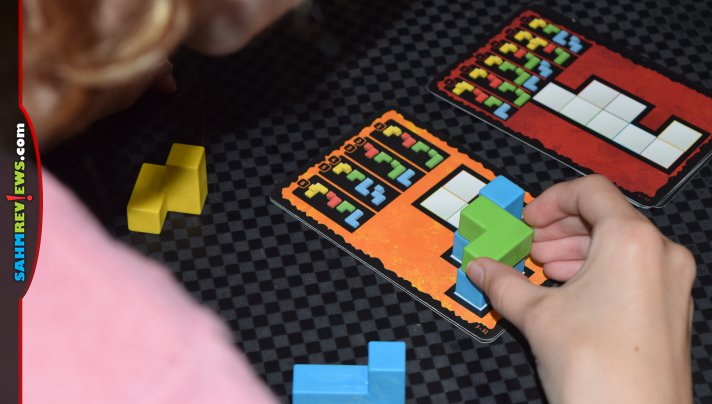 As soon as the result is revealed, another player flips the hourglass. Each player then grabs the pieces indicated by the die result and races to stack the pieces onto their card. In the correct configuration, the pieces will fit exactly within the outline with no overhanging pieces and on only two levels. 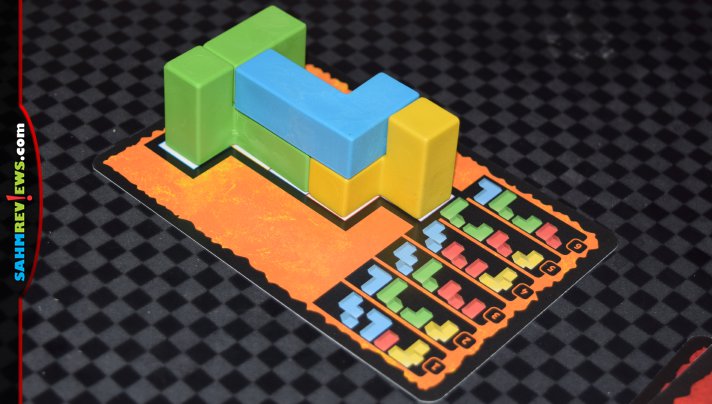 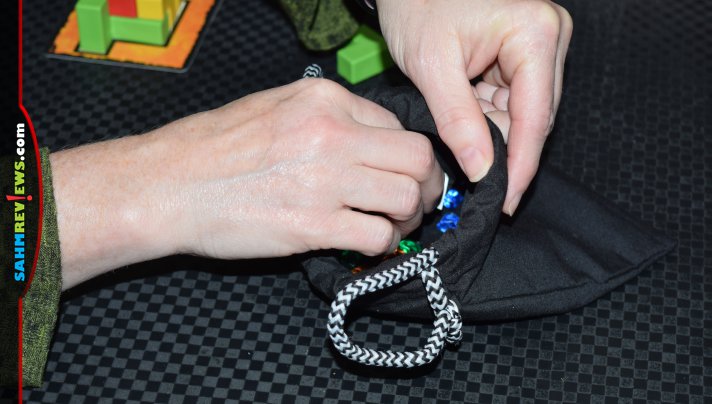 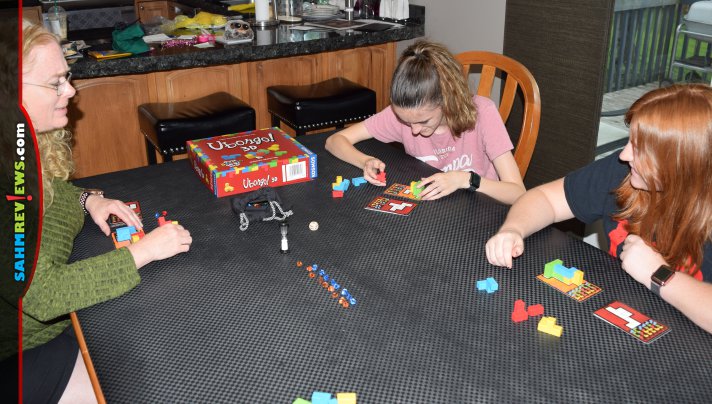 Everyone selects their next card and the process continues. At the end of the ninth round, players earn four points for a red gem, three for blue, two for green and one for brown. The randomness of grabbing from the bag ensures that a player who isn’t always the fastest is still able to claim victory at the end.

I wasn’t surprised by how much I enjoyed Ubongo 3D because I’m a huge puzzle fanatic. But I was surprised by how much frustration it caused when you couldn’t “see” how to put the pieces into the outline. Because there are four levels of difficulty, each card has many options and a die dictates which one is selected, Ubongo 3D has a lot of replay value. In addition, there’s a solo variant that allows players to go it alone. If you are a fan of the Ubongo series of games, add a copy to your Amazon cart, order direct from Kosmos or look for it at local stores where games are sold. It’s no puzzle figuring out that Kosmos has a ton of great products available. Check out their Facebook and Twitter feeds for a glimpse of some of their offerings.

What’s an example of a game that makes you want to flip the table?