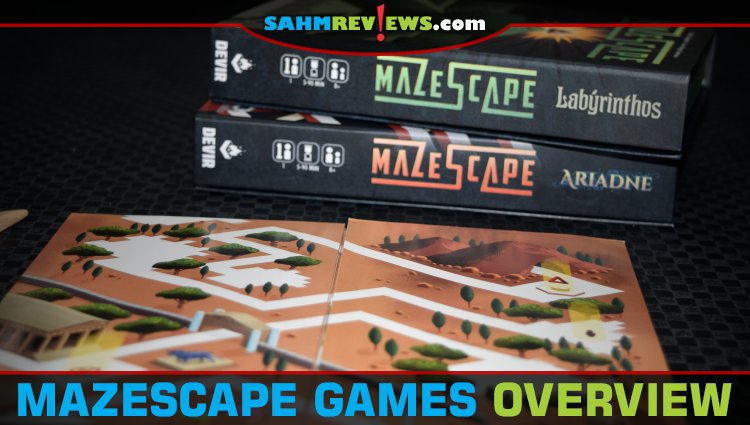 Puzzles come in all shapes and sizes. I’m not referring specifically to jigsaw puzzles, but puzzles in the general sense. There are the types of puzzles you find in newspapers and magazines like Highlights and Games Magazine. You know, like word searches, crosswords, logic puzzles and mazes. On the other hand, you have more tactile options jigsaw puzzles and handheld ones like Rubik’s. And wrapping up the category are some of my favorites: puzzles disguised as a game such as Ubongo, escape rooms like the Exit series, and brain teasers such as Curios and MicroMacro. Most of these are geared toward multiple players, but the Mazescape series from Devir is designed as a solo game!

Ready to learn how to play? I’ve had some pretty simple game overviews, but this one may be one of the easiest in a while. Each Mazescape box includes several scenarios. Start with the first one and grab the pointer. That’s the setup.

Mazescape, as the name implies, is a maze. You’ll start at the designated marking with a goal of getting to the designated ending. There are only a couple rules. You cannot pick up the pointer nor can you flip a page that the pointer is resting on.

As you go through the maze, you’ll reach dead ends that only become available by opening and closing the map. For those of us who experienced pre-digital, paper maps, this will bring back some memories!

There are secondary objectives you can also try to achieve. These include locating the flag, activating a lever or finding a key to open a door or picking up and carrying something from one part of the map to another.

When you reach your final destination, you’ve completed that Mazescape and you can move on to the next one! Some of the games in the series offer additional challenges. As an example, in Mazescape Layrinthos, once you’ve managed to navigate all seven in the set, you can participate in one final challenge and locate all the lanterns. Each game is unique and doesn’t get destroyed as part of the experience. Try it over and over until you’ve mastered it then hand it off to another puzzle or game fanatic to try their hand at it! Check with your local game store about availability of Mazescape games or order a copy online. Visit Devir’s website and follow them on Facebook/Twitter to learn about their many other games!

How old where you when you first discovered mazes?