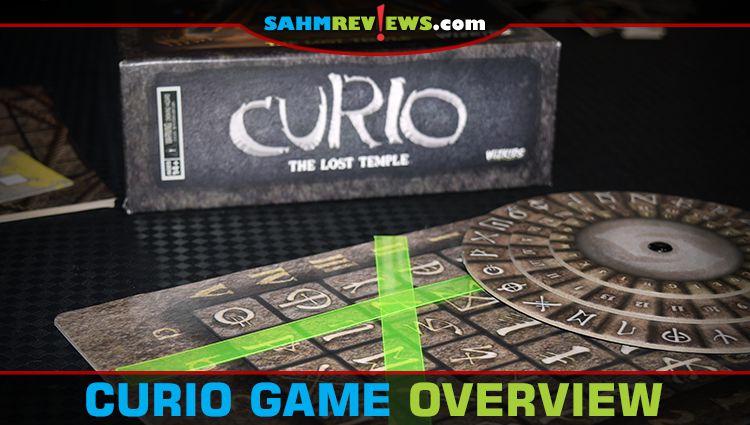 Let’s talk for a minute about favorite game types. It’s no secret that I have a preference for abstract games and ones that are brain-burners, typically Euro games. Nicole, on the other hand, loves anything with a puzzle feature. Herbalism, Cryptid, Alchemists, Detective and the entire Exit series are among the types she prefers to play. My daughters are into anything memory or speed-related since they know they’ll have an advantage over us, thanks to their youth.

I wonder what would happen if we combined the deductive reasoning needed in Nicole’s favorite games with the speed element that appeals to the girls. To make it fair, let’s be sure it is a cooperative game so everyone has to work together to win or lose as a team. That’s exactly what we found in WizKids‘ 2018 release of Curio! 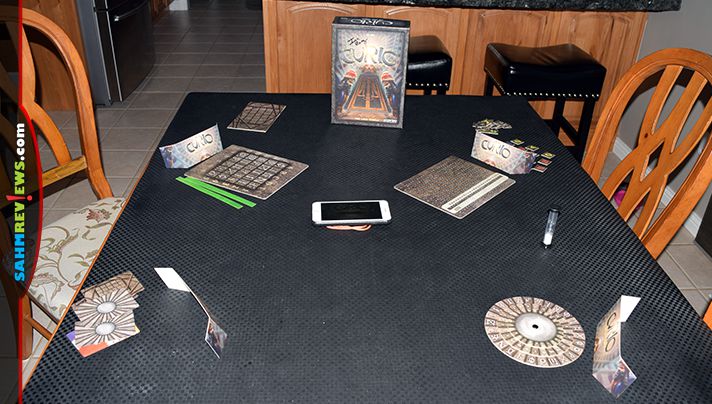 Up to five players work together trying to solve a number of puzzles in the shortest amount of time as possible. Curio includes four modules which each have a unique puzzle that must be solved. At the beginning of the game, each player will select one of the modules and they will be responsible for figuring out the solution (the Shape module is used by two players at the same time, so only use it for 3+ player games).

All players will also receive one or two Expert Cards from the other players’ modules. These card have a puzzle and the answer on them, so they are kept hidden by the person with the corresponding module. During the game, it is the responsibility of the Expert to convey the puzzle clues to the module’s owner and verify their answer without them seeing the card. At the same time, other players are trying to do the same thing since all Expert cards have to be successfully resolved in the time required in order to win! As you might imagine, table talk is the least of your worries! 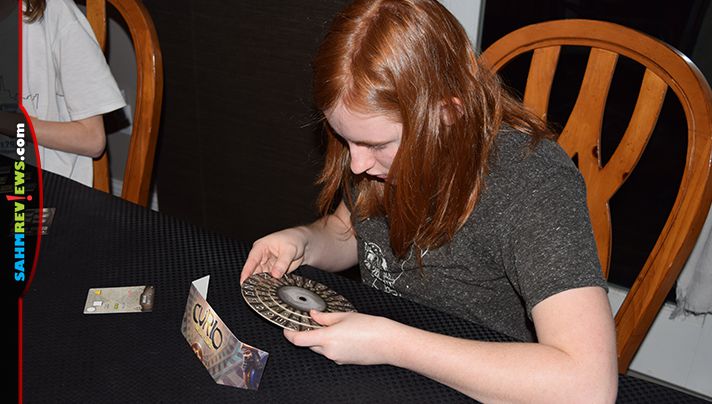 The four modules are all about the same difficulty, but have wildly different features and requirements. The Wheel has the player turning a 3-dial wheel to line up letters, numbers and symbols in order to decipher the clues. The Threads uses a board and two transparent pieces of plastic you must line up to discover the symbol NOT being used on the card. Then you use that answer to turn to a specific page in a booklet to look up the pattern shows on the card to find the final answer. 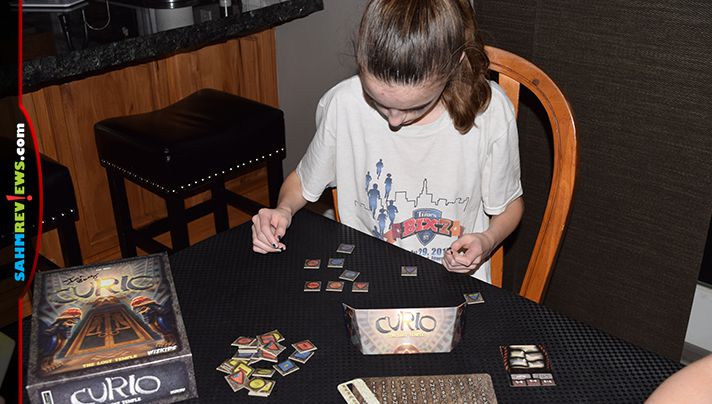 The Stones module uses process of elimination to narrow your choices down to a key symbol. The card itself is very abstract in it’s clues. For instance, a red paint splatter on the card means to remove all stones from the collection that has that color anywhere on it. Basically, you must remove all stones that match anything on the card, whether it be color, shape, symbol, etc. If done correctly, you should only have one stone left! Match this piece on the translation board to find out your key and the expert will now describe the symbols on the bottom of the card. This will help you spell out the correct word by looking up the correct letter using your newly-discovered key!

The Shapes module requires two players who each has one set of shapes, along with an expert. The expert must convey to both players which shapes to use, which areas in which to place them and then finally the order they should look at them in. By consulting their answer key, the two players should be able to determine the answer. 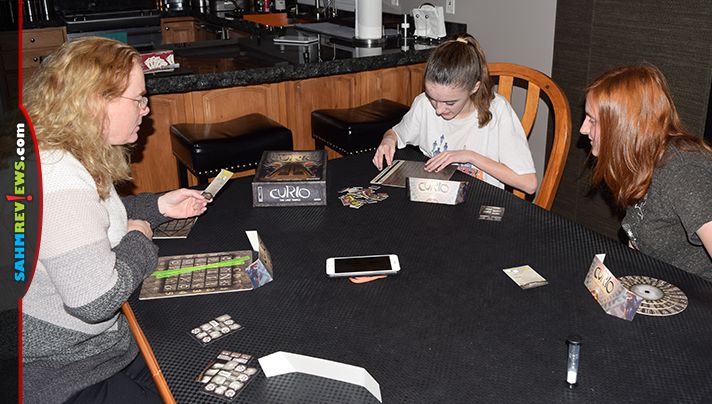 So what is this “answer”? Each module has a 5-letter word you are trying to determine. Depending on the difficulty level you choose at the start of the game, you may be able to get one incorrect. The easy level allows for one miss. The medium level allows for a miss, but another card must be drawn and solved in its place. The hard level? You guess it – no wrong answers allowed. Give a wrong answer on the hard level (or a second wrong answer on the other levels) and the entire team loses the game!

So far the deductive element along with a bit of chaos since everyone is solving at the same time sounds like it is a perfect game for Nicole. But I haven’t talked about the speed element yet! Games like Exit give you a score based upon how much time it takes you to solve their puzzle, but in Curio, not only will your time affect your score, it could cause you to lose the game in its entirety! 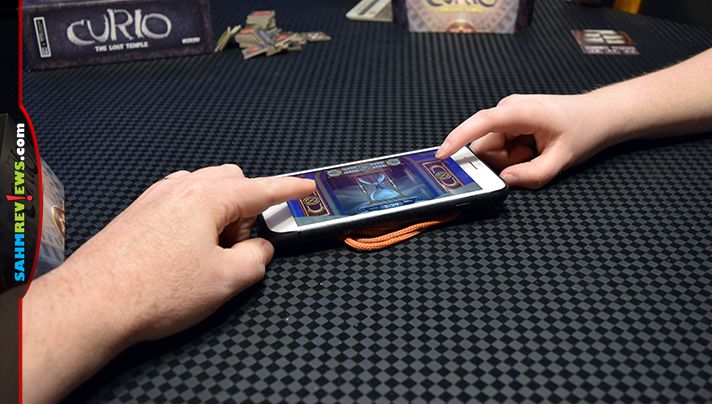 Whether using the included sand timer or the downloadable app, every 30 seconds you must flip the timer before it runs out. Everyone must be in agreement – one person can’t just flip it on their own. If using the sand timer, one player must place their hand on the included “button” on a special hourglass card before another player may turn the timer over. On the app there are buttons that must be pressed by different people in order for the time to be flipped! In both cases, if a player is holding the button down (on the phone or on the card), they may no longer speak with other players, interact with their module or remove their finger until the time has been reset!

Once all Expert cards have been successfully resolved, note the time taken to complete them and consult the scoring table, keeping in mind the number of modules completed. You’ll receive a final score ranging from 0 through 10 or a big fat “F” if you failed to complete it in a minimum amount of time or too many wrong answers were given. 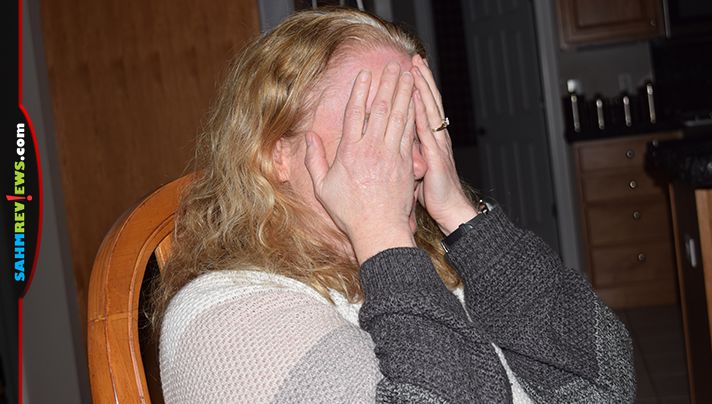 How did it work out with the combination of these two mechanics? You’ll have to ask Nicole herself! If you run into her at a game night or a game convention, ask her what she thought about adding speed to a deductive reasoning game. Hint – we’re still playing it! Curio is very different that the other deduction games we’ve featured in that not only is it completely replayable, it can be enjoyed by the same people many times over. Sure, you’ll get better with it over time, but that’s the point – to better your team’s score!

Curio: The Lost Temple can be found at both your favorite local game store and online at places like Amazon. Use WizKids’ handy store finder to see which stores are carrying their products locally or drop them a message on Facebook or Twitter to encourage them to continue making new puzzles in the Curio line!

What is your favorite deductive reasoning game?