When I mentioned last week that deduction games had overtaken our game night bag, I wasn’t kidding. Cryptid has won its place, as have others like Alchemists and Deception: Murder in Hong Kong. What I failed to mention before was there was yet another deduction game we’ve been showing off as of late – Herbalism by Deep Water Games!

You may or may not remember us talking about Deep Water Games last summer. At that time we featured Hanamikoji, a 2-player card game that rivaled any we had played before. In fact, it was the first time we went out and purchased custom-sized card sleeves for a game because we knew it would get a lot of play time. The artwork was just too nice to chance ruining it! 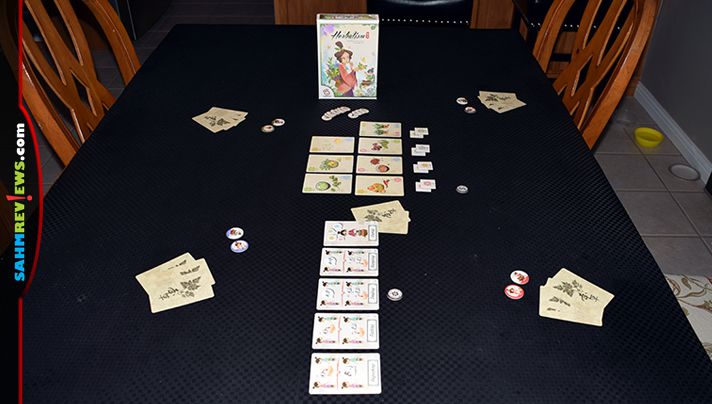 Herbalism has a different art style, but that doesn’t make it any less stunning. I would refer to its style as more serene, along the lines of Herbaceous or The Legend of the Cherry Tree. We find ourselves drawn to this type of theme, much more so than zombies and aliens (although those have their place in our collection as well). I guess we have an affinity for nature art.

In Herbalism, you and up to three other players take on the role of amateur pharmacists trying to find the cure for a pandemic (no, not the game) that is ravaging your country. You have narrowed down the possibilities to just seven recipes (Medicine Cards) and now you must race to find out which is the correct one before your opponents do!

Each person receives a Pharmacist Marker and a matching colored Cure Marker at the beginning of the game. A set of Action cards are dealt out to the center of the play area, as are the seven previously-mentioned Medicine Cards. Colored prediction markers are also placed within reach of all players and sorted by color. 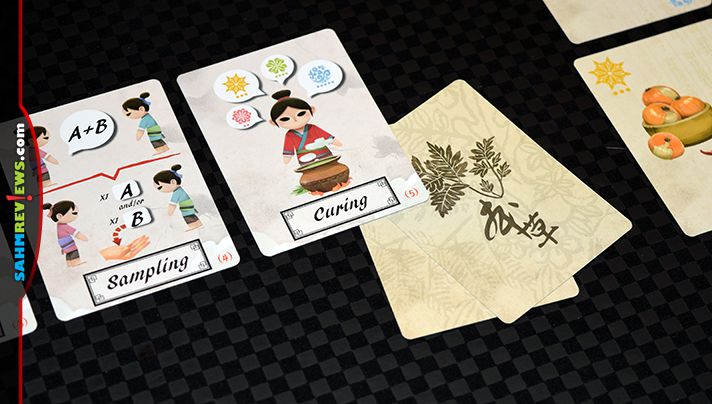 There are fourteen ingredient cards (2 red, 3 yellow, 4 green and 5 blue) which are shuffled together and two are randomly removed and placed underneath the Curing action card face-down. The rest are dealt out to all the players to form their starting hand. A game of Herbalism is ready to be played! 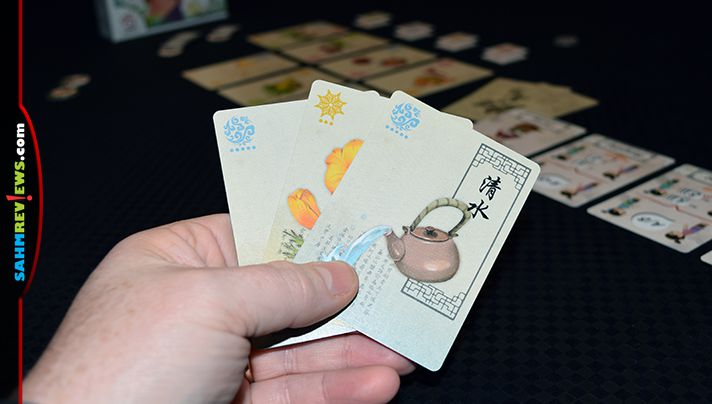 Starting with a random player and continuing clockwise, each person will take their turn by performing three steps in order. First, you’ll move your Pharmacist Marker onto one of the Medicine cards. You may not leave your marker in the same spot as your last turn, so each turn you must move your marker to a different Medicine Card. 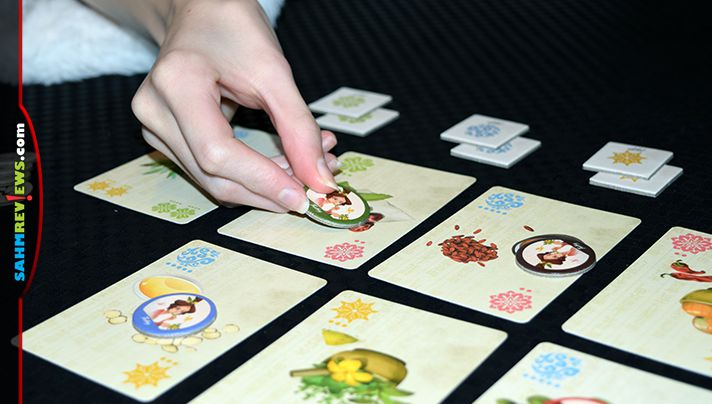 Next, you’ll decide what action you wish to take this turn and place the Action Marker on the corresponding Action Card. Of the five cards, there are four basic actions you’ll take on most turns. You can “Inquire” by choosing an ingredient card from your hand that matches one of the two colors represented on the Medicine Card you put your marker on. Give this card to any opponent and they must look at the card and add it to their hand. Then they must publicly announce how many of the other color card (from the Medicine Card) they have in their possession. Only you and them will know which color they’re referring to, but their answer may also give clues to the other players. 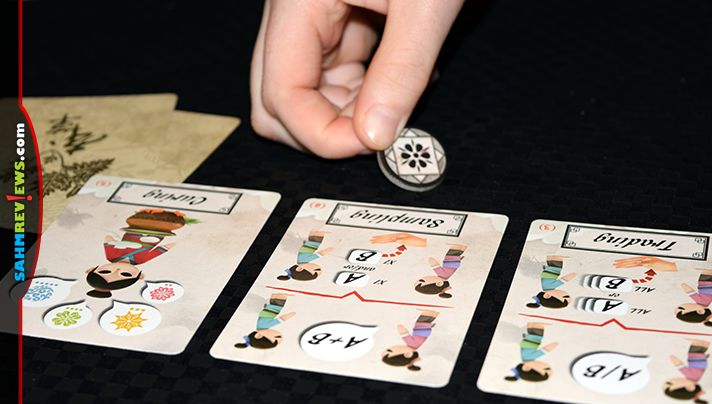 Another action is entitled “Tasting” and acts similarly to the “Inquire” action. You still give up one of your matching color Ingredient Cards to any opponent, but instead of announcing the opposite color, they must secretly give you all of the cards they have of the opposite color. If you choose the “Trade” action, pick a player and they must give you all of the cards they have in their hand that match one of the two colors on your Medicine Card. Lastly, “Sampling” simply requires an opponent to give you two cards from their hand – one that matches each of the colors on your Medicine Card. If they only have one color, then they give up only one card. And if they don’t have either color, you won’t be receiving any! 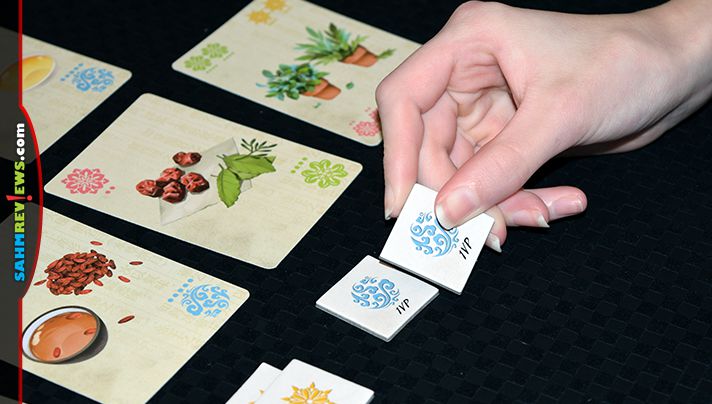 After taking one of these four actions, you have the opportunity to make a prediction about the final recipe’s ingredients. This is optional, but if you’re certain, take one of the Prediction Tokens matching the color of an ingredient you believe is represented on the face-down cards. You may possess as many of these tokens as you wish, but no more than one of each color. As you might have guessed, these are worth bonus points at the end of the game if correct, and penalize you if you guessed wrong. 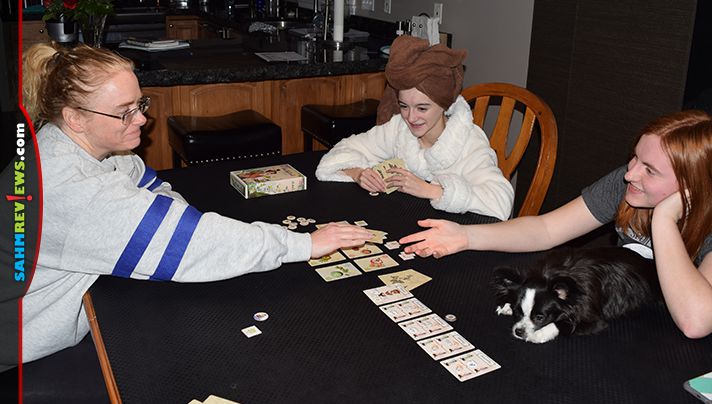 The fifth action you might choose ends the game for you. By choosing the “Curing” action, you are making a guess as to what the two face-down cards are. You’ll place your Cure Marker, answer side up, on any of the Medicine Cards (the one you think matches the Ingredient Cards) and then all other players in clockwise order can do the same. If there is another player’s Cure Marker already on a card, then that player will flip theirs over to the “follow” side. If not, they may place theirs with the answer side up on this new choice. If you are unsure, you do not have to place your marker, but if at least one of the answering/following players had correctly identified the ingredients, the game ends immediately without you getting to make a selection.

Starting with the active player and going clockwise, each person who placed their marker will peek at the two Ingredient Cards to see if they match the Medicine Card they chose. If they do not match anyone’s, the game continues with those players not taking any additional turns (although they can still be part of another player’s actions). If they do match, the game ends and scoring commences.

The player who correctly determined the ingredients with their answer side up receives three points. Anyone who followed on the same card receives one point. If someone’s answer side is on another card, there is no penalty. However, if you followed on the wrong card, you will lose a point from your total. If you have Prediction Markers that are correct, those are worth one point each and penalize a point if you have incorrect ones. Herbalism is played over a few short rounds like this until someone accumulates at least seven points. Whoever has the most overall points at the end of that round is the winner of Herbalism!

With the entire game lasting under 30 minutes, Herbalism is the perfect filler game that still requires good deductive reasoning. You can find it on Amazon, at your favorite local game store or direct from Deep Water Games when you see them at conventions. They have a couple of other titles with similar art styles and matching boxes that would look great on your shelf as well as on your game table. Be sure you’re following them on Twitter or Facebook in case they decide to offer new ones!

What is your favorite herb to use in a recipe?