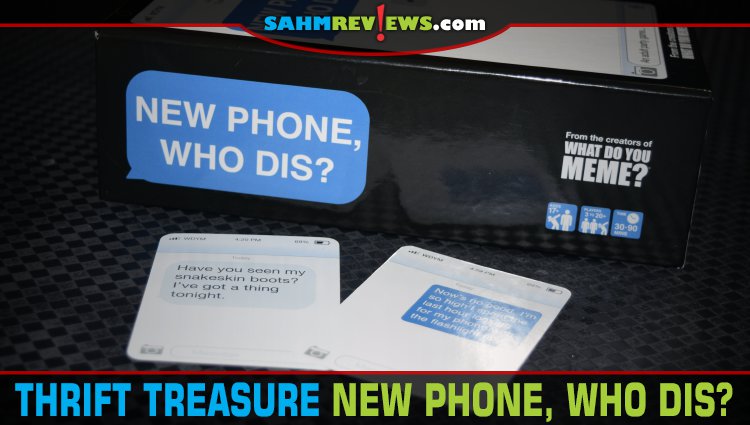 If I really think about it, there are three classifications of games today. First, there’s the classic fare like Monopoly, Life and Sorry. These are the tried-and-true favorites that have stood the test of time for decades. Then there’s what we lovingly refer to as “hobby games”. These more strategic and in-depth examples like Steamwatchers, Destinies and Tutankhamen are also referred to as “modern games”.

There’s another category that tries to bridge the gap by appealing to party-goers while not resorting to the familiarity of rolling dice or trying to take tricks. These you’ll find on the shelves of Target and Barnes and Noble, as well at your favorite local game store. They’re a recent phenomenon, and it was no doubt that if we waited, we would start seeing them show up at thrift. This week our patience paid off with this inexpensive copy of New Phone, Who Dis?

Like nearly every other game this one competes with, New Phone, Who Dis? is a rules-light card game that relies on submitting the cleverest or funniest card in response to a challenge by the active player. That person also acts as a judge who picks their favorite answer and awards that person a point.

New Phone, Who Dis? is made up of a heavy box of 240 Inbox Cards and 300 Reply cards, along with an instruction pamphlet. There are two separate ways to play a game – classic and DIY mode. Classic is the version most will recognize. Begin the game by dealing out seven Reply cards to each person. At the beginning of each round the judge will draw an Inbox card from the top of the deck and read it aloud.

These fake text messages are presented as if from someone who is already familiar with the receiver. The twist is all the other players are random people with a new phone who have no idea who the sender is. Some of the interesting topics are phrased as “Bro, what was the type of cheese you had at lunch?”, “Help, my erection is going on five hours!” or even “Can you believe it’s been a year since our business went bankrupt?”.

The replies which are submitted by all other players are “playing along” with the original text and egging on the sender. “Wouldn’t be the first time, amiright??? YEET”, “Wish you were here so you could whisper that in my ear.” and “Alexa, end this conversation for me.” are but a few of the witty comebacks. After all players have submitted their replies, the judge chooses their favorite and awards them a point by giving them back their card. Play until everyone gets bored, then the person with the most points wins.

The DIY version is scored in the same manner, but instead of working from a hand of answers, each person is dealt four Inbox cards and four Reply cards. Players select the funniest-to-them pairing and submit them both to the judge. As before, the judge then selects their favorite and awards them with one card to keep score.

Because this was just published in 2019, it doesn’t show up at thrift too often. Fortunately, it is attractively priced new on Amazon or at your favorite local game store. If you enjoy games like Cards Against Humanity, consider New Phone, Who Dis? a lighter, tamer version. Still, there are enough cards in the box that are too adult for those under seventeen. We’ll keep an eye out for the family version.

Do you enjoy this type of social card game?