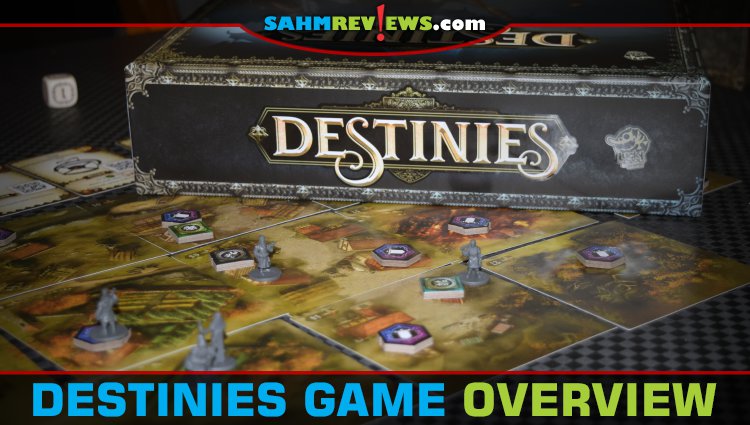 If you’ve ever wanted to play a game of Dungeons & Dragons, you likely fall into one of two categories. You either already have the resources and knowledge to play or you don’t. For those that haven’t played, getting started can be overwhelming. You really need someone who knows the ropes to script it and get you up and running. There are other options that tap into the experience in other ways including games like Gloomhaven which we play frequently with some of our closest gamer friends. Most games in this genre tend to be cooperative where everyone is exploring and working together as a team. Our resident rules-wizard insisted we give Destinies from Lucky Duck Games a go around during a recent game day. What he failed to tell me (on purpose): Destinies is a competitive alternative to this style of game.

While many adventure and dungeon crawler games require a lot of setup and work to get up and running, Destinies does not. To set up the game, you first decide on one of the many scenarios using the companion app. It provides a scenario overview then walks you through the entire setup process!

Each player selects their specific character based on the ones available for the scenario. Players receive a board, 2 main dice, 3 Effort dice, 1 coin and their character’s miniature and card. The character card goes on the designed spot on the player board then the main dice and coin are placed in the active area. Effort dice are set alongside the board. Skill tokens are added to their designated tracks based on the instructions in the app. You’ll also be provided the details for crafting the world.

You’ll venture throughout the map, revealing details as each new title is reached. On each turn, you may interact with NPCs (Non-player characters) and points of interest on your existing space or move to an adjoining space to expand the world, engaging with something in that space instead. Each player has a different objective based on their character so players can stick together and engage with similar things or they can do in different directions entirely. Two objective options are listed secretly on the back of the character card and while there may be some overlap between players, each must accomplish their goals independently.

Every turn, you’ll utilize the app which keeps the game flowing smoothly. It reminds you to refresh one of your Effort dice that may be optionally used during upcoming tests. The screen provides a digital representation of what is on your game table. Move your physical character piece in real life then select the space on the screen. It will walk you through what your choices are including finding treasures, being attacked or having options on what else you can do. Choices have rewards or consequences, but those aren’t dictated by the app. There will be different options that require a skill test (rolling your dice) and different options typically utilize different skills. For example, an attack may employ Dexterity or Power skills while an observation or evaluation of something will likely utilize your character’s Intelligence skill. The markers on your player board indicated your abilities and chances for success and the results of the dice roll will determine how successful you were. As you gain experience in different areas of the world, you will be instructed to increase (or decrease) your skills.

But it isn’t just about your skills. As you travel around, you may earn items that help you in your efforts. Some have ongoing effects while others are one-time use. All cards (character destinies and items) have QR codes that are scanned into the app to help determine the outcome. Items can also be discarded to take advantage of a special card ability instead.

Players continue exploring the world and the points of interest until one player reaches their destiny. The game only supports up to three players and that’s one of the only downfalls of this game. Everything else about it is clean, easy and entertaining. Even if you have a character that wasn’t the best experience, there are plenty of other scenarios to choose from. Lucky Duck Games even has a program where creators can submit their own scenarios. Since the app helps control the game, it’s very approachable by younger players which isn’t true of a lot of games of this type. If you’re ready to play, find a Lucky Duck Games retailer near you, order direct from the publisher or pick up a copy on Amazon. Check out their Linktree to see the multitude of other places to engage with them. In addition to the many games already in their catalog, they have a lot of great games coming out so keep an eye out for those! Enter our giveaway below for a chance to win the copy that Lucky Duck Games has provided for one of our readers!