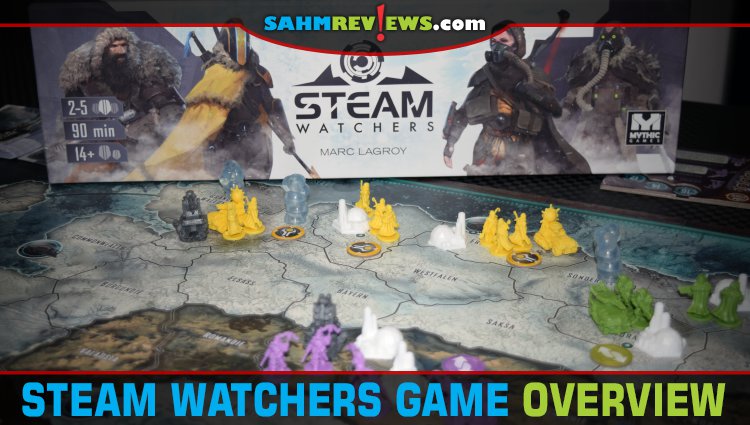 We’ve talked before about the difference between “hobby” games and mainstream. Some people think the difference is that mainstream are available at mass market while hobby requires a trip to your local game store. Product lines are crossing both directions these days so it’s not uncommon to see a game on the shelf at the big box store that looks crazy hard to learn. I’ve said it before and I’ll reiterate here: don’t judge a game by the cover. That includes looking at the back and seeing 3.2 million bits (*slightly exaggerated for effect) and pieces. When Mythic Games asked us if we would be interested in checking out their new Steamwatchers battle game, I wasn’t sure what to expect in terms of difficulty and target audience. That’s all the more reason to want to try it out.

I normally offer details on how to set up the game, but I’m going to veer from the norm here. There are multiple scenarios as well as expansions so it would be overwhelming to go into all that detail. Watch our Steamwatchers unboxing video to see what comes in the box. Just like you, I find a lot of value in reading overviews and hearing what other people think about games. It was interesting to see such a wide variety of opinions of what people thought. My takeaway is that Steamwatchers would be ideal for someone who wants to take a step up from Risk and try something with more objectives and activities than that classic.

The idea behind Steamwatchers is that the land is frozen over and steam vents jetting from the earth are needed for survival as they help thaw the land for crops and offer a source of heat in the frigid lands. Players control clans that work to control the areas with steam columns, but they’re not a permanent option as they also cause sickness. The goal is to either be the first to reach the designated number of resources during the game or have control of the most resources at the end of the final round.

Steamwatchers consists of a main board and a clan board. The map is where the action takes place while the clan boards are used to track personal supplies and contamination levels. There are multiple scenarios to choose from, providing players a variety of options for setup, number of rounds, resources, objectives and rules.

The game takes place over several rounds with each consisting of the same phases: Conclave, Order Planning, Order Activation, Steam Subsides and Whiteout. The Conclave phase involves selection of a title and associated special ability such as drawing cards to spawn steam columns. In the Order Planning and Activation phases, players simultaneously select a token for movement, defense or decoy then take that action based on the order on the Conclave track.

During the Steam Subsides phase, players will remove one level of each column in areas they control. Depending on whether they have units in that area, they’ll also be impacted by the contamination and need to adjust the incubation level on their individual clan boards. So what’s the reason for wanting to control an area that could cause sickness? You aren’t able to build a farm on the land until the column has completely subsided. The final phase, Whiteout, is when players prepare for the next round. It’s also when players adjust their resource levels based on their number of farms and steam column levels.

This is really a scaled down overview of Steamwatchers as there’s a whole lot more built into the phases above. As an example, the token choices are move, defend and decoy, but combat may occur during movement if a player moved into a space occupied by another clan (hence the need for defense actions mentioned above). Defense isn’t simply defending yourself if someone attacks, it refers to building turrets, mobilizing troops and bartering. In addition, if incubation levels reach a certain point, you may need to remove units from the board because they die of contamination. There’s a lot going on when you compare it to the classic game of Risk, but not so much that you’ll spend hours upon hours fighting each other for total world domination. Learn more about Steamwatchers or purchase a copy by visiting Mythic Games’ website. You can also ask your local game store whether they have or can order a copy of Steamwatchers. You can also keep up on the latest news and releases by following their Facebook feed. It’s worth noting that there are an assortment of expansions which can be purchased later to add depth to the game beyond the core bundle.

Do you seek out games that offer a similar but deeper experience from your favorites?