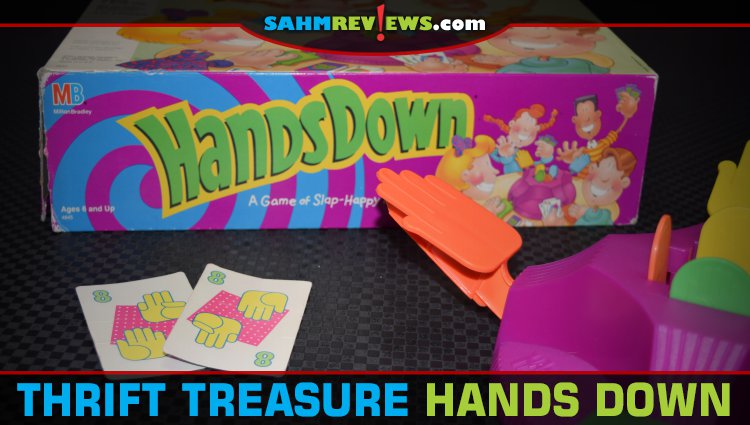 It warms our hearts whenever we find a thrift game which has been well-loved. This means not only is it still in good (or great) condition, but you can also plainly see it was played a lot. The combination of a well-used game along with care to make sure parts weren’t lost makes for a bargain on the used market.

I remember having a copy of Hands Down when I was young but don’t remember how it was played. All I know is you slap the plastic hands when you get the right cards. Beyond that, I can’t recall. Fortunately, this copy was not only complete, it also included the original rules so I could refresh my memory.

Hands Down is part card game, part speed game. The deck of forty-one cards is shuffled (the blank one is set aside and used when you lose a card) and dealt out to up to four players until each has four cards. The rest are set in the middle of the play area as a draw deck. The large 4-handed Slam-o-Matic unit is also placed in the center with each player sitting by one of the hands.

The goal of Hands Down is to score points by playing matching pairs of cards from your hand. On your turn you will draw a card from the deck and examine to see if you have any pairs to play. If so, call out “HANDS DOWN!” and slap your plastic hand.

All other players must immediately also slap theirs, with the person doing so last, losing the round. This is determined by the order of the plastic tabs in the middle of the Slam-o-Matic. The active player then plays their pair in front of them and takes one card at random from the losing person. Their turn continues until they elect to pass.

You must pass if you have only one card in your hand or have no pairs unless you want to try to fake a “HANDS DOWN!”. At any time during your turn, you may fake a Hands Down by pretending you’re going to slap your plastic hand, but don’t, without touching it at all. Any players who fall for your trick lose one card at random to you. If you accidentally do touch it during your fake, your turn ends immediately.

Eventually the draw pile will run out and you would then draw one card at random from any other player. If you have no cards in your hand at the beginning of your turn, you may draw two from the deck (or other player(s) if the deck is empty). There is one Joker in the deck which doesn’t count as wild. It gets passed back and forth during the drawing process and is worth points at the end of the game to whomever possesses it.

When all the card pairs have been played, whoever has the Joker places it face-up beside their card pairs. Each player counts their pairs and receives one point for every set. The Joker is worth two points on its own. The player with the most points wins Hands Down! In case of a tie, add up the numerical values of each pair, awarding twenty for the joker. That person is the overall winner!

Hands Down has been offered by several publishers over the years, including Milton Bradley and Ideal. It’s no longer in print but can be found on eBay for reasonable prices. Plastic tends to get brittle over time, so make sure the condition looks good before committing to one.

Do you remember this classic 80’s game?