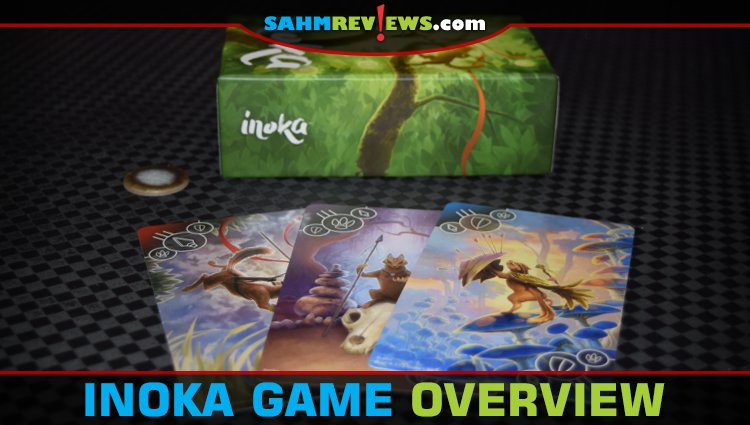 That’s the interesting concept in the newish game, Inoka, by XYZ Game Labs. Rock, Paper, Scissors (or sometimes called Roshambo) is typically for two players only. Inoka allows for up to four to play at the same time, or even eight by combining two sets.

Inside the small, beautifully illustrated box are thirty-six tarot-sized Tactic cards, nine Sacred Stone tokens and an oversized Leaf Totem token. Setting up for a game of Inoka takes just a few seconds with the Sacred Stones and Leaf Token being placed in the center of the play area. Each player receives one matching set of nine Tactic Cards. Everyone chooses five cards to use during the round and places the remaining in a discard pile, face-down.

For a mini round, called a “Clash”, the players select one card from their hand and place it face-down in front of them. Once everyone is ready, the cards are revealed simultaneously. In a two-player game, resolving the outcome is as simple as in Rock, Paper, Scissors. In Inoka, Attack beats Taunt, Taunt beats Block, and Block beats Attack. The types are represented by symbols on the cards along with one, two, or three ticks (small, medium, large).

If both players play the same card type, the tick marks are used to determine the winner (highest wins). If the exact same card was submitted by both players, the round is considered a tie, and nothing happens. Otherwise, the winning player takes the Leaf Totem. If a player wins a Clash with an Attack card, while possessing the Leaf Totem, they win the round immediately and take one Sacred Stone. If this doesn’t occur, players continue to Clash until both have played all five of their cards and the person who has the Leaf Totem at the end wins the Sacred Stone.

For a multi-player game, there are two rulesets you can choose from. Free-for-All has you compare your card to all other players. The person who wins against the most players takes the Leaf Totem and puts their card back into their hand. All other players discard theirs.

The other variation is called “Challenge” and has the active player clash with the person on their left using the 2-player rules. In both examples, the person with the Leaf Totem at the end of the round takes a Sacred Stone. And in all games, regardless of how many are playing, the first person to collect three Sacred Stones is the overall winner!

For its low price and easily transportable size, Inoka is a neat variation on the classic kid’s game. There is some strategy needed during the card selection process along with deciding which card to play and when. The upgraded Kickstarter version is available on Amazon, as well as at your favorite local game store. Remember, pick up two if you want to support up to eight players!

XYZ Game Labs has a lot in the works, including a new game available for pre-order featuring BIGFOOT, the most well-known monster truck, and the coolest dice we’ve ever seen (they’re actual tires!). Verify you’re following them on Facebook and Twitter to find out more about the release and the rest of their lineup!

Do you enjoy more advanced versions of classic games?