You’ve heard the adage that there are always at least two sides to every story. I’m always sad when I see people jump to conclusions without having all the facts in hand. Politics has always been a divisive concept and people fail to research or learn about the other viewpoints. This concept isn’t an isolated political issue. It’s widespread in everyday life. Kids learn this at an early age when they tell their parents they don’t want to eat certain foods. Even if done with the best intentions, making a statement without all of the information in hand isn’t helpful, useful nor correct. Over the past several months, we’ve read and heard countless articles, reviews and comments about people on whether Hues and Cues is colorblind friendly. The people who say it isn’t aren’t colorblind. They are making an assumption because it involves color. While trying to be helpful, they’ve actually made invalid and incorrect statements. It’s sad. This idea came full circle when we tried to play Mental Blocks from Pandasaurus Games. You need to learn about other viewpoints before you know you have the right answer! 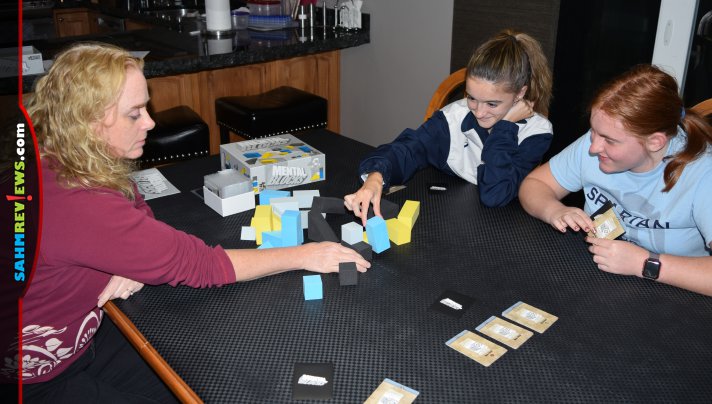 The most difficult part of the setup for Mental Blocks is making sure you don’t see the cards your teammates would be using. So instead of me typing “be careful not to look at the card” after ever step, I’m just going to say it this once. The reason this is so important is because the game is about solving a puzzle based on each person having limited information. The game consists of 24 foam blocks, 30 sets of 9 perspective cards, 9 restriction cards, 5 major glitch cards and 4 minor glitch cards. Each time you play, you’ll utilize one of the 30 sets of perspective cards along with restriction and glitch cards based on the difficulty level you’re attempting. But for each game, you have to actually select one of the sets and distribute them… without looking at them. Yeah, I know I said I wouldn’t repeat it, but couldn’t resist. It’s kind of an important detail. 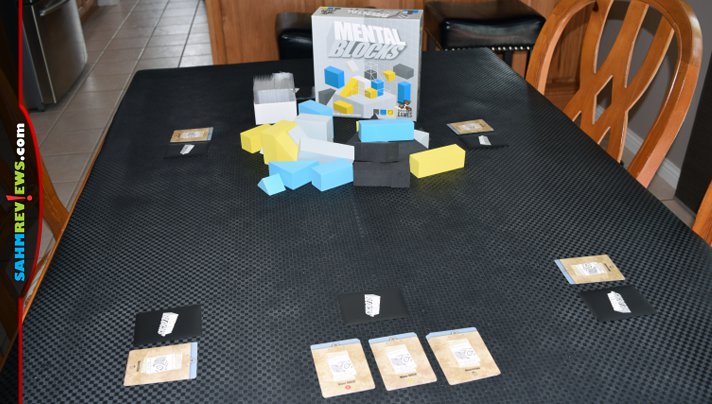 Choose which puzzle you want to play then grab all the cards with that number on them. The green side of the card reflects the Family campaign while the opposite (red) side is referred to as the Challenge campaign. Create a deck based on the number of players, utilizing the cards with the check mark first. Additional cards are out of the game. Place each in a sleeve with the selected challenge face down. Give one to each player to secretly use for their role. Decide on the difficulty level and add restriction and glitch cards accordingly. Set the blocks within reach of all players and you’re pretty much ready. 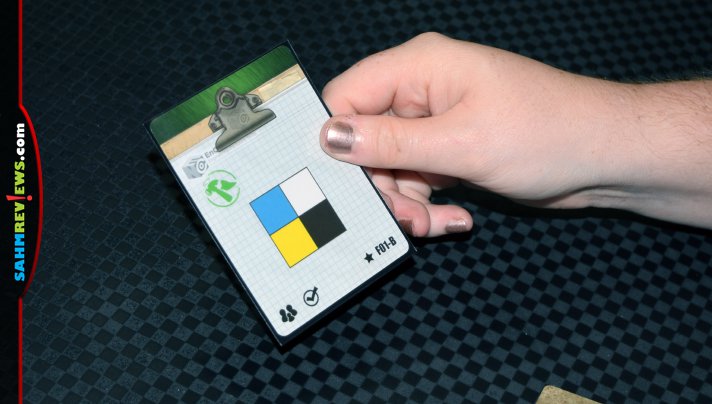 The Perspective cards show exactly that: your perspective for the puzzle in the center of the table. It’s your job to work together with the other players to figure out which blocks make up that puzzle. While you cannot show your cards to other players, you can discuss them. There are actually two different types of perspectives: 2-dimensional but full color and three-dimensional black and white. Which cards you use depends on how many people are playing. The cards with the checkmarks in the bottom left indicate which are the priority. 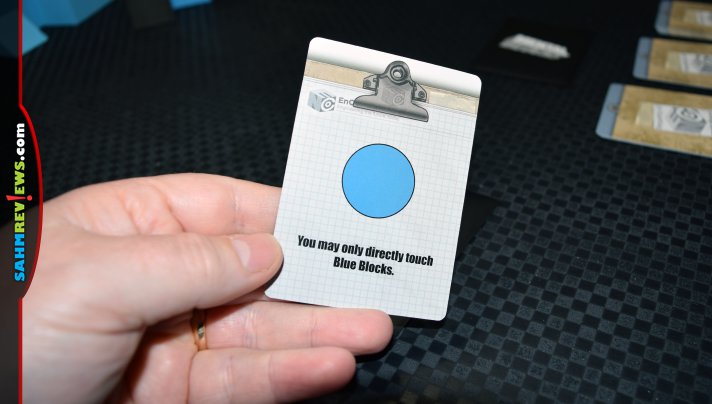 It’s not as simple as that though. Restrictions cards are also part of the initial setup. These cards limit what a player can do such as only being able to touch a certain color or shape. You may know exactly how you want to build your viewpoint, but if you can’t pick up a particular block then you’re at the mercy of your teammates. Just like in a game of Team3, communication is so important to being able to solve the puzzle in Mental Blocks. 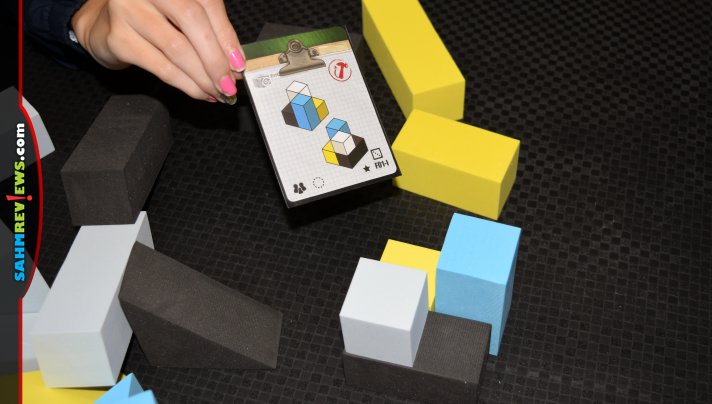 At any time during the game, players can select pieces and move them in order to get them to align with the various perspective cards. It’s important to recognize that your perspective is figurative, not literal. In other words, you may have to get your butt out of the chair and move to another side of the table to confirm your card matches the model everyone has been working on. Once everyone agrees that they have the right configuration, then you call for a vote. Building stops and everyone who thinks the puzzle is solved raises their hand. Players win if they solve it and lose if they did not. Oh. Did I mention that there’s a timer running this entire time? The amount of time you have ranges from 7 to 10 minutes, contingent on the player count. 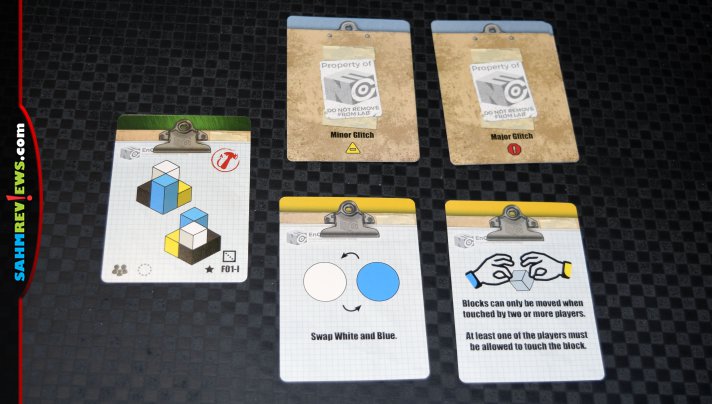 If you want to switch things up a bit, you can incorporate a hidden traitor who is able to lie about anything as long as they don’t get caught. The traitor card is actually part of the base set of cards for each set. In games with a traitor, it’s randomly distributed. For times you’re playing cooperatively, it’s set aside and used as an answer key.  Adding a traitor to the group can certainly ramp up the difficulty level, especially since you’re working against the timer. Whether playing with the traitor or in a cooperative mode, you can still add layers of difficulty. This is done by by incorporating minor glitches or even a major glitch. When you have a minor glitch in play, the table may be instructed to swap the colors of the blocks. Major glitches apply to the entire table as well, but prevent you from talking or moving around the table to see the blocks from another angle.

Because this game incorporates so many different options for playing (cooperative, hidden role, various levels of complexity), it is definitely something that puzzle fanatics should try out. Copies of Mental Blocks are available on Amazon and direct from Pandasaurus Games, but as always we encourage you to shop local so check with the game stores in your community. If you are interested in unscrambling another puzzle, visit Pandasaurus Games on Facebook and Twitter and see if you can figure out what new titles they have coming out! And don’t forget that Mental Blocks offers an incredible life lesson… always consider the other viewpoints before making comments, statements or judgements!

Do you take time to consider how other people view things before making decisions?