What do you do when you’re invited to join a game that is made up of a bunch of things you hate? You give it the benefit of the doubt and play. Potemkin Empire from Indie Boards & Cards is a city-building game (that part I like) that incorporates bluffing and deception, attacking other players and history. Those last couple things aren’t good sticking points for me since I have no poker face, don’t like when people are mean to each other and, well, history is generally pretty boring. This game was fighting an uphill battle from the beginning. But as I explained in my Mental Blocks game overview, I am a firm believer in giving things a shot instead of jumping to conclusions. I learned that a “Potemkin Village” is based on stories of a Russian military leader who created fake, portable cities to impress Empress Catherine the Great along her 1787 road trip to Crimea. Upon reading more about it, I said to myself, “History really has some interesting stories.” So how do they incorporate that into a game? Let’s see! 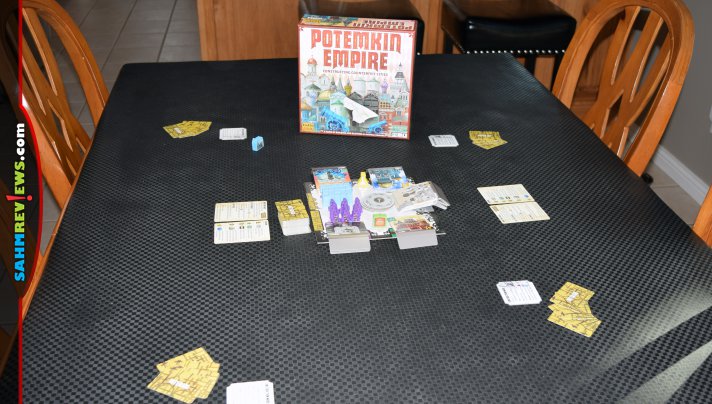 Players take on the roles of small Russian village mayors along the Dnieper River where the Empress will be passing. You want her to think you have a stable, prosperous village, but she’ll be there soon so you only have enough time to make it LOOK impressive. With a fake store here and a beautiful façade there, you may just be able to pull it off. Points are scored from your buildings, exposing opponents’ fake ones, and producing goods. Despite the many types of cards, there isn’t much to set up. Shuffle the deck of interior cards. Place the board in the center of the table then add the deck of interior cards, façade cards, cubes, tokens and meeples to their designated spots on the board. Give each player a mode card and player aid. 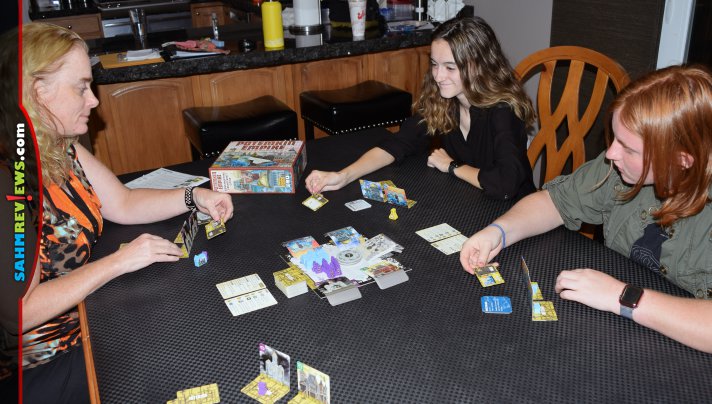 The game takes place over four rounds which are identified by the month token in the center of the board. Within each round, there is a Drafting Phase, an Action Phase and the End Phase. At the end of four months, Empress Catherine the Great will evaluate all the cities to determine the most valuable. The key is to figuring out how to ensure that is yours!

Each round starts with the drafting phase. Players are dealt four Interior cards where they’ll keep one and pass the remainder to the person next to them (direction as indicated on the month token). This process repeats with players taking one from the hand they receive and passing until none are left to pass. There are three different types of Interior cards. Ones that indicate the construction of REAL building, others that are labeled as FAKE and some that are conditionally real. In addition, some of the cards may include an action or ability that may be used in lieu of construction. 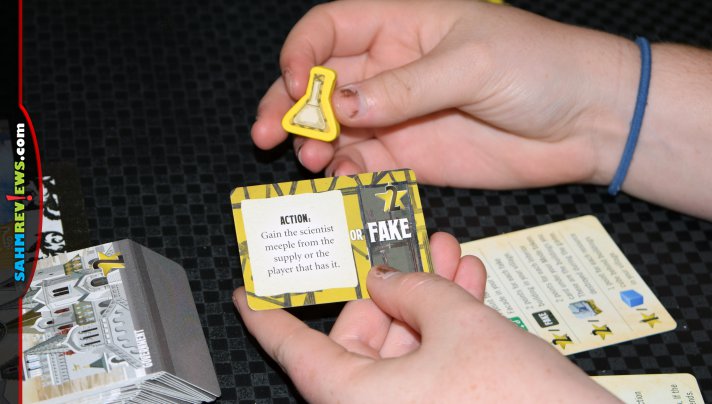 After all the cards have been drafted, it’s time to move on to the action phase. Starting with the player who holds the castle meeple and continuing in the same direction as the draft, everyone takes actions. In the Construction mode, you can construct a building (fake or real), play a card ability, spy with agents that are ready behind an espionage building or have your industrial buildings produce resources. Once you take the production phase, you’re no longer able to construct or spy until the following round. 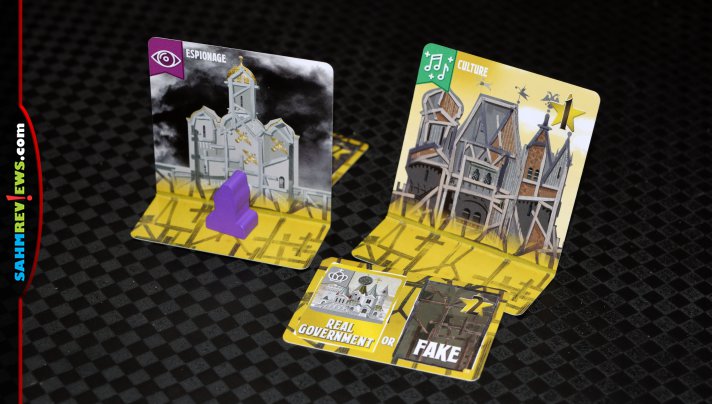 If you opt to construct, you’ll select a building and stand it up in front of you. Each type of building offers a different ability, bonus or unique scoring. The person with the most Culture buildings earns the shield to protect from spies. An espionage building gives you a spy meeple. Government building help you claim the capitol meeple and therefor first turn in the following round. Industry produces resources which earn points at the end of the game. The mayor with the most science buildings claims the scientist meeple and is able to draw an additional Interior card at the start of the next turn. Then you’ll place an Interior card face down behind it. Only you will know if it’s real or fake. At least for now, that is. Spies and action cards give the other mayors a chance to discover your fake buildings and destroy them. 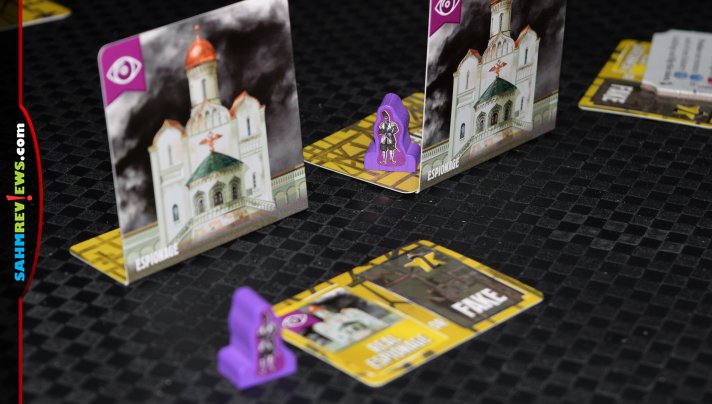 If you have spies that are ready, an action option for your turn would be to deploy available spies. If you believe someone has built a fake building then you send your spy in. You look at the card on the interior and if it’s real, the card is placed in front of the building as proof. If it is fake, the building is destroyed and any contents (tokens, productions goods, etc.) are returned to the supply. You get to keep the interior card as proof of your accomplishment. Place it underneath your mode card and you’ll earn two points during the end of game scoring process. 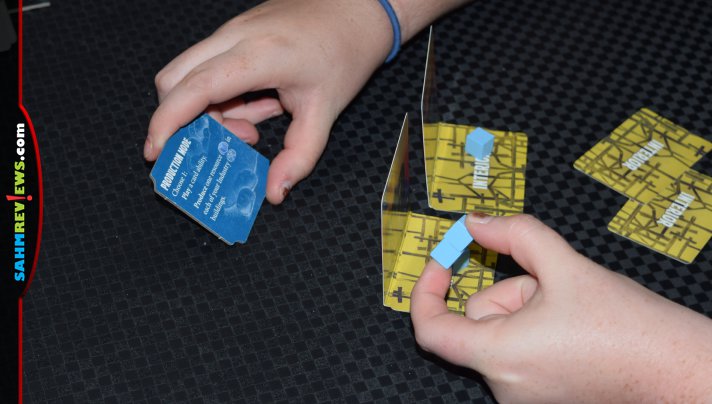 If you have constructed industry buildings, you can flip your mode token to the production side and earn a resource for each building. The cube is placed behind each building that generated it and you’ll take this action each turn for the remainder of the round. A round continues until there is only one person left in Construction Mode then the Action phase ends immediately. Players discard any remaining Interior cards in their hands, reset their mode token to the construction side, ready their spies by placing them behind their respective espionage building and return the month token to the box. After the fourth month (round), Catherine the Great arrives and points are tallied.

While Potemkin is technically a city-building game like Neom, it also includes a lot of deception like in Sheriff of Nottingham. You can play an honest game if that’s your preference, but you’ll certainly be rewarded if you sneak a fib in here and there. Pick up a copy of Potemkin Empire on Amazon or ask your local game store if they can order it for you. Check out Indie Boards & Cards on Facebook and Twitter for their latest buzz about games.

Were you familiar with the story of Grigory Potemkin and Catherine the Great?