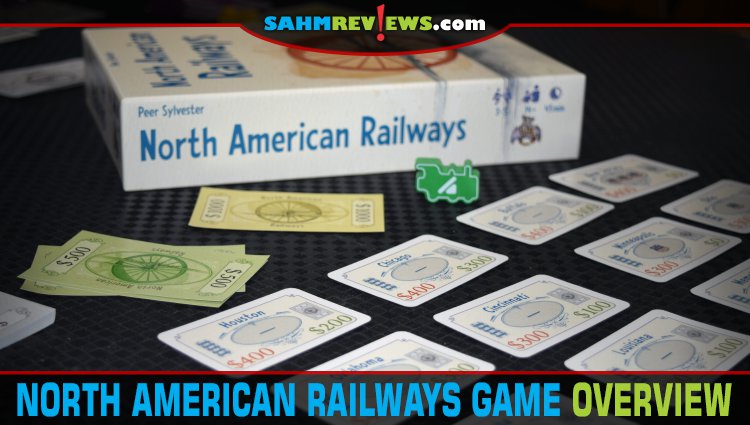 If you’ve ever played any of the scores of 18XX games on the market, you know it’s a multi-hour experience. Combining track laying with stock manipulation, these games are among the heaviest the hobby has to offer. They have a huge fan base, spawning clubs which attend conventions together and Facebook groups with heated discussions. We enjoy playing them too, but don’t always have six hours to spare to do so.

Many game publishers have tried to shorten the play time with simpler rules. Last Spike kept the tracks and simplified the ownership aspect by requiring players to acquire land instead of company shares. Railroad Rivals kept both features but streamlined the rules, eliminating the board in favor of tiles which represented the cities. We recently discovered North American Railways by Flying Lemur Games and found that they took a unique approach – they eliminated the tracks altogether! 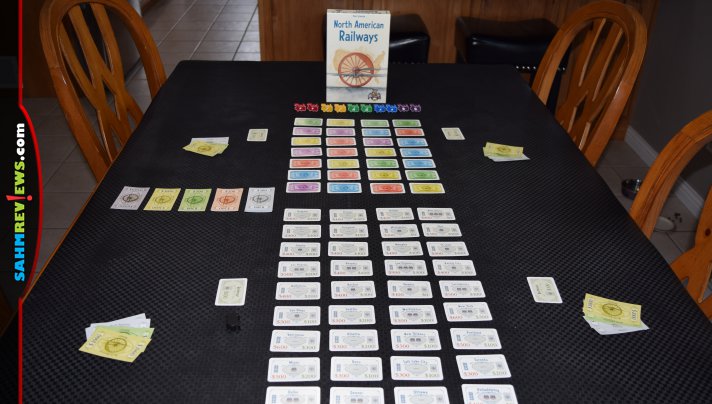 In fact, North American Railways could probably be used as a teaching tool about the ins and outs of the stock market or business ownership. The aim of the game is to earn the most profit by trading shares and expanding the networks of five railway companies. 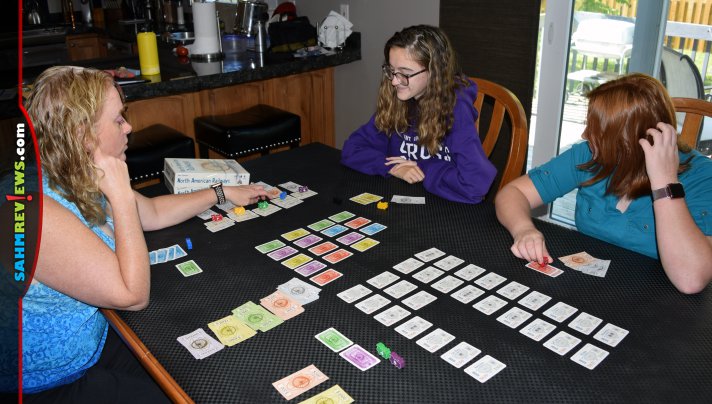 Inside the box are mini cards for the cities and company shares, train-shaped tokens for each of the five companies and a stack of play money. The 30 Share cards are shuffled, the top two removed and put back into the box and the rest are dealt out into a 4 x 7 grid. The 36 City cards are also shuffled and placed into a 4 x 9 grid next to the Share cards. Within reach of all players are the ten Train tokens, which are sorted by color. Money is given to each player to begin the game and varies according to the number of participants. 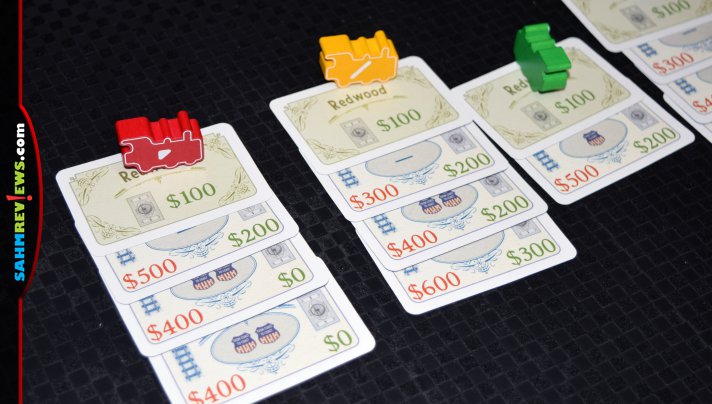 North American Railways is played over rounds, which are broken up into phases. Beginning with the starting player, everyone chooses one of the company shares at the bottom of one of the four columns to purchase. If they are the first to buy a share of that company, you may pay any price you wish. This money is put under the train token matching the company color and represents the company’s treasury. The second token from that company is taken by the player who becomes its director. 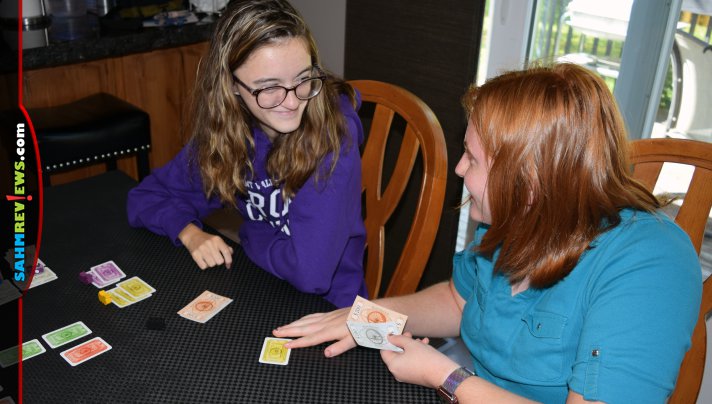 If purchasing a share of a company you are the director of, it will cost you $1000. Only half goes to the company treasury and the other half to the bank. If another player is the director, you may offer any price. They may choose to accept it or buy the share themselves for the offered price. Again, half of the proceeds go into the treasury and the rest to the bank. If a player ends up with more shares owned than the current director, they become the new boss and take the director Train token! 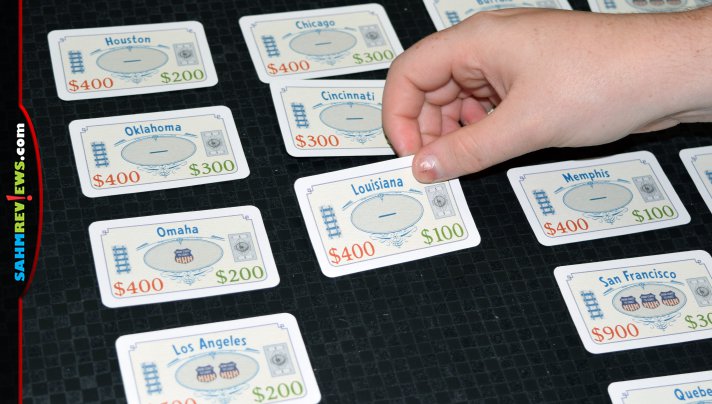 During the next phase of North American Railways, all players will now help their companies expand by purchasing routes through cities using the companies’ treasury. In turn order, players will choose a company in which they own shares and select a city from the bottom of the four columns of City cards. The cost is printed in red and must be paid for out of the treasury. Each player may only purchase for one company, even if they have more than one share. When all players cannot, nor wish to, purchase any cities, the phase ends. 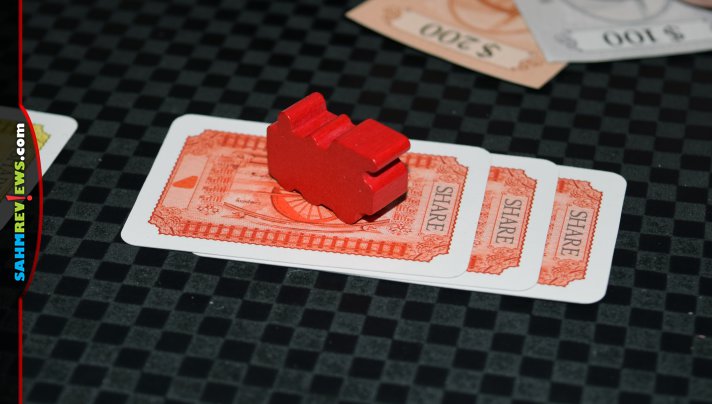 Lastly, everyone receives income from the companies they own. Income is printed in green on the City cards, including the five starting cities. The sum of the numbers is evenly divided by the outstanding shares with an extra $100 given to the director from any leftovers. The rest returns to the bank, presumably as taxes or transaction fees. The next player in clockwise order becomes the new starting player and another round is played in the exact same manner. 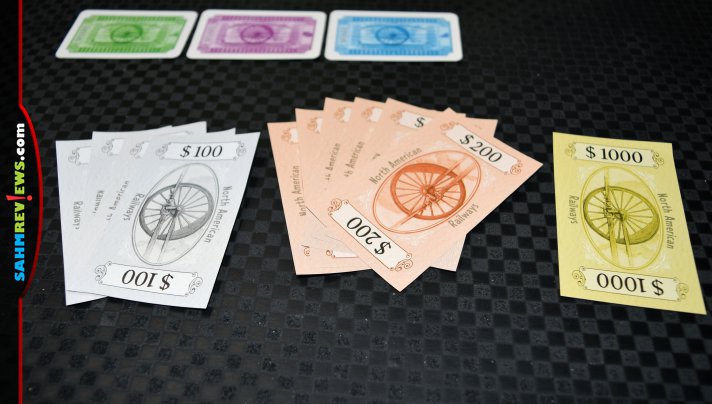 A game of North American Railways ends when there are fewer shares remaining than players in the game, when there are five or less cities available to be purchased or if a City phase results in no one purchasing anything for the entire round. One last income phase is performed, with the company directors receiving no pay. A final bonus of $100 per coast-to-coast symbol is paid to owners of that company for each share. The player with the most money after this final payout is the overall winner!

This U.S. version of North American Railways is an import and translation of the same game by Spielworxx of Germany. You can find copies at your favorite local game store or direct from Flying Lemur on their website. Follow them on Facebook or Twitter to find out what their next project will be!

What is your current favorite train-themed game?