In the past couple of summers, a friend and I have driven for a little over two hours to meet some other friends from St. Louis at a hotel for the weekend. No, it wasn’t one of those trips (get your minds out of the gutter). It’s just a group of people getting together to enjoy playing board games that don’t get much play at our respective game nights.

This past summer during our trip we played only one game on Saturday. That may not sound like much of a reason to travel so far just to play a board game, but this game took a little over six hours to complete! Its length is the main reason it gets to the table so rarely, but the genre, trains and train companies, is one of the most popular. Over the years there have been scores of versions of what hobbyists refer to as 18XX or tycoon games. These are games about the early days of railroads and the companies, big and small, that laid track and helped foster the industrial revolution.

These are games that are much more than creating routes and fulfilling contracts as in Ticket to Ride (although that’s still a favorite here too). Not only are you laying track and establishing hubs, you are actively buying and selling stocks (ownership) in each railroad. The ultimate goal being to have the most money at the end of the game. 18XX games are some of the most challenging around – it’s just too bad they take so long to play!

As of late we’ve been on a search for train-themed games that we can play with the family that won’t be an all-day commitment. Last March we tried out Train Heist, and while it was fun, it just didn’t hold our attention for too long. January’s feature about Trainmaker showed how dice could play a role while you built trains and made deliveries, and it is still in our game night back since it plays so quickly. Up until now the closest thing we’ve found to a game that successfully mixes strategy with a train theme while keeping the play time under a couple hours is The Last Spike. In that one you are building routes between established cities and collecting money if you own land deeds in one or both.

We recently had the opportunity to try out another brand new train-themed game, Railroad Rivals by Forbidden Games. It looked to have everything we loved about the 18XX series – building routes, establishing route ownerships and an always-moving stock market! It also supported up to five players and promised the complete experience would take less than an hour! 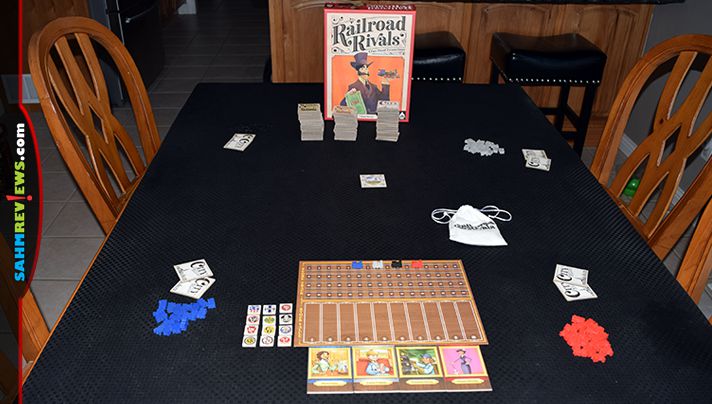 Instead of using a traditional board, Railroad Rivals chooses to use tiles to represent each city. At the beginning of a game, all players receive two random City Tiles which are placed face down so other players cannot see them. Either the Chicago, St. Louis or Cincinnati tile is placed in the middle of the table (also randomly selected) and Goods Cubes equal to the number shown on the tile are placed upon it. Everyone also chooses a color and takes the Character Card and all of the wooden locomotives in that color. The Character Cards are then shuffled together and dealt out in a row to determine player order. 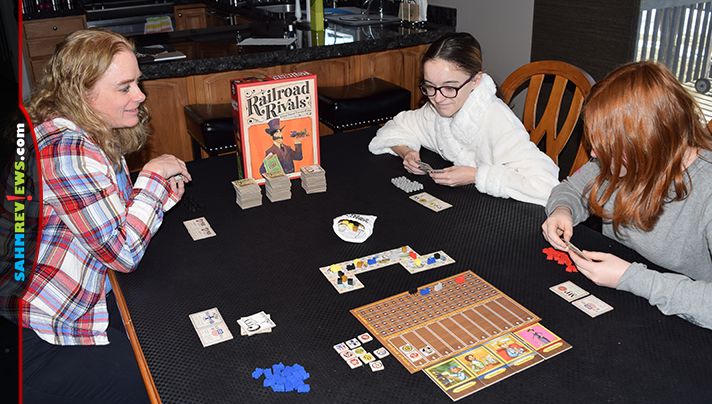 Each round in Railroad Rivals is divided up into four phases. First, City and Stock tiles are drawn equal to the number of players and turned face up near the middle of the table forming a bid row. For the first round, players will move on to phase two and begin drafting one of each tile type in turn order. On subsequent rounds, players must bid for first choice during an auction where you must bid with victory points. The player who bids the most (all others have passed) gets to choose first, but loses those points on the score track. Their character card is moved to the front (left) of the row and all others slide to the right, maintaining their previous order. 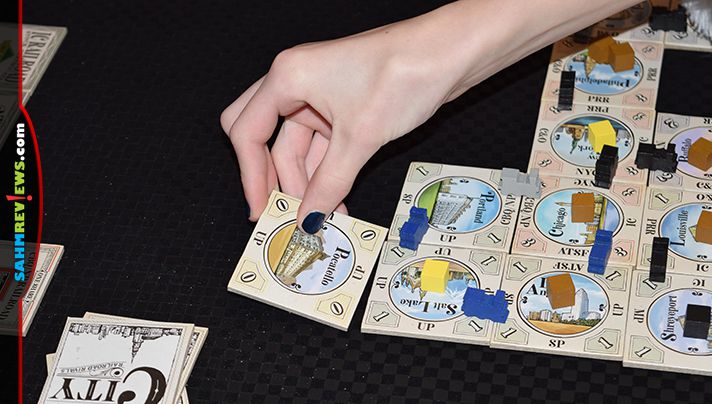 Once all tiles have been drafted, each player will take a turn placing one of their City Tiles to the center of the table next to another City Tile. The two touching edges of the tiles (the new tile and the one already on the table) must have matching railroad logos to be laid next to each other. When you successfully place a tile, you have created a link and place one of your wooden locomotives onto the tiles, signifying who owns the route. 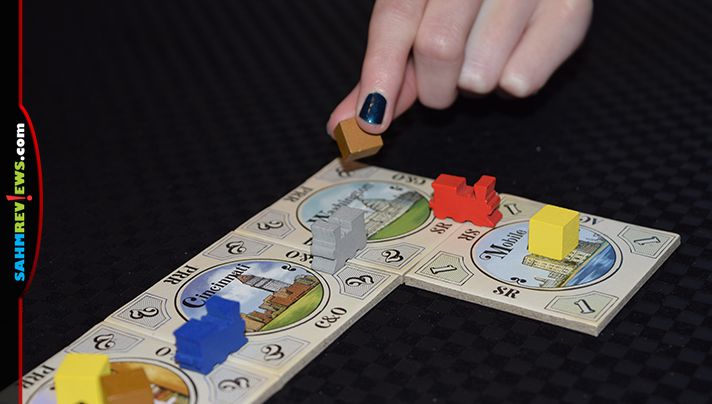 After everyone has placed one of their City Tiles, each person delivers goods, also in turn order. Choose any Goods Cube and deliver it via any existing link on that City Tile. That cube is removed from the board and will score you from one to three points (highest if you’re the first to deliver that type of good this round, less if one or more people beat you to it). Additionally, if the link used to transport the goods was not owned by the person making the delivery, the link’s owner also receives two points. Whichever railroad was used to make the delivery has its price on the Stock Value Board moved up one point. 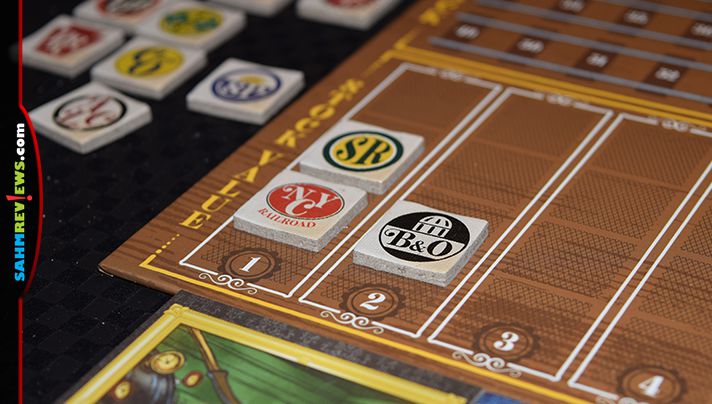 Additional rounds are played in the exact same manner until the City Tile draw pile runs out. At that point, only Stock Tiles will be dealt out at the beginning of each round. The last turn is triggered when any player places their last City Tile onto the table. When that round is complete, each player scores points for each Stock Tile they own based upon the railroad’s current price on the Stock Value track. The person with the highest overall total wins Railroad Rivals! 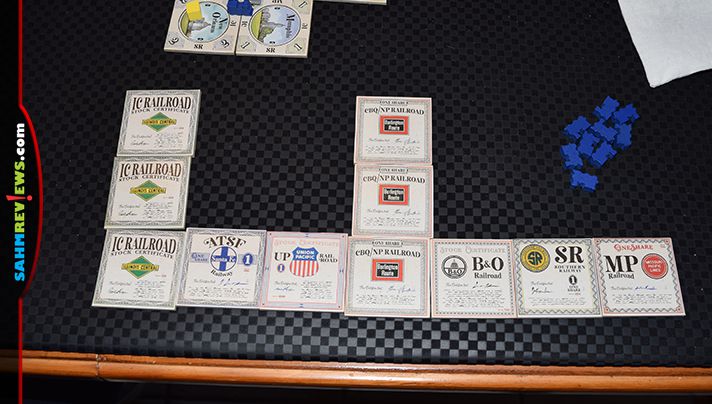 Just like in a good 18XX game, predicting the future value of a railroad’s stock along with careful selection of which goods to deliver are what you’ll need to do to be successful in Railroad Rivals. I think we’ve finally found that happy medium between the 18XX series and other quick train-themed games. If you’ve been looking for a railroad game that plays in under an hour, yet is just as challenging as their longer cousins, there are a couple ways you can get your copy! 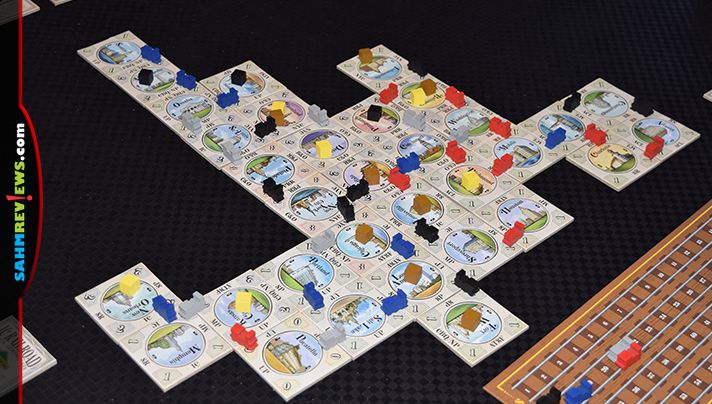 First, ask as your favorite local game store. If you cannot find one there, you’ll certainly find copies available on Amazon. But if you hurry, you can catch a brand new copy of the regular or premium edition of Railroad Rivals AND its brand new Robber Baron expansion on Kickstarter! It’s only active for a few more days, so don’t put it off until later! Judging by the current price on Amazon, this Kickstarter is probably the cheapest way to obtain it!

As always, be sure to check out Forbidden Games’ website, where you’ll find out more about Railroad Rivals and other games in their lineup. If you don’t want to miss out on their next Kickstarter, make sure you’re also following them on Facebook and Twitter!

What is your favorite train-themed game?