Our family has a lot of friends that are into trains. I went to college with a guy who went out on the weekends to photograph engines as they passed through our rural college town. My daughter has a best friend that knows everything there is about the history of trains and runs his own YouTube channel about the processes he’s going through trying to build his own layout.

Then there’s the local friends who are into board games about trains. I’ve played more 18XX games in the past two years than anyone should in their lifetime. For the uninformed, these are games with a historic railroading theme and have a financial mechanic to go along with its rail-building aspect. Most sessions are 3+ hours long, with many lasting much (MUCH) longer.

And of course we’re all familiar with Ticket to Ride and Colt Express, two of the more popular train-themed games on the market. Well, we found a third title that warrants inclusion in your collection of railroad games – Train Heist by Cryptozoic Entertainment. And much like Colt Express, you get to play as a train robber instead of an engineer and everyone is working together on the same goal since Train Heist is cooperative! 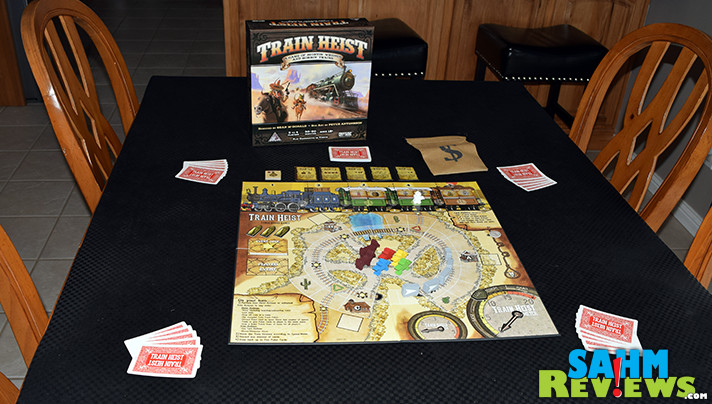 Train Heist is unique for us in that it has one board, but that board is actually made up of two different play areas. One for when you are walking (or riding) through the canyons and one which represents your position on the train itself! Which part of the board your pawn resides depends upon where you want to move and what you wish to accomplish.

The main part of the board is set up with a five-piece train along with a stack of event cards, your cowboy minis in the center of the canyon, railroad switches and even a marker on the hangman’s noose! The train section houses the Sheriff and randomly-placed loot tiles, which are what you and the rest of your posse are trying to steal. In the lower-right of the board are two dials representing the train’s speed and the team’s Train Heist meter. The game comes with magnetic hands that are attracted to tiny metal discs embedded within the board. A super-nice touch that helps keep them from being bumped out of place! Poker cards are then dealt out to each player (a hand of five) and the last person to have ridden a trail becomes the first player. 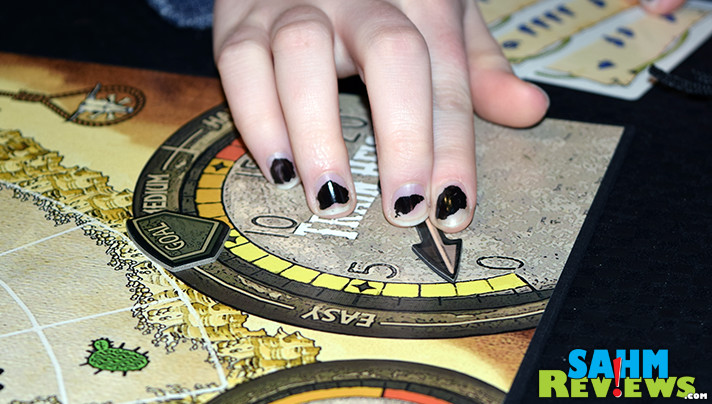 Playing Train Heist is pretty straight-forward. On your turn you take up to four Heist Actions and as many Free Actions as you would like. You are trying to board the train, steal some loot without being seen by the Sheriff, get off the train and take your loot into a nearby town and then repeat until your Train Heist meter reaches the pre-determined goal (usually 10 or 20 pieces of loot).

Heist Actions include moving your cowboy one space on either the main or train map, moving a horse by discarding poker cards equal to the number of spaces you’d like to move, looting the train by discarding matching poker cards as depicted on the loot tiles, dropping off loot at a town and scoring points or even flipping a railroad switch, causing the train to take a different path. And you must do all of these without attracting the attention of the Sheriff! 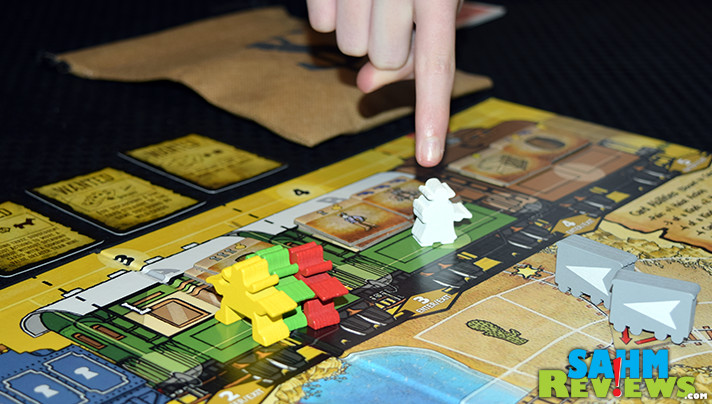 While on the train, if the Sheriff enters the same car you are in, you are caught and are sent to the mobile jail located in the coal car. You lose all of your loot tiles, your poker cards and any bullet tokens in your possession. While in jail you are forced to shovel coal, which increases the train’s speed. You only have one option to get out of jail – draw poker cards and keeping only keyhole or wild cards until you collect a total of three. Upon escape, you immediately put your cowboy in the space to the left of the coal car and continue your turn by drawing five new poker cards and taking any additional heist actions you have left. 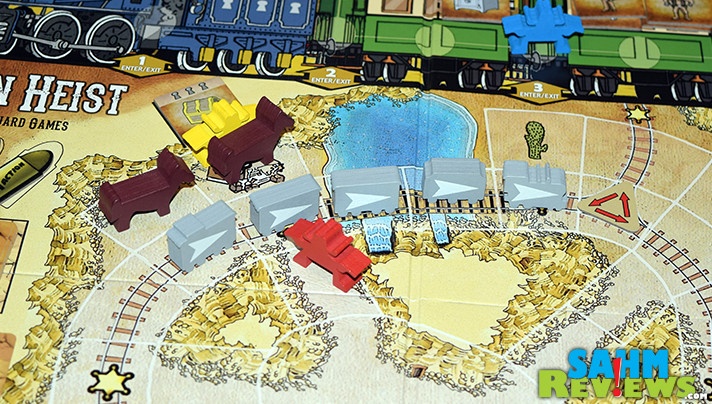 If your looting is successful, you must now get off the train and head to the local town as fast as you can. Once there you may drop off your loot and begin your trek back to the train to collect more. But each time the train crosses one of the stars on the tracks, a new event happens and an event card is drawn. As it passes through towns, the train also picks up additional loot which refills its coffers. But watch out for when the train passes through the tunnel! If you’re caught on the train’s roof…well, you can imagine what happens. You’ll lose a turn and revive back in the center of the main board (your starting spot). 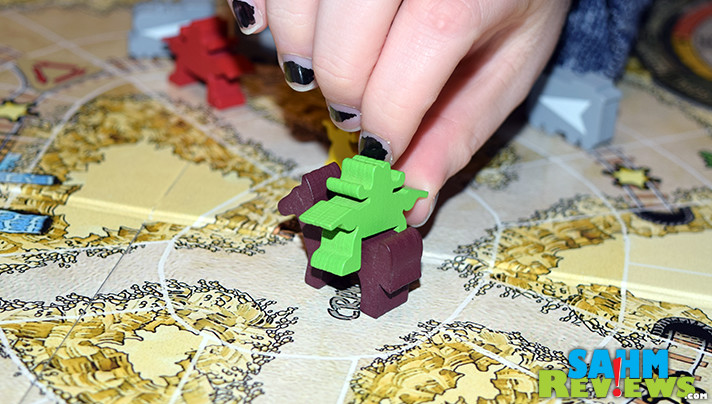 You also have to be careful while returning to town not to get caught on the train tracks. If the train moves and you are in front of it on the tracks…imagination time again while you lose a turn. Keeping watch of the position of the two switches is also important as you work together to catch the train. If they are in the wrong position, the train will take a different route and may take your partners forever to catch up to it. 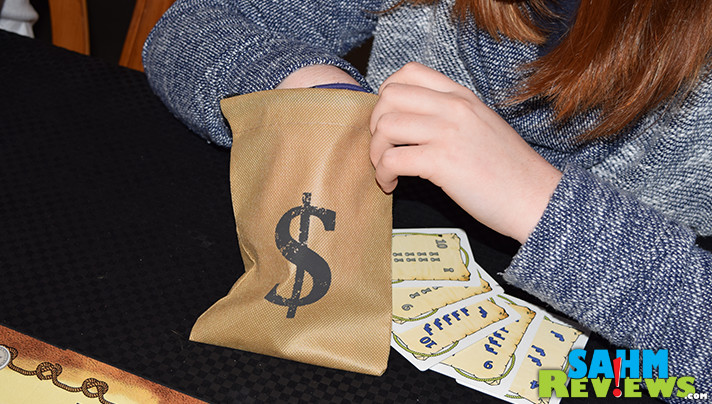 To help with your mission, there are a number of Wanted cards randomly dealt to the side of the board. Each card has a different requirement listed on it that you want to fulfill. Each player may only complete one, and when doing so, takes the card, flips it over and activates their new ability. They also receive a new title, which they should be addressed by for the remainder of the game.

To win at Train Heist, you must collect the pre-determined number of loot tokens. This must be done before the Hangman Marker moves down to the skull and crossbones. The marker is moved any time the train moves adjacent to a town that has no loot to collect. You must also complete your robberies before all of the event cards run out and the train reaches one of the two junctions (switches are removed at that point). If you meet your looting goal, your entire team wins Train Heist! 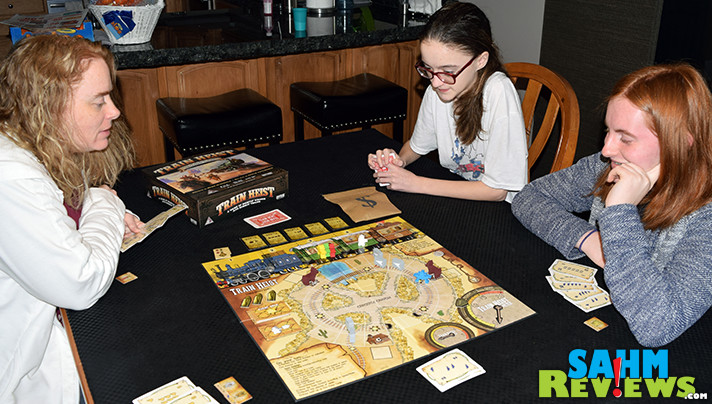 Train Heist also includes alternate rules for playing solo or even competitively, but we found it best when playing under the standard rules. The concept of robbing the train seems simple since it appears all you have to do is avoid the Sheriff. But with the train moving at an ever-increasing speed and the requirements of finishing before running out of event cards or the train passing through empty towns, the clock is ticking and you must take some risks in order to finish in time!

At under $30 on Amazon, Train Heist is a very-affordable title that is the only cooperative train game we’re aware of. Once again, while the game is rated for ages 12+, since this is a team undertaking, it can easily be played by kids much younger (as low as 7 or 8 in our opinion) as long as there is an adult present to explain the rules.

And as always, be sure you are following Cryptozoic Entertainment on both Facebook and Twitter to be notified of their 2018 releases! We’ve heard of at least one coming later this year that has us very excited – but no spoilers at this time! If you’re into art or the printing industry, that one will be a must-have!

What is your favorite cooperative game?