If there’s one thing I can say about gamers, they like their train games. There’s never a shortage of them, several of which we have featured here. There are cooperative games such as Train Heist then there are competitive games such as Colt Express, which includes a 3D play area. However, the bulk of rail games such as Boxcars revolve around traversing and capturing routes on a map and often are economic.

Occasionally, we find one that breaks the mold as we did with Train Heist. Another recent release is Whistle Stop from Bezier Games. Not only does it go off the rails in terms of the typical railroad game, but it also jumps the tracks from their typical line which includes Ultimate Werewolf. To be fair, Bezier Games has some pretty solid titles that involve building castles or colonies, games about how smart you are and even a game about sharing pizza. 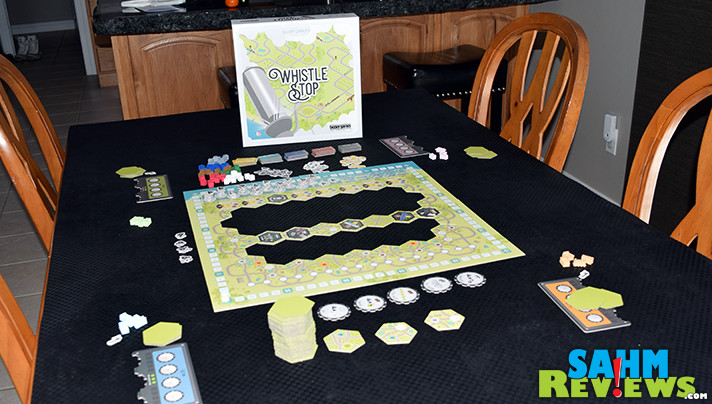 What’s different about Whistle Stop is that it’s a tile laying game so the routes are uncertain. They aren’t even developed yet when the game begins. Setup includes randomly placing tiles with ordinary routes on the East coast, special tiles in the middle and end tiles on the West coast. As a result, no two games are the same. They don’t look the same, the 8 (of 10) end tiles are different and even the available upgrades (maximum of 7 in a 5 player game) are randomly selected from a pool of 12. While many train games have the same overall feel from play to play, it’s unlikely you’ll ever see the same configuration when playing Whistle Stop.

The goal is to score the most points at the end of the game. Isn’t that the deal with most games? In Whistle Stop, it’s referred to as earning fame and there are a number of ways to do that. In addition to fame earned for various actions throughout the game, there are end game opportunities as well. If you own the most of one type of stock, you earn 15 fame points. Have upgrades? Score fame for those. You earn fame for resources and tokens, too. BUT… if you end the game holding onto a valuable piece of land (special tiles) then you’re penalized. There are also several places in the game where you could lose fame for lacking resources. With all that in mind, let’s talk about how to play the game. 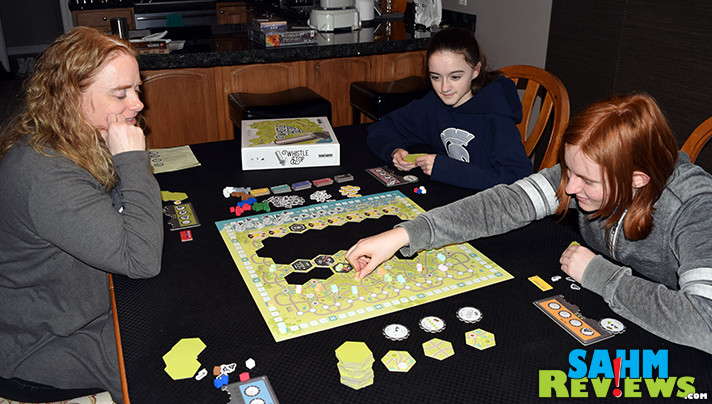 At the beginning of the game, everyone starts with 1 whistle token and 3 randomly selected tiles. The number of trains allocated varies based on the number of players while the number of coal tokens is determined by your starting position. On your turn, you have a couple of options for what to do. One option involves movement (of ONLY your own trains) and the other action involves purchasing upgrades. You can do any of these actions, all of them or none of them.

Taking a movement action means you are going to move your train(s). You may move up to four times using your coal or whistle tokens. Remember how I mentioned that we’re heading west? As a default, that’s what happens. However, if you see something you need to backtrack for, you’ll need to play a whistle which allows you to finish your turn east of where you began. If you lack the required coal or whistle, you cannot move. You forfeit your four actions and receive 1 whistle token as a consolation. Even when you have enough, there will be times when you choose not to take all four movements. 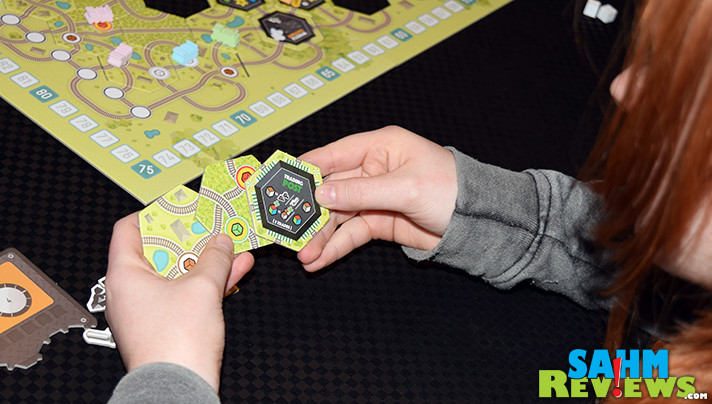 When taking a movement action, you’ll move your train until it reaches a stop. As I mentioned before, the tiles aren’t all placed on the board at the beginning of the game so you may find yourself running out of track. Don’t worry, that doesn’t mean you have to stop. This is where those tiles you received at the beginning of the game will come into play! Select one from your hand and play it then move into the space or along the track as though it had been sitting there. Make sure you place one that is to your advantage – or perhaps to allow you to benefit from an opponent that is headed the same way. At the end of your turn, you’ll get to draw back up to three tiles. 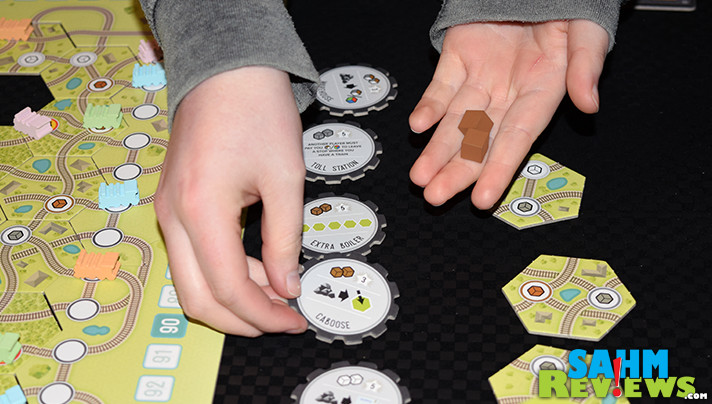 Another thing you may do on your turn is spend resources to gain up to 2 upgrades. Resources are displayed in white or yellow circles along the route and you pick up the ones denoted on corresponding stops. Upgrades allow you to do things your opponents cannot. They’ll help you on your westward journey! 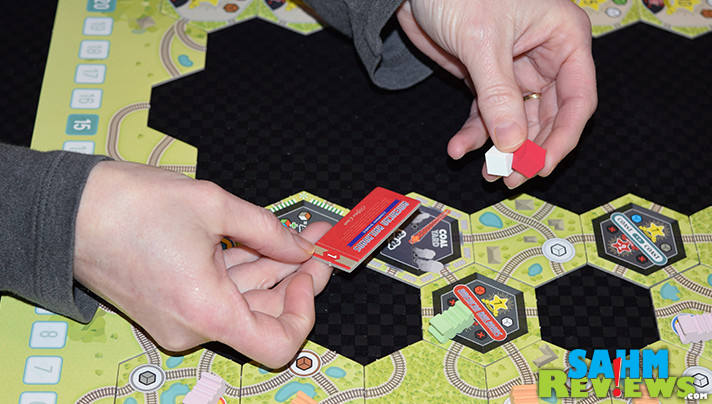 So let’s get back to that westward journey. As you move along the tracks, you’ll take actions when you stop. If you land on a resource space, you collect the related resource. Coal Yards and Whistle Factories let you collect coal or whistle tokens which you’ll need for your journey. The General Store allows you to select one of the noted resources whereas the Trading Post allows you to trade resources or tokens with the general supply. Then there are Town stops where you’re able to spend resources to gain railroad shares. Unfortunately, if you don’t have the resources or choose not to invest in the rail line, you’ll lose fame points. 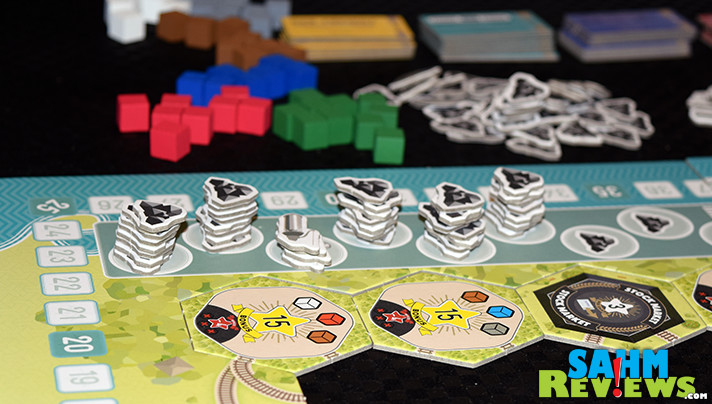 The rounds are kept track of by a timer track so monitor it closely to complete as much as possible before time runs out. Each round, you’ll earn a few more coal tokens from the round tracker and when they’re gone the game is done. But don’t count on the round tracker as a definitive end. If someone rushes their trains across the board, the game will end even sooner. 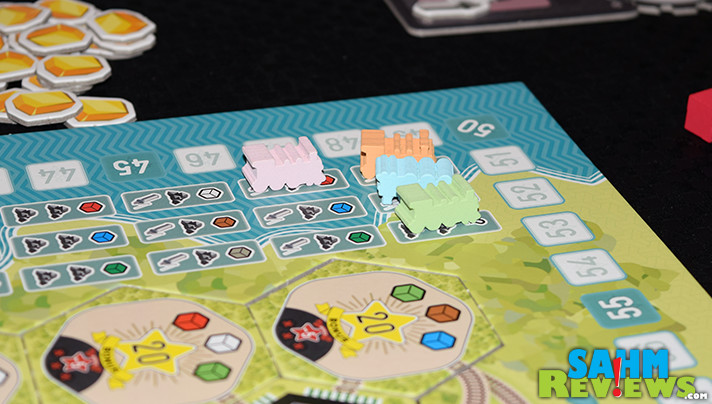 You earn bonuses by reaching the western destination so there’s a careful balance between staying on the track and amassing stocks and resources vs rushing to the end for the best bonuses. You’ll have to plan your own routes to success.

Whistle Stop is currently available for under $40 and is an excellent option for train fans and people who enjoy tile laying games. Steam over to Bezier Games website (or catch them on Twitter or Facebook) to find details about new projects and game upgrades that are chugging toward the finish line.

Do you enjoy games that get set up as you play?