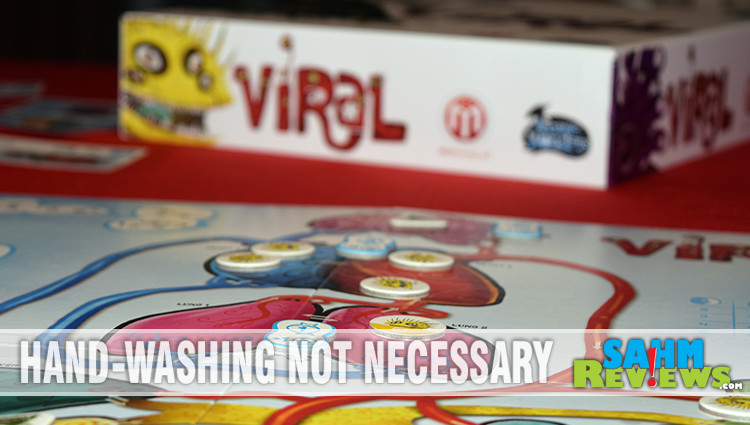 A couple days ago we mentioned how lucky we had been to have not gotten bit by the flu bug going around. Continuing on with the topic of virus-themed games after playing Virulence: An Infectious Card Game, we’ve now moved on from learning about the genetic makeup of a virus and are on to how it travels through the body.

Viral by Arcane Wonders is a brand new game issued late last year at the annual Gen Con convention in Indianapolis. Its release was so popular that their booth ran out of copies very quickly and they had to ship in another whole pallet of games on an emergency basis just to appease the long lines waiting for a copy. You might even say the buzz around the game went viral! (OK, I’ll show myself out.) We weren’t lucky enough to snag a copy, but did get to play our first round of Viral at our local gaming convention, Xenocon, when a friend brought their copy that they stood in line for. 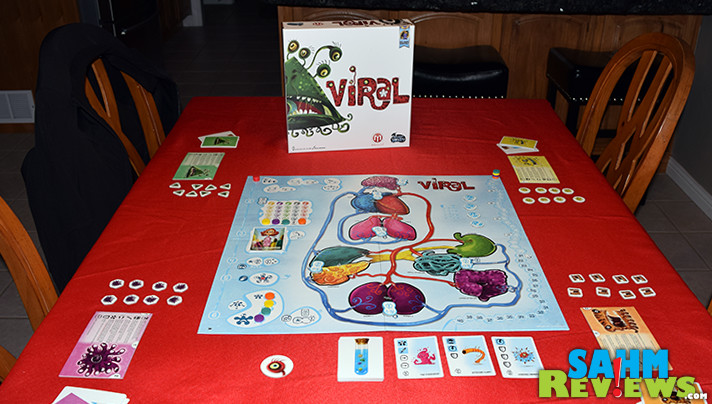 After playing a couple games, we understood the reason for the increased hype surrounding Viral. It was a fun, engaging area-control game with just enough player interaction to make temporary enemies out of your friends. While the viruses depicted in Viral are not rooted in scientific accuracy, the board does present an almost-accurate representation of how a virus might travel through the human body.

In the game of Viral, you take on the role of an individual virus trying to infect a human. But there are up to four other viruses (players) vying to do the same. Only the virus with the most exposure will be victorious and sometimes you might have to fight head-to-head with another virus to prove superiority. 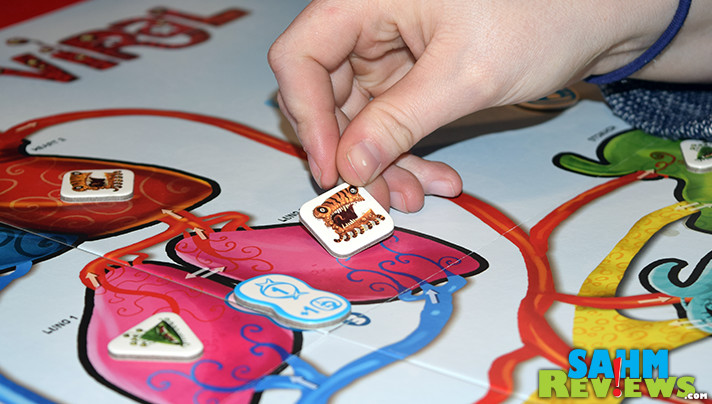 Setting up the game, each player receives a player board and eight matching virus tokens along with three discs of their color to mark their progress on the board. Five Starting Mutation cards and six Zone cards (identical for each player) are also distributed. The rest of the Mutation cards are shuffled into a draw deck, with three being turned over and laid in a row. Six Event cards are randomly chosen, shuffled and placed on the board in a deck with the top card being revealed. The remainder of the Event cards are returned to the box and will not be used. Zone tiles are randomly placed in the six zones, white side up. Players take turns placing one of their Virus tokens into an organ on the board until all organs have one virus. Now you’re ready to begin! 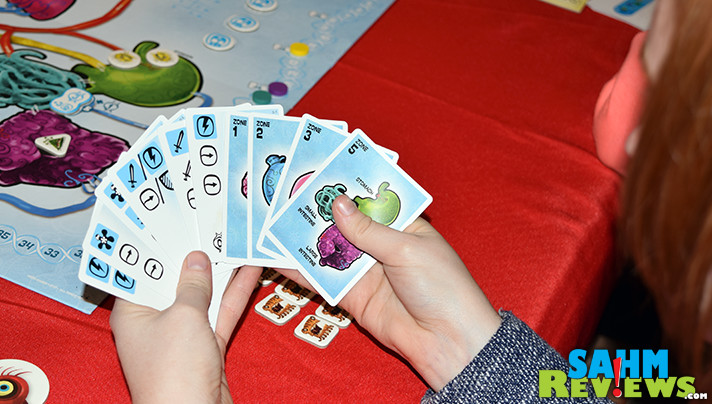 Viral is played over six rounds with each round having six steps. The vast majority of the action takes place in the first step when players decide how to infect or move their viruses. Each player chooses one of their Mutation cards along with a Zone card and sets it face-down to the left of their player board. When everyone has made their choice, they are all revealed at the same time. In player order they are resolved by performing the actions listed on the Mutation card played. 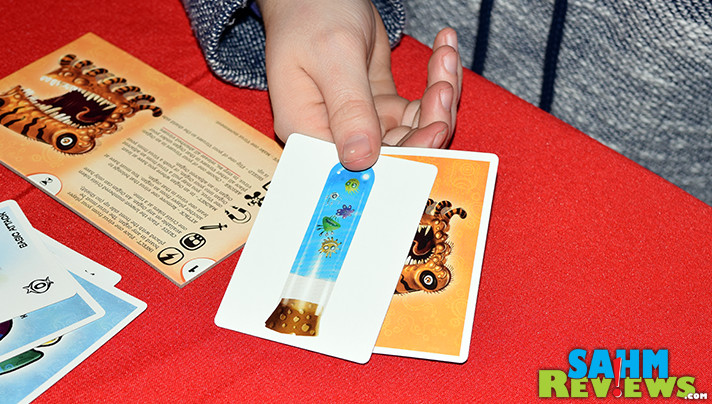 Actions in a blue box must be performed in the same zone as the card you played on that turn. Other actions may be performed on any zone, if possible. These may be resolved in any order the active player chooses and many might have an effect on other players’ viruses instead of your own! These different actions include infecting an organ, attacking (removing) another player’s virus token, pulling/pushing a virus into/from another organ or even absorbing all other viruses into your own! You might also choose to move your virus along the arteries or from organ to organ, or shield your virus from treatment by flipping it to its opposite side. 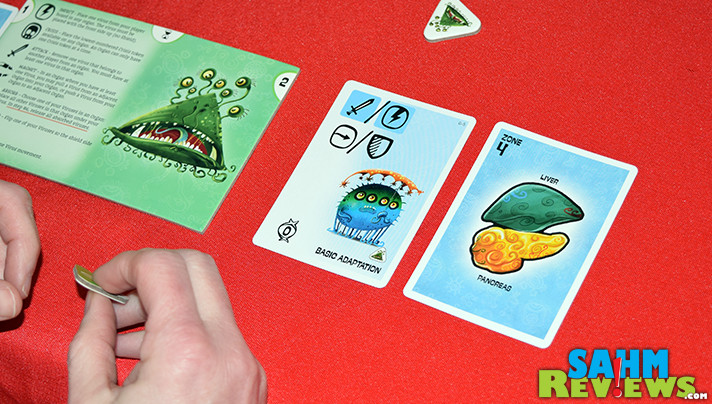 After all players have resolved their actions, this process happens again by choosing another Mutation and Zone card set and placing them to the right of your player board. These too are revealed simultaneously and then resolved in player order. After completion, these four cards are set above your player board so they may not be used in the next round (any cards already in this area are returned to your hand for use during the next round). 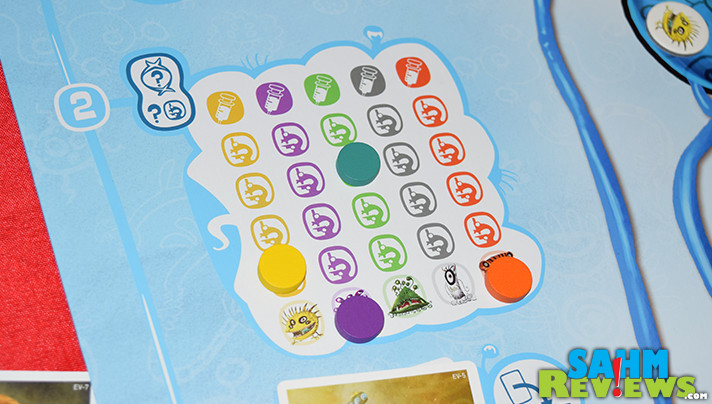 During the second step, the patient is examined to determine which virus controls each of the six zones and points are awarded to that player as denoted on the zone tile. At the same time their research value may increase, representing society’s advancement towards finding a cure for your virus!

Next comes the round’s event. As previously mentioned, six event cards were chosen at random and one will be activated during each round. These usually provide bonuses for achieving temporary goals like controlling a certain zone or having your virus in a certain organ. 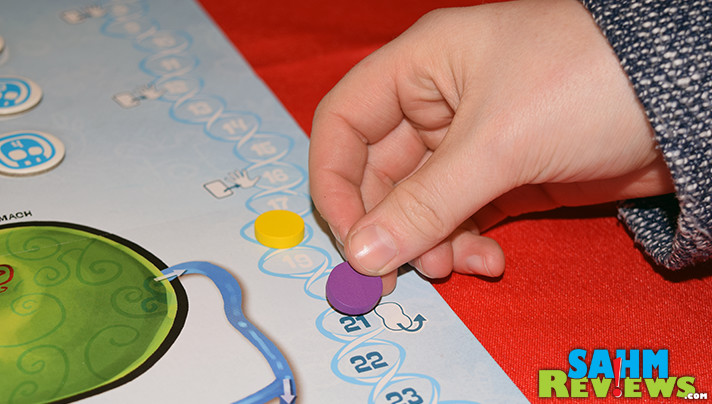 Any time an organ has too many viruses in it (determined by the number of players), it goes into crisis. A crisis token is immediately placed on that organ and during this fourth step is acted upon. The player with the most viruses in the organ receives two points and anyone else present in the organ receives one. Then all unshielded virus tokens are removed and returned to the players.

Doctors are always working on cures, and during step 5 if your research token has reached the top, your virus has been cured. All virus tokens are removed from the patient (unless protected by a shield) and your research token is returned to the bottom. You will continue in the game as normal, technically as a new virus strain. Lastly, to end the round, the tie-breaker track is adjusted based upon how many points each player has (being behind means you break ties easier) and the first player marker is passed to the next person in clockwise order. 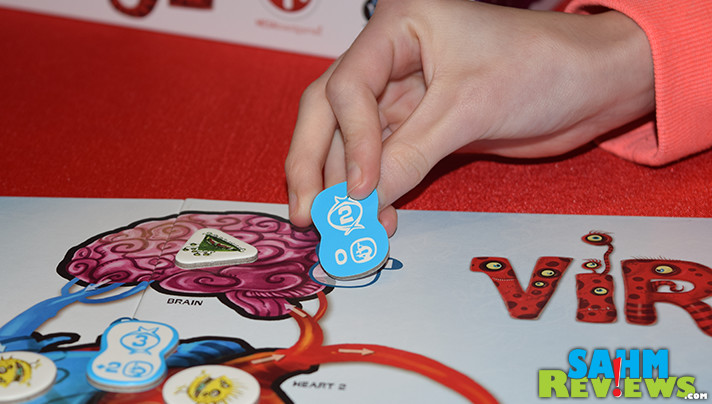 If that didn’t seem like enough going on, the scoring track also triggers certain events! Every time you pass a mark with a card icon on it, you get to either choose one of the three Mutation cards available or draw from the top of the deck. Once any player passes the “20”, advanced scoring is triggered. All Zone tiles are flipped to their opposite sides, typically increasing the value of being in control of a zone or lowering the research cost.

Once six rounds of Viral are complete (you will know this because you have resolved the sixth event card), final scoring commences. To your current total you will add one point for every virus token still on the board and any victory points from Mutation cards in your possession. The player with the highest total wins Viral! 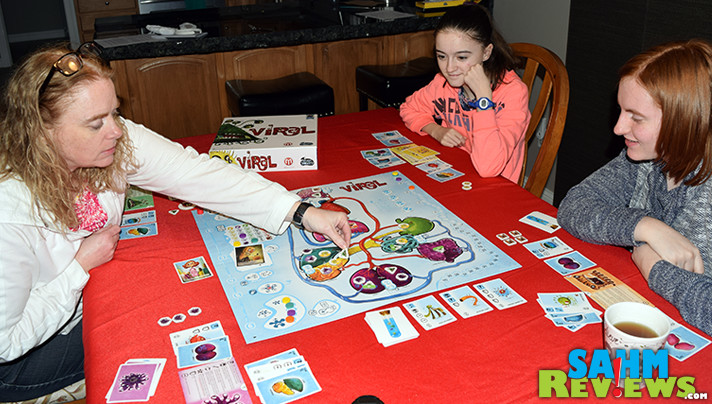 Recommended for ages 12+ and playing up to five at a time, you can expect a full round of Viral to last around 90 minutes. We would suggest it can easily be enjoyed by children as young as 7 or 8 when playing with an adult and recommend doing so to help introduce them to various internal organs. It might spark great conversation about what each organ does and how they interact with each other.

No longer in short supply, you can find Viral on Amazon or at your local game store for around $40. Because we’re following Arcane Wonders on Facebook and Twitter, we’ve already seen sneak peeks of their next title, Critical Mass. I guess we’d better get in line now!

There’s still plenty of time to win a copy of Viral for yourself in our 150+ Days of Giveaways!

13 comments on «Viral Board Game Overview»