So far this year we’ve been lucky not to get hit with the flu bug. We get our shots every year, and although they may not always be for the correct strain, our luck hasn’t run out yet. In fact, we haven’t heard of too many local friends that have caught it either. Just a couple here and there, but nowhere near the outbreaks you hear about on television.

Of course I’m penning this article a couple weeks before you’re actually reading it, so maybe by now we’re all sick in bed or praying to the porcelain god. Hopefully right now the family is enjoying a nice spring by being outside and not having to make sure we’re drinking enough fluids and checking fever temperatures. Fingers crossed!

We have a couple new games in our collection (other than Pandemic) that are all about viruses and things that are contagious. What better way to celebrate our illness-free season by featuring a card game and a board game that will help remind us of exactly how lucky we’ve been?! And we’ll probably learn something in the process!

You probably already know of Genius Games, whose line of card games are heralded throughout both the gaming world for their fun play and the educational universe for being scientifically accurate. We’ve always believed in games that teach through engaging play, and their latest release, Virulence, is no exception. 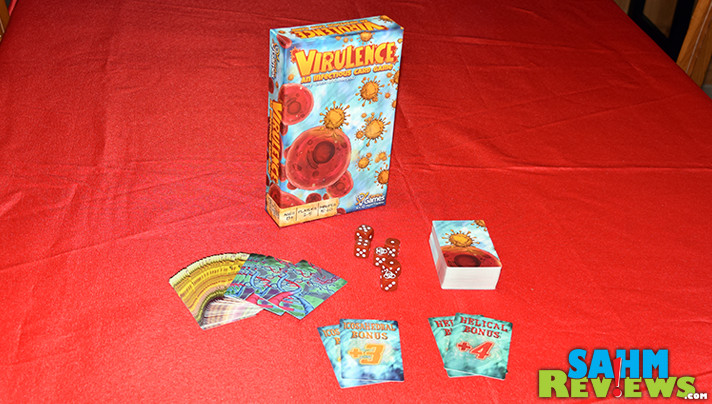 I’ll start off by saying that of all the titles from Genius Games we’ve played, Virulence is the most approachable to date. Not because of the theme since you don’t want to get too close to a virus, but because the game play is very straightforward and similar to a number of other card games issued in the past few years. At its heart, Virulence is a game about set collecting and bidding to improve your positioning when it comes time to choose cards. Let’s examine it a little deeper.

Inside the Virulence box you’ll find six custom dice and over 100 cards of different types. These cards include Starting Virus cards (7 for each player), Viral Component cards (the cards you’ll be collecting) and Bonus cards (awarded for completing sets). Each participant receives an identical set of seven Starting Virus Cards numbered one through six with a seventh Reassortment card. The 81 Viral Component cards are shuffled together and placed in the center of the play area. The four Bonus cards are shuffled together and one is randomly removed and put back into the game box. The remaining three are set in a stack near the playing area with the top card flipped face up. 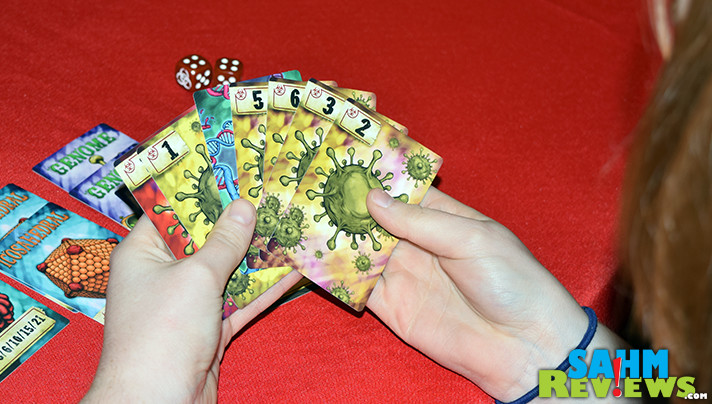 To begin a round, cards are drawn from the Viral Component deck equal to the number of players and laid face up in the center of the play area. Everyone then chooses one Virus card from their hand and places it face down in front of them. Once everyone has chosen a card, they are all revealed at the same time. In order from highest to lowest, players take turns choosing a card from the available face up Viral Component cards. Any that aren’t chosen that round are removed from the game. 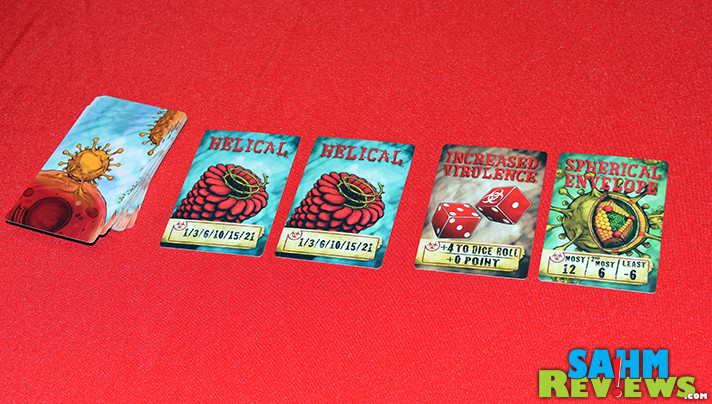 If two or more players tie for virulence, the tie must be broken before cards are chosen. Each tying player rolls two of the included dice and adds their totals to any Increased Virulence cards they have in front of them from previous rounds. Then those players choose Viral Component cards in order from highest to lowest before continuing on to the next-lower player who wasn’t involved in the roll-off. 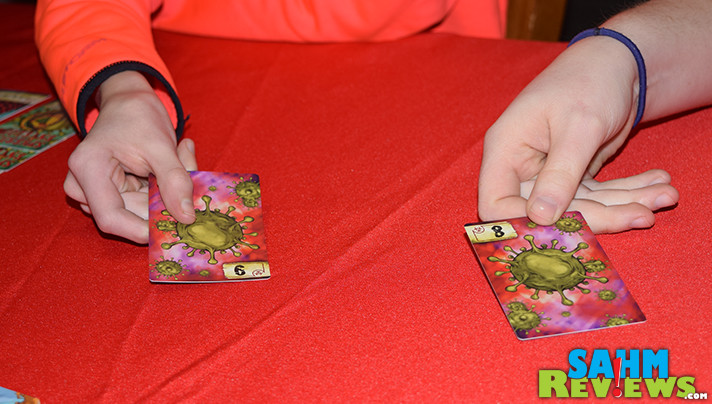 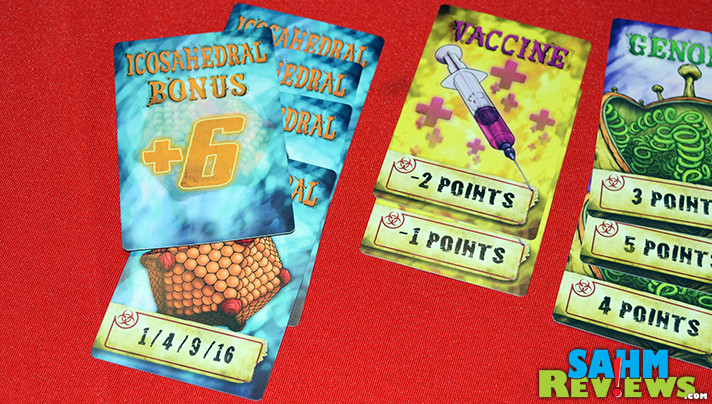 The two main types of cards you will collect form the Viral Component deck are Icosahedral and Helical cards. These award points at the end of the game according to how many you have collected in a set. In addition, if you are able to complete a set while the correct Bonus card is face up on the Bonus deck, you may take that card for additional points. 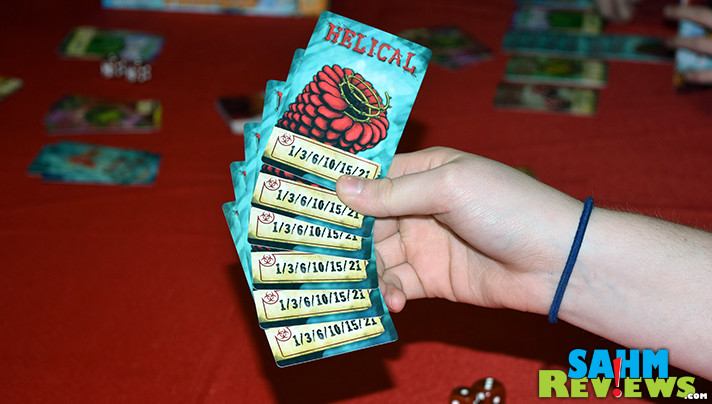 Other valuable cards you might choose are Wild cards, Genome cards worth a set number of points at game’s end, Spherical Envelope cards which award points to the players with the most collected, previously-mentioned Increased Virulence cards that help you win ties or Vaccine cards that penalize you for their possession. There are also Mutated Virus cards that replace one of your Starting Virus cards, possibly increasing the value of your bid. 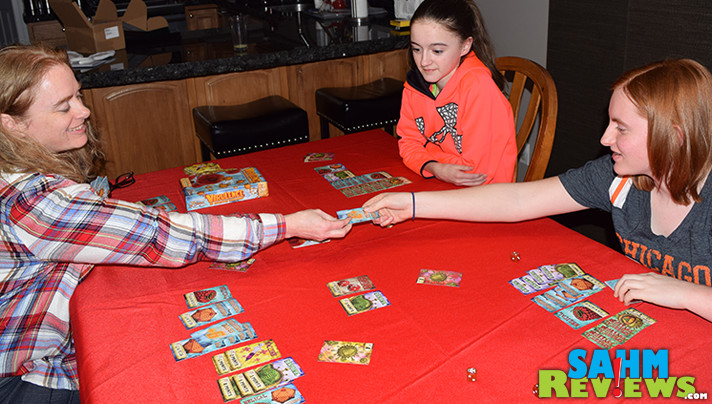 Once the entire deck of Viral Component cards is depleted and the selection row cannot be filled, the game of Virulence ends immediately. Everyone calculates their score for the various card types mentioned above and the player with the highest overall total wins Virulence! 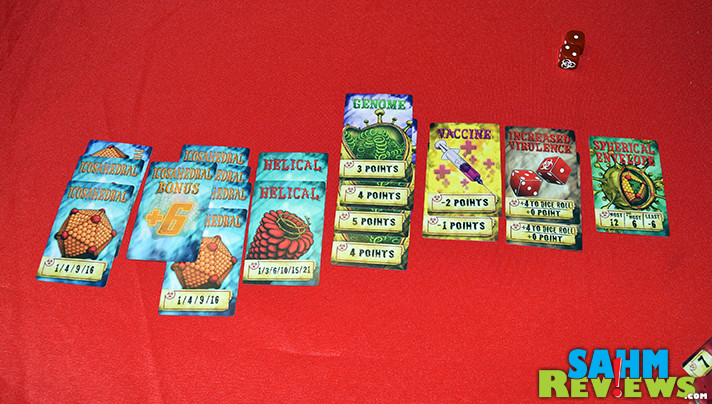 As with most titles from Genius Games, the instruction booklet contains a valuable primer about the science behind the subject and the game. By playing Virulence, you’ll become familiar with the scientific terminology and gain insight into the structure of a virus and how the infection process takes place.

Sickness-theme aside, Virulence is a great implementation of the set-collection genre, and with the addition of a bidding process keeps things even for all players. You can find copies on Amazon or direct from Genius Games (use our 15% off code to save – sas-15-off-aff)! And as always, make sure you’re following them on Twitter and Facebook to see what they have coming next!

Did you make it through flu season safely this year?