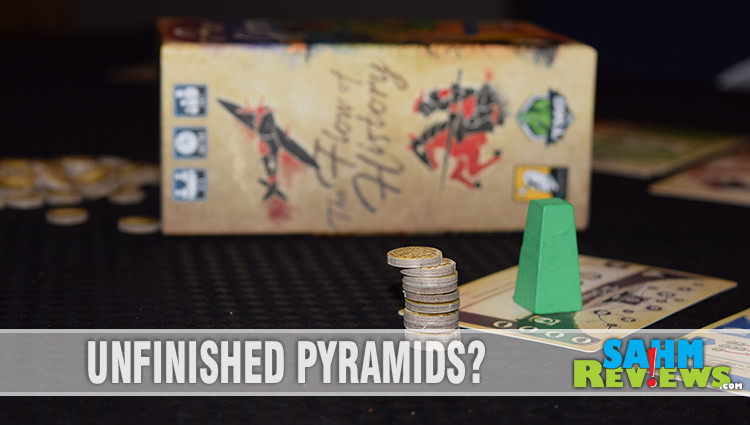 There is such a void of games that teach and entertain at the same time. Sure, you can find some lesson or fact in nearly every game, but ones that do a good job of educating and providing a fun experience at the same time are rare. Usually games fall decidedly into one camp. Either they are designed with teaching in mind and are as boring as possible, or they are extremely fun to play with great strategy and mechanics and set in an imaginary world or a pseudo-accurate era.

There are a handful of games that bridge both styles. Asmodee’s Timeline series has you putting events, inventions and more into chronological order. Academy Games’ Birth of America series recreates famous battles from the early years of our country. And we can’t leave out the wonderful card games by Genius Games that familiarize players with terminology and interactions from the world of science.

This month we’ve had the pleasure of trying out a brand new game from Tasty Minstrel Games and designed by Jesse Li (Ponzi Scheme, which we loved) – The Flow of History. Not only does it feature famous inventions and events from various eras, political ideals, leaders and celebrities also make appearances. 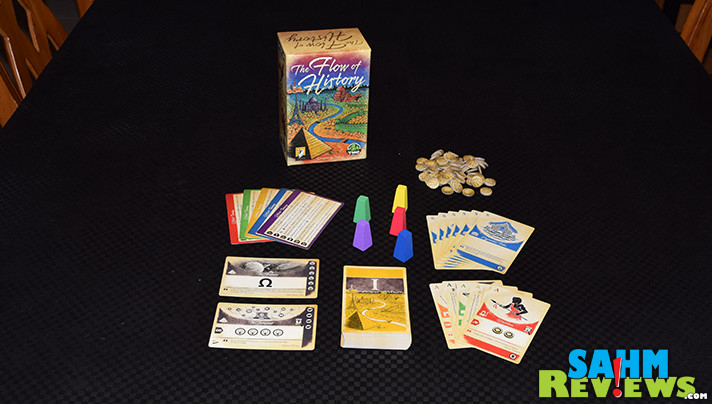 At its heart, The Flow of History is a game about collecting the right icons depicted on cards, scoring them at the end of the game. But it is much more than just grabbing the cards you want – you must go through a couple steps to earn them while building up your own nation. And then later you might lose them due to the actions of your opponents. Let’s take a look at how this all happens.

The main draw deck is created by individually sorting the five ages into separate piles and shuffling them. They are then set in a stack in order with the two end-game cards, “The Internet” and “The Future”, being put on the bottom of the pile. The five cards marked with an “A” are dealt out face up next to the draw pile to create the starting cards for the market. Each player (The Flow of History supports up to five players) receives an “S” card to begin their Nation. They also receive four resource tokens (the game’s currency), a reference card and a player marker. 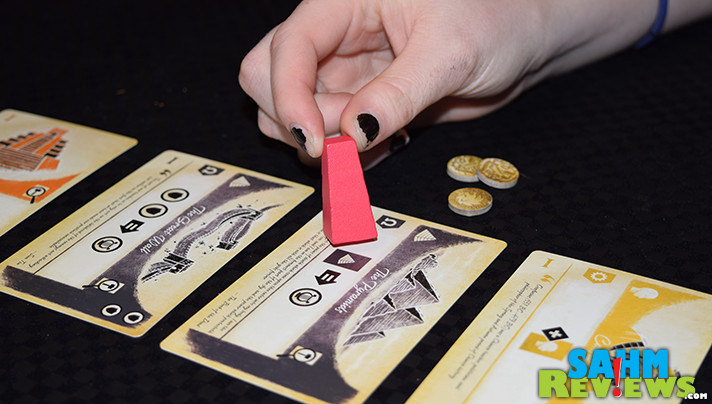 Each round of play is divided up into two phases, the action phase and the cleanup phase. During your action phase you may take one action of your choice from a pool of five actions. First, you may invest in a card in the market. This signifies your nation’s investment in a leader, technology, building, etc. and you will place your player marker on the card of your choice along with resource tokens as your ‘bid’.

If you have already invested in a card, your action on your next turn might be to complete the construction by taking your claimed card and returning your resource tokens to the supply. You will receive resource tokens equivalent to the number of matching icons already in your Nation, so it is entirely possible to get the card for free or to even make a small profit on the transaction! If the card has any immediate effects listed (Instant, Attack or Attack All), you will perform those right away and then place the card into your Nation, sorting it by color and laying it on top of any previous cards of that same color (Leaders and Wonders of the World are exceptions). 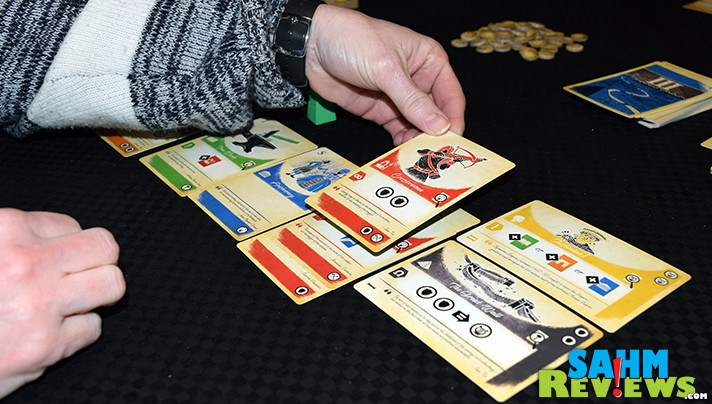 If another player has invested in a card you want, you may snipe it by paying them the value of their bid and taking the card right away into your Nation. You do not get the same bonus of matching icons as if you had invested and completed on your own, but you do get to acquire the card in one less turn than normal. As a consolation, the player who was sniped also gets to retrieve additional tokens from the supply equal to half of the total amount present, rounded down.

Some of the cards have a gear icon on them that can be activated on your turn as a fourth action option. Declare which card you are activating and perform the listed task, which can include drawing a new card, taking a specific card from the market or even earning additional resource tokens. As a last action option, in case you are out of tokens, you may harvest resources from the supply, taking half of all the tokens available, rounded down. 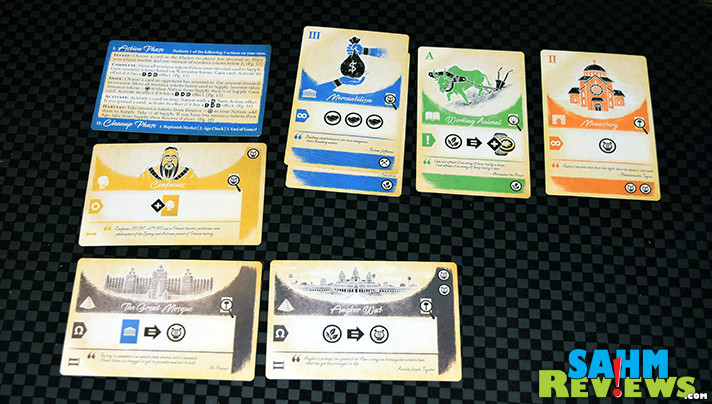 As previously hinted, each time you acquire a new card it is added to your Nation. It will cover up any previously-gained cards and prevent you from using any ability listed. But it does not cover up the icons on the bottom of the card – these still provide the acquisition bonuses and end-game points.

After the Action phase is complete, a general Cleanup phase is performed. The market is replenished by drawing new cards until the market is full. Any non-invested cards in the market that are two ages older than the current age showing on the top of the draw deck are then discarded from the game. End-of-game conditions are then checked and if the game continues, the next round of actions begins. 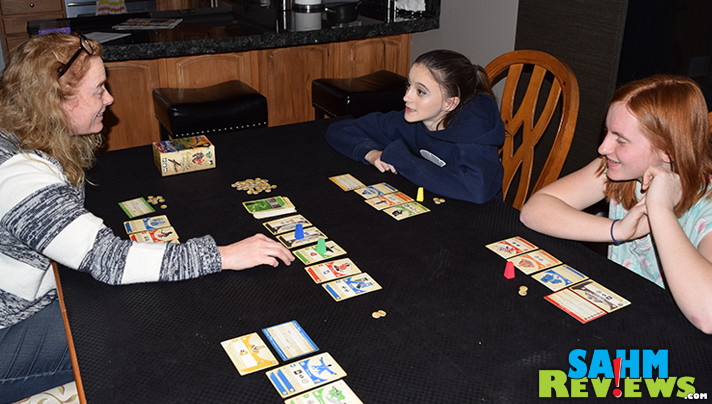 Once the Future card is added to the market or gained by a player due to activating another card’s action, the game ends immediately after the current player’s turn. Victory points are totaled by referencing the icons on the bottom of every card collected into your Nation. Culture icons are worth one point each, with all of the others worth one point for every two icons (a half point each, ignoring fractions).

Many of your collected cards will also contain an Omega symbol, denoting extra points awarded at the end of the game. Compute the results of each end-game scoring effect and add them to your total. The player with the highest overall sum wins The Flow of History! 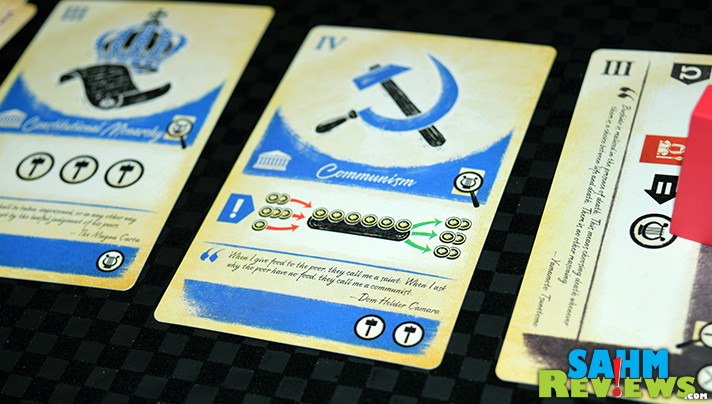 Not only does The Flow of History depict actual events, inventions and personalities from history, each card has an appropriate quotation about the subject matter. Government cards also explain their core theories through the cards actions (example – collecting the Communism card requires everyone to immediately submit all of their tokens into a pool, which are then distributed evenly among all players). 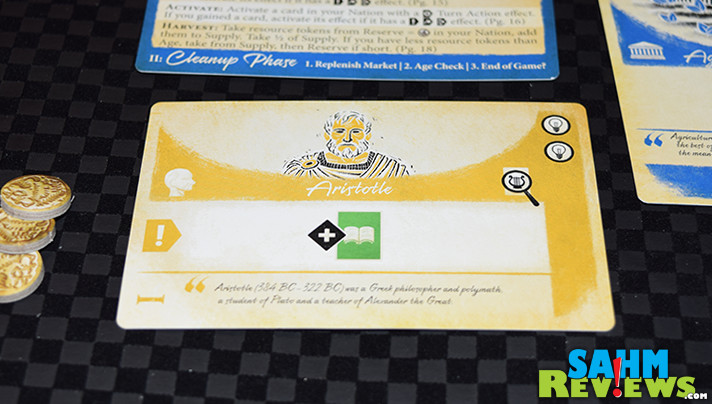 If you’re like us and love games that teach and entertain, then The Flow of History should be on your shopping list. With a MSRP of under $25, you will find your copy on Amazon or at your local game store. While advertised for ages 14+, there is great value in playing with your younger kids, especially if you take the time to read aloud the great quotations and talk about the subjects depicted.

What’s next for Tasty Minstrel Games? You’ll have to follow them on Facebook and Twitter to find out! 2018 is shaping up to be a historic year for them and we expect to see a number of new releases this summer! Let them know you’ve love to see more game that both teach and entertain!

What is your current favorite “educational AND fun” game?

4 comments on «The Flow of History Card Game Overview»