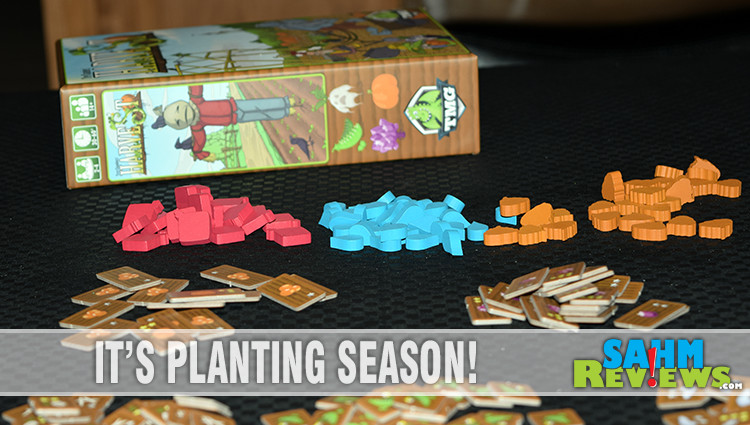 If there’s one game theme that we’re always attracted to, it is ones about farming. We do live in Iowa in the middle of corn and soybean fields, so it is natural that we’d have a familiarity with the process of bringing crops to life. In the past we’ve thoroughly enjoyed Agricola and it’s smaller cousin, Agricola Family Edition. And recently Nicole discovered a dice rolling game in the same theme, Harvest Dice. But I’ve been playing one that fits into that 30-60 minute sweet spot that takes more strategy and planning than just rolling some cubes from your hand. Harvest by Tasty Minstrel Games is what we’re currently serving up!

Harvest is another title in Tasty Minstrel’s long line of what I like to call a “big game in a small box”. Most small box games are just a deck of cards or a few dice and a game that while entertaining, is meant to be only that. Somehow this company continues to find games to publish that push the envelope of what you should expect from a small box. Thief’s Market, The Flow of History and Flip City are all great examples of ones we’ve featured where you get so much game for your money. 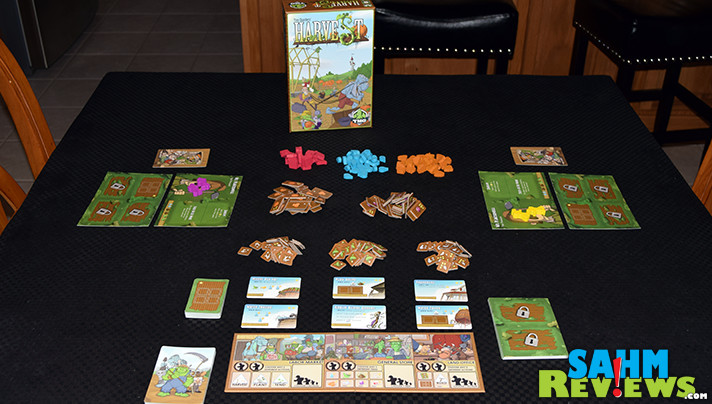 In Harvest, you are predictably trying to become the best farmer in the area. To do so you must purchase seeds, plant and fertilize them (poop meeples!), water and then harvest the fields and then do the same things over a course of only five rounds! 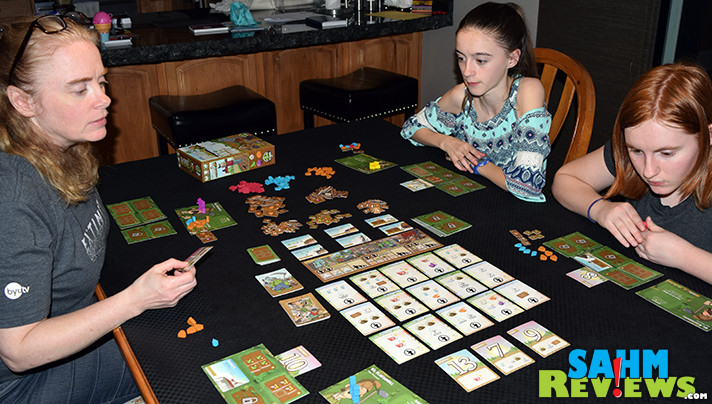 Each player receives two custom farmer pawns of the same color and are given two character boards, of which they will choose one. Collect the resources, crops and seeds shown at the bottom of your chosen player board, returning the unused player board to the box. A town board is placed in the center of the table and the various seed/crop chits are piled by type next to the town. The three resource token types (fertilizer, water, elixir) are also put into their own piles and set next to the town board. Players also receive a farm board in which to begin their farm. 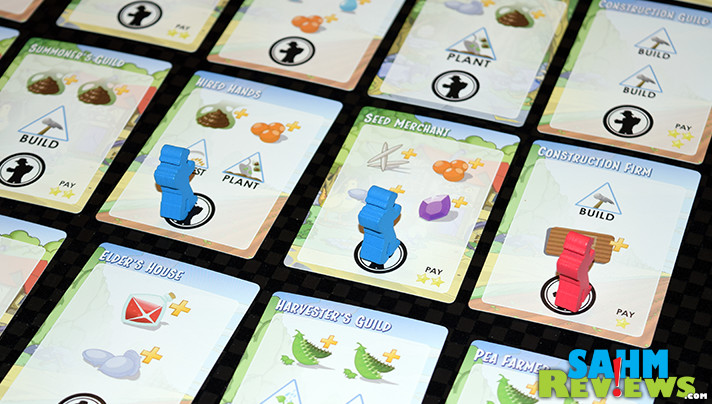 Also at the start of each round, new action cards will be dealt out face up just below the town board, equal to the number of players. These are additional actions you may take on your turn by placing your farmer meeple on the designated space. Only one player may be in any spot, so the first to take it locks everyone else out. Of course, as the game progresses there will be many more actions to take than turns since all players only have two farmers to work with. 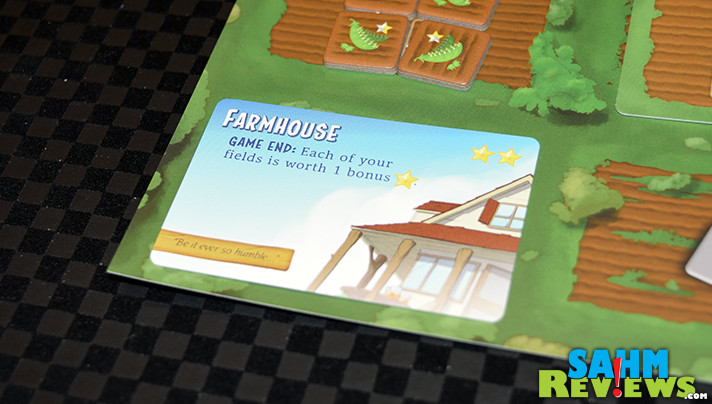 Actions will vary from expanding your farm (giving you a larger area in which to plant), plowing a field (can’t plant on just dirt, it needs to be prepared) to constructing a building (that tractor has to be stored somewhere)! Of course the meat of the game is to get the plants into the ground. To do so you’ll need to have seeds on hand, fertilizer to get them planted, water to tend them and then time to harvest them from the ground. 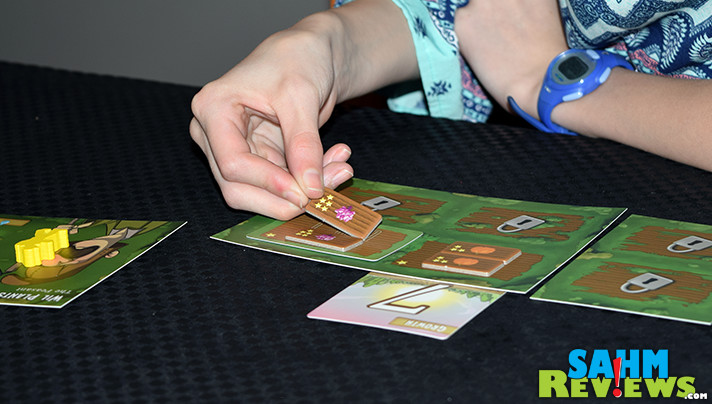 Each time you preform a true farming action you are converting your crops into something larger. This is represented by stars on the chits and your ultimate goal is to collect as many stars as you can. Some crops perform better than others but take up more room. Others are cheaper to get into the ground but don’t pay off as well when it is time to harvest. You’ll have to decide which path is best for your farm based upon the materials you begin the game with and which action slots are available to you on your turn! 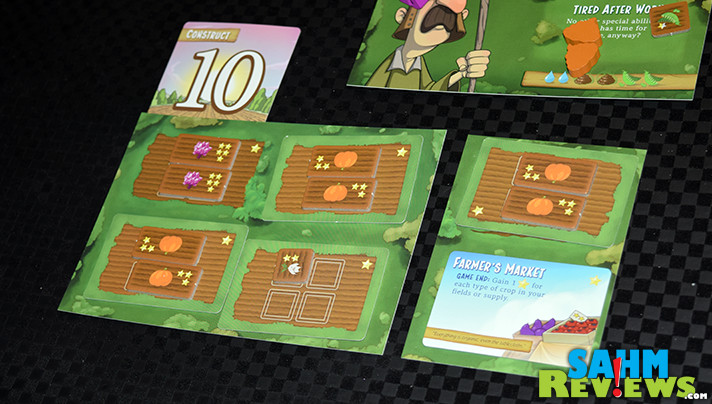 Each round consists of placing your two farmers one time each, so an entire game of Harvest will only allow you ten turns. You’ll just have your farm producing and before you realize it, the game is over! Don’t worry, other players are in the same boat (on the same tractor?). Remember, that’s why we chose Harvest in the first place – games last well under an hour and there are other solutions if you’re looking for a multi-hour strategy game!

And at around $30 on Amazon or at your local game store, it is much more affordable than one of those comparable big box games. A travel-friendly size (but does still need a larger playing area), it is a great solution for those of us that prefer a little more meat (and vegetables) in our games than what is normally found in the market!

Be sure to check out Tasty Minstrel Games’ website for news about their current Kickstarter campaign for the reprint of a long out of print game, Homesteaders. We’ve already sent in our pledge and encourage you to check it out as well. If you want to learn more about it, watch their Twitter and Facebook feeds for up-to-date details!

What is your favorite farm-themed game?