No matter how long we play games, there’s one theme we will always gravitate towards – the farm. Living in Iowa has given us a special appreciation for the hard work put in daily by our farmers. Whether it’s a card game like Dirty Pig or one that’s more strategic like Harvest, we enjoy paying tribute in our own way. Fortunately there’s a farm game of almost every game type on the market!

We’ve recently been enjoying the resurgence of games that are appropriately referred to as roll-n-write. Yahtzee was one of the originals – you roll dice and write down the results. Today’s games are much more complex with strategic decisions and custom dice. Lately we’ve been enjoying games that are closer to the original, and we’ve found that in Dice ‘n Score Farm by R&R Games. 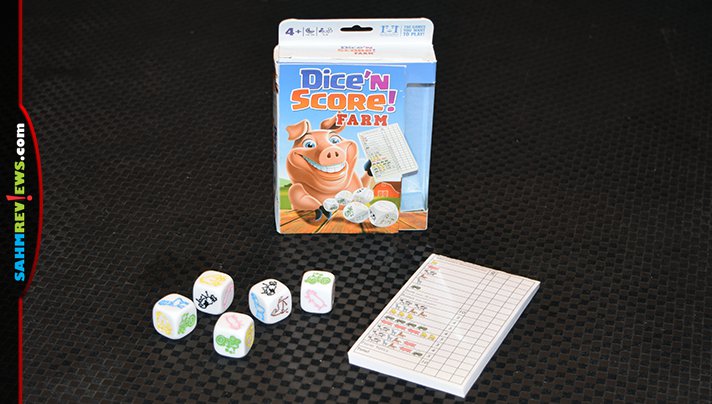 Dice ‘n Score Farm is best described as a Yahtzee variation. Instead of regular pipped dice, it features five custom farm-themed versions. The rules are almost exactly the same as the classic – roll all five dice and reroll as many as you’d like up to two additional times. Then write your result down on the custom included score pad. 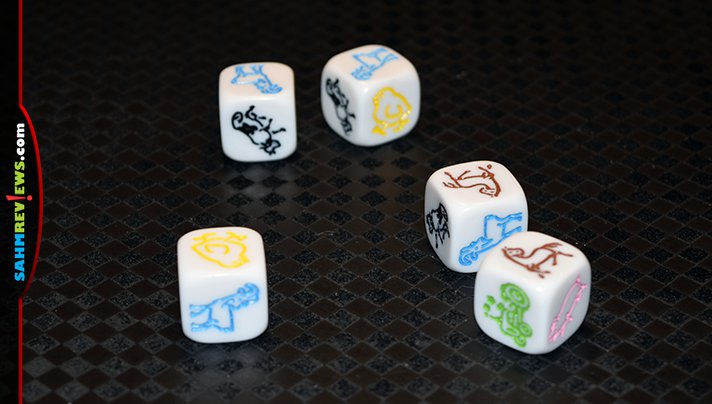 The difference is that since you’re not dealing with numbers, instead rolling for pigs, chicks, goats, horses, cows and tractors, you have to match the depicted matches and series. The top part of the score pad is identical to Yahtzee. Write down a point total equal to the number of the matching icon you rolled. If you manage to collect at least 18 total points among all six, you will earn an additional 10 point bonus.

The bottom half of the Dice ‘n Score Farm sheet is where you’ll find the greatest differences. A pair of cows are worth two points. Two pair (horses and goats) are worth four. Three chicks earn you three points while four tractors reap four. Full houses of three pigs and two chicks net five point and a “Farm Yatzy” of any five matching symbols rings up ten additional points! 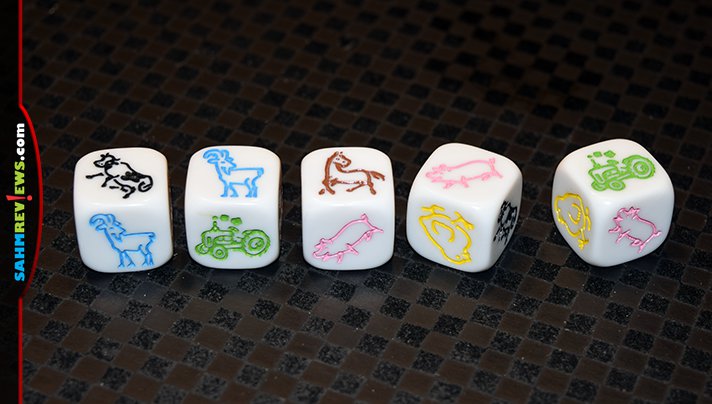 Straights are similar in that you must match the icons exactly. Instead of just having a small and large straight, there are three to work on. Cow, goat and horse earn you three points. Add on a pig and get four. Roll a tractor in addition and max out at five points! There no “second chance” space either – every roll must score or take a zero! 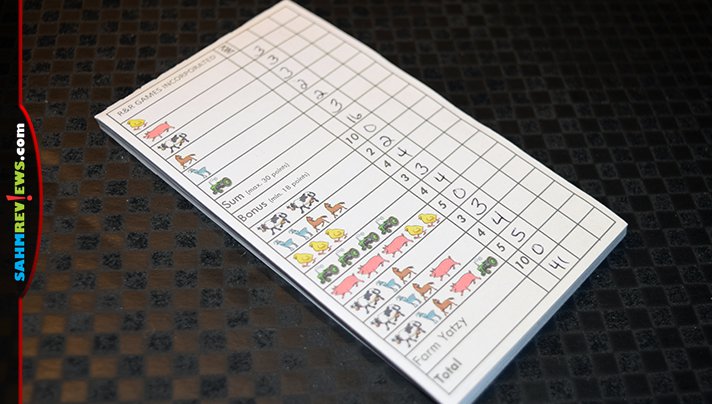 Dice ‘n Score Farm can be played by any number of players – even solo! We found the iconography to be much more desirable for younger players who maybe haven’t learned to count yet. The requirement to match the animals exactly made getting some of the items (straights, four-of-a-kinds) a little more difficult, but there were plenty of other spaces to work on if the rolls didn’t go our way.

Pick up a copy of Dice ‘n Score Farms on Amazon or at your favorite local game store for around 8 bucks. We’re early in the season for conventions, so find out what R&R Games is sowing by following them on Facebook or Twitter!