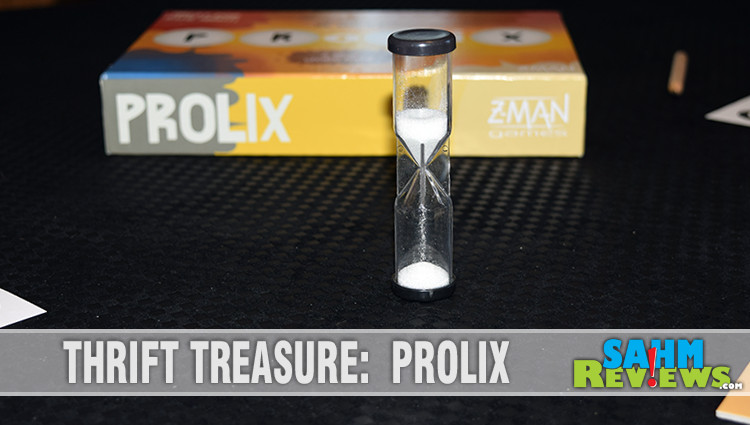 It’s fun when we find more modern board games at thrift. Anything by Z-Man Games, Rio Grande Games or even Mayfair Games are likely to appear on the shelves since the companies behind them have been around so long. What’s even more fun is when the game is created by a designer we’re familiar with. Such is the case with this week’s Thrift Treasure!

Prolix by Z-Man Games, released in 2010, was designed by Gil Hova. We’ve featured The Networks by his new company, Formal Ferret Games, and selected their latest release, Wordsy, for inclusion into 2017’s holiday gift guide! As it turns out, Prolix was Gil’s very first published game (according to BoardGameGeek) and appears to have set the stage for the creation of Formal Ferret and their entry into the market as a known publisher! And we found our copy for only $2.88! 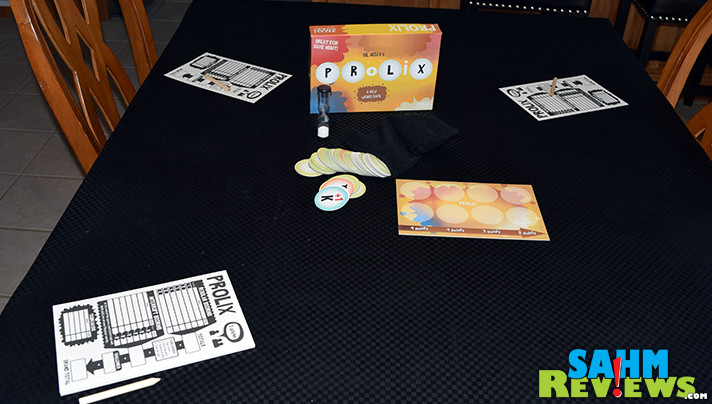 Prolix is part word game, part speed game. Like most other games of this genre it requires you to come up with a word using the letters on the board. Unlike the others, every letter in your word need not be in play. In fact, the letter tiles included with Prolix do not display an vowels at all. And the values of the letters change as they move position across the board!

Prolix is played over 5-6 rounds, depending upon the number of players. The included board is seeded with eight random letter tiles and the active player tries to use as many of them to create one word. As I previously mentioned, just because a letter doesn’t appear on the board doesn’t mean you can’t include it in your word – you just won’t receive any points for it. In this photo example, one might call out “SMILES” or “FACEPLANTED”. 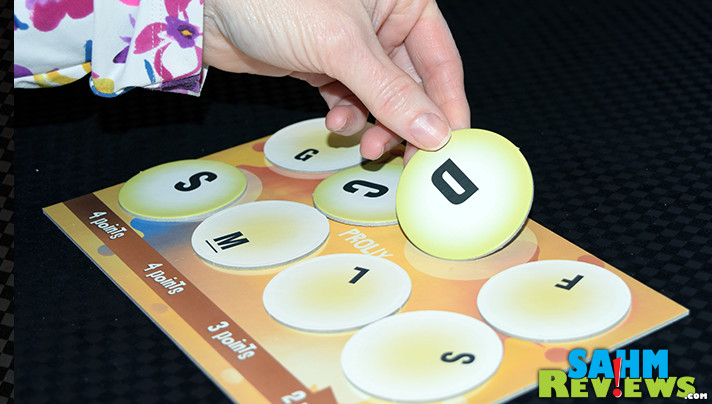 You then receive points for each letter used in your word that is on the board, taking into account the point value at the bottom and flipping them over to keep track. Some letter tiles (like “Q” or “X”) will have a +1 or +2 bonus to reward you for their difficulty. After you score your world, the two rightmost letters are removed, the remaining six tiles are slid to the right and two new letter tiles are placed. It is then the next person’s turn to find a word.

Mixing things up and keeping the game moving, if you are not the active player, but see a very strong word that will score lots of points, you may interrupt the active player and call out a word. When you do so, you will score that word, less two points, and put it on your score sheet in the interrupt section. At the end of the game, interrupt words replace the lowest-scoring regular word. But be careful – they replace them even if they are worth less! So you’ll only want to interrupt when you’re positive you’ll score big! 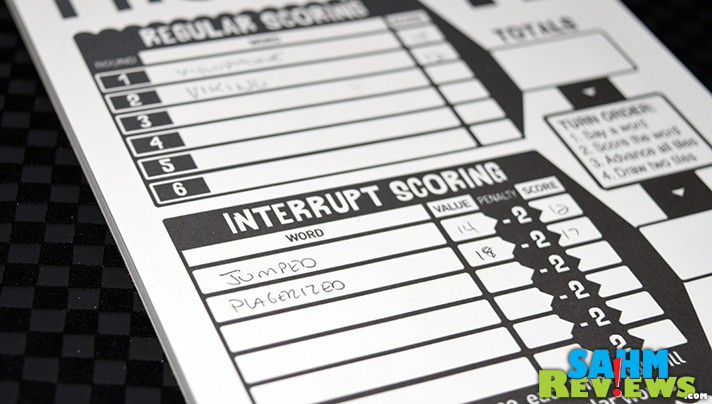 After interruption, the original active player gets another turn. If that person is interrupted twice during the same turn, they score zero (we elected to remove this rule when playing with opponents of widely different ages). Zero is fine as long as you have an interrupt to replace it, so don’t worry about that low score. In addition, if a player is taking too long to come up with a word, another person can flip the included timer, giving them 45 seconds to submit an answer! (We didn’t use this rule either.) 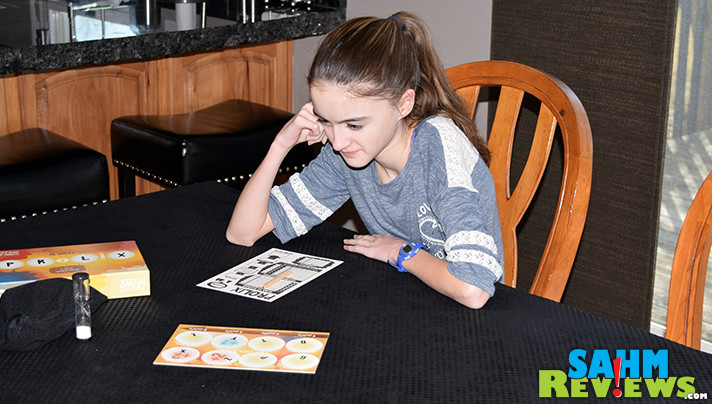 Additional rules dictate what words are valid (no proper names, hyphenations, etc.) and you cannot repeats words by just making them plural, past tense or adding a suffix like “ing” or “ly”. All words must be unique and agreed upon by the other players or you’ll have to come up with another. After 5 or 6 rounds of play, scores are tallied and the person with the highest total wins Prolix!

Designed for 1-5 players, Prolix is probably best played by participants with equal vocabulary skills or you’ll find yourself omitting rules like we did. Expect a full game to last under 45 minutes and copies can still be found brand new on Amazon for around $18. Be sure to check out Gil’s most popular game, The Networks, especially if you’re a fan of games with a little more meat to them!

How do you think you’d do at a word game where you could add any letters?