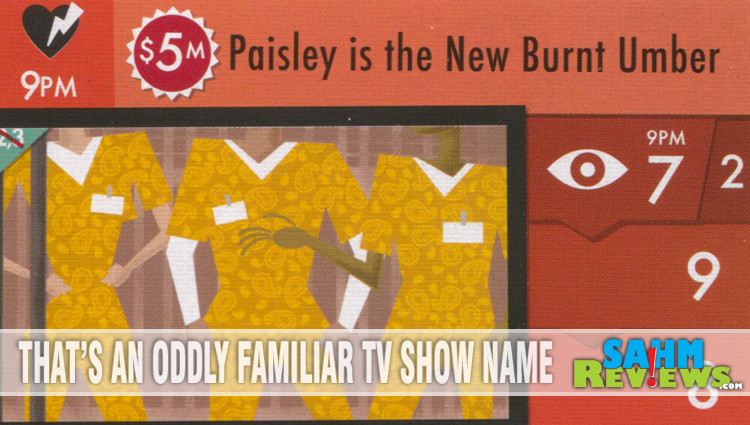 The Networks Board Game Overview

Each year as networks announce renewals and cancellations of their prime time schedule, without fail something we love gets included in that list. We always hope that another network will pick it up but seldom do we see that happen. Network show announcements has never been something to spark a question for the girls, but this year they are older and the realization that a show they like(d) will now only be available in syndication has them asking, “Why wasn’t it renewed?”  We explained the many possible reasons including that viewers lost interest, the actor moved on to other projects or was asking too much – or even worse, the advertisers backed out. Some shows take a year to develop a fan base while others do well the first year then fizzle after. Sometimes the advertisers don’t back a show until it has established itself and other times they’ll invest as soon as they hear who the stars will be. It takes a perfect storm of good things for a show to last as many seasons as The Simpsons.

Once the girls grasped the concept, how networks work all started to make more sense. We were able to explain syndication and why some shows change the lead actor/actress or why it was moved to a new time slot. Then we realized it was time to introduce them to a new game. All those TV ideas are put into play in The Networks game from Formal Ferret Games. Utilizing proper timing, actors and advertisers, the goal of this game is to have the most viewers after 5 seasons. 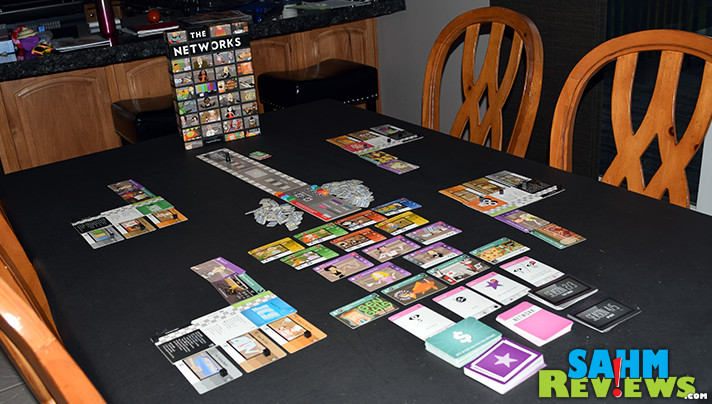 A year ago, the girls didn’t understand the theory behind The Networks game to be able to play it well. This year is another story! Had we had taken the time to explain these concepts outside of the confines of the game then it would have all clicked sooner. It wasn’t until these recent conversations that we decided to bring it back to the game table!

Each player begins the game with their own network, a starting actor and advertiser along with a starting show for each of the three prime time slots (8pm, 9pm and 10pm). Shows that are available for purchase have preferred time slots and can bump any of these starting ones into syndication. That’s the basis of the game. Buy a show, put your actors to work and coordinate advertisers. If a better show opportunity comes along, it can bump the existing one into syndication. Just like in real life. 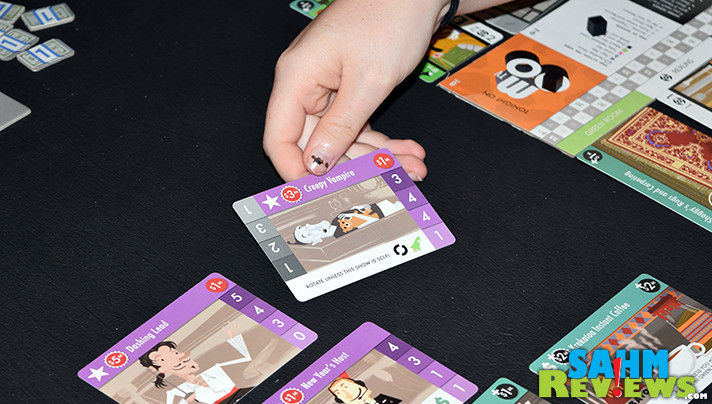 In turn order (which changes each round), you select one show, stars, advertisers or Network card to add to your inventory. You’ll have to pay to get the shows and stars, but taking on an advertiser means you’ll be paid. The amounts vary as do the benefits. There are requirements on some actors and stipulations on some shows. Some advertisers earn extra bonuses by being placed with specific actors or with a certain genre of show. Before making a purchase or committing to an advertisers, you’ll want to make sure you agree with the terms of the contract. 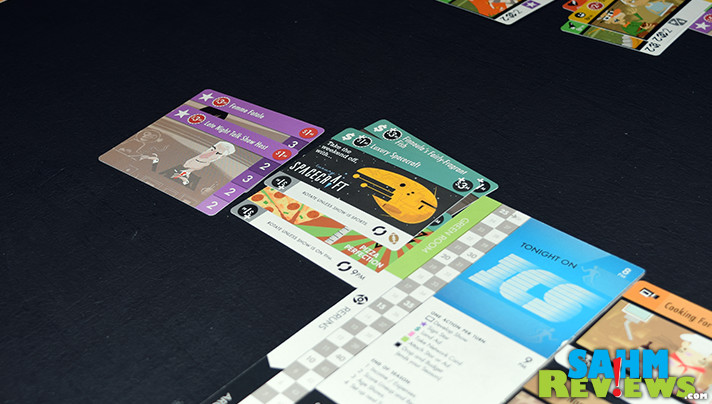 When you purchase an actor or agree to work with an advertiser, those items go into your green room as they await a show to be slotted with. Having a couple extra on hand doesn’t hurt as it allows you to find a good match when the shows randomly are added to the tableau to choose from. At any time you can take an action to add a star or advertiser to an existing show as long as it meets the requirements. 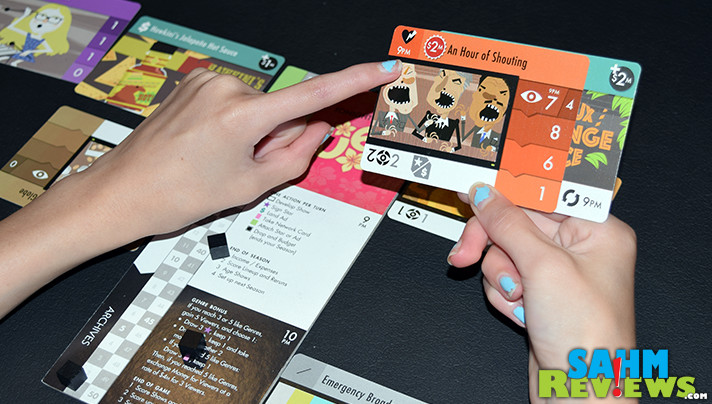 While advertisers are willing to pay you, they may limit how much based on what season the show is in. Or maybe there’s an actor you want but he only wants to work on shows of a certain genre. You don’t want to commit to a big actor or advertiser and attach it to a show that’s about to go into syndication or one that doesn’t meet the preferences. It’s a waste of money so you’ll want to have a plan before you take action. There’s a fine balance between waiting for the right time slot and grabbing it before your opponents do. 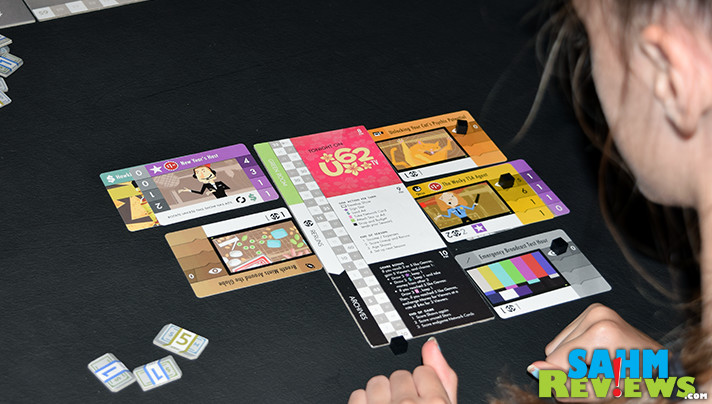 Next let’s talk about developing a show. That’s the meat of any network! Selecting a new show isn’t as easy as “Hey, that one looks fun.” When you make the purchase, it needs to be activated immediately (thus bumping whatever was already there.) Show cards display the preferred time slot, genre, initial development (purchase) cost, annual upkeep fee, viewer schedules by season, value as a rerun and the prerequisites to run it. Where you place the new show is up to you, but you’ll gain more viewers if you put it in its preferred slot so keep an eye on that when you’re show-shopping. You’ll have to make sure you can meet the requirements before purchasing it, too. As an example, if you don’t have the actor or advertiser that is required, you won’t be able to place it in your lineup. If it allows an advertisement or actor as optional and you don’t have them, you won’t be able to maximize the number of viewers or money the show could earn. Plus, you’re awarded bonuses for creating niches in your network. Bonuses kick in when you develop your 3rd and 5th shows from the same genre and can range from getting a free actor to selecting a Network card. 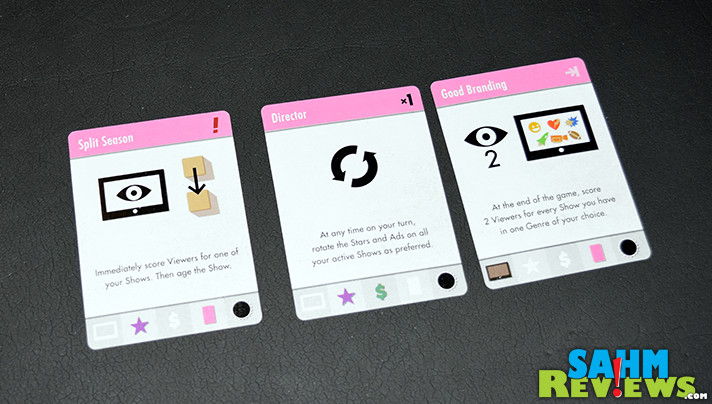 The final type of card you can grab is the Network card. Available starting in Season 2, these provide end-game bonuses and special abilities. Some cards get activated immediately while others can be held for future use. Examples include providing a flat bonus of money or the option to disregard some type of card requirement. 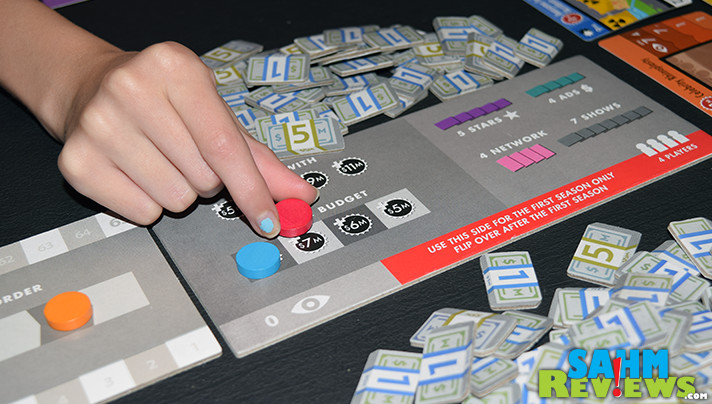 At any point in a season you can lock in your shows and call it a wrap. You’ll drop from the rotation of being able to draft advertisers, stars, shows and network cards and will no longer be able to attach new stars or advertisers to your current lineup. Instead, you’ll earn budget dollars and secure your place in next season’s turn order. If you are in need of a something particular to match with what’s waiting in your green room then being first when the new season starts is important. Of course, the longer you wait, the less budget you’ll receive to use for the next season.

After everyone has dropped out of the round, pay your expenses for stars and shows then collects income from advertisers. Finally, you’ll score your viewers based on how awesome you loaded your lineup and planned your reruns. Remember, viewers are the victory criteria so the goal isn’t income, it’s getting people to watch! When you first place your show, it awards the viewers from the Season 1 marker. If you opt to keep it around for another season, it earns the viewers displayed by the Season 2 marker. Some shows increase in popularity while others do well the first season then trail off. As you’re selecting your shows for development, that’s something to watch for.

Not only does The Networks game give perspective to how the industry works, but the cards are hilarious. It’s a hit with our game group not only for the game play but also for the humor value. You can pick up a copy of The Networks at your local game store or from Amazon for around $46. View the latest releases from Formal Ferret Games on their website or Facebook or follow designer, Gil Hova, on Twitter. Tune into Kickstarter tomorrow for the launch of the expansion, The Networks: Executives.

What show did you love that was cancelled?

5 comments on «The Networks Board Game Overview»