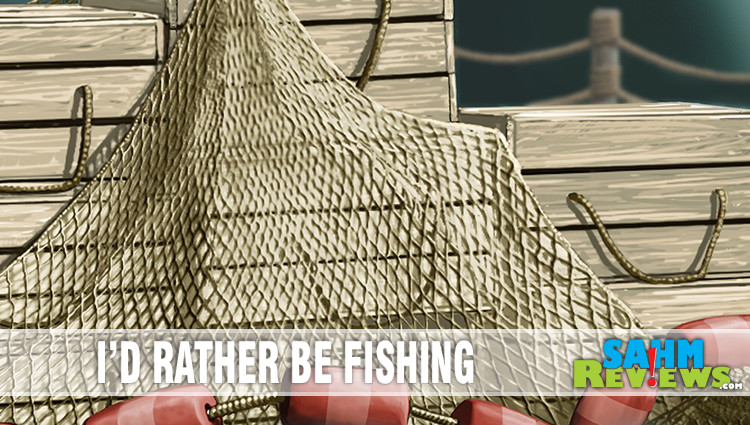 When we lived in Los Angeles, one of the places we loved to visit on a weekend was the Fisherman’s Wharf in San Pedro. If you got there around lunch time you’d see the boats bringing in the morning’s catch. They would stack the various species of fish in the fresh market where you could purchase your choice and carry them to another stand for cooking. They would perfectly dress and grill the fish with fresh vegetables and serve it to you on a plastic tray, ready to be eaten family-style. It was some of the best fish we’ve ever eaten.

It’s been over a decade since we moved back to the Midwest, but every once in a while something reminds us of San Pedro. This week it was playing the eighth game in the E•G•G Series by Eagle Gryphon Games, Fleet Wharfside, thanks to the theme of playing as fisherman trying to make the correct decisions about selling your catch. 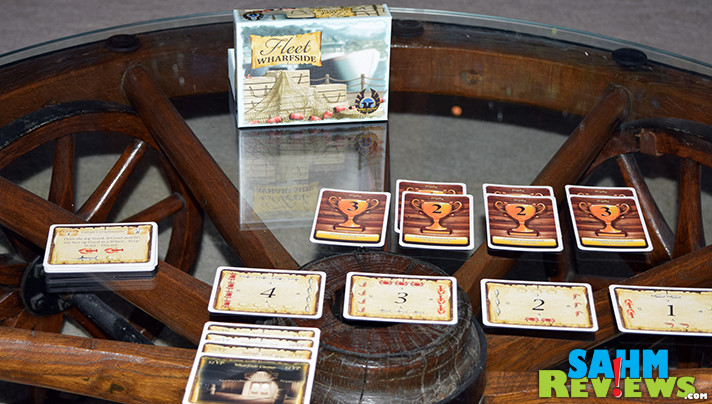 Fleet Wharfside is the next game in the E•G•G Series and is a card game designed to be played in 20-30 minutes. As mentioned, each player (up to four) is in charge of a fishing fleet fulfilling buyers’ contracts, trying to amass the greatest amount of profit. Everyone receives their own Captain card which gives them a custom goal to achieve during the game. 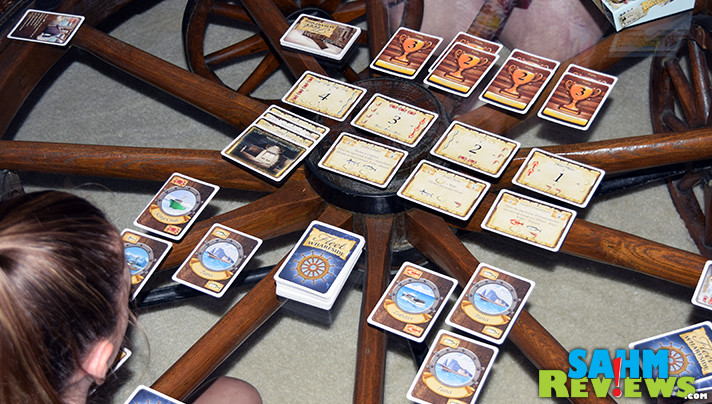 On your turn you have to choose one of two actions – either “Use the Wharf” or “Use the Market”. In the center of the table is the marketplace where you’ll find new contracts to commit to as well as buildings to construct. Costs vary depending upon their position in the market (stall #’s 1 through 4) and the values on the market signs pointing to the item for sale. 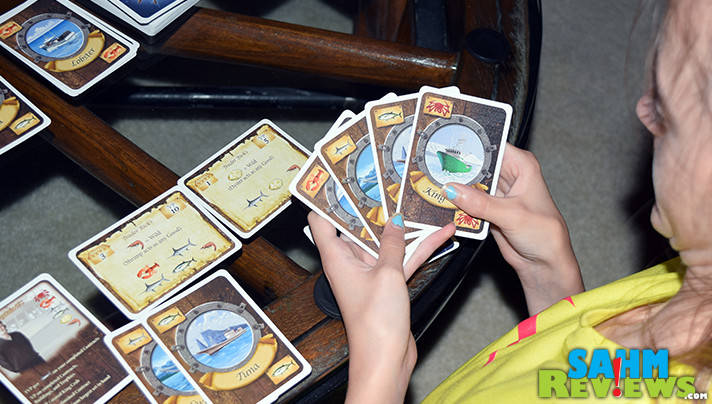 There is no money used in Fleet Wharfside – every transaction is conducted by paying with the only thing you have, fish! You can always overpay if needed. If something is priced at two tuna, you can pay with two of any more valuable fish (Lobster, etc.) or three of something lesser (Oysters, Shrimp). You’ll start the game with two randomly-dealt Goods, along with an open contract. 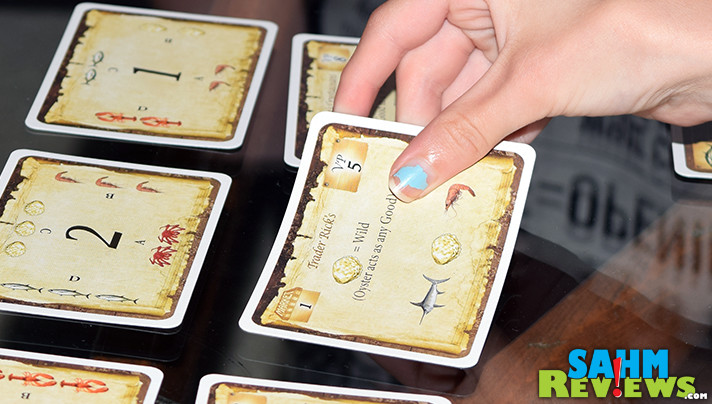 To “Use the Market”, you simply pay the listed cost on the market sign card and place that contract/building in front of you. This represents a contract you promise to fulfill and no other player may take it. Buildings are considered constructed immediately, but remain in front of you, counting towards a three-card limit. When a new contract is revealed, the newly dealt card will have a market number in the upper left corner. Rotate the market sign card matching this number – this sets the new price of the contract in that market. 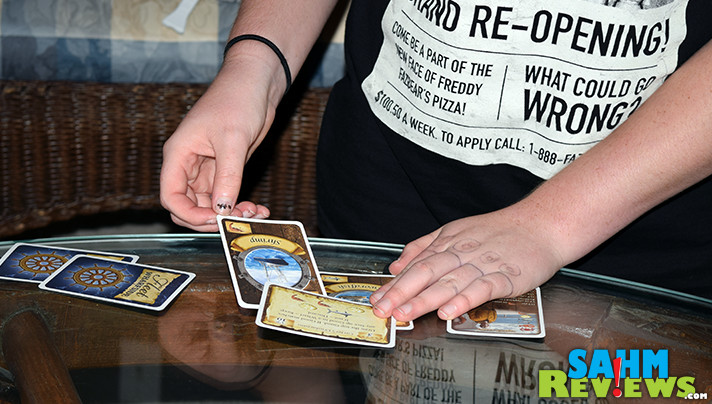 “Using the Wharf” is a bit more complex, and what you’ll do on most turns. You can take as many actions as you like while using the wharf, including using contract bonuses, allocating Goods to a contract, completing contracts and storing King Crab Goods. To end your turn in the wharf, you’ll select two Goods cards from either wharf (the cards are arranged in a “North” and “South” wharf), keeping in mind you’ll have a hand limit of six Goods cards. 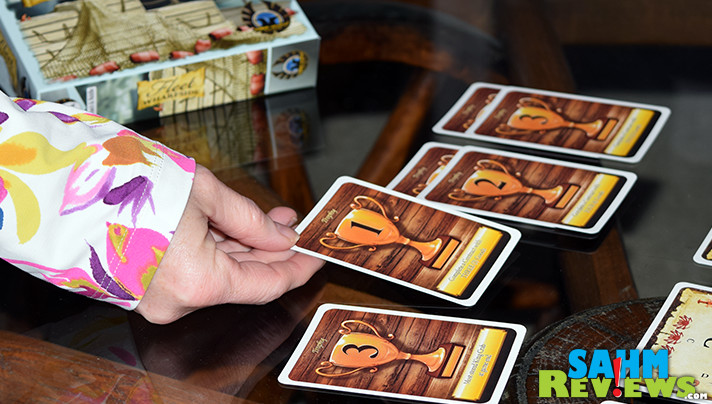 Contracts provide an ongoing bonus while not completed and are worth victory points at the end of the game if completed. Buildings are also worth VP, but provide no bonuses to players. Stored King Crab are worth a victory point each, as are completed contracts with a Goods symbol that matches your Captain. An additional point is awarded to each player for their largest set in their hand at game end (three points for having three of the same Good). The game ends when a player has completed a pre-determined number of contracts/buildings. 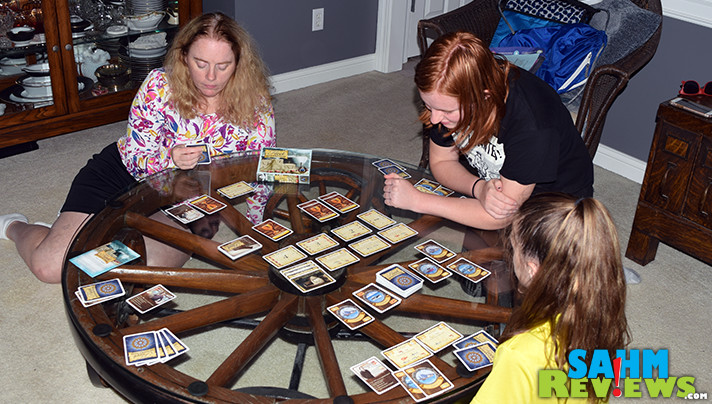 Fleet Wharfside utilizes many game mechanics seen in much larger games, but in a small travel-friendly box. Set collection, recipe-fulfillment and action selection are three you’ll experience in every session. Copies are almost sold out on Amazon for under $20, so the best deal is once again the full set on Eagle Gryphon’s website.

Have you ever visited a real fisherman’s wharf?