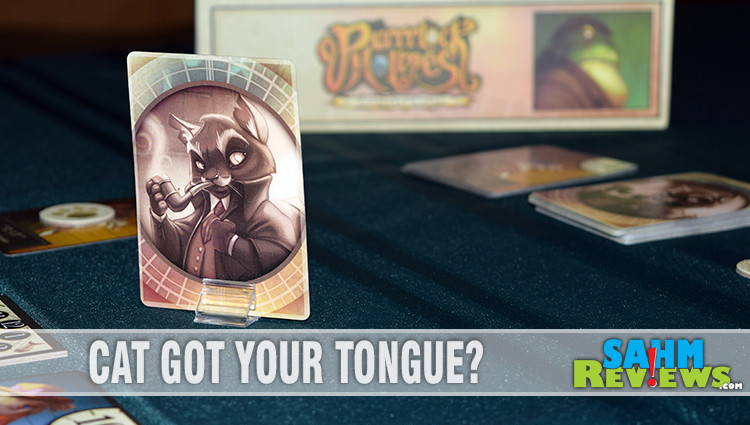 Playing board games is both emotionally soothing and energizing at the same time. In a time where so many people have their faces buried in screens, it’s nice to have them looking straight at you. No doubt we play our fair share of competitive games with all the trash talking that goes along with. But as you know, I’m (mostly) not a mean-spirited person so cooperative games continue to be one of my favorites. It’s an opportunity to work together to solve puzzles, defuse bombs, stop the spread of viruses or battle the bad guy utilizing everyone’s best ideas. 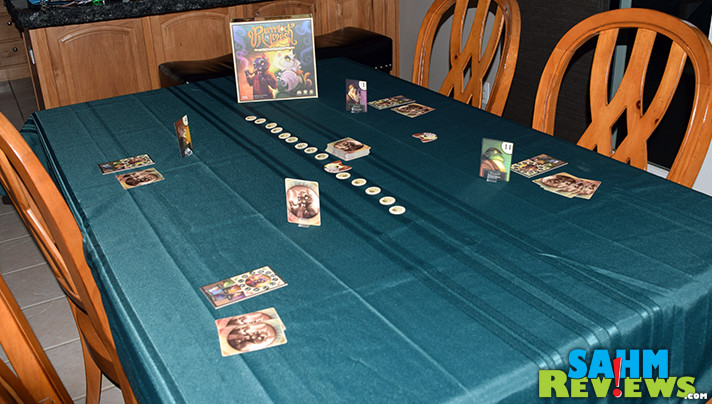 But IDW Games threw me for a loop with Purrrlock Holmes Furriarity’s Trail. It’s kind of a cooperative game, but kind of not. We’re helping the cat detective to solve the mystery (get it, Purrrlock?) but at the same time, if you solve the mystery only one person will be declared the winner. So which is more important losing all together or winning as a group with one player being able to claim the “Scotland Pound’s Chief Inspector” title?

I’ll vote for group win any day over losing. It’s simply a matter of perspective: All the Chicago Cubs won the World Series while only Ben Zobrist was the MVP. So you’re probably curious how a cat tracks down the infamous Furriarty that has been terrorizing London. You’ll use your powers of DogDucktive reasoning, of course! 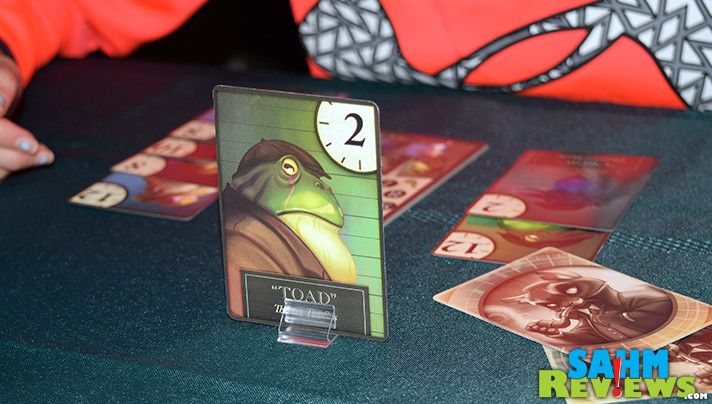 The goal of the game is to solve a designated number of investigations before Furriarty escapes. Every Inspector is provided with their own Investigation along with a handful of Clue cards. With a mechanic similar to Hanabi, each Inspector is relying on their partners to help them solve their investigation. In other words, everyone at the table can see the answer to your investigation except you. 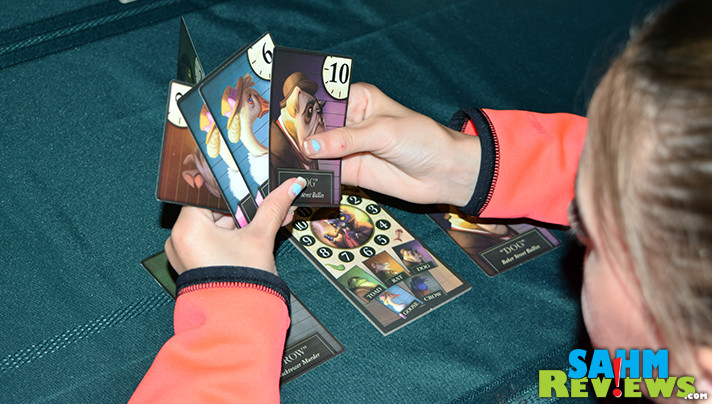 The investigations are actually cards randomly drawn from the Clue deck. Each Clue/Investigation card displays an hour and a suspect. Your turn will consist of two phases. The Action Phase and the Cleanup Phase. Begin by selecting 2 Clue cards from your hand and reveal them one at a time as your Investigate Action. Other players will look at the card and indicate one of two things: Lead or Dead End. 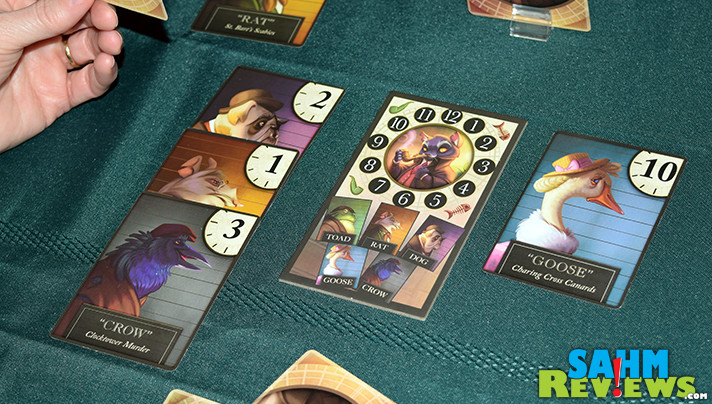 If they tell you it’s a lead, that means the character is a match, the time is a match or the time is within one hour on either side of your Investigation. Dead Ends mean none of those factors are true. If it’s a Lead, you place it next to the pipes on your player board and if it’s a Dead end, next to the fish bones. This will help you deduce the results of the Investigation card that is hidden from your view.

A second part is the Guess Action where you have the option to declare something about your Investigation. You can state that you know the Subject or the Hour or both. If you are correct on everything you declare, you’ll solve that Investigation and be awarded tokens: One if you only declared Subject OR Hour and got it correct; Two if you declared BOTH and got them BOTH correct. There’s a penalty if you are incorrect and I’ll get back to that in a minute. 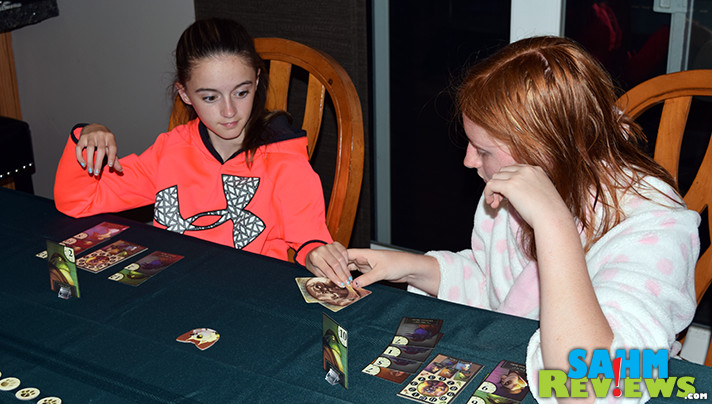 Next, there’s a Cleanup Phase. Pass the two cards remaining in your hand to the person on your left. Because you know what the other players Investigations are, you’ll want to consider passing cards that aid them in deciphering it. Sometimes it’s a difficult decision trying to figure out what to lay as part of your Investigate Action and what to pass as part of the Cleanup Phase. After you’ve passed the two Clue cards to your neighbor, you’ll draw two new ones to pre-populate your own hand. BUT, remember how I said there’s a penalty for declaring incorrectly during the Guess Phase? Well, if you went astray on your Investigation, you don’t earn the right to draw these new Clue cards! It puts you completely at the mercy of the person passing cards TO you. 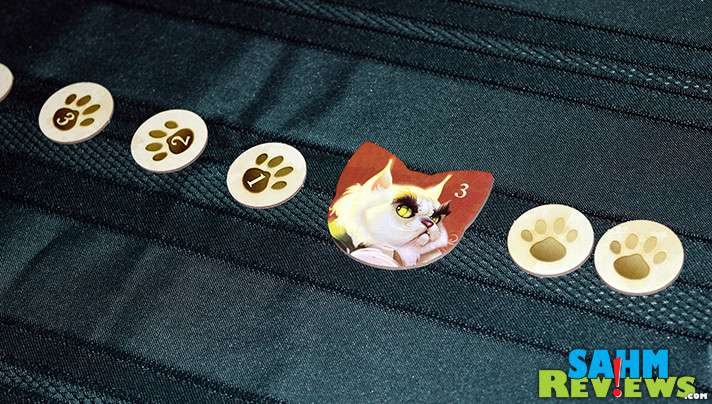 After each Investigator has taken a turn, the round ends and Furriarity takes one more step toward freedom. If Investigators solve enough to catch him on the trail, the game ends immediately. Once Furriarity has reached the end of the clue trail, each Investigator will have one last ditch effort to solve their Investigation before he gets away for good.

Not only does Purrrlock Holmes require a lot of deductive reasoning, but it also requires team coordination and attention to detail. If you’re up to the challenge, investigate IDW Games on Twitter and Facebook. You can pick up a copy of Purrrlock Holmes, Furriarty’s Trail on Amazon for around $22, direct from IDW Games or check with your local game retailer.

Are you a fan of Sherlock Holmes?