Did you happen to see the taboo words in this article’s title? Let me spell it out for you: M-E-M-O-R-Y G-A-M-E. Those are akin to curse words to these old ears. Like when my kids suggest playing a memory game, I want to tell them to go wash their mouth out with soap. They know I’m (usually) horrible at them which is probably why they thought playing a few rounds of Brainwaves with my mother-in-law would be a good idea. It’s not that they wanted an easy win. It’s because this line of memory games from Kosmos are dubbed as “the brain-training memory game”.

In my Memoarrr! game overview back in 2018, I specifically mentioned how memory games help the brain in the same way that games that include math aid in the development of math skills. But in the case of Brainwaves, it’s not simply a comment or claim to help it sell. There’s research behind it! Brainwaves was the focus of a scientific study by neuroscientists at the University of Ulm, Germany. The result: The Brainwaves series of games place demands on three brain functions (logical thinking, working memory and long-term memory). More specifics of the study are included in every rule book. (See page 10 in The Brilliant Boar rule book as an example.) There are three games available, but I’m providing some details on how to play The Wise Whale to give you an idea how easy these games are to learn! 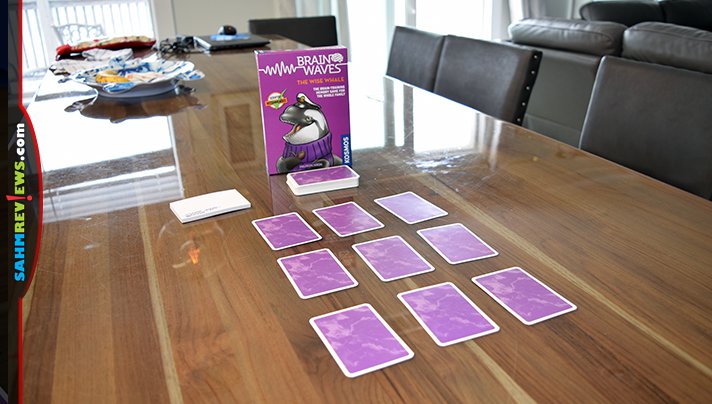 Each of the titles in the Brainwaves memory game series is a little different. The Wise Whale might remind you a bit like concentration, but keep reading to see how this isn’t a simple matching game. You’ll be constantly changing what you’re trying to remembering. There are seven different animal designs along with seven colors. Begin by determining your difficulty level by including 5 (Rookie), 6 (Experienced) or 7 (Advanced) animal designs and colors. If you select Rookie then you’ll select five animal designs in five colors. The more you include, the more difficult it will be. Shuffle the selected cards together to form a deck then create a 3×3 grid with the remaining forming a draw deck. 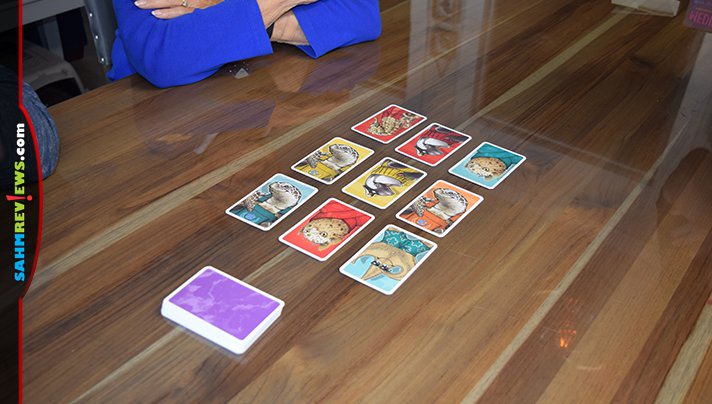 You’ll start by turning all cards face up and allowing all players equal time to examine the cards. It’s recommended that you use about two minutes, but everyone can indicate when they are ready and you may find it’s much quicker than that. Once the time is up or all players are ready, flip the grid back face down making sure to keep everything in the same place! 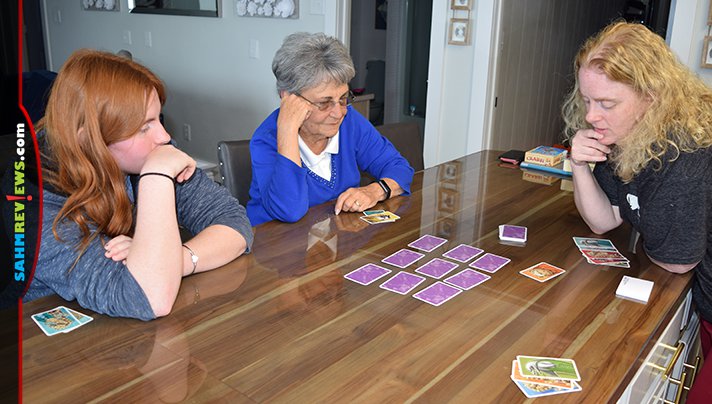 On your turn, you’ll reveal the top card from the draw deck. You are trying to find a match for either the animal design or the color of the card you just drew. 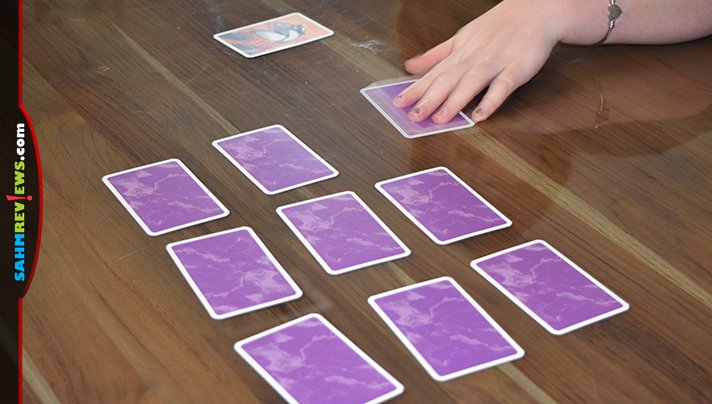 Select ONE card from the grid and flip it over. If you’ve matched one of the two then you collect that card. If you’re incorrect then the grid card you flipped is added to the bottom of the draw deck and replaced with the one you just drew. This means the grid will change after every turn so you need to constantly be attentive to the game. Your turn is over and play passes clockwise to the next person. 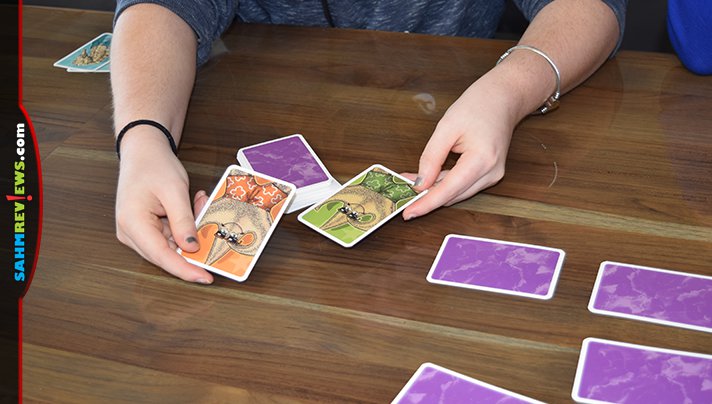 If you’re correct, however, then you collect the grid card you flipped which will be used for scoring at the end of the game. The card from the draw deck takes its place in the grid. As a bonus for being correct, you get another turn – up to three total if you’re able to continue guessing correctly. 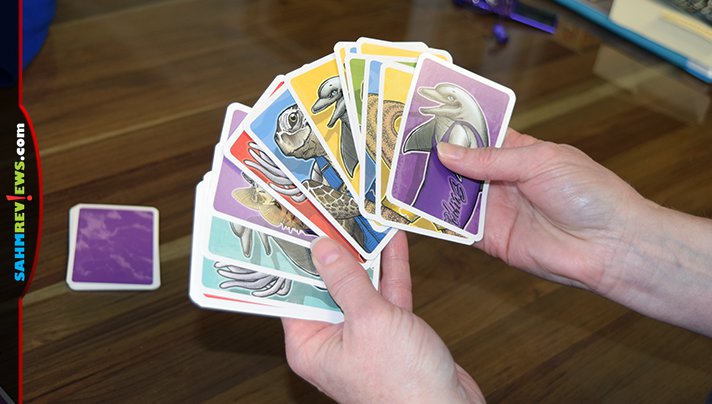 After the entire draw deck has been depleted, the game ends. This happens when the second to the last card is added to the grid and the final card is used by a player to match. Count the number of cards you collected and the player with the most wins Brainwaves: The Wise Whale. There is a die included with the game that creates a variant of the original to mix things up a bit. Trying to remember what is where can be challenging, but I know I felt a sense of accomplishment every time I got one right!

In Brainwaves: The Brilliant Boar, there isn’t a grid. Instead, there is a face-up deck in the center of the table. There are two possible actions to take. You may opt to select that card and add it to your hand. But instead of being able to see the cards in your hand, once you’ve selected and studied them, they are turned away from you much like in Hanabi or Purrrlock Holmes. As an alternate action, you may select a card from your hand and try to match it with the one on the draw deck (or another that is face-up on the table). You’ll take turns trying to match cards from your hand of blind cards and collect cards that you match correctly.

You’ll tax your memory skills in a different way with Brainwaves: The Astute Goose. There’s a police lineup facedown in the center of the table and you’ll roll dice to tell you what you’re supposed to identify on a specific card in the row. It may be a clothing type, a clothing color or an animal companion. As with The Wise Whale, the available cards continue to be altered as players correctly make guesses and claim them for scoring. These constant changes are what makes the Brainwaves memory games different from many others of this genre.

Not only do these games have wellness benefits, but they are also fun. If you are looking for games that allow you to incorporate multiple generations, this is a series to try. All three of these Brainwaves memory games are good for 1-4 players, only take about 15 minutes and are available on Amazon, direct from Kosmos or at your local retailer. We hope to see additional Brainwaves titles released since there are so many benefits to playing this type of game which welcome such a wide range of ages. You can do like us and keep in touch with Kosmos on Twitter and Facebook to learn about the many other games they’ll be releasing this year!

Which people do you think would benefit most from playing Brainwaves?