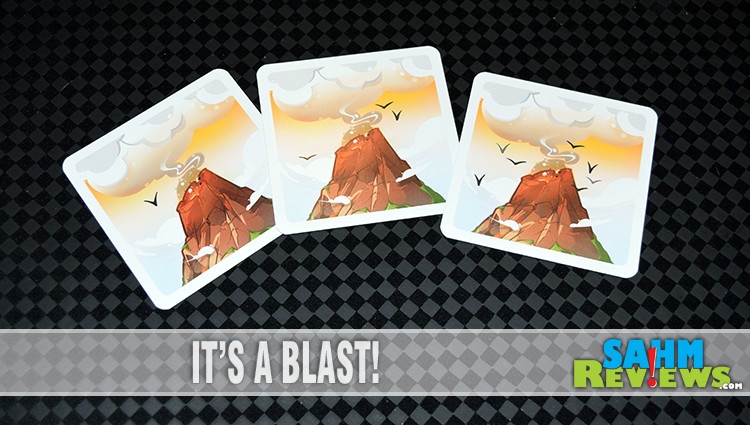 You’ve heard me complain a time or two about how horrible I am at games of speed as well as ones that rely on my aging memory. I’ve also fully admitted that I go into them with the intention of losing and anything better than last is considered a win in my book. Or in some cases, I consider it a win when I actually remember something! I like to believe that even though I don’t fare as well as I did in my younger days, that these types of games help strengthen my abilities in the same way that games that include math help strengthen math skills.

Every once in a while we come across a game that kind of breaks the mold in what we consider a typical type of that particular genre. After playing Memoarrr! from Stronghold Games at Geekway to the West, I realized it does exactly that. Yes, it’s a memory game, but there are more layers to it that make it feel like anyone has a fighting chance at winning. I’m guessing you’re shaking your head in disbelief right now. I’ll be honest and say I was right there with you in dissent until I actually played the game!

Ready for the really complex set-up process? Shuffle all the cards and lay them out face-down in a 5×5 grid. Without revealing what it is, remove the center card and place it in the box. In the empty center spot, you’ll place the shuffled stack of Treasure cards along with up to three Volcano cards (one less than the number of players). Memoarrr! plays up to four people and lasts a very quick seven rounds.

The cards each depict one of five different animals in one of five landscapes. In the base game, all the creatures are equal, but each has an ability in an advanced game. You’ll find a Penguin, Octopus, Walrus, Crab and Turtle hanging out in the sand, by the ocean, in a jungle, surrounded by lava or amidst the flowers. There are no duplicates but the goal is to find cards that connect by remembering what you’ve seen before. Memory… arrr! 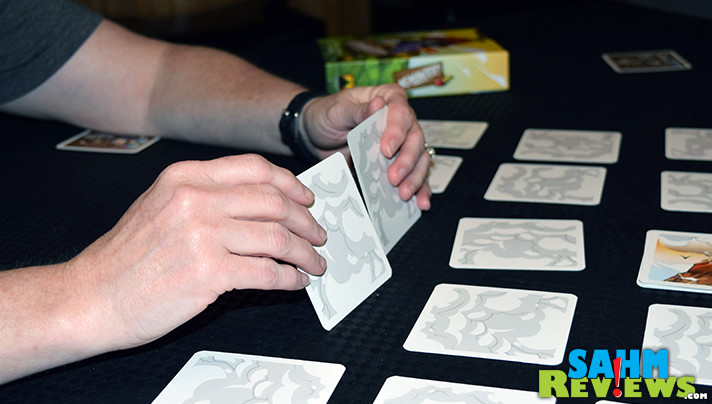 To begin the game, each player is allowed to peek at the three middle of the outer row in front of them. As I mentioned, this is a memory game so this “head start” is pretty important. Until they are revealed, they might help you find something others cannot – or at least narrow down your selections when you’re trying to find something else. 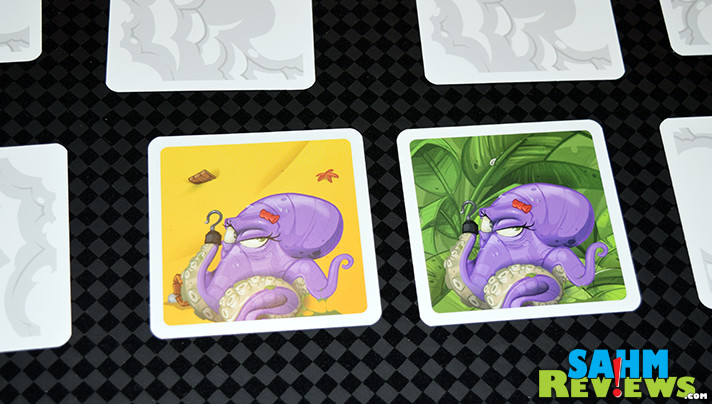 The first player begins by selecting a card other than one of their secret three. That card remains face up until the end of the round. The next player needs to locate a card with either a matching animal or a similar landscape. They reveal a card and if they’ve found one that is connected, they’ve passed and turn moves to the next person. If they’re unsuccessful, they take the top volcano card off the stack and are out of the round. Regardless what card the player before you revealed, it’s your job to find a connection from the remaining face-down cards. Good luck with that because… memory… arrr! 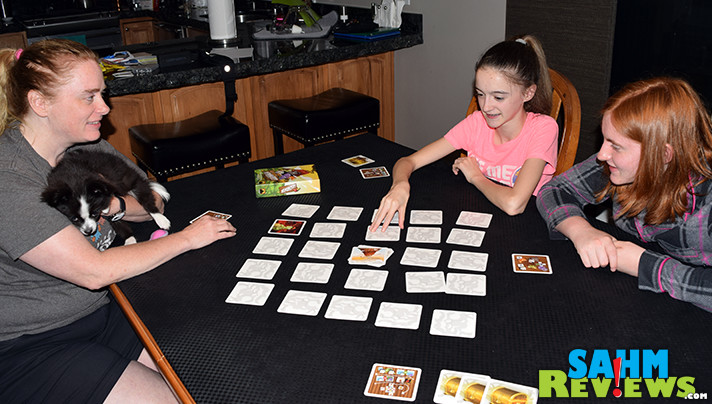 After all but one player has been eliminated from the round, the round’s winner draws a Treasure card. The player with the most birds displayed on their Volcano card becomes then first player for the next round. All cards remain in the same place and are flipped image side down.

The next round proceeds in the same manner with the round’s winner drawing a treasure card, the person with the most birds on their Volcano card going first and the cards being flipped image side down again. This process is the same through the course of seven rounds. At the end of the final round, everyone reveals their Treasure cards and counts the number of rubies they’ve acquired. The person with the most is the winner. 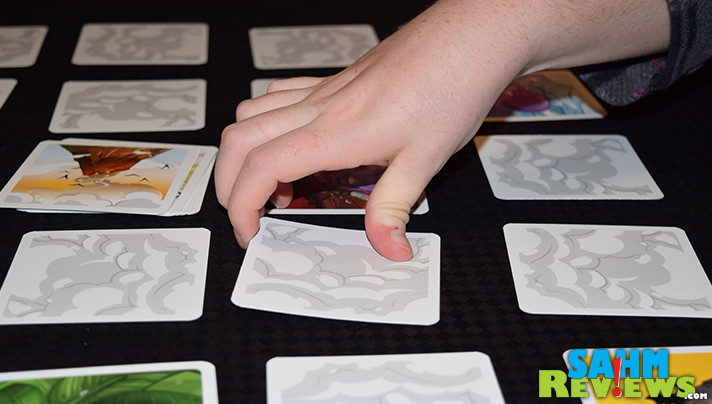 Unlike most memory games, you’ll likely discover that you’re remembering what’s where as the cards don’t change from round to round. Even when I was knocked out of a round, I realized I was remembering more and more of the board! As you start feeling confident with the play style, you can up the ante by implementing the advanced rules. When you do this, you must activate the abilities depicted on the card you just revealed. With a Penguin, you’ll secretly look at any unrevealed Location card then put it back in place. An Octopus means you’ll exchange the card with an orthogonally adjacent card without looking at it! A Walrus allows you to touch any location you want to keep hidden which means the next player is not allowed to select it. The Crab means you must immediately take another turn. Finally, there’s the Turtle. When you reveal the Turtle, nothing happens. These changes can add additional flavor and uncertainty to the game.

While I normally wouldn’t put a memory game on the top of my wish list, Memoarrr! from Stronghold Games gives me confidence to play this type of game. There’s just enough going on to keep it interesting but not so much chaos to cause someone with memory issues to run from the table screaming. If you are ready to test your skills, you can pick up a copy of Memoarrr! on Amazon for under $15 or direct from Stronghold Games.. Find out what else Stronghold Games is revealing by tuning in to their Facebook and Twitter channels.

Do you struggle when playing memory games?