For the past few years my wife has hung a bird feeder or two in our trees year-round. We’ve lost count of how many different species we’ve spotted, including a number of different hummingbirds at their dedicated feeder. Even during February we can count on being able to look out the window and gaze upon the birds that are crazy enough to weather an Iowa winter.

And every spring we encounter the same things. First it is the onslaught of starlings that scare away all the prettier birds. Then the inevitable noises in the middle of the night – raccoons! Roaming in packs of 2-4, they climb up on our deck and jump onto one feeder that will fall if it is spun just right. The next morning we are tasked with cleaning up about five pound of sunflower seeds and reassembling the damaged feeder.

If you’ve ever had raccoons, you know they can be cute. But they get into everything, especially garbage cans. Around here we call them trash pandas. I always assumed it was a regional name or even something my parents made up so we wouldn’t be as afraid of them. It turns out we’re not the only ones that call them that! Red Rook Games conducted a successful Indiegogo campaign last year for their new card & dice game by the same name, Trash Pandas! 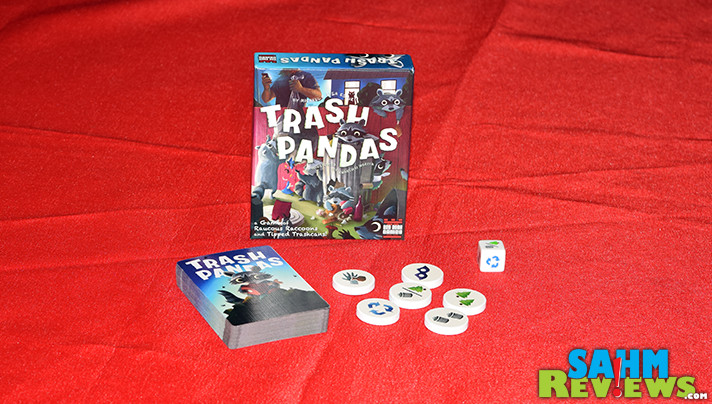 Trash Pandas is a quick push-your-luck game for up to four players that can be played in about 15 minutes. Included in the box is a deck of beautifully illustrated cards, six wooden tokens with stickers and a custom 6-sided die. The tokens and the die are placed in the center of the table while first player is determined. That person is dealt two cards from the deck, with each successive player receiving one more than the previous player. 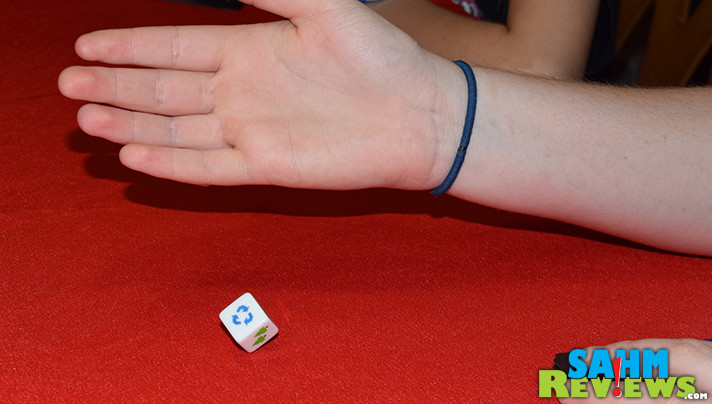 You start your turn by rolling the die and taking a token that matches your result. Then you must decide whether or not to roll again. If you do and successfully roll a new symbol (there is a different one on each die face), then you will take the token that matches that last roll and you’ll decide whether to continue again. You can continue rolling until you have all six tokens or you roll a symbol that you’ve previously rolled. If you do the latter, then you bust and must return all the tokens and draw a card into your hand as a consolation. 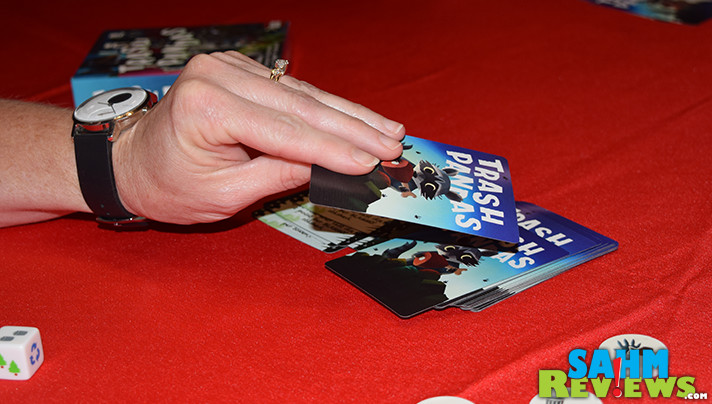 If you stopped without busting, you may now resolve the effects of your tokens in any order. These range from stealing cards from another player to stashing a card from your hand into a personal stash. Ultimately that’s the goal of Trash Pandas, to stash away cards that will score at the end of the game. But without tokens, you won’t be able to, so don’t push your luck too far! 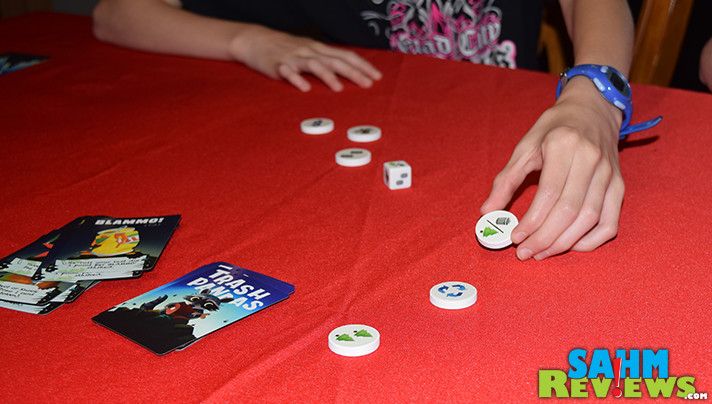 Instead of using them for stashing, you can also use the actions on the cards in your hand and discard them. Some are used on your turn that allow you to re-roll the die, draw additional cards or resolve a token twice! Others are used as defense when other players try to steal from you or force you to continue rolling when you’d prefer to stop. It will always be a careful balance on whether to use the card’s action or try to stash it away for later scoring! 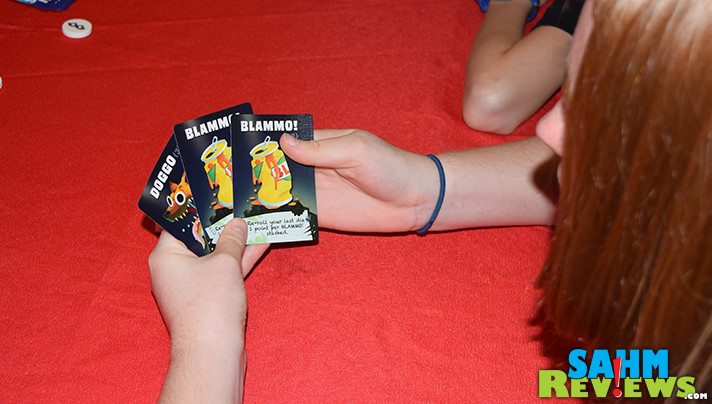 Once the last card is drawn from the stack, the game ends immediately at the end of that player’s turn. Everyone reveals the contents of the stash and arranges them by type. “Blammo” cards are worth one point each, with the rest (except “Doggo” and “Kitteh” cards, which are worth zero) counted to determine how many a person has in their stash. The player with the most of a type receives the first place points listed on the card. If there are points for second and/or third listed, those players receive their points. This is done for each card type and the player with the highest total score wins Trash Pandas! 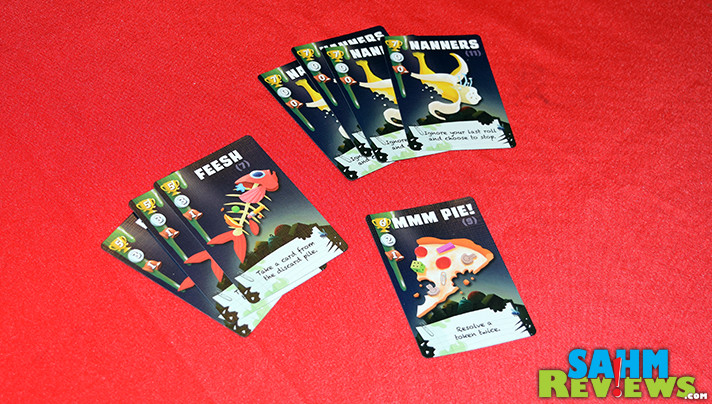 We found Trash Pandas to be an adorable card game appropriate for all ages 8+. The cutely-named cards (Doggo, Kitteh, Feesh, Nanners, etc.) will spur fun conversation and the illustrations are family-friendly and professionally done. Not only were we impressed by the product put out by Red Rook Games, so was Gamewright Games! They just picked up the rights to publish Trash Pandas under their brand, meaning you’ll see it in many more game stores and maybe even your local big box retailer! But until then you can pick up your own copy of Trash Pandas on Amazon for only $12 plus shipping. You can also pre-order the Gamewright version for $12.99 and Amazon will notify you when it is ready to ship! 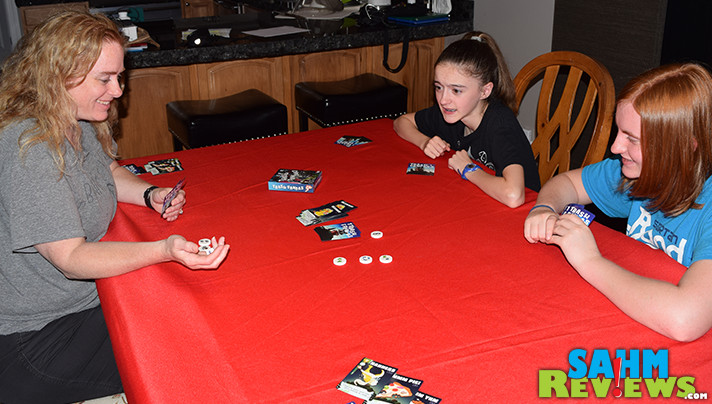 Red Rook Games is a relative newcomer to the game world, but has a couple things in the works. Check out their website for details on a western-themed euro they’re developing and follow them on Facebook and Twitter for their latest news!

Had you ever heard the term “Trash Pandas” to describe raccoons?