Now that our kitchen table has been cleaned up from our 3000 piece puzzle marathon, we can begin using it for what we normally do. While it is a place for family mealtime, its primary use for the past few years is playing games! We even made a custom neoprene-based play mat to upgrade the playing experience that fits the table perfectly. It is especially useful when playing dice-centric games, like Titan Dice by Eagle-Gryphon Games, since it softens the sounds of dice hitting the table and slows their roll. 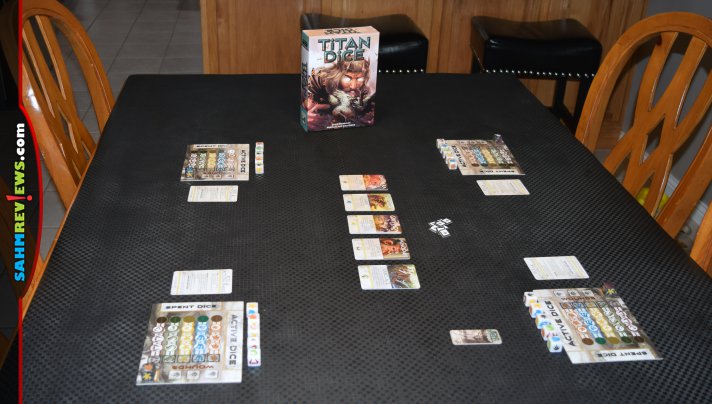 Titan Dice is a quick 15-30 minute push-your-luck dice game where you are one of the escaped Titans trying to capture mythical creatures in order to overthrow the gods. Each player begins the game with five regular dice, a player board, player aid card, creature markers and one bonus die. You’ll begin the game with one of each creature type, which are tracked on your player board. The goal of Titan Dice is to be the first to cage three of the five creature types by collecting four of each. Sort the creature cards into individual stacks, ordered from lowest to highest. These are placed in the center of the playing area.

Each of your turns in Titan Dice is made up of two phases. First you’ll roll all of your regular dice and place them in the Active Dice area of your player board. Any wound symbols (bad) are set to the side of the board in the designated area. Collect three wounds during your turn and you’re done. If you’re lucky enough to roll one of each creature type, you can immediately collect one of each by moving your creature markers on your player board. This would end your turn immediately.

Next, you must decide how to spend your dice. You may purchase a creature card by spending two matching dice of that particular creature. You can also elect to spend your previously-caught creatures as if they were dice by moving the corresponding marker to the left. You can never have two creature cards of the same type, so you may exchange one for another in the center of the table or with another player. The cost is still the same, but it allows you to upgrade or downgrade cards to have access to their abilities. 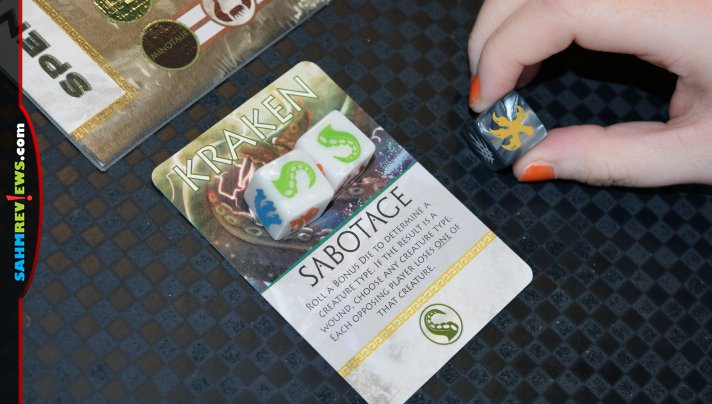 Your last option for spending the dice is to activate the ability of a creature card you own. Again, the cost is the same and you must be able to carry out the ability in full. These range from allowing you to manipulate your dice roll results, collect extra creatures at a lower cost or roll your bonus die and resolve the results, depending on the creature. 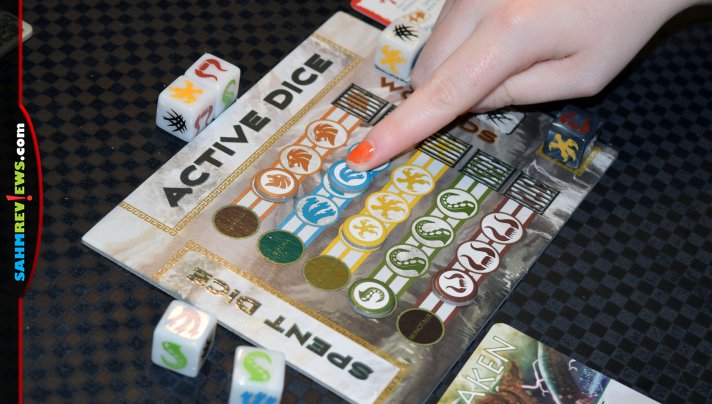 Any time after your roll each turn, you have the option of capturing creatures. Choose one creature type that is in your active dice pool and move the marker to the right one space for each die you are spending. Just like gaining three wounds, this also ends your participation in the round. All dice spent in this manner, or for the actions listed previously, are sent to the spent dice pool where they’ll remain until the next round.

Once you go out of a round by having three or more wounds or by capturing a creature, you’ll go into attack phase for the rest of the round. On your turn you’ll roll all five of your regular dice. You may set aside any you want to keep and re-roll one more time. If you roll three or more of a creature type or wound icons, you’ll carry out that attack action against ALL players who are still participating in the current round! The corresponding actions are listed on the reverse of the player aid card.

When a player has caged three creature types, the end of the game is triggered. Finish the current round of play and total up scores. You’ll receive points for each creature collected and for each creature icon on collected creature cards. The player with the highest total wins Titan Dice! If there is a tie, the person who was later in turn order is given the win.

What table do you take over for game nights?