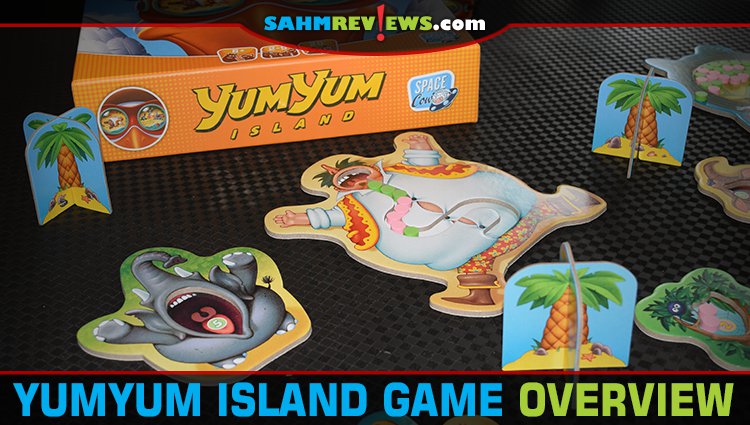 Last week marked a milestone for me as I turned 50. Yes, my body and mind like to remind me that I’m old, but my heart feels like I’m much younger. I don’t feel 50 and have memories of my younger days that feel like they weren’t that long ago. Occasionally, something will happen and it will dredge up an old memory that I had long forgotten. As I read over the instructions for a game recently, I could vaguely recall a game I played as a kid. I couldn’t remember much about it except that you hovered above and dropped something down. After some time and searching, I realized it must have been Chutes Away. 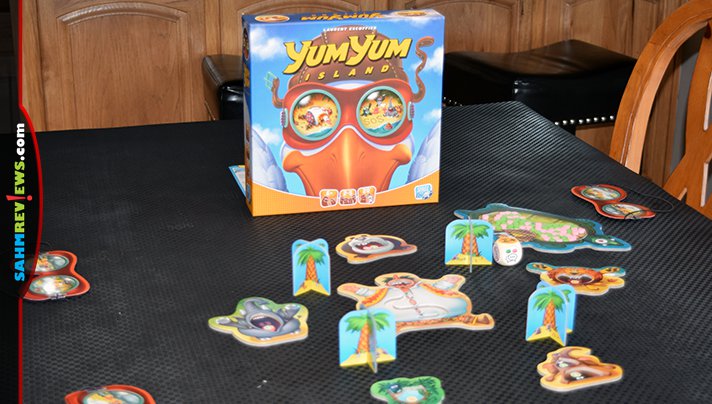 But as you could guess from the title, this article isn’t about Chutes Away but rather Yum Yum Island from Space Cow, an imprint from Space Cowboys focusing on games for younger kids. Yum Yum Island is a cooperative game for ages six and up where you’re trying to air drop food to the animals on the island. To set up the game, place the giant in the center of the table and one tree next to each hand and foot. The giant turtle goes to the first player along with the die. The food tokens are then loaded onto the turtle’s back. Five animals (either random or specific based on how many times you’ve played) mill around the outer area beyond the trees. Each player takes a set of aviator goggles which will be used when you are the active player.

You’ll alternate who the first player is, rotating clockwise after each turn. Each animal’s mouth displays a number and color which relates to the type of food they require. Pink tokens are meat, fish and insects while green ones are grass, leaves, vegetables and fruits. If you’re able to meet their food requirements, then you’ll be able to rescue the animal. Sounds easy enough… now I’ll remind you that the game involves blindfolds! 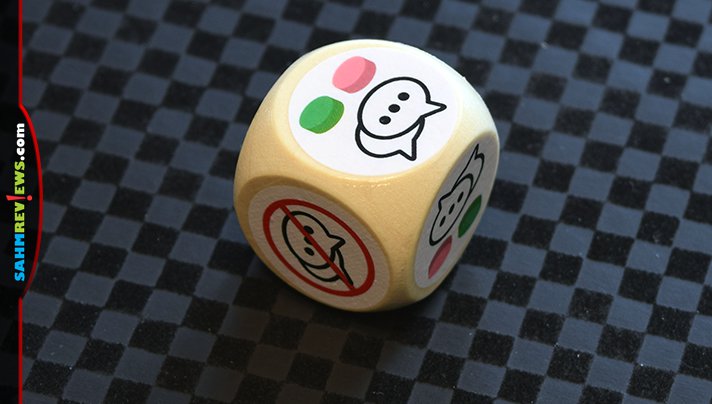 When you’re the squadron leader, roll the die and examine the results. If it shows one pink food token, one green food token and a speech bubble then you’ll take one of each of the food tokens and place them in the giant’s throat. The speech bubble means your teammates will be able to help direct you to feed the animals while you are flying blind! A crossed off speech bubble means you’re on your own. A picture of an island with an arrow means you may rescue an animal that has been fed at least once, even if they haven’t received their full food requirement. Then turn the die to the side the arrow points and implement that die result also. 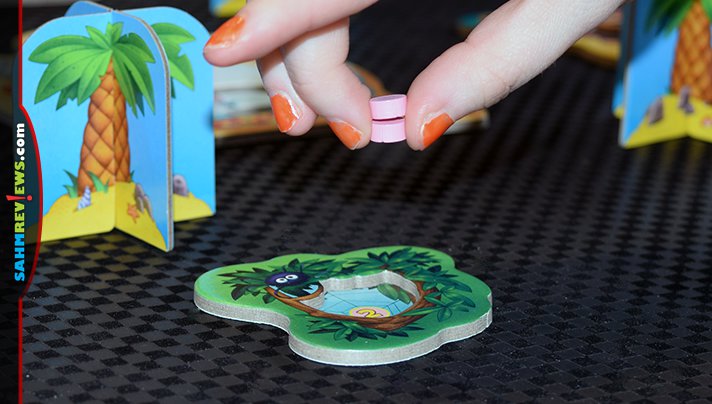 To feed the animals, you need to air drop the food from the air. After evaluating the results of the die, put on your goggles and get ready to take off. You’ll reach onto the turtle’s back and pick up at least one food. If you take more than one, you’ll put them in a stack before lifting them into the air. Using instructions from your team or winging it without them, fly over an animal and drop the food. If it stays in the mouth, it’s a successful air drop. If any land on the outside the mouth or anywhere else on the table, the giant gets them! 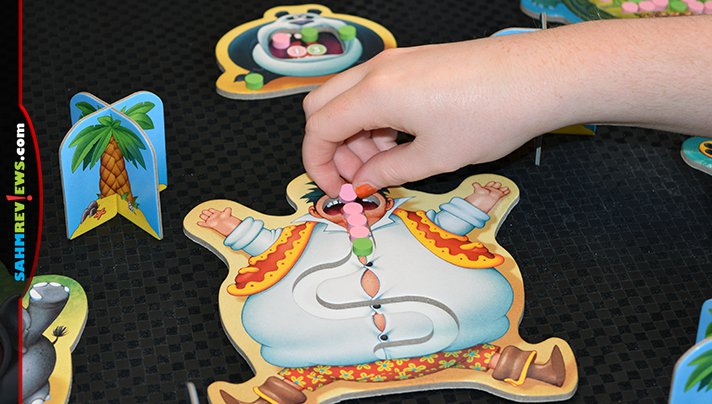 To make it even more difficult, if you feed an animal something it doesn’t like, it spits it all back up and the giant gets it all! While the trees can offer some landmark guidance, if you knock them over they’re removed from the game. 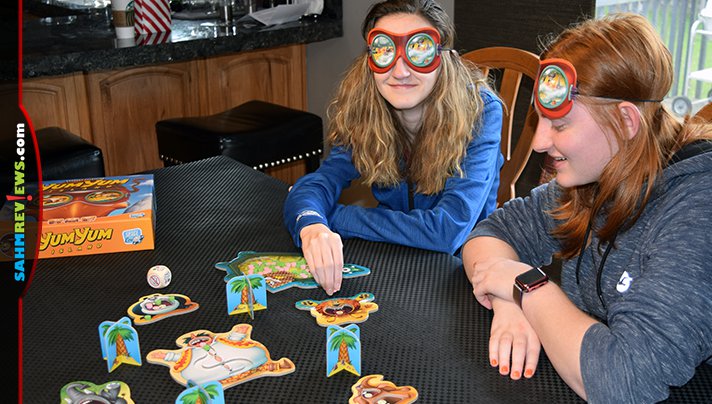 Yum Yum Island continues until either all the animals have been rescued (you win) or the giant is full (you lose). Different animals have special abilities which is why you’ll adjust which animals depending on how experienced you are. You can also increase the number of animals to feed to make it even more difficult! If you’re ready to gather your team to rescue the animals, grab a copy of Yum Yum Island from Amazon. Cooperative games are such a great way to get young kids involved as well as hone communication skills so I encourage you to find games that are fun and engaging with bonus benefits like this! Fly over to Facebook and Twitter to see what other ideas they’re dropping!

What’s your favorite cooperative game to play with young kids?