Has anyone besides me lost track of time? As an example, I’ll be in a conversation and say something like, “We watched that last week.” or “The other day we were talking about (whatever topic).” Then Scott will chime in and remind me that it was actually like three weeks ago or more. Seriously, time is running together and I need to start keeping a journal. On second thought, that journal would be pretty boring… “Dear Diary. Today we stayed home, worked on the website, played board games and watched TV.” The next day it would say, “Dear Diary. Same as yesterday.” If you’re wondering why I’m blathering on about loss of time, it’s because I realized how off kilter I am with the calendar. I (originally) started this article with a statement about recent city-building games we had written about including Zoned Out (last week), a couple weeks prior was Tiny Towns (actually, May) and a month or so ago was Penny Lane (but really, April). So let’s just start from scratch and talk about The City from Eagle-Gryphon Games like we haven’t told you about a city-building game in a while. 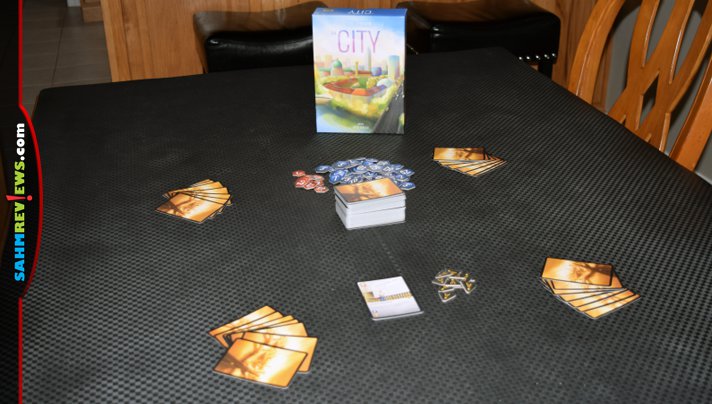 #21 in Eagle-Gryphon Games’ Bookshelf Series, The City is a quick city-building game for two to five players where everyone is racing to be the first to develop a city filled with shopping centers, businesses, housing tracts and more. The game consists of cards, survey markers and victory point chips. Select enough General Contractor cards to coincide with the number of players and place those in the center of the table, returning the remainder to the box. Shuffle the rest of the cards then deal seven to each player with the rest being used as a draw deck. Create a general supply of victory point tokens and survey markers. Review your hand of cards, select five then discard the other two face-down into a pile next to the draw deck. 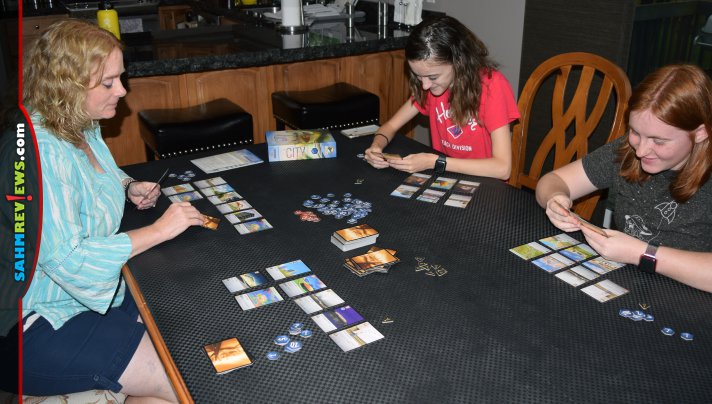 A game of The City will continue until one player has 50 or more points, typically around 7 or 8 rounds. Play is more or less simultaneous for each round since the actions don’t impact one another. Over the course of the game you will be adding cards from your hand into your personal tableau. 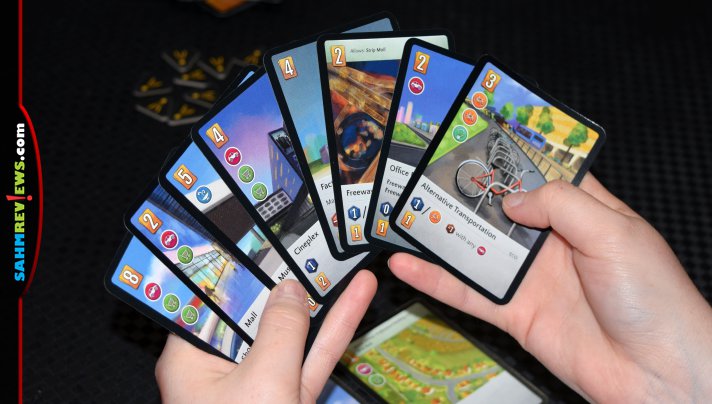 Each card shows the cost in the upper left corner, icons for the type of building it is, the name, victory points and income. In addition, you may see text regarding requirements, restrictions or benefits. To begin a round, look through your available cards and do one of two things. Either opt to survey or select one card from your hand and place it face down in front of you. When you survey, you take a Survey marker and place it in your tableau to show the action you’re taking for this round. You’ll then draw five cards into your hand then discard four. 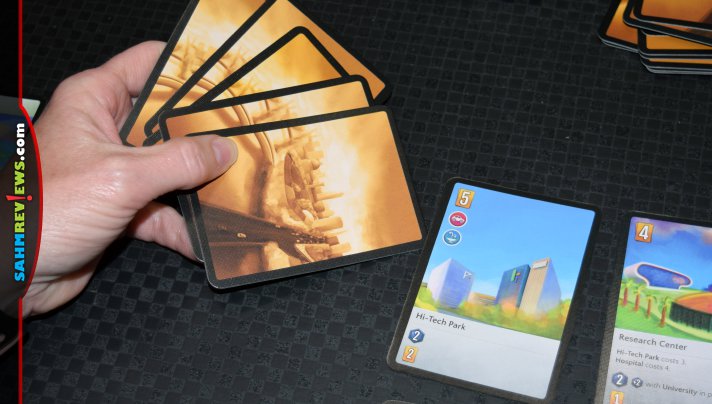 After everyone has selected a card (excluding the surveyors), all the cards are revealed. Players simultaneously pay the cost by discarding the number of cards noted in the upper left corner of the card they are playing. If you do not have enough cards to pay for the action, you cannot select that card to build. Some cards offer a discount for others of a specific title or type so if you own those, be sure to take those discounts during payment. 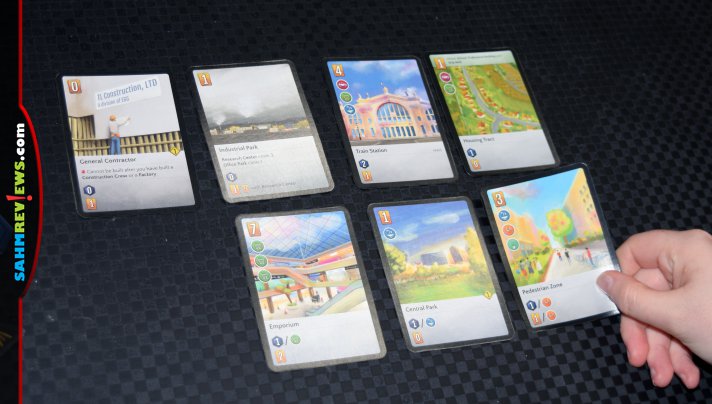 Add the new building to your city then collect victory points as noted on ALL the cards in your city. It’s helpful to combo cards together to maximize points. As an example, some cards will give you additional victory points for each of a type of icon in your city or if another specific card is in play. If nobody has reached 50 victory points, then you’ll collect income by drawing that many cards into your hand. Discard down to a hand limit of 12 then begin another round.

Once during the game, you may hire the General Contractor in lieu of surveying or placing a card. You may only do this once and only if you haven’t built a building that prevents it. In addition, look for the caution sign on the card to indicate other cards that are limited to one.

The game is over as soon as someone reaches 50 victory points. If more than one person reaches that goal in the same round, the person with the most points wins. While you’re playing against other people, you aren’t getting in the way of each other. It makes it more family-friendly than a city builder like Flip City because an adult can help a younger player make decisions within damaging their own game play. Copies of The City are available on Amazon or direct from Eagle-Gryphon Games. You can also ask about availability at your local game store. Find more information about upcoming titles by visiting them on Facebook and Twitter. Be sure to read our many articles about Eagle-Gryphon titles in the Bookshelf Series (such as Xenon Profiteer, Titan Dice, Fleet Dice) as well as the E.G.G. Series!

Would you replace decorative books with a number game series like this?